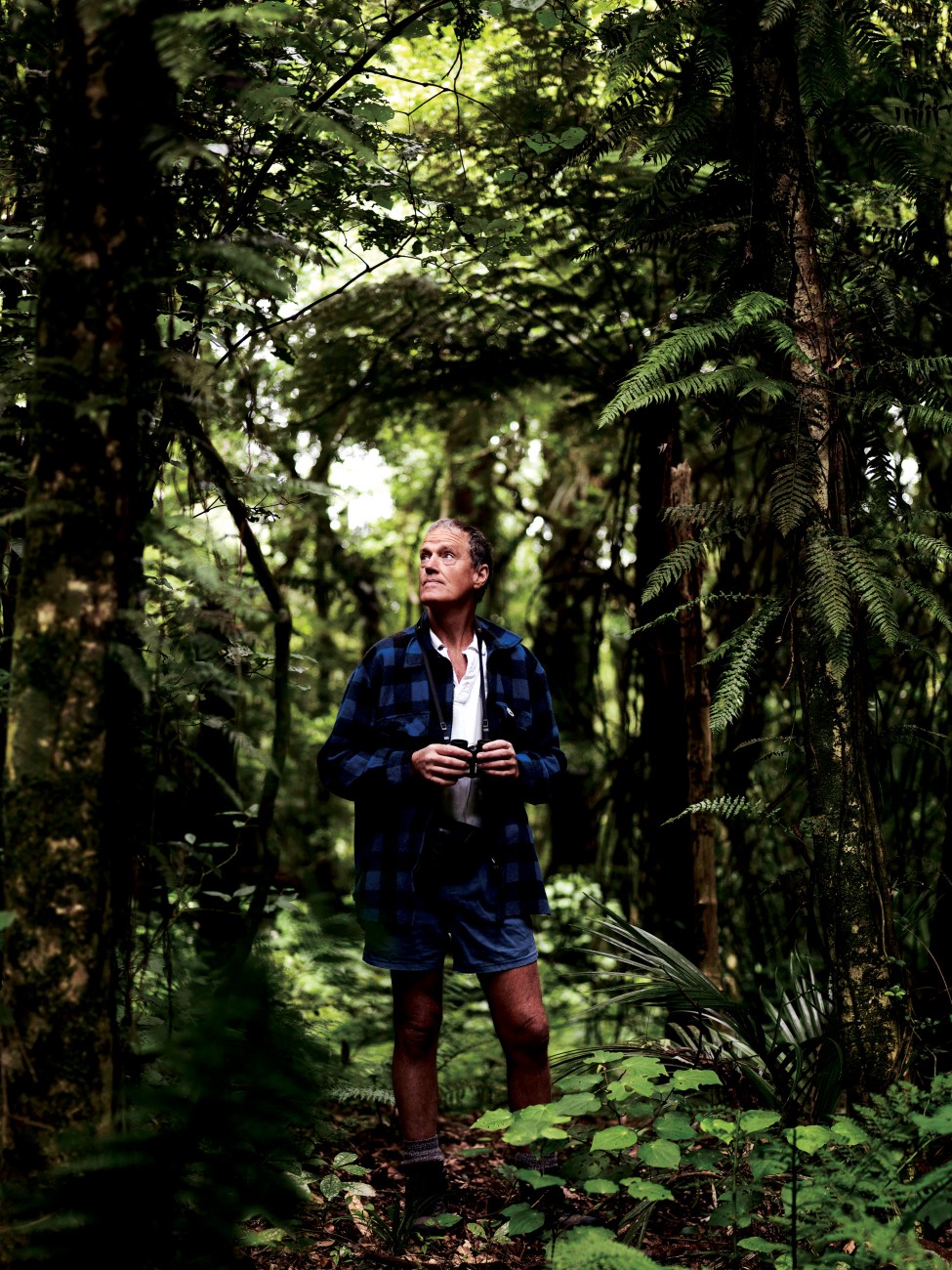 Chris Smuts-Kennedy, Smuts to his friends, was using an old birding trick—rubbing a small piece of polystyrene along a sliver of mirror. Wiping it swiftly, just once, evoked a “stitch” sound, similar to the call of the stitchbird, or hihi. A yellow and black bird, not much bigger than a sparrow, hovered in the branches of the tawa and the totara above us. Smuts-Kennedy wiped the mirror again, the bird hovered, “stitched” and, after a few minutes, flut­tered off. “Yeah, do it too long and it puts them off,” he said.

Smuts-Kennedy is the ecologist responsible for species reintroductions for the Maungatautari Ecolog­ical Island Trust, the ambitious conservation project that, thanks to phenomenal public effort, has ring-fenced 4300 ha of a mountain in the Waikato with 47 km of predator-proof fencing. Almost all the mam­mals have now been eliminated—bar several mice, a few rabbits and hares and, at the time of writing, one remaining goat.

The project is continuing apace. The bird hov­ering above us was one of 79 stitchbirds released into the sanctuary in early March, and soon after, 60 whiteheads were brought over from Little Barrier. Takahe, kaka and kiwi have been returned, and kiwi have started breeding. Smuts-Kennedy says that, funding permitting, the mountain could chime with kokako by the end of next year.

Smuts-Kennedy started working with New Zea­land’s fauna 43 years ago, and says a career high­light was a trip with scientist Don Merton to look for kakapo in Fiordland. “This was the early 70s when they were thought to have either gone or be beyond saving. So Merty asked for $2000 for a helicopter and a couple of good men and he and I and an­other fella [Warwick Brown] flew into the Esper­ance Valley, and within half an hour we found signs that kakapo had been feeding.” It was on the same trip that they recorded, for the first time, the sound of the kakapo calling, which eventually confirmed kakapo as having a lek-breeding system. But they still had much to learn. “On that first trip we went in there with mist nets,” he recalls. “Back then, we thought that they glided from tree to tree.”

Smuts-Kennedy has a list of species that he is working towards reintroducing to Maungatautari which includes saddleback, red-crowned and yel­low-crowned kakariki, the rifleman, tuatara and the Mahoenui giant weta. He says he’d like to reintro­duce kakapo too, and he isn’t just saying this for audacious effect. He points to the rimu trees sur­rounding him, noting that kakapo breeding is de­pendent on the fruiting of such trees. But here, the fruit doesn’t get blown off the tree mid-season by bad weather as it often does on those islands fur­ther south that are currently home to our remaining kakapo populations. “And any chicks then starve unless they receive human support.”

Of course, there isn’t a conservation project in the country that wouldn’t want a kakapo or two, and those involved in the kakapo-recovery programme will inevitably be choosy about where any “spare” birds might go, but this doesn’t put him off. “We have to get them. There’s no two ways about it. Maunga­tautari is already one of the most important restora­tion sites in the country because of its size and forest habitat quality. The restoration of a naturally function­ing ecosystem on the mountain—as far as that is pos­sible—has got to be our prime and ultimate goal.”

Smuts-Kennedy has some ideas; Maungatautari could host Sirocco, the kakapo hand-raised by hu­mans which, consequently, is ill-equipped to make any contribution to the general population; “he tries to mate with humans”. But, being people-friendly, he’s an excellent ambassador for the species. “To get Sirocco on display would be great, although we would have serious crowd-control issues.” Then there’s those birds referred to, in ecological circles, as the “Duds and Studs” which, as the nickname implies, are either too dominant in the gene pool already or, in contrast, a waste of breeding effort—because of poor sperm viability, which is often symptomatic of an ageing or small, inbred population.

Throughout the morning, when the conversation wasn’t about the Maungatautari conservation project itself, it invariably led back to kakapo: their person­alities, their behaviour, the latest in kakapo research. Evidently this is a bird Smuts-Kennedy has a particu­lar attachment to. “I think anyone working on kakapo falls under their spell,” he says.

And who knows, he might just pull it off. “It will certainly be a defining moment when they finally return to the Waikato…perhaps it won’t happen for another 10 or more years, but it will be the totally delicious icing on a very significant cake. And I hope it will be in my lifetime.”