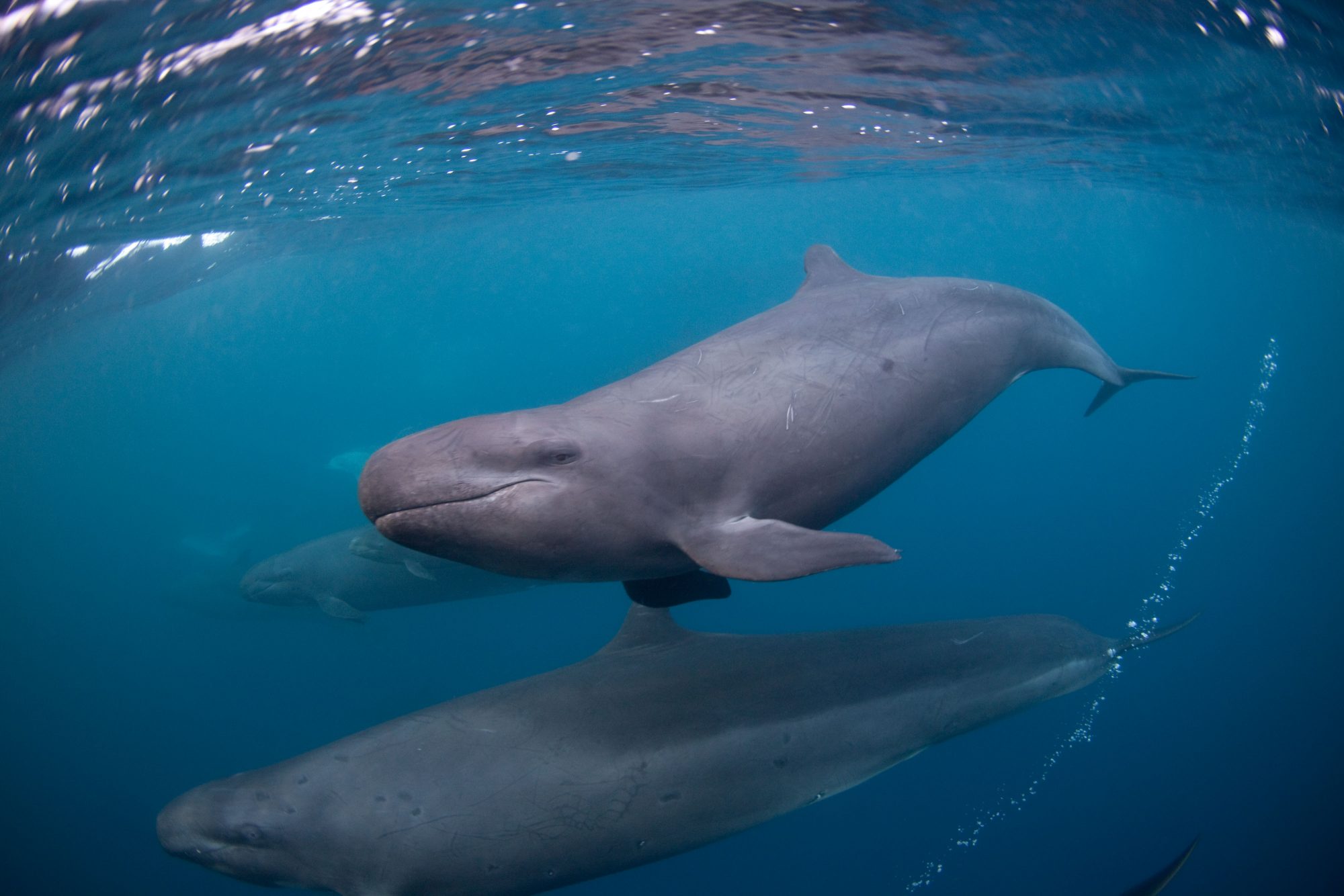 How belittling to call a whole species “false”— yet that is how the false killer whale is known. Such a derogatory name has a simple explanation, and it lies with the skull of this little-studied species. Ex­ternally they bear little, if any, resemblance to “kill­er whales”. They do not have the distinctive black and white coloration, nor the robust body shape. Instead, they are shades of dark to light grey, with a rather pronounced “underslung” lower jaw, which gives them a perpetual visage of good humour. Internally, however, their skulls are very similar to orca and they too have 38–40 teeth equipped for effectively capturing prey.

Their scientific name, Pseudorca crassidens, gives rise to their common name, as Pseud (silent P, so pronounced sood) is derived from the Greek word for false or counterfeit. Combining this with orca gives us their common moniker; however, anyone in the know calls them Pseudorca. They are the only member of this genus and their species name, crassi­dens, is derived from the Latin for thick-tooth.

They were first discovered by Europeans as a fossil on land in England, in 1846, and thought to be extinct. But within 20 years, the fossil evidence came to life when 100 individuals beached them­selves on the coast of Germany. Pseudorca are intensely social and mass strandings have contin­ued to occur around the world, with New Zealand being no exception—230 stranded at Manukau, Auckland, in 1978. Yet it wasn’t until the late 1950s that observations at sea were collated and behavioural records were published scientifically, although they are still considered one of the least understood of the dolphins. And, yes, again, their common name is a misnomer as they are not true whales but rather one of the larger members of the dolphin family.

Pseudorca are generally found in tropical to warm-temperate waters and were first recorded in our waters by James Hector in 1872. However, their distribution is constantly being refined, with new records expanding their known range to now include waters with a wide temperature range of 9–30° C. Off Northland, where most New Zealand sightings occur, Pseudorca are typically seen between Decem­ber and April. Although considered pelagic (an open-ocean species), they are occasionally sighted closer to shore. But regardless of where they are found, remarkably little is known about them.

We have hints about their food preferences from looking at stomach contents collected from strand­ings and have found that their diet consists predom­inantly of squid and fish. Like orca, they are known to take dolphins and have also been observed attacking humpback and sperm whales. The Pseu­dorca, rather than attempting to kill these larger whales, may be intending only to remove mouthfuls or intimidate their larger cousins. Another theory has it that the Pseudorca are harassing these bigger species to the point of vomiting, then feeding on the regurgitations.

However co-operation may be the driving force behind their frequent associations with other species of dolphins, in particular bottlenose dolphins.

Jochen Zaeschmar, who has taken an interest in Pseudorca since first encountering them in the Bay of Islands in 2000, has found that 93 per cent of encounters involve more than one species. There are many theories about why they mix. One species may benefit from the abilities of the other (such as expertise in locating food) or they may be available as sexual partners, even though they are different species. There are instances of Pseudorca and bottle­nose dolphin hybrids in captivity—the offspring are referred to as “wolphins”—so interspecies mating can’t be ruled out when it comes to mixing in the wild. Conversely, given that Pseudorca are known to eat dolphins, it remains a mystery why they don’t prey on the bottlenose dolphins with which they travel.

Still another theory is that mixing is predator-driven, in keeping with the adage of “safety in numbers”. This is particularly apparent in the open ocean, where there are few locations to hide. The more individuals in a group, the higher the chance of detecting a predator and the lower the chances of any one individual being eaten. Yet until recently, no predators for Pseudorca had been recorded.

It was confirmed in dramatic fashion in the Bay of Islands this year, when a group of 50–60 Pseu­dorca (accompanied by a few bottlenose dolphins) were attacked by eight orca, in front of boats full of tourists. The orca rammed the Pseudorca three times, tossing them into the air. Given that there were at least 15 Pseudorca calves in the group, it is likely that the orca anticipated that the young had little chance of escaping, whilst their moth­ers would remain to protect them. The orca finally managed to kill at least one calf and possibly an adult as well. Zaeschmar photographically identified some of the Pseudorca and has confirmed that the group contained many known individuals. 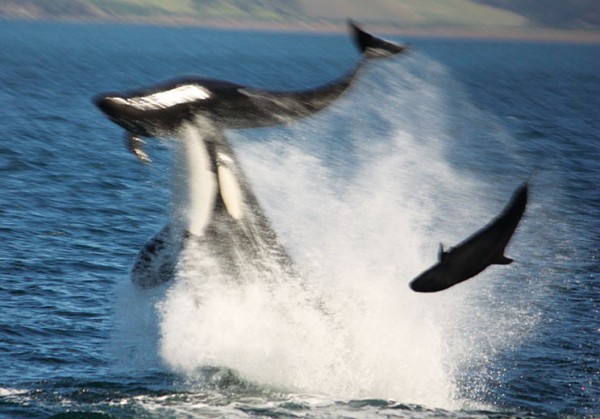 Pseudorca are certainly gregarious—group size is usually between 10 and 60 animals but some groups number in the hundreds, with the largest-known group of 835 recorded from yet another mass stranding on the coast of Argentina.

There are social bonds within these groups and some bonds are strong enough for the Pseudorca to risk their lives for one another. During a strand­ing in Florida, a group of 30 stayed with an injured male, physically supporting him in the shallow waters until he died three days later. Then the rest of the group, many of whom were badly sunburnt, headed out to sea. It was clear that this wasn’t a mass suicide attempt, but a gesture of support for the fatally injured male.

Communication between individuals is intense. Like other dolphins, Pseudorca use echolocation to navigate and find food, but their distinctive drawn-out and high-pitched contact whistles can be clearly heard, even above water. Another aspect of commu­nication is their aerial behaviour—dramatic high leaps, belly-flops, breaches, side-slaps and dolphin-like porpoising are all part of their daily lives. There is still much to learn about these animals and, although they might be called “false”, there is nothing phoney about the Pseudorca.

Symphony of the dolphins

Exploring the underwater realm far from our shores

A fin and a prayer