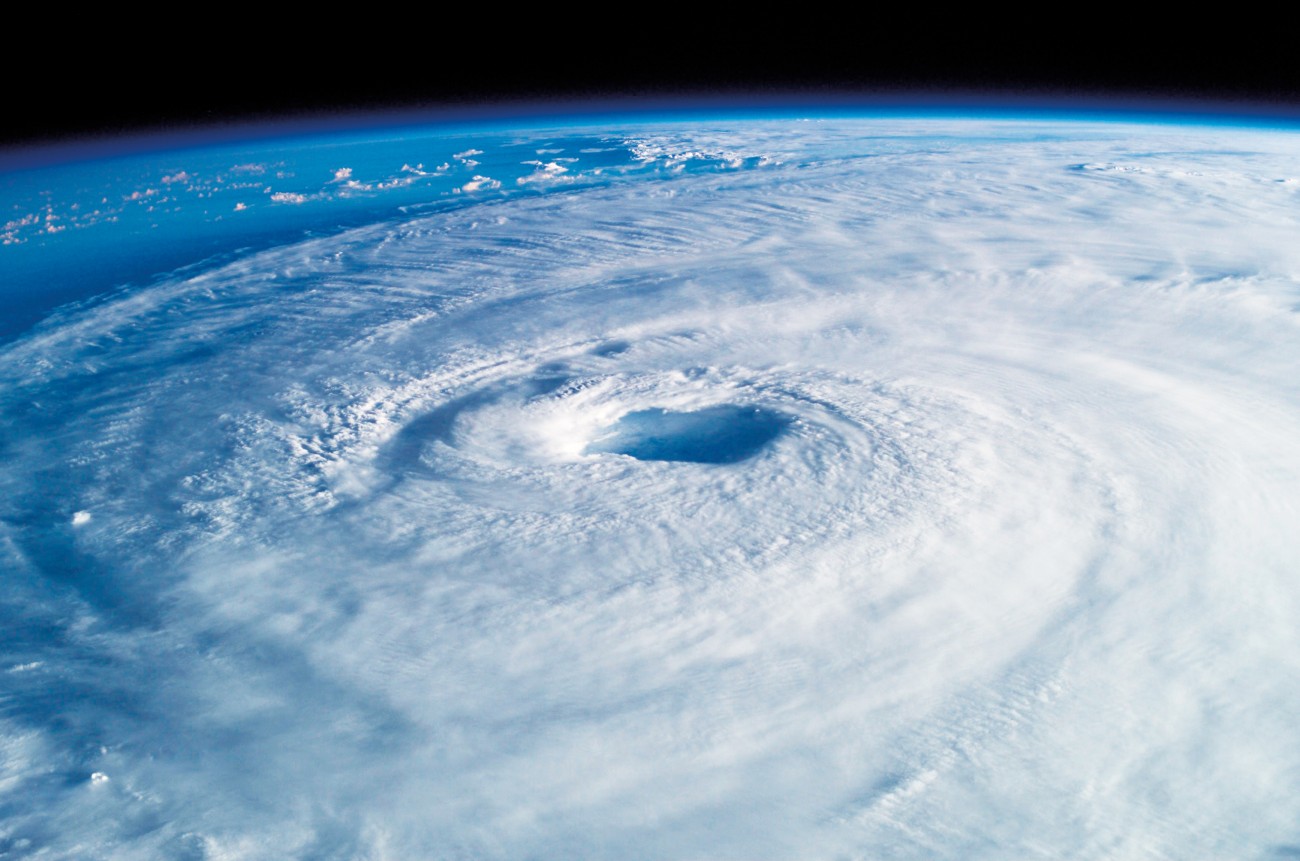 The Giant Sheet of high cloud spreading out from the eye of a fully developed tropical cyclone can cover more than half a million square kilometres, yet the area of destructive winds is only a fraction of this. Wrapped around the outside of the ring of cumulonimbus clouds that form the eye-wall, the most violent winds often cover less than one per cent of the area of the storm cloud. This is why timely warning of a tropical cyclone’s position and movement allows ships to move out of harm’s way.

On 17 December 1944, Admiral William Halsey of the United States Navy did not have clear warning and sailed his fleet into the path of a major typhoon, Cobra, east of the Philippines. In the carnage that followed, three destroyers capsized and sank, 778 sailors were killed and 146 planes were destroyed—only one short of all aircraft losses at the Battle of Midway in 1942.

Most of the planes were lost from the flight decks of aircraft carriers, which rolled through 70º, even though they were tied down by multiple lines of steel hawser more than 20 mm thick. Waves broke over the decks of the carriers, tearing planes loose, and the wind was so strong some planes tried to lift off.

On the carrier Monterey, a hellcat fighter on the hangar deck broke loose and crashed into the plane next to it, rupturing its petrol tank. Most of the fuel had been drained from the tanks before the worst of the storm came but not all of it could be extracted. What remained was enough to start a fire that almost destroyed the ship.

Smoke penetrated the ventilation shafts, forcing the evacuation of some of the engine rooms, and the fire spread to another deck. Eventually the captain had to cut power to the propellers and heave to in order to have enough steam pressure to drive the pumps fighting the fire.

Across the fleet, ships were losing parts of their superstructure and men were being washed overboard in ones and twos. There were some lucky escapes. One sailor fighting the fire on Monterey was washed into the sea, but another threw a fire hose after him and he was able to climb back on board.

Also on Monterey, Lieutenant Gerald Ford (later President of the USA) fell while climbing to the bridge as the ship rolled heavily. Sliding across the flight deck towards the sea, he was saved by a 50 mm steel lip designed to stop tools sliding overboard. It did not stop him but slowed him enough to spin onto a catwalk below.

The rolling and pitching were worst on the smaller vessels such as the destroyers, many of which were riding high as they were carrying less than 20 per cent of their fuel capacity. They had been refuelling when the first of the swells from the typhoon reached the fleet, snapping fuel lines and making close manoeuvring too dangerous.

Some of the destroyers had flooded empty fuel tanks with seawater for ballast as the storm built in intensity. As waves broke over the destroyers, they began to take water in through ventilation shafts and other openings, causing electrical circuits to short. Some lost radars, ripped off by wind or waves, leaving them blind and at risk of colliding with other ships in the fleet. Others lost masts or smoke stacks the ships’ centre of gravity.

On the other hand, any quantity of water that got inside a ship lessened its stability by moving from side to side as the vessel rolled. This seems to have been the case with the destroyers that capsized. Survivors described the ships rolling further and further on succes­sive rolls before eventually going all the way over.

Given the conditions—winds 125 knots and 20-metre waves—it seems a miracle that there were any survivors. In the end, 98 were rescued, some of whom were in the water for more than two days.

While the rescue was going on, Halsey turned the serviceable part of the fleet back to attack the Japanese forces on Luzon, the largest island in the Philippines. A couple of

months earlier, he had followed closely behind another typhoon and successfully attacked the Japanese on the Ryukyu Islands before they could recover from the wind damage and get any planes off the ground.

Halsey hoped to do the same on Luzon, but this time the typhoon turned away to the northeast, missing the land and leaving the ocean too rough and the winds too strong for the carriers to launch the attack.

The turn of the typhoon had been expected a couple of days earlier by Halsey’s forecaster, based on climatology of December typhoons, and explains why the fleet sailed into the worst of the storm. His information had been sketchy and he wrongly guessed how far away the typhoon’s centre was, as well as getting its movement wrong.

Halsey survived a court of inquiry into his handling of the storm. Although the court found fault, particularly in Halsey’s failure to order weather reconnaissance flights as the storm approached, it did not recommend a court marshall.

Halsey managed to sail into another typhoon in June 1945. This time no ships sank, although six sailors were killed, 75 planes destroyed and several carriers had the front of their flight decks smashed. The cruiser Pittsburgh had its bow snapped off, which was retrieved by a tug the next day and towed to Guam. Halsey, by now a war hero, survived another court of inquiry.

These storms hastened the introduction of regular weather flights into typhoons in the Pacific, a practice begun in the Atlantic during the summer of 1944 and credited with saving hundreds of lives during the great hurricane of September 1944.

Reconnaissance flights remained the best way to track the eye of a storm until high-resolution satellite images became available in the 1980s.

More recently, satellites with microwave sensors that show the heavy rain bands define the eye-wall even through high cloud, and ever-improving computer models have reduced much of the uncertainty over the movement of these storms. For anyone able to move out of the forecast path of a cyclone, the risks are now a lot lower than in the past.