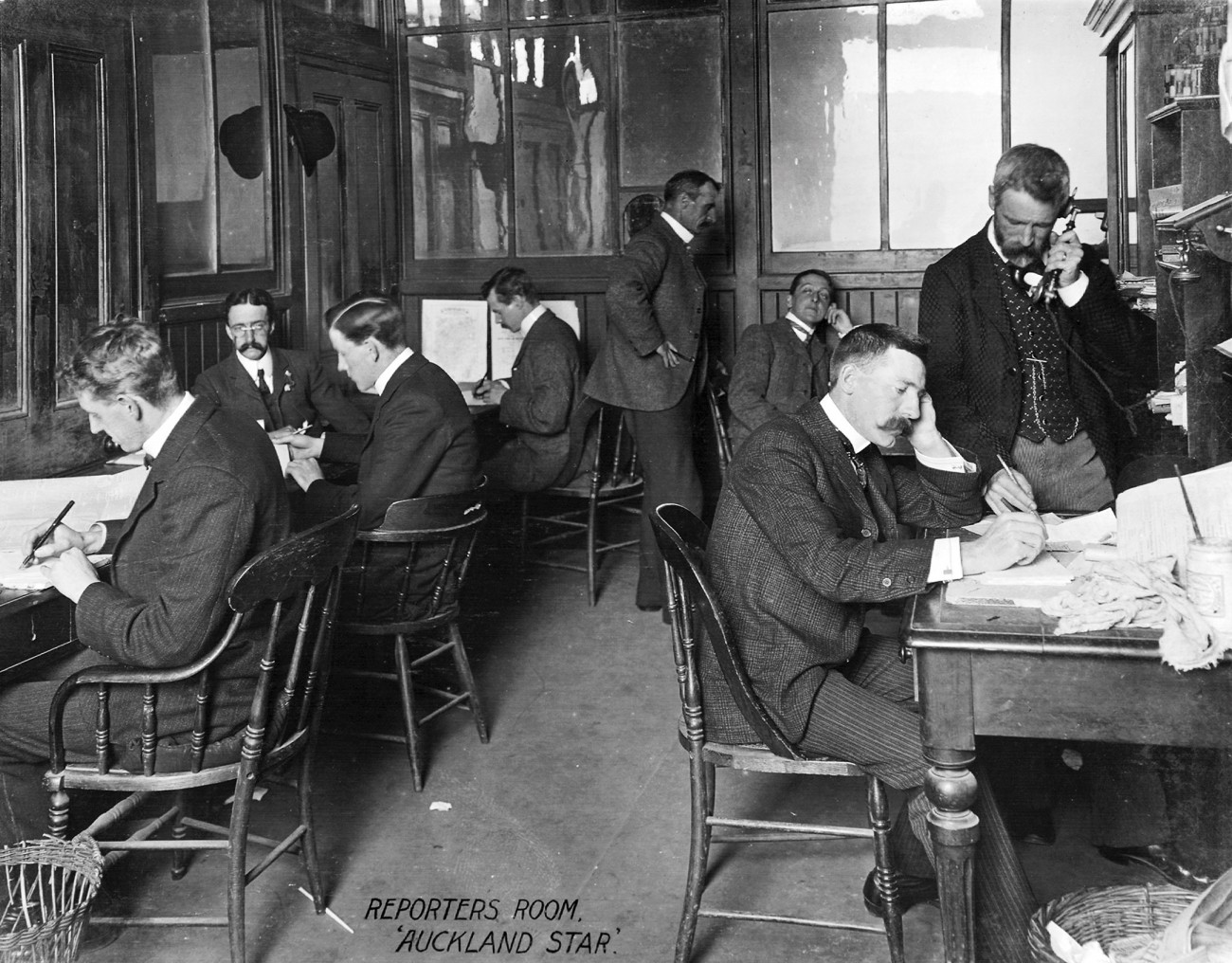 On a late spring morning in 1868, Henry Brett rushed down to Auckland’s Queen Street Wharf, where he quickly hired a waterman to row him out to the steamer Lord Ashley, newly arrived from the East Coast. Brett, the New Zealand Herald’s shipping reporter, had a formidable reputation for gathering newspapers and reports from such newcomers—“skinning the ship”, it was called—and getting news of distant happen­ings into print faster than his Evening News and Daily Southern Cross rivals. When he was at home in Parnell, his eyes seldom strayed from the Mount Victoria flagpole across the harbour, where a flag was run up to signal a newly sighted vessel.

On this day, the ever-vigilant Brett was to get the scoop of his life. When he drew alongside the Lord Ashley, the ship’s purser appeared at the rail and tossed a parcel of papers down to him with the cry: “Catch this and pull for your life.”

As the straining waterman made for shore, Brett opened the parcel and learned of a massacre in Poverty Bay just days earlier in which Te Kooti had killed some 50 settlers and local Maori in retribution for land crimes and false imprisonment. When Brett’s rival journalists reached the city—having been obliged to laboriously interview the ship’s passengers—it was to find a special edition of the Herald already trumpeting the sensational news on the streets.

Brett embodied the verve and cut-throat competitiveness of early colonial news gathering. The young English printer had arrived with other immigrants aboard the Hanover in September 1862, intending to make for the nonconformist Albertland settlement north of Auckland, but instead he was snatched up by the short-staffed Daily Southern Cross. The Cross had gone daily just months earlier and, like all papers, was finding skilled workers hard to come by. Its generous pay offer could not keep him long, though, and three years later, the Herald lured him away.

Extra! Extra!, David Hastings’ highly read­able account of early Auckland’s pioneering newspapers, rightly makes much of Brett, whose career followed the evolution of the industry. Mid-19th century colonial papers had been meagre affairs—usually a page of advertisements, followed by the all-important shipping news, an editorial, a scattering of court reports, transcripts of public meet­ings, and a collection of news items gleaned from overseas papers. But by century’s end, the two that survived­ the New Zealand Herald and the Auckland Evening Star (which Brett put money into in 1870)—had become recognisably modern: globally connected papers printed in large numbers on high-speed presses and carrying a broad range of domestic and international news.

Though personalities loom large in Extra! Extra!, Hastings is keen also to correct what he sees as a widespread fallacy: that newspa­pers were instruments used by a ruling elite to shape and control public opinion. Admit­tedly, adopting a pro-government stance could secure valuable printing contracts, says Hastings, but the reality is that papers survived only if they were adept at giving the public what it wanted.

In 1856, four new Auckland papers were launched but none survived long, says Hast­ings, because they all neglected the news. One seemingly existed to voice James Busby’s land grievances and all were “more like political pamphlets aiming to change the world” than satisfy public curiosity.

If papers were instruments of control, then the Cross should have prospered mightily when soon-to-be colonial treasurer Julius Vogel became owner-editor in 1869. The newspaper loudly supported all of Vogel’s great—and popular—financial schemes, yet its size and circulation fell. Hastings puts that down to Vogel’s ignorance about what made papers viable.

In the early 1860s, as part of his fight against the rival New Zealander, Robert Creighton had transformed the Cross into something of a news-gathering machine with an extensive and widespread network of correspondents—among them the Prussian adventurer Gustavus von Tempsky—who fed readers with every rumour and scrap of news on the deteriorating relations between settler and Maori.

But by the 1890s, ‘the Maori question’ that had been at the heart of Brett’s dash to the Lord Ashley just 20 years earlier had faded from the printed page. Even the death of King Tawhiao in 1894 was seen as being of merely historical interest. New issues were to the fore, thrown up by the social and economic changes then sweeping the world; among them changes in the status of women and the inten­sifying struggle between labour and capital.

What didn’t change, says Hastings, was the imperative for newspapers to serve readers’ interests.

It was the readers who decided what was news and whether a paper would live or die. This fact makes them more valuable as historical documents than researchers schooled in the “instruments of social control” model may have realised.

Television viewers could take this lesson: a society gets the news it deserves.