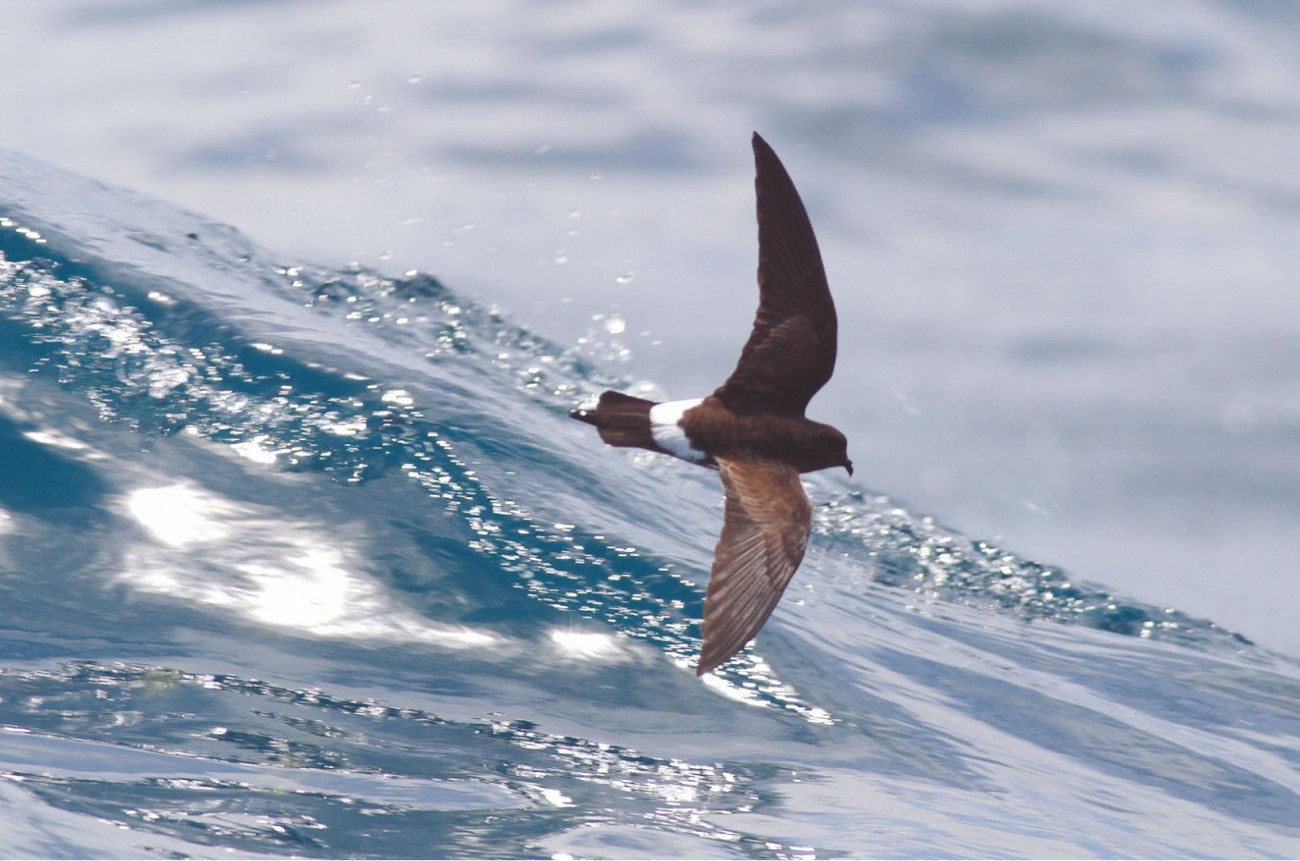 It is fairly safe to say that good news concerning the natural world, in these days of global warming, wide­spread pollution and rapidly disap­pearing rainforests, is sparse. Hence news of the rediscovery of the New Zealand storm petrel is especially welcome.

The New Zealand storm petrel is a fairly enigmatic bird. Three speci­mens were collected in the 19th cen­tury, with two being taken by French scientists during the Astrolabe Expedition in 1827, off East Cape, in the North Island. These specimens both now reside at the Museum Na­tional d’Histoire Naturelle, Paris. The third specimen, seems to have been collected off Banks Peninsula, South Island, and was presented to The Natural History Museum, London, by G.C. Street in 1895. The date of its collection is unknown. The New Zealand storm petrel then seems to have vanished from view for 150 years, not being seen, or at least recognised, since.

All this changed in January 2003 when a strange storm petrel was spotted by a group of birders off the Coromandel Peninsula. This is now considered to be the long-lost New Zealand storm petrel.

As the three storm petrel skins collected in the 19th century were housed with many other specimens at these museums, they seem to have been largely overlooked. It was to be about 100 years after their collection before the specimens were formally described, with G.M. Mathews ascribing them to a new genus and giving them the name Pealeornis maoriana in the Bulletin of the British Ornithologist’s Club in 1932—slow work, even for a museum.

However, in 1952 Murphy and Snyder re-evaluated the species and decided that the three specimens were mere variants of Wilson’s storm petrel, Oceanites oceanicus, and that is where they have stayed ever since. The Checklist of the birds of New Zealand considers the bird a colour variant of Wilson’s storm petrel, whilst Peter Harrison, in his defini­tive book Seabirds—an identiÞcation guide, first published in 1983, also regards the New Zealand storm

petrel as a probably-extinct colour form of Wilson’s storm petrel. The eminent ornithologist W.R.B. Oliver was one of the few dissenters, opting for full specific status for the New Zealand storm petrel in The Birds of New Zealand, where he wrote that as Wilson’s storm petrel “is only a straggler to New Zealand and is not known, where it is found in abun­dance, to produce colour varieties, for the present I treat maorianus, of which three very similar specimens have been taken, as a separate species.”

Several ornithologists have over the last few decades pondered the issue and some have visited the specimens. However, not expect­ing the birds to be rediscovered, it wasn’t urgent work. A new study, due to be published soon, will sug­gest that the bird should be consid­ered a full species, within the same genus as Wilson’s storm petrel, and given the scientific name Oceanites maorianus.

The question naturally being asked now, is how can a bird go unrecognised for so long in waters as busy as those of the Hauraki Gulf and Bay of Plenty? In summer, once a breeze gets up, the common white-faced storm petrel Pelago­droma marina can often be seen pat­tering across the surface of the outer gulf with wings held up—a practice that has earned storm petrels the irreverent title of “Jesus birds” or “J.C.Birds” from seafarers. Why wasn’t this other petrel seen?

As indicated above, the bird had been relegated to a taxonomic backwater—an extinct colour vari­ant—and who is going to be looking for that? Part of the problem has also been that recognition of storm pet­rels at sea is fraught with difficulties. They are small—around the size of a blackbird—and several other spe­cies sometimes encountered in our waters are similarly coloured. They also prefer rougher weather, when a lot of observers tend to be less interested in identifying birds. They are not called storm petrels for noth­ing! Furthermore, the utilisation of a technique fishermen have used for years to draw fish to boats—chum­ming or berleying, which involves throwing fish scraps and oil off the back of the boat—has only recently been adopted by birders, with great success at attracting birds.

Even finding storm petrels at their breeding grounds is not easy. They only come ashore after dark so as to avoid predatory skuas and gulls. Also, the coastline of New Zealand is long with many offshore islands that could be breeding grounds. Since the rediscovery it has been suggested that the New Zealand storm petrel possibly breeds on Little Barrier Island, however storm petrels do not seem to survive long in the presence of rats, even smaller species like kiore Rattus exulans, so some of the rat-free islets and stacks in the Hauraki Gulf seem a more likely prospect.

Although two British ornitholo­gists have received a lot of the credit for sighting and photographing New Zealand storm petrels in November last year, one of these storm petrels was first noticed by Brent Stephen­son and Sav Saville.

They were leading a pelagic bird spotting trip out of Whitianga, on the east side of the Coromandel Peninsula, in January 2003. Near the Mercury Islands, they had been among large numbers of white-faced storm petrels for about an hour when Saville spotted “a blackish storm petrel with a gleaming white rump approaching the bow”. The bird was in view for about a minute with several of the birders on board seeing it. Stephenson was able to take some photos.

At first the party thought that they had seen a black-bellied storm pet­rel, Fregetta tropica, which would have been unusual as in summer this species breeds on the subantarctic islands, including the Auckland, Antipodes, and Bounty islands. Only after examining the photos did they begin to question the identity of the bird. The New Zealand storm petrel is smaller, more slender and with narrower more pointed wings than either the black-bellied or similar white-bellied storm-petrel Fregetta grallaria. Those species are stocky, fat-headed and with broad wings. The photos also showed that the bird had a streaked underside rather than the usual black mid-ventral stripe of the black-bellied storm petrel.

New Zealander Ian Southey was one of those who had earlier vis­ited the three specimens in London and Paris. His photos showed all three birds had streaked undersides, just like the bird photographed by Stephenson.

Much debate ensued as the photos were emailed around the world to birders and seabird bi­ologists, and information posted on Stephenson’s website (http://www. wrybill-tours.com). Some felt it was indeed a New Zealand storm petrel, whilst many considered it to be just one of the other black-and-white storm petrels. The Mercury Island sighting didn’t therefore, get the attention it deserved, and it wasn’t until the November 2003 sighting of a flock of about 20 birds near Little Barrier Island, that the media really started taking an interest. Two Brit­ish ornithologists Bryan Thomas, a bird photographer, and Bob Flood, a writer, saw the flock.

They later told the BBC News Online, “We were in a small boat off Little Barrier Island, not far from Auckland on the 17th of November when we saw between 20 and 30 petrels. Off New Zealand you expect to see two other species, the black-bellied and the white-faced storm petrels. But the bird we saw is really distinctive and different. The under­parts are white with a black streak, and the feet project further back from the tail. There are differences in the detail of the plumage as well and we were as close as 20 feet (six metres) to them.” The New Zealand storm petrel also has a distinctive mode of flight, bursts of rapid flut­tering wing beats punctuating long glides during which the bird may strike the sea surface with its feet.

Since then there has been a rash of sightings, with people even flying in from abroad to “twitch” the birds, an expression birders use when add­ing a species they have not previous­ly seen to their life list of sightings.

Another puzzle—to which the ex­istence of a New Zealand storm pet­rel could provide a solution—is that sub-fossil remains of storm petrels, which have been unearthed in recent years, include a number of bones which cannot be attributed to any living species. Of course, there are no bones from the newly-seen birds with which to make comparisons.

Although everything seems to point to the “new” birds being the New Zealand storm petrel, final proof will probably only come when a bird is captured. This will allow measurements and DNA samples to be taken and compared with the museum specimens. If confirmed, the re-discovery of the New Zealand storm petrel will be one of the most noteworthy bird discoveries in New Zealand for many years, ranking right up there with the taiko Pterodroma magentae and takahe Porphyrio mantelli. New Zealand has not yet revealed all of its bird secrets.