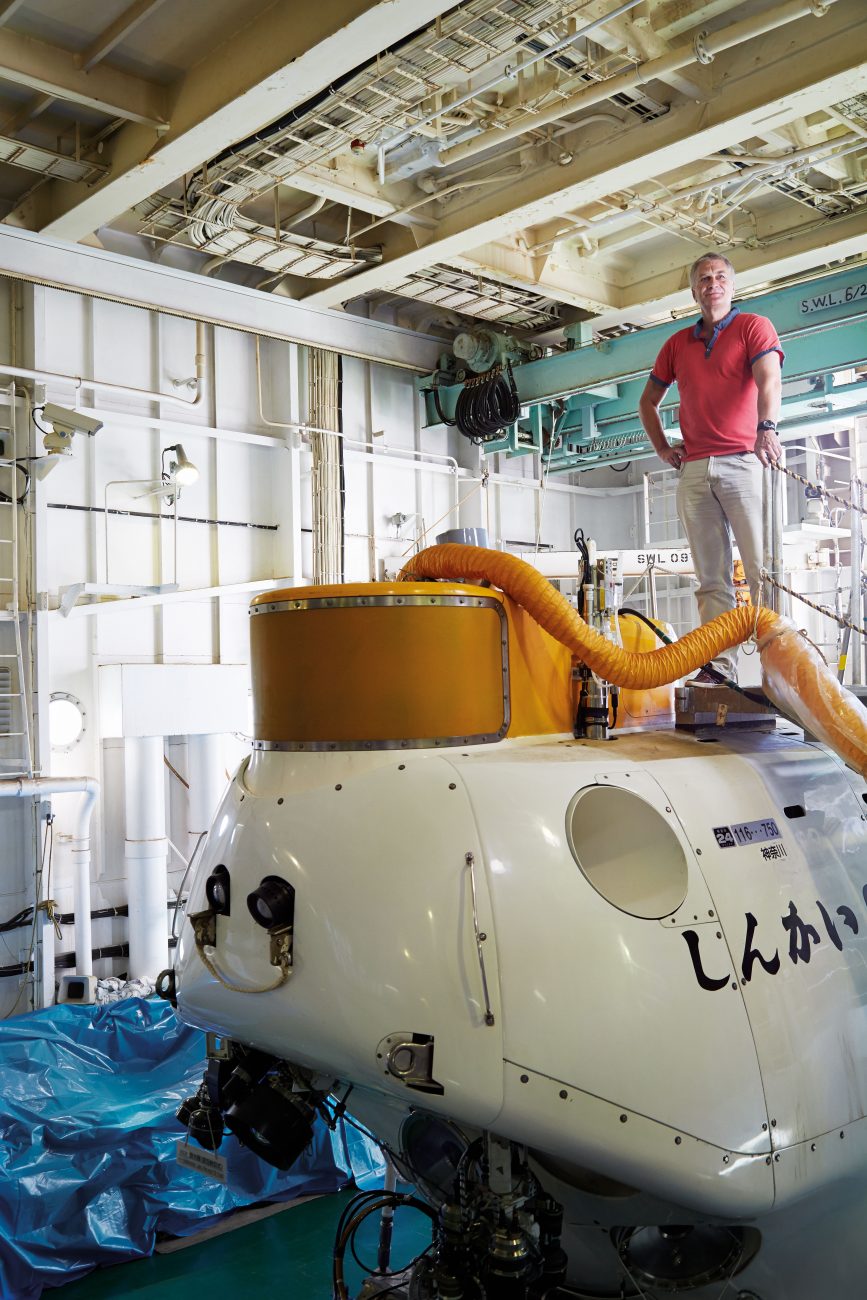 The inky darkness outside the view ports of the Shinkai 6500 submersible makes it feel even smaller than it is. Three people squeeze into a cabin two metres across: Shinkai’s pilot, a co-pilot and marine geologist Cornel de Ronde. There’s nothing to be seen during the hour it takes to descend 1800 metres to the sea floor. Finally the sonar kicks in, and de Ronde knows there are 100 metres to go. Twenty metres above the seabed, the floodlights are switched on, and the world outside the view ports is visible for the first time. “And then you see this small part of the Earth that not another living soul has ever seen in the history of mankind,” says de Ronde. He’s made about 12 of these dives, but there’s still a sense of awe in his voice. Not that there’s much time for reflection: it’s up to him to operate the Shinkai 6500’s two cameras, collect samples for the other scientists waiting on the surface, and help to locate the hydrothermal vents they’re on a mission to find. With floodlights offering only 10 metres’ visibility, de Ronde likens exploring by submersible to wandering in the bush on a moonless night looking for a hut by torchlight. “But the really good pilots, they just know,” he says. “They see signs—shells of dead animals—on the periphery of these systems.”

Then there’s the small matter of not getting distracted by other sights: liquid carbon dioxide pouring out of the seabed and animals such as tube worms, shellfish and crabs thriving under pressure that would crush a tin can. “I’ve seen ponds of molten sulphur sloshing around, with waves on them—on the bottom of the sea floor.”

Hydrothermal vents, when you find them, look oddly man-made, as though they’re part of an undersea factory. “There are all these chimneys sticking out pumping out huge volumes of black smoke, just like a big indus­trial estate, but it’s entirely natural.”

This ‘smoke’ is the result of metal-rich fluid heated to 300°C mixing with seawater at a temperature of 3°C. The dissolved metals immediately precipitate out as tiny particles, creating clouds in the water. Forests of these chimneys can appear, flourish and die as vents change position, become clogged, or grow to towering heights.

De Ronde’s interest in geology came from a combination of curiosity about the natural world and rollicking stories of oil exploration from a geophysicist brother-in-law.

“It just sounded very Boy’s Own-type stuff—people getting paid to go and explore, fly in helicop­ters and be on drill rigs.”

After a stint studying the now-closed Golden Cross gold mine on the Coromandel, he spent a couple of years in South Africa investigating three­billion-year-old mineral deposits formed on the ancient sea floor by hydrothermal systems. “Then I got an offer from the Japanese government to join them and dive in submarines studying modern-day equivalents of these systems,” he says.

Since then, de Ronde has flipped back and forth between researching modern and ancient versions of the same thing. ‘Black smoker’ chimneys offer a missing piece to the puzzle of how metals arrived on the Earth’s surface billions of years ago, and where they might be found now. “If you have a better understanding of how these deposits are formed and why they’re formed, that aids considerably in the exploration of these things on land,” he says. “You might go looking for specific types of rocks in certain settings which could be the ancient equivalent of one of our submarine volcanoes.”

In addition, de Ronde’s research looks at what potential mineral wealth lies in New Zealand’s vast exclusive economic zone (EEZ). “We have some unique things in our EEZ simply because our country sits astride a plate boundary,” he says. “Because the plates collide and then subduct, we form volcanoes and hydrothermal systems that together move metals within the Earth’s crust.”

Back in New Zealand, de Ronde put together a proposal to survey all New Zealand’s offshore submarine volcanoes, right up to Tonga. He’s also spent part of the past few years on a project at Lake Rotomahana, near Rotorua, the most detailed survey ever to be conducted of a freshwater hydrothermal system. The project caught the public eye after the team came across what they believe are the lower tiers of the Pink Terraces, buried beneath metres of mud.

Next, de Ronde hopes to drill into an active submarine volcano named Brothers, northeast of White Island. The goal is to figure out how metals from deep inside the Earth end up on the ocean floor. Is it because hot water leaches metals from volcanic rocks, or are metals brought to the seabed by gasses that come from the magmas beneath volcanoes? If the project goes ahead, it’ll be another adventure for de Ronde, with a great deal of responsi­bility—and money—riding on it. “We’re trying to get the government interested in the 95 per cent of our sovereign estate which is underwater,” he says. “The country you or I know of as New Zealand is a minuscule amount of our territory.”