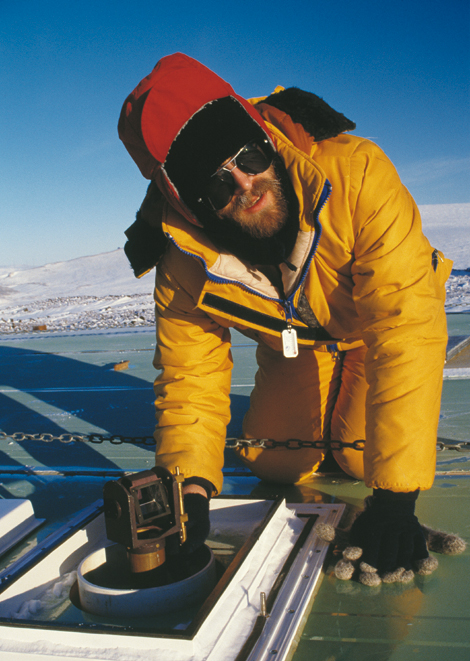 It is a clear day in Antarctica, and out in front of the low, green, coolstore­-like buildings of Scott Base on the shores of the frozen Ross Sea three men are struggling with what looks like a large tripod on the back of a trailer. The device is actually a portable drill, and the trio is testing it before flying into the Dry Valleys for several weeks of geological sampling.

But instead of using diesel to lubricate the drill bit as it bites into the permafrost, the team is trialling the use of compressed air as a cooling and circulating medium. “This is a much cleaner way of drilling down here. No mess, no spills and no clean up. And that makes it much easier to get permission to drill,” says drilling manager and Antarctic veteran Pat Cooper.

Welcome to Antarctic research 2001 style: low impact, environmentally conscious and administra­tively fraught. A lot has changed in Antarctica since the days when base staff would drag old machinery and other rubbish onto the sea ice, where it would eventually fall through when the ice melted. In 1991, the Environmental Protocol was added to the Antarctic Treaty, the international agreement that governs management of the continent—though it was not until 1998 that all states ratified it. The protocol banned mining activity for a minimum of 50 years and put a new emphasis on environ­mental protection. Throwing something out at Scott Base today is something of a scientific exercise in its own right, with waste being separated into more than 10 categories, and almost all of it returning to New Zealand for recycling or disposal. Only sewage and wastewater is discharged into the sea.

The base’s management is now consistent with international ISO 14000 environmental standards. On the other side of Observa­tion Hill, a couple of kilometres away, the Americans have instituted a similar environmental management system for McMurdo Station and have spent millions remediating old waste dumps.

The government agency that manages New Zealand’s involvement on the ice, Antarctica New Zealand, has sought to be a leader in environmental management. The agency has overseen the writing and implementation of environmental strategies, management plans and guidelines for visitors, and in June will publish a state-of­the-environment report on the Ross Sea Region. This will be the first such report made on any part of Antarc­tica, and will provide a benchmark for monitoring environmental change in the region.

The Ross Sea Region used to be known as the Ross Dependency, and is New Zealand’s slice of the Antarctic pie. Although the Antarctic Treaty does not formally recognise territorial claims in Antarctica, New Zealand has traditionally administered this area, which is the reason for making it the focus of the report.

State-of-the-environment reports are the environmen­tal equivalent of national accounts, but they also identify threats and gaps in our knowledge. They are relatively new to New Zealand. The Ministry for the Environment completed the country’s first national state-of-the-environment report as recently as 1997, following criticism from an OECD environmental review committee that the lack of high-quality data was a harrier to effective envi­ronmental planning and management.

The report identifies two key pressures on the Ross Sea Region environment. The first is the presence of humans and the effects of their activities. Although tourism in Antarctica has attracted a lot of publicity and provoked intense debate, it is scientists who have had the greater impact. Nine thousand scientists in some 78 bases scattered across Antarctica equates to 500 person years spent on the ice each year, compared with 30 person years per annum spent by the 10,000 mainly ship-based tourists. Most tourists only come ashore for short visits, mainly on the relatively accessible Antarctic Peninsula.

The other primary effect is fishing. Although fishing in the vast Southern Ocean is a relatively recent activity, there is mounting concern about the impact it is having on the marine environment and on fish stocks. Targeted species such as Patagonian toothfish are not the only group to suffer. It is esti­mated that as many as 330,000 seabirds, including albatrosses, are accidentally caught on longlines, and by-catch of many as yet uniden­tified fish species is a growing concern.

Secondary environmental pressures arise from global activities, particularly greenhouse gas emissions and the ozone-depleting effects of chlorofluorocarbons. The most immediate impacts of both these phenomena are being felt in Antarctica. For example, the largest ozone hole ever recorded was situated above Antarctica in the spring of 2000, the result of the degradation of an estimated 40 million tonnes of ozone that year.

The state-of-the­environment report contains other worrying statistics. For example, Winterquarters Bay at McMurdo Station (home to up to 1100 people in summer) is one of the most polluted harbours in the world, the result of indiscriminate dumping and sewage disposal. Both the American and the New Zealand Antarctic operations are looking at options for treating sewage, which presently is macerated and pumped into the Ross Sea.

Antarctica New Zealand’s environmental manager, Emma Waterhouse, says the report assembles the latest information on all ecosys­tems in the Ross Sea Region and tells us how well we are responding to environmental issues and human impacts in the area. “This is about providing the information required to make good policy decisions in the future.”For further information on the Ross Sea Region State of the Environment Report visit the Antarctic NZ website, www.antarticanz.govt.nz