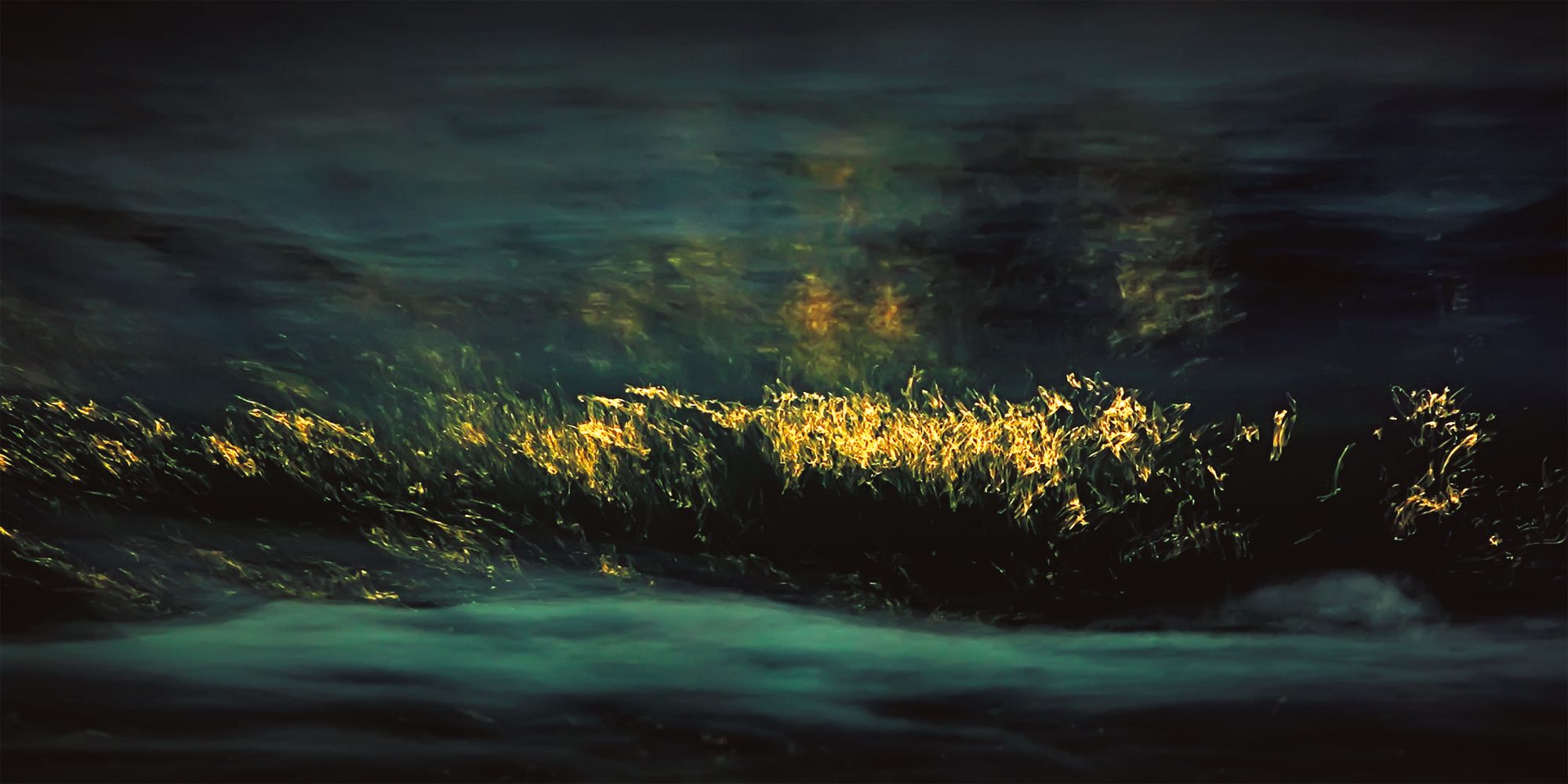 Waiheke Island, some 20 km into the morning sun from central Auckland, is small enough to enjoy a sea view from just about every spot upon it. Small enough, too, for the roughly 8000 people who live there to fancy they all know each other, recognise each other’s pets, and know every corner, every lookout, every beach.

You’d think that in a place like this everybody would also know the sea. After all, they look out over it every day.

But it takes an artist, it seems, to put us straight in this regard. When we think we see the sea, all we have really done is given it a cursory glance to assess it with respect to our particular interest: Does it look like good sailing today? I wonder what the fishing will be like? We may occasionally go as far as remarking on the changing moods of the sea, but seldom any further.

Simple stuff. But the sea, especially its surface, has more to show us than most could dream, and photographer Tom Ives has captured some of its chaotic splendour.

Tom came to live on Waiheke Island a few years ago. His work has been mainly photoreportage with a geopo­litical and humanist bent. Of a very high standard, it has appeared in the world’s leading feature and news maga­zines, including National Geographic and Time.

In turning to the sea, Tom has entered a new world of photographic artistry. As he describes it, it’s been some­thing of an epiphany to appreciate the possibilities of a 35 mm digital SLR camera as if it were a sort of paint­brush, a tool with infinite potential for revealing new in­sight and creating abstract images of profound beauty.

On a day when, to the untrained eye, the light is the same as on any other, when you or I see nothing remark­able as we look out over the water, Tom will take his cam­era down to the sea. He may choose to explore a rocky shoreline, walk an expansive sandy beach or simply stand quietly in the surf and observe.

Most importantly, he is receptive to what the sea of­fers him, and the classic, locked stance of the photog­rapher is gone. Tom dances with the camera; he steps across channels in the rocks, he sways, he waves his technological paintbrush in rhythmic sweeps. He’s a picture of concentration, constantly assessing what he sees in the viewfinder or on the LCD screen, and mak­ing myriad small changes to aperture and exposure. He becomes so immersed in what he’s doing that hours may pass before he calls a halt, and he may take more pic­tures in a session than most of us snap in a year.

From this mass of images Tom distils their quintes­sence. Importantly, he never uses any Photoshop tricks. What you see comes from his eye, via the lens and re­cording sensor in his hands. The images are unaltered “in camera” views—dif­ferent from what Tom actually sees be­cause they record motion frozen over the duration of an exposure.

Out of this comes what I consider the essence of art: something never before seen. Im­agery beyond expectation. Colours never considered. An opening-up of visual possibilities and their transforma­tion into a language of boundless poetry. Images that will always hold an arresting mystery.

The world’s oceans are co-repositories of the natural history of the planet. Within their molecules reside not only the mechanisms of biology but also its spiritual essence.

For me the ocean is a cathedral where I go to meditate by listening to her songs, inhaling her fragrance and tactually exchanging ions, and to give myself to the visual symphony she plays out in different keys at different places. Moving water is like a flickering fire, for neither allows us to possess it. Both elements are like seductresses who beckon us to embrace them, only to dissolve in a tumble of liquid or vanish in a wisp of smoke.

These elusive moments are loci where the physical meets the spiritual and in so doing invites us to surrender to it. In surrendering we receive gifts: peace of heart, joy and healing grace.

I believe the ocean is giving me these gifts to share with others via the photographic medium. She asks only that I approach with no preconceptions, an open heart and passion; I’m trading patience for blessings.

Coming from 30-odd years of photojournalism I invite this exchange. My connection with the sea is a reconnec­tion with the anima mundi, the soul of the Earth.

So today I create fiction, rather than non-fiction, exploring the narrative of the sea in all its beauty, richness and metaphor. The blessing for me is being awestruck by the divine mystery offered by the largest realm of water and life on Earth.

The Island of the Day Before...