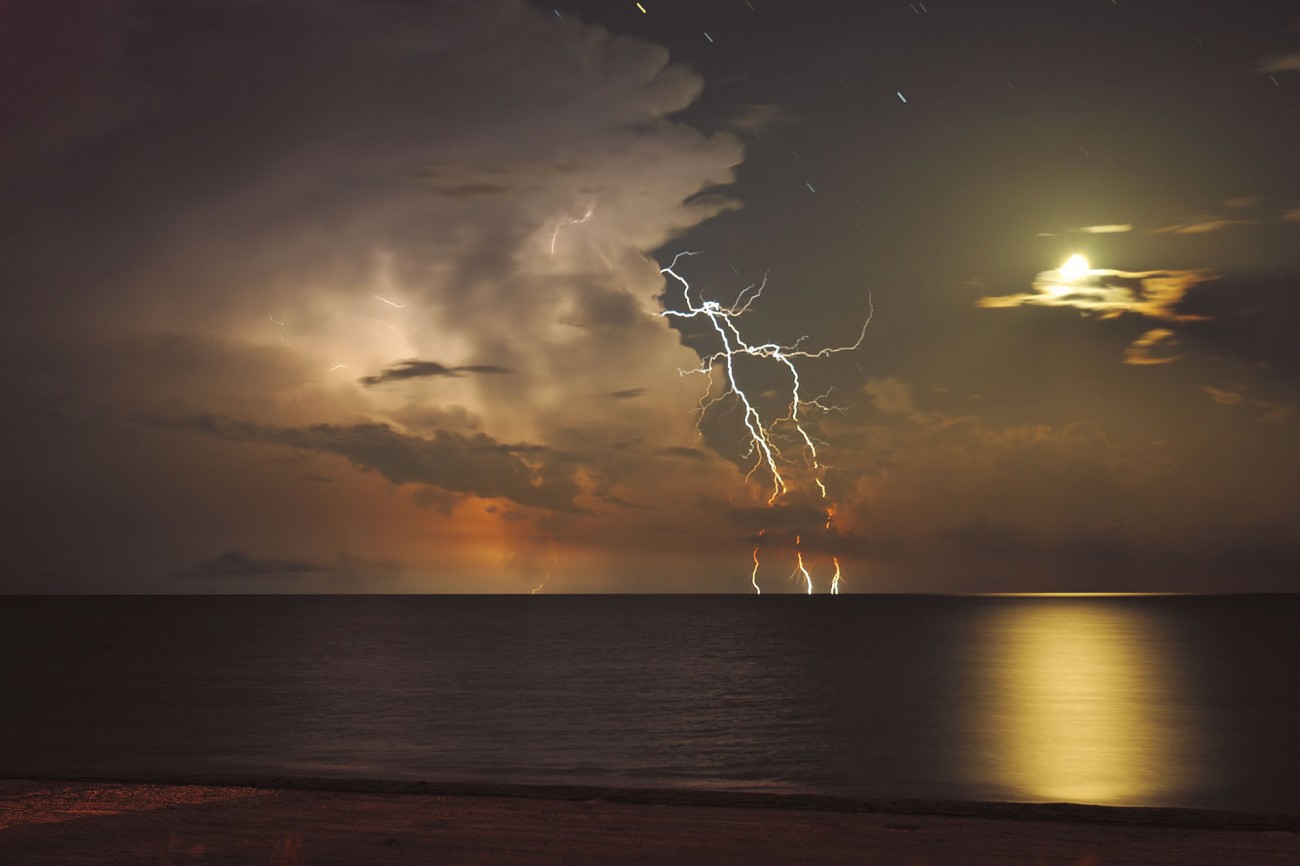 It is estimated that 100 lightning flashes occur on Earth every second, which adds up to a respectable total of more than 8 million a day. New equipment developed in the last decade or so is now able to detect lightning strikes and pinpoint their position to within several hundred metres. This shows that only about one lightning flash in five reaches the ground. The majority stay within the clouds, travel from one cloud to another, or occasionally shoot out from a cloud and stop in midair.

In the United States, an average of about 30 million lighting bolts strike the ground each year. That works out at about one per second though in fact three quarters of the strikes oc­cur in the three months of summer.

Florida is a prime target because of an abundance of heat and moisture and also the fact that it is a penin­sular, so that sea breezes moving inland from opposite coasts collide in a convergence zone kicking off the towering cumulonimbus clouds that give birth to thunderstorms.

Parts of Florida have a lightning density of over seven strokes per square kilometre per year. The frequency of lightning generally decreases as you move north and west away from Florida, although a large part of the central and east­ern States has above three hits per square kilometre per year. However, the west coast and the far north are less dangerous, having less than one hit per sq km every two years.

One interesting discovery solves the mystery of lightning striking from a blue sky. An investigation of a strike that hit an airport worker on a fine day found that the lightning had travelled more than 50 kilometres away from its parent cloud before finally striking the ground.

A network of detection equip­ment was installed in New Zealand just over four years ago. Owned by Transpower NZ, the network is maintained by MetService. Ac­curately detecting the location of a lightning strike on power lines is extremely useful for a power trans­mission company so it knows exactly where to send its repair crews. For MetService, accurate lightning detection provides the opportunity to verify, and thereby fine-tune, fore­casts of thunderstorms, as well as to develop a clearer picture of when and where our lighting strikes.

From a glance at the diagram (next page) it is clear that lightning strikes occur most frequently to the west of the main mountain chains of New Zealand, especially on the West Coast of the South Island. One reason for this is that airstreams from the westerly quarter are the most fre­quent in our latitudes. Storm clouds approaching from that direction usu­ally drop all their rain as they rise up over the mountains and are changed beyond recognition when they reach the lee side of the hills. This is espe­cially true in the South Island where the main divide is roughly twice as high as in the north.

Some thunderstorms occur just ahead of cold fronts and others are in the deep pools of cold air that usually follow several hundred kilometres behind the fronts. Often, these fronts weaken as they ap­proach the North Island, and the cold pools more often track across the South Island than the North.

Among the places with the least lightning are Wairarapa, eastern Gisborne and some inland parts of Southland. There is also a small gap over Lake Taupo where the absence of surface heating makes the forma­tion of thunderstorms less likely.

Lightning strikes are more com­mon in summer than in winter, but the winter strikes usually have a stronger current, averaging about 50 per cent more amps than the sum­mertime strikes. In spring and sum­mer thunderstorms are more likely in the afternoon and evening, whereas in autumn and winter they are fairly evenly distributed between night and day. In summer, the proportion of strikes over land, rather than the sea, is greater than in winter. Also, sum­mertime strikes tend to occur along the ranges, where sea breezes con­verge, such as the Kaimai Ranges, or the Raukumara Range between Gisborne and Bay of Plenty.

The reason for these differences lies in the role surface heating plays in spring and summer. Then sunlight is intense enough to significantly heat the land and consequently the air just above it, making a major contribution to the atmospheric instability that causes the thunder­storms.

In winter the instability comes primarily because of extreme cold temperatures through a great depth of the atmosphere during an influx of polar air. This cold air often causes greater instability in a winter thun­derstorm than occurs in a summer­time storm and therefore stronger upward motion inside the cloud and consequently greater charge separation, ultimately producing a stronger discharge.

The drop-off in lightning strikes in autumn comes despite the fact that temperatures over the land may still be high. The difference is that the air aloft tends to be much warmer in autumn than in spring or early summer, thereby making the atmosphere more stable. Also, the sea temperatures are at their warmest in early autumn, therefore the temperature difference between land and sea, on a sunny afternoon, is not as great as in spring or early summer. This makes the sea breezes weaker in autumn and therefore weakens the convergence of sea breezes from opposite coasts.

Another use for the lightning data is verifying damage claims. One farmer filed an insurance claim for crops consumed by cattle that crossed an electric fence pos­sibly knocked out by lightning. When it turned out that no lightning had occurred, the farmer remembered that he had forgotten to switch the fence on and withdrew the claim! On another occasion a pet cow was found dead under a tree and the owners wanted to know if an over­night thunderstorm was responsible. In fact a strike had been recorded in the vicinity of the tree during the night.

Although it is some years since lightning caused a hu­man fatality in New Zealand, around a hundred people are killed by lightning each year in the United States. This has lead to wide publicity there of the “30/30” safety rule. If you hear thunder within 30 seconds of seeing a flash, you should take cover in a well-constructed building and not leave until 30 minutes after the last thunder is heard.

Many people hit by lightning can be revived with mouth-to-mouth resuscitation. During one of Benjamin Franklin’s experiments, lightning stunned a turkey but it revived when Franklin repeatedly blew into its lungs­ only to then run straight into a wall. Franklin’s invention of the lightning rod in 1766 was a great success and news reached Captain Cook in time for him to take one on the Endeavour three years later. But the news had not travelled to Italy where in 1769 the church of St Nazaire in the town of Brescia was struck at a time when 100 tons of gunpowder was being stored in the vault. The resulting explosion killed 3000 people and destroyed one sixth of the city.

However, not all lightning is bad news. In Queensland there is a crocodile farmer who is convinced that thunder and lightning are an aphrodisiac for crocodiles. During droughts he fakes the thunder by hiring helicopters to fly over the farm, although apparently not all the crocodiles are susceptible to this deceit.

And our very existence may be attributable to lightning.One school of thought in the origin of life debate considers that lightning may have played a pivotal role in combining the right molecules to begin the first stirrings of life.