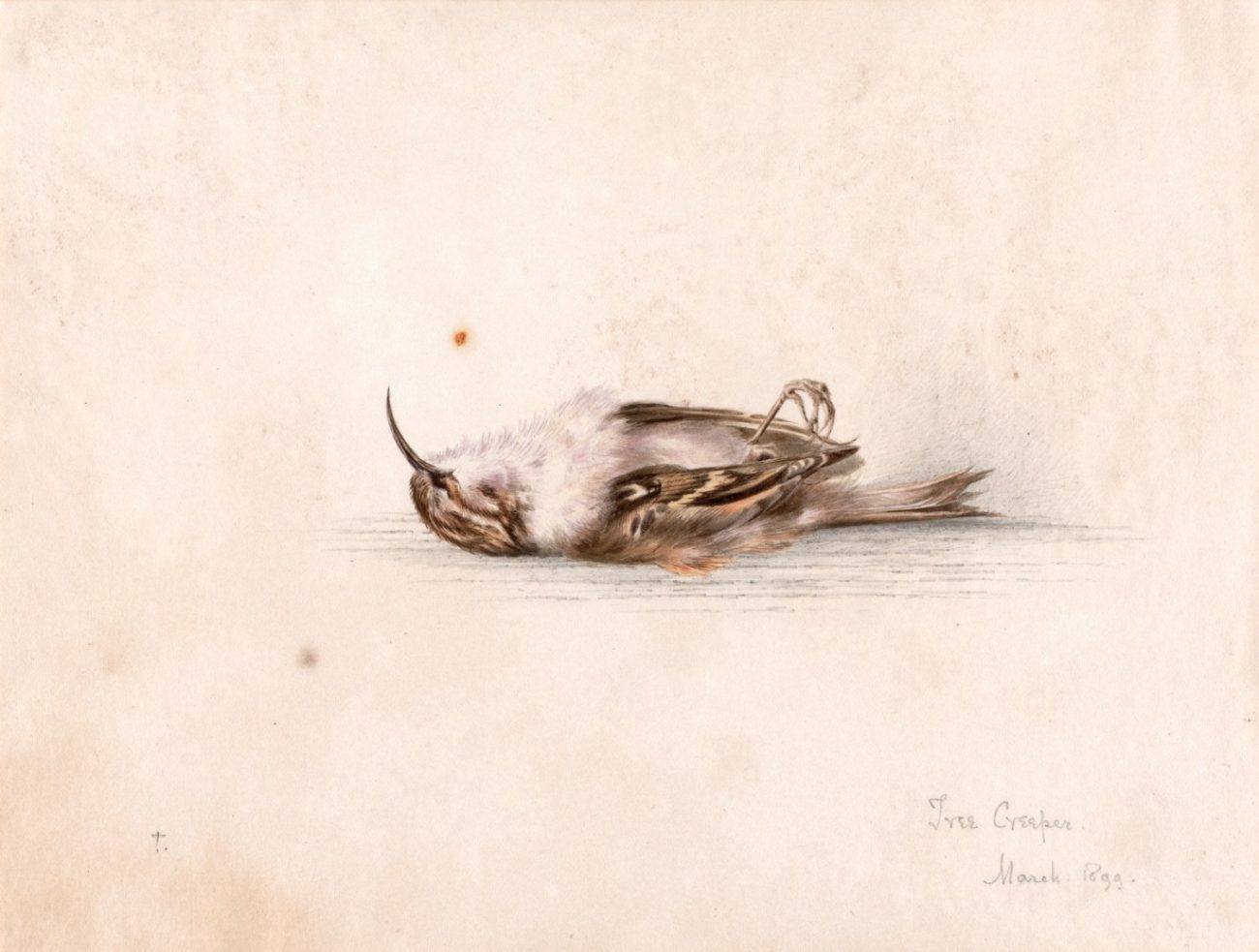 In September 2016, Antarctic Heritage Trust conservator Josefin Bergmark-Jimenez was examining a water-stained paper portfolio retrieved from a bunk in a historic hut at Cape Adare, at the western edge of the Ross Sea.

As she opened the folder she was astonished to find a beautifully rendered, almost pristine watercolour of a bird. So great was her surprise that she immediately shut the portfolio again.

“I then took the painting out and couldn’t stop looking at it,” she said. “The colours, the vibrancy—it is such a beautiful piece of work. I couldn’t believe it was there.”

The painting had lain unnoticed in the hut for more than a century, since the time of Robert Falcon Scott’s 1912 expedition to the South Pole. Its painter, Edward Wilson, accompanied Scott on that ill-fated march.

The painting’s discovery was not disclosed until a few weeks ago. To see it is to marvel that an object of such delicacy could survive the successive freezings and thawings of a century on the icy continent. It is also to admire the hand that created it—and to wonder why he carried this particular watercolour with him halfway round the world to such a forbidding place.

It was through sheer chance that Wilson went to Antarctica at all. He was in the process of completing his medical degree—writing a thesis on atrophy of the liver—when the secretary of the Zoological Society wrote to him suggesting he apply for the position of junior surgeon and vertebrate zoologist for Scott’s upcoming expedition.

But Wilson doubted that he was well enough qualified for the job. There was also a question mark over his health: he was recuperating from a serious bout of pulmonary tuberculosis, a potentially fatal disease. Plus there was a third factor. Wilson was a devout Christian who lived an ascetic life. Pursuits that smacked of vainglory—such as being first to the Pole—would not have appealed to him in the slightest.

On the other hand, this was to a scientific expedition first and foremost, with the chance of exploring and recording in pencil and paint where no human had set foot. For a man whose great loves were nature and art, this would have been a compelling motivation.

All doubts were swept aside when Scott and Wilson met. An immediate liking formed between the two men, which would ripen into an abiding friendship. Reflecting on the opportunity that dropped into his lap, Wilson later wrote, “If I had tried to get it I should have had many doubts, but it seems given to me to do.”

As always, Wilson saw the hand of destiny. Like St Francis, his spiritual role model, he regarded God and nature as part of the same continuum. Art was the expression of that mystical union.

“So tightly was drawing or painting tied up with Truth for Wilson, that its execution became for him a form of prayer,” notes an excellent online biography.

“My little bird-pictures are just visible proofs of my love for them and attempts to praise God . . . and that’s why I love to give them away and hate to sell them,” he wrote in a letter to his father.

To his wife-to-be, Oriana Souper, he wrote:

“My pictures are the realisation of little things that have been treasured up in my mind, little traits of character picked up crumb by crumb in the fields and by hedgerows, at last pieced together and put into the form of something living.”

Of a drawing of a snake’s head he wrote, “In that little head and one eye is all the fascinating quickness and supple gracefulness of all the snakes I have known.”

Of another picture, “The whole concentrated beauty of that glorious Norwegian forest at midnight is what I see in the picture of the sparrow-hawk’s nest.”

Wilson had travelled to Norway and Switzerland for their therapeutic climates after contracting tuberculosis in 1898. While he was a patient at a sanatorium in Davos, he painted the picture that ended up at Cape Adare—a Eurasian treecreeper, an insectivorous songbird that climbs tree trunks like a mouse. (The species is not related to New Zealand’s brown creeper, or pipipi.)

During this period he would sit for long hours in the woods, wrapped in his cloak, observing the natural world, with “Modern Painters, the New Testament and a good deal of pain” for company. In Norway, he had to contend with another form of pain besides his damaged lungs: hordes of mosquitoes.

Capturing the colours of a Norwegian sunset takes “a lot of yellow paint, a cast iron resolution and a power of tobacco to sit and sketch”, he wrote to his parents. Perhaps an indication of his capacity to endure suffering, he sketched the mosquitoes as they fed on him, capturing their appearance before and after their meal.

In his 18 months of forced convalescence, Wilson developed a skill he had learned in childhood to its full extent: learning to memorise and reproduce the colours of nature, such that he achieved almost perfect colour recall. This ability would stand him in great stead during the months of man-hauling sledges in the Antarctic, when he would not have had his paints with him.

He and Oriana married in July 1901. Three weeks later, he was on Scott’s ship Discovery for his first taste of the great white south. Then, in 1910, he departed for Antarctica again, as Scott’s chief of scientific staff. For this expedition, Scott wanted him not just to lead scientific work, he also wanted Wilson beside him on the push for the Pole. Scott and Wilson had grown close. Indeed, all the men of the expedition admired Wilson’s dedication, fairness and judgment. He proved as good as mediation as he was at medication, and his colleagues nicknamed him ‘Uncle Bill’.

“Words must always fail me when I talk of Bill Wilson,” wrote Scott. “I believe he really is the finest character I ever met.”

That esteem lasted to the end. When the tent in which Scott and Wilson died was discovered in November 1912—just its apex protruding from the snow—Scott was found to be partly out of his sleeping bag, with his arm extended to where Wilson lay. A final moment of human warmth before the cold claimed them.

Back to the bird: why did Wilson take a painting he had made a decade earlier in Switzerland with him to the ends of the earth? And how did it get to Cape Adare? Wilson was in Scott’s main party, based at Cape Evans, 700 kilometres south of the northern party at Cape Adare. Was it a gift to someone in that party?

We may never know. Perhaps there was simply something about that painting that spoke to Wilson. A dead songbird on a snowy white background. Beautiful, for all its sorrow.