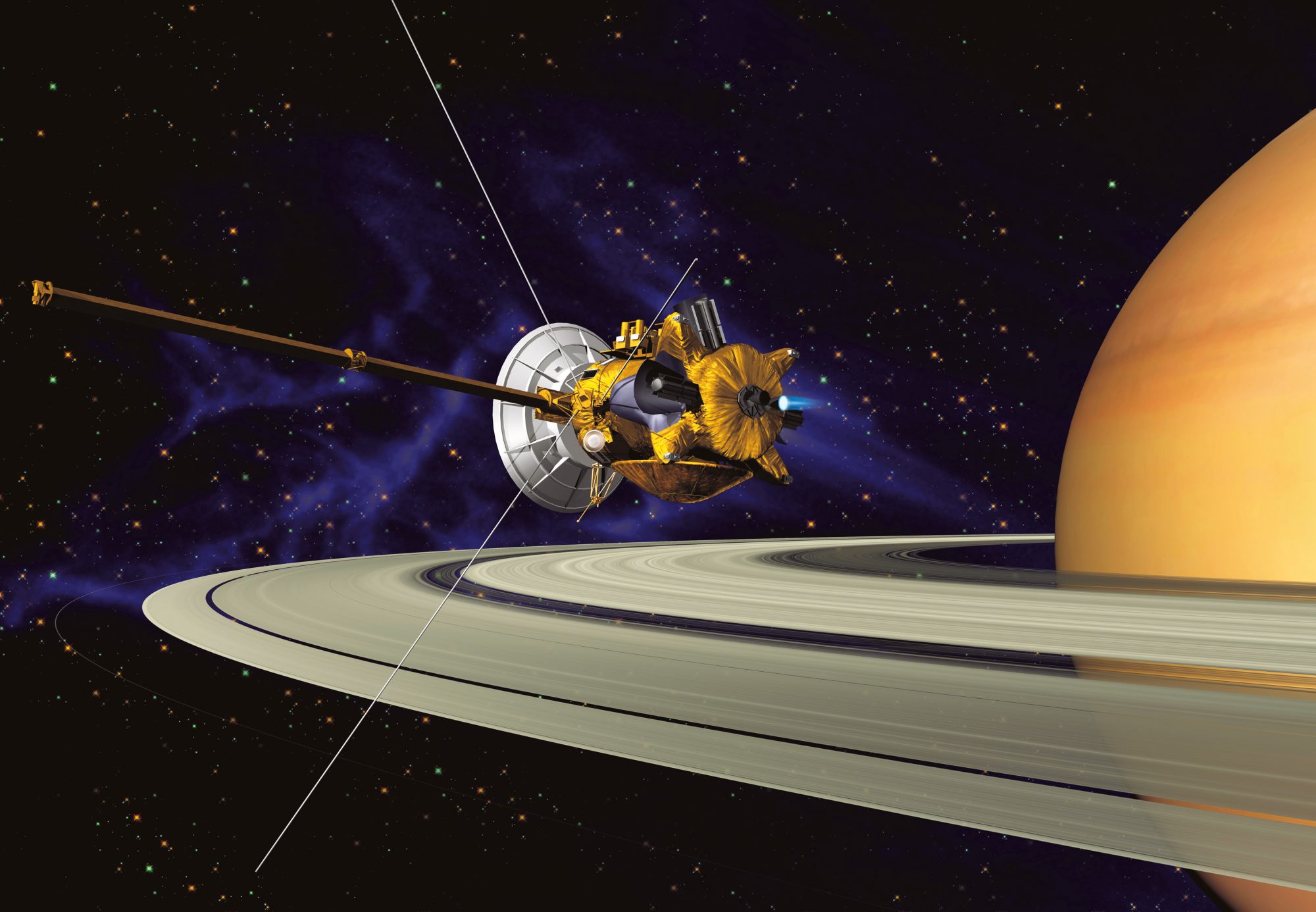 It makes for a ripping science fiction yarn. In 1997, NASA launched a new high-tech spacecraft on a mission of discovery—to explore a beautiful but mysterious planet that has been pinpointed in a stable orbit outside that of Jupiter. The spacecraft performs two gravity-assisted flybys of Venus, building up sufficient momentum to fling itself at its target. In August 1999 it hurtles past Earth amid a flurry of doomsday predictions from Armageddonists. This trajectory gives the craft an added kick and, 16 months later, it fires postcards back from Jupiter as it slingshots around the tempestuous gas giant. Three and a half years after that, the spacecraft reaches its target—a hazy, yellow-tinted, ethereal world, visibly flattened at the poles because of its fluid composition.

Following this script flawlessly, Cassini, a robotic craft, slipped into Saturn’s orbit on July 1, 2004, seven years after its launch and bang on schedule. Since then the craft has ma­noeuvred around Saturn’s neighborhood capturing stunning images of the planet, observing stray ice boulders and even swooping through a clear lane in the magnificent system of icy rings. A day into its work, Cassini cruised past one of the most enigmatic bodies in the solar system: Titan, the largest of Saturn’s moons.

Pale orange, organically rich, and boasting a double-tiered atmosphere, Titan is believed to host the same precursor molecules as spawned life on Earth. Covered in cloud and smoglike haze, it is the only body in the solar system beside Earth that might have oceans—albeit semi-viscous ones of ethane–methane—and weather systems with rainfall. With the surface temperature a chilly –177° C, water ice is as hard as granite, yet physical similarities with Earth could be compelling.

Whereas exploration rovers Opportunity and Spirit have posted back images of a sterile, dusty and rock-strewn landscape from their jaunts across the red planet, Mars, Cassini may well encounter features familiar to Earthlings: mountains, canyons, snowfields, lakes and rivers, shorelines, and maybe even wind-blown waves. Radar images have revealed reflective areas that appear textured, perhaps corresponding to rougher terrain, and darker, flatter areas, hinting at liquid bodies. Altogether, the picture is one that implies diverse geologic and atmospheric processes.

On board Cassini is Huygens, a European Space Agency probe, which will detach itself on Christmas Eve and perform a parachute descent through the moon’s atmosphere on January 14, 2005. If all goes to plan, Huygens will capture 1100 images over two and a half hours and—assuming it survives landing—will continue to transmit data from Titan’s surface. Scientists suspect the probe could document an alien landscape unrivalled in the entire history of human exploration.

Meanwhile, Cassini is scheduled to conduct 74 orbits around Saturn over four years, allowing us to peer through its lens at this distant mesmeric system. Foremost among the orbiter’s objectives is a closer examination of the rings—known to be composed largely of ice fragments ranging in size from tiny particles to chunks several me­tres across—which en masse exhibit unexplained features, including wave patterns and spokes. Determining how the rings formed should lead to a better understanding of larger-scale disk systems, such as our solar system and galaxy (the Milky Way System).

Satellites besides Titan will also receive attention, including Enceladus. Enceladus has the highest albedo (reflective brightness) of any body in the solar system. Its surface is dominated by fresh, untainted ice, and much of the surface is smooth and relatively young. This suggests recent, even current, thermal activity—perhaps water volcanism. Enceladus is too small to be heated by radio­active decay, and gravitational resonance with Saturn’s 12th moon, Dione, should not be sufficient to melt ice unless of a composition with a low melting point.

Cassini will scour Enceladus for geyserlike volcanoes, which might also reveal the source of the fresh icy mate­rial in Saturn’s tenuous E ring. Confirming such activity would raise speculation as to whether this satellite hides a liquid layer beneath its surface, like that of Europa, one of Jupiter’s moons.

The moon Iapetus will also fall under Cassini’s scru­tiny because of its unique surface. While one half of this satellite—the trailing hemisphere—is snow-white, its other half—the leading hemisphere—is pitch-black and thought to contain complex organic compounds. The dividing line between the two hemispheres is inexpli­cably sharp—so pronounced, indeed, that astronomer Giovanni Cassini, who discovered Iapetus in 1671, noted that he could see the moon on only one side of Saturn: it vanished on the other.

With our own planet mapped from pole to pole, the dream of exploring strange new worlds has become the greatest challenge we can contemplate. After Neil Armstrong’s giant leap for mankind, we stepped into a larger theatre—one that now extends to the fingertips of the Sun’s embrace—and the Cassini–Huygens project is the latest episode of an ongoing adventure. Watch out for a steady flow of amazing images, especially from Titan, in the coming months. Regular updates are posted at: http://saturn.jpl.nasa.gov/

They appear solid from Earth, but the rings of Saturn are actually composed of countless small particles—ranging in diameter from a few milli­metres to several metres—each in an independent orbit. Occasional chunks may reach a kilometre across.

If all the rings were compressed into a single body it would be less than 100 km in diameter. Although Saturn’s rings appear exotic, rings and spirals are among the most common features of the cosmos. Our solar system can be viewed as a scaled-up set of rings round the Sun, and the other larger planets—Jupiter, Uranus and Neptune—also have rings.

Rings form in gas and dust clouds as a result of the competing effects of gravity—the condensing of matter toward a central plane, and rotation, which applies a centrifugal force that opposes the gravitational collapse of that plane.

Angular momentum must be conserved: a rotating object that is contracting spins faster as it shrinks, and near objects orbit faster than distant ones. Mercury has a much shorter year than Earth, whereas a year on Saturn is equal to 29.46 Earth years.

In a continuous ring system, like Saturn’s, pebbles, rocks and boulders rotate at different speeds, which means that heat is generated from collisions. As this dissipates, angular momentum is transferred outwards. Saturn’s moons counter this tendency to spread, acting as reservoirs of angular momentum. They are said to “shepherd” the rings in their positions.

There are complex tidal resonances between some of Saturn’s moons and the ring system: some of the moons—the so-called “shepherding satellites” (Atlas, Prometheus and Pandora)—are clearly important in keeping the rings in place; Mimas seems to be respon­sible for the paucity of material in the Cassini Division, which may be similar to the Kirkwood gaps in the aster­oid belt; Pan is located inside the Encke Division. It is an intricate arrangement, and poorly understood.

The origin of Saturn’s rings is unknown. Although the planet may have had rings since its formation, the system isn’t stable and must be regenerated periodically, perhaps by the break-up of larger satellites. The current set of rings is probably only a few hundred million years old.

Ringing out the year