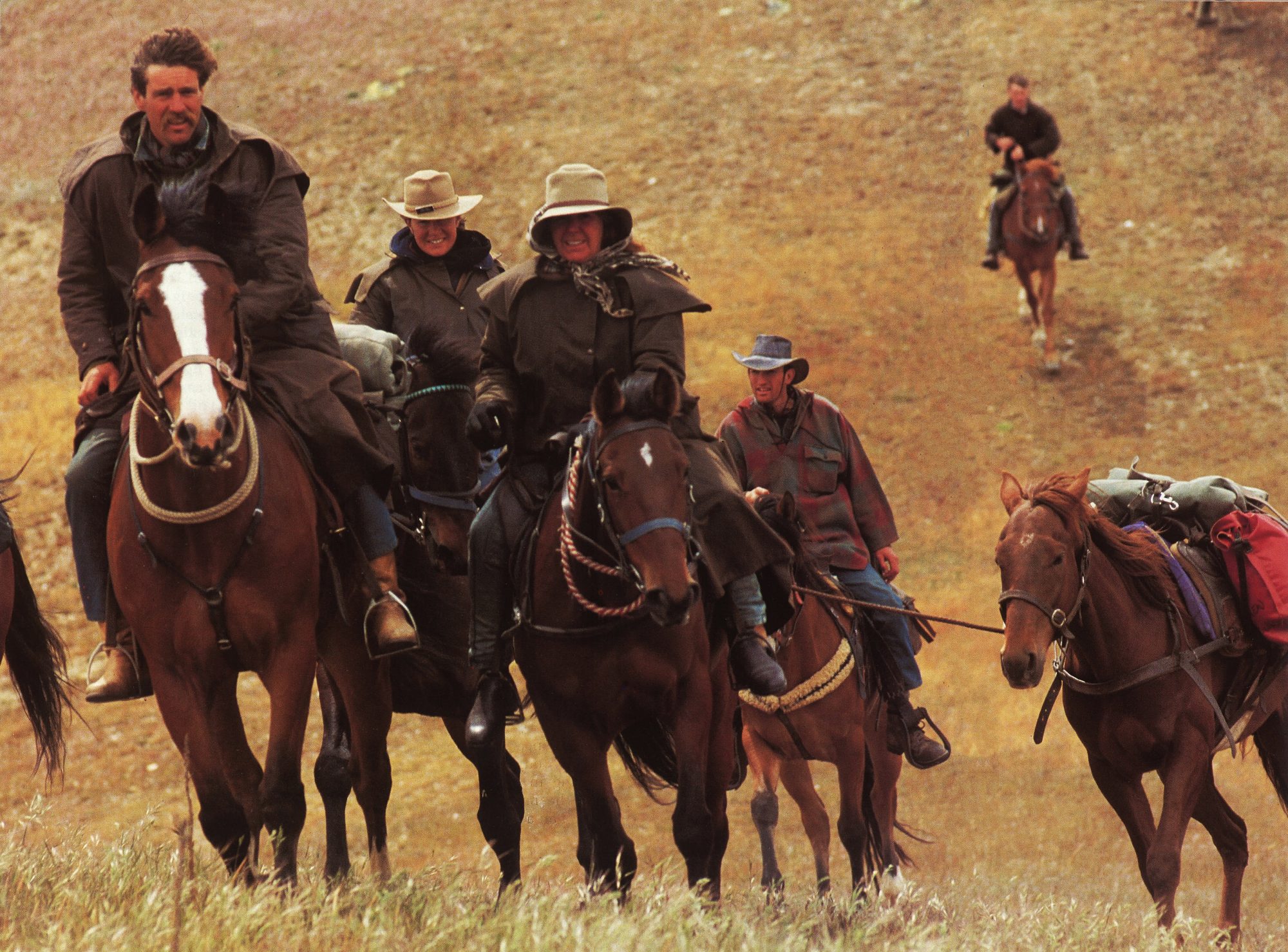 When two californian prospectors startled the Dunedin treasury office by bringing in 87 pounds of gold in 1863 the name Dunstan was little more than a scratching on a survey­or’s map.

As news of Horatio Hartley and Christopher Reilly’s magnificent haul spread, the name sparked an exodus of the able-bodied for the new El Dorado. Incoming ships bringing prospectors from Australia and Great Britain lost their crews to the new bonanza, and Dunedin storekeepers wrung their hands as their staff deserted them. “The Dunstan”, like Gabriels Gully 18 months earlier, was to become an irresistible magnet to thousands of fortune seekers.

It was mid-winter, 1862, when Hartley and Reilly found gold in the Cromwell Gorge, a few kilometres downriver from Cromwell. The Clutha (known then as the Moly­neux, after Robert Mollineux, sail­ing master of the Endeavour) had been unusually low that year, reveal­ing shingle flats that could be panned and sieved for their gleam­ing booty. Hartley and Reilly had lost their gold pan, and used bare hands and a broken shovel. Those who followed were scarcely better prepared; some perished in the harsh landscape, many returned to Dunedin emptyhanded and disillu­sioned, a few became wealthy over­night. One prospector is said to have taken 200 ounces of gold from a crevice in a single panning.

Maurice Shadbolt records that these men “had to gamble their lives against a pitiless landscape. There was little fuel to warm them, no food to sustain them. Supplies were slow following. The territory was track­less and the climate murderous. Summer heat maddened as frosty valleys became furnaces. Winter cold drove some to suicide.”

It was into that pitiless landscape that 220 horses, a Clydesdale team, a coach and assorted wagons rode in November 1991 in the first Dunstan Cavalcade, a four-day trek over the 160km trail used by diggers to get to the goldfields.

In fact, there were three ways prospectors could get to the Dunstan. One route, from Tuapeka, followed the Molyneux River all the way. A second, the Pigroot, took a traveller north from Dunedin to Waikouaiti by boat, then turned in land via the Shag Valley. The third,and most direct, route was known as the Mountain Track. It was 50km shorter than the Pigroot, but re­quired the crossing of four mountain ranges: the Lammermoors, the Rock and Pillar Range, Rough Ridge and the Raggedy Range.

To gold-hungry prospectors time was precious, and most preferred to take their chances with the unpre­dictable weather and desolate, unstable countryside offered by the Mountain Track. In time, the route became known as the Dunstan Road.

A hundred and thirty years ago, punters could travel the Dunstan Road by five-horse coach, and stop at one of a number of stores, accom­modation houses, and sly grog out­lets which sprang up along the route. In those hardy days all the miners’ provisions had to be carted in from Dunedin—a two- or three-week round trip by horse-drawn dray, and even longer for a bullock wagon. So vital were the wagoners’ supplies to the isolated canvas-town communities of prospectors that prices could be pushed sky-high. Provisioning became a surer way of making a fortune than panning.

Even so, the route to the Dunstan was no cakewalk. In places two or more teams were needed to pull a single dray up a steep incline, and on the descents a large rock was of­ten tied on behind to slow the lurch­ing wagon as it careered downhill.

In this parched, waterless land­scape a gimlet and straw were said to be part of a wagoner’s essential equipment. A small hole in one of the liquor barrels being transported to a hotel or grog shop, a long thirst-quenching pull on the straw, a peg and some wet soil to hide the evi­dence . . . a smile on the face of the wagoner.

There were few smiles on the faces of the 1991 cavalcaders as we cocked our akubra hats to the south­erly blast and picked our way up the Rock and Pillar on our first day on the trail. This is barren territory, strewn with rocks in any shade of brown, with clumps of sparse yel­low grass and golden tussock. The sheep station here is called Rocklands —it could hardly be any­thing else—and rocks are even used as fence posts.

In driving rain we crested one bald brown ridge after another, thinking that each might mark the beginning of the descent, but know­ing we had several hours of rocks and pillars in front of us. Hands and faces froze, and as rain turned to horizontal hail, bodies and steeds moved closer together in the futile hope of finding shelter.

As we climbed to over 1000 me­tres we were five abreast, with the hail battering and soaking horse and rider alike. I had no fear of losing my hat to the wind. It was clamped to my head with the wet, perhaps fro­zen there. Nine of our number were bundled into support vehicles suf­fering from hypothermia, but for the rest of us the blizzard blew and whipped for an eternity.

A pit stop and a strongly laced rum truffle restored morale, and the afternoon ride to the Styx Creek was a dream compared with what we had just endured.

That night, in our own version of the 1860s grog tent, hot food and cold ale loosened joints, and John Grenell’s songs of the high country and the road set the right rustic mood. We were a mixed bag: a coun­try music star, a poet (Naseby’s “Blue Jeans”, aka Ross McMillan), New Zealand’s champion cowboy Dion Church, plus experienced high country people, top dressage and eventing riders, and even two side­saddle exponents. A wagon team of six Clydesdale horses, the Cobb and Co coach, and ten other carts and wagons rode on before us.

As we eased our aches in imag­ined hot baths, the stories grew tall, but even the most experienced musterers from the area agreed that our storm had been one of the rough­est and riskiest they had encoun­tered.

Over the next two days gale force winds continued to challenge the line-up of akubra (stockman’s) hats as we forded rivers, followed dusty tracks and cantered across tussocky farmland. Oddly, for Central Otago, we rarely spotted rabbits; they must have felt vibrations from the horses’ hooves well in advance of our ar­rival.

On the fourth day, as we entered the Cromwell Gorge, the winds turned northerly and the sun shone. Faces quickly became mudpacks as wind-borne dust whistled down the gorge and coated the cavalcade. This would be the last time that such a trek could use the historic Fruitgrowers Road on the west side of the Clutha River, opposite the new highway. (Lake Dunstan has now buried this orchard road for­ever.)

A dramatic entry was planned at Cromwell, with hundreds of onlook­ers turning out for the opening of the resited and restored buildings in “Old Cromwell”, the historical pre­cinct built by residents when the town’s main road fell to the Clyde Dam development. Two galloping horsemen roused the crowd and attempted to rob the Cobb and Co coach as it entered the town, but in true western style the bandits’ es­cape was blocked by cavalcade trail boss Bill McMillan, who forced the miscreants to hand back their stolen “loot”.

Night fell and Cromwell buzzed with laughter as exhausted caval­caders square-danced the locals off their feet to the tunes of John Grenell and the Pog’n’Scroggin Bush Band. A Ranfurly rider, David McAtamney, stole the show later with a farewell opera song, and Blue Jeans summed up the ride with a poem specially written for the occasion.

In the morning all that was left was to award prizes for Sorest Bum, Greenest Trailrider, Most Difficult Horse to Catch, plus others, and to take our leave of our fellow riders. As I loaded my little borrowed mare into the horsefloat I took a last look back towards the mountains and wondered when another opportu­nity to experience history so vividly would present itself.