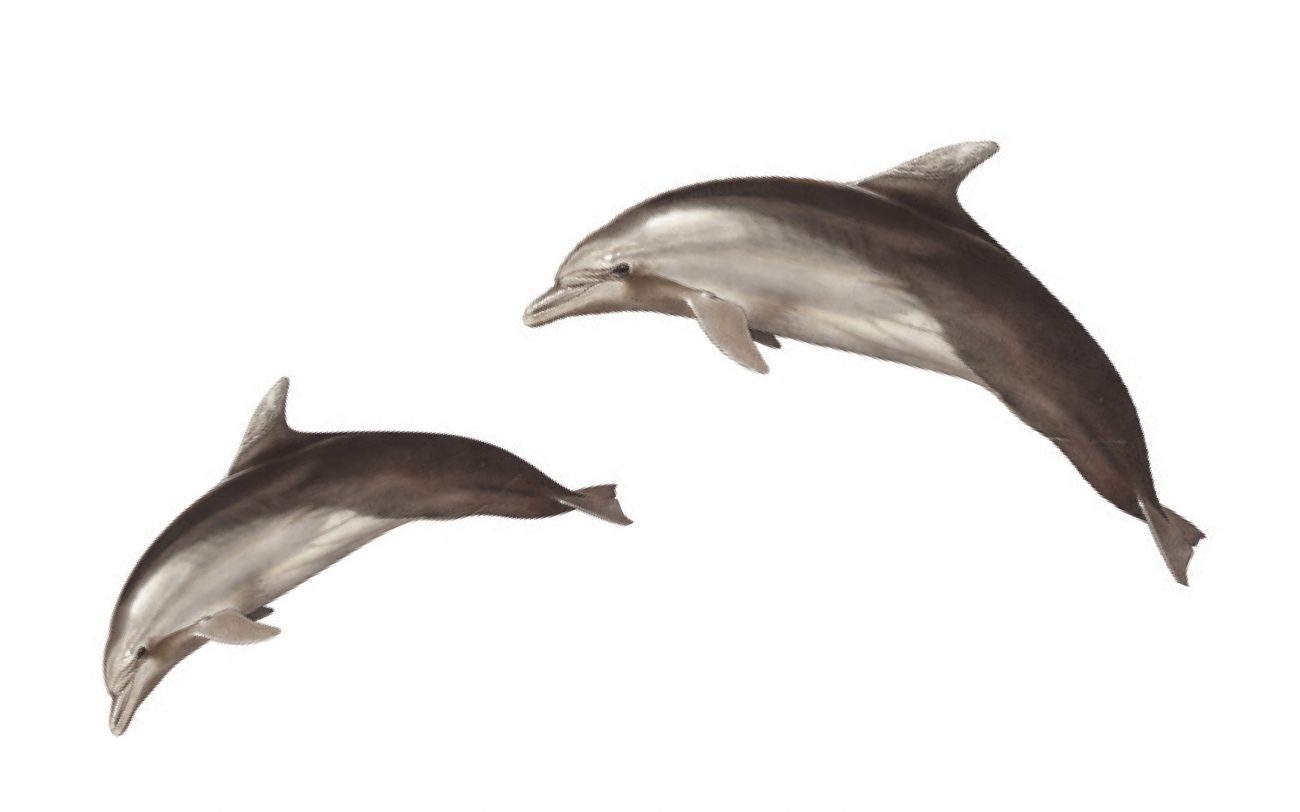 Twenty nautical miles from land, I slipped into water 350 metres deep, dived down five metres, and waited. I could hear them before I saw them—a serenade of a hundred voices. And then they appeared, a mob of galvanised bodies surging towards me—bottlenose dolphins like fighter jets and the long smooth fuselages of pseudorca.

They pirouetted and sang in whistles and moans, they cavorted and turned about me, above me, below me. Some would arrive, then vanish, then swing back in for another look. Others swam past as if I wasn’t there.

In that moment, the world had my full attention, as though I had been summoned from sleep. And when I eventually surfaced, I came out of the water a different man than the one who had slipped in a few minutes before.

It was like a baptism. I had entered exhausted by work and modern life and aware of a withering of the senses that I had accepted as a symptom of middle age. I had accepted, to some degree, that mine was now a life of work, family maintenance and acquisition.

With my wife, I had bought a house, had two wonderful children and was running a publishing company that produces this magazine. It was rewarding, but the requirements for raising young children (security, routine, paraphernalia) and those of running a business (security, routine, infrastructure) were antithetical to the life of adventure and wildness I had led in my 20s.

I had become preoccupied with home renovation, boat restoration, television drama and uncharacteristically interested in American politics and consumer technology. I was sent into fits when a laptop charger was shipped without a cable, or my cloud backup wouldn’t sync. I had become bogged in a marsh of my own making—a swamp that I stoically assumed was necessary if I wanted a family and a business, but a place in which I was no longer particularly comfortable.

I yearned for the blue horizon of the open ocean—a place without rules, where one lives by one’s wits and privileges experience over certainty. And then when it happened, just now, surrounded by whales and song, it had rattled my core. It was restorative, and liberating, and notions of wildness and freedom and connection echoed around my mind. What the hell happened down there?

Sunlight danced on the wavetops as we returned to Auckland. It felt more like flying over the sea than riding through it.

Making landfall was a shock. At the marina, the stone shore met a square kerb of concrete, and the concrete footpath that abutted it extended a metre to a concrete gutter, then a swathe of asphalt car park. Down the road a contractor heaved on the pump handle of a backpack, releasing a fine mist of herbicide along the four-millimetre-wide tolerance between the asphalt and concrete, where fine green shoots dared to spring from the pavement edge.

On the other side of the road, the asphalt met a concrete driveway, where a 600-millimetre-wide garden supported a glossy clump of verdant Mondo grass and a scattering of artfully arranged succulents. Then there was the concrete wall of a house with glass balustrades, kwila decking and 150 square metres of carpet and polyurethaned bamboo. Much like the one next to it, and next to that.

I strained to see a single specimen of vegetation that might have sprouted here a century ago—they have long been plucked out, sprayed out, burned down, replaced by concrete, glass and lawn.

When did we become an archipelago of motorways, golf courses and dog walkers? When did the march of pasture and concrete devour our lowland forests and estuaries? Can we ever go back to our native flora and fauna? Do we even want to?

Movements such as Predator Free 2050 suggest a general desire for native things to thrive, but they stop short of the notion of re-wilding our suburbs and cities, or allowing native vegetation to encroach on revenue-generating farmland.

At least, this is the situation on land. At sea, we give the rampant machinery of nature more room, so long as we can continue to harvest for economic gain.

I’m not sure we can invite nature in on our own terms. Allow it to penetrate, and it blows your world wide open. So where do we draw the line between the needs of our species and those of others?

Out there, under five metres of salt water, those lines all shifted for me. They’re now a tangle of competing ideas that I’m still unravelling now, even as I write this. Can we make room in our society for the wild lives of others? And can we re-wild our suburbs without re-wilding ourselves?