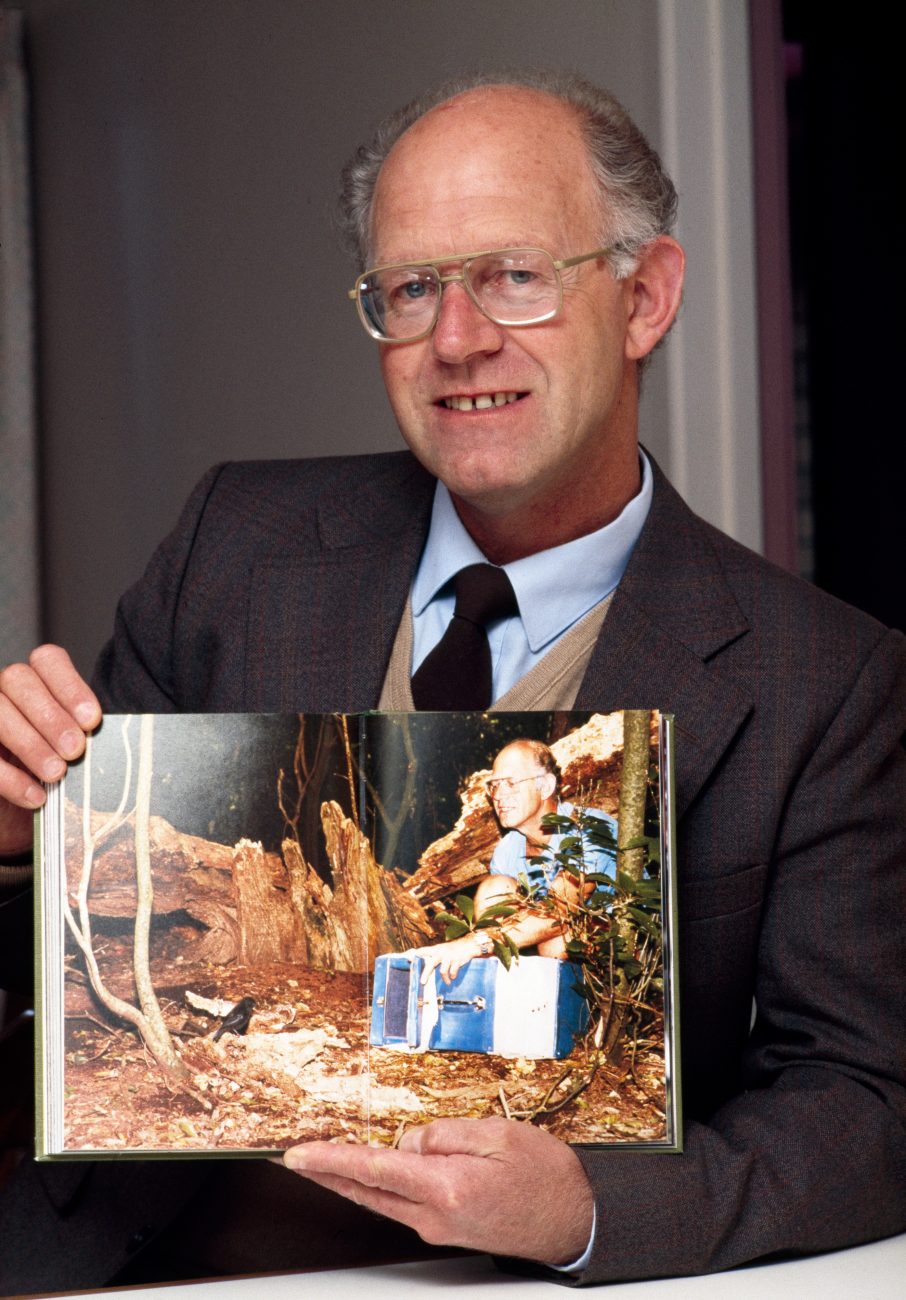 Don Merton’s career in saving rare birds may well have been mapped out for him at the tender age of four, when he and his brother would collect goldfinch chicks from Wainui Beach at Gisborne and give them to their grandmother’s canary to raise.

Half a century later as he battled to save the black robin from extinction, that early attempt at fostering a chick from one species with a parent from another would come back to him, strengthening his conviction that the only way to save many of New Zealand’s rare birds is by being bold and being radical.

“There simply isn’t time to test pretty theories,” says Merton. “Rare species can’t wait. A third of all our birds are either rare, threatened or endangered. We can’t just go along thinking nature will sort everything out.”

Don Merton never wanted to do anything else than work with wildlife. He trained in the New Zealand Wildlife Service at a time when the organisation had a strong research backing and a practical, team-based approach to species management. “But no money,” he says. Then, as now, saving endangered species moved hearts more than it moved chequebooks.

“We achieved some amazing things, though,” he adds. He was involved in developing new techniques of capture and transfer of birds, centring around the use of tape recorded calls and decoys to lure them into mist nets, and then shifting them to new locations in specially constructed boxes.

“No sooner had we perfected the technique than rats got on to Big South Cape [Stewart Island] and we were able to move in with confidence and save the saddlebacks from extinction. That was the first time in the world that a bird in imminent danger of extinction had, through direct human intervention, been restored to viability in the wild.”

The success did not go unnoticed. Requests started to come in from around the world for the New Zealand Wildlife Service to assist in rare species work. One of those requests had to do with Christmas Island and its rapidly declining populations of native birds.

Merton likes a challenge. In fact, the greater the impossibility quotient, the better he likes it. Christmas Island was just such a challenge. The island’s resources are owned jointly by the Australian and New Zealand Governments and Australia asked the New Zealand Wildlife Service to come to the rescue of threatened species there. The nine endemic bird species were all under threat from habitat loss due to phosphate mining on the island. Bird numbers were plummeting as the jungles were being cleared. One bird, the rare Abbott’s booby, had the unfortunate habit of nesting in trees above the best phosphate deposits. It was in serious danger of extinction, yet the controlling mining interests were unconcerned.

“The managers of the mining operation were old school types with no concept of conservation values,” says Merton. “We argued with them till we were exhausted, but finally it sank in, especially when we talked about the children and what they would think if we let the native birds become extinct.”

Success came in the form of part of the island being set aside as a national park. From being opponents, the mining companies changed tack and became very supportive, filling some mines with topsoil and planting trees. Now the children are taught conservation in school.

It is a situation that has been repeated elsewhere, with the noisy scrub bird in Western Australia and the echo parakeet on Mauritius. In each case Merton was fighting against the odds to save birds that were in imminent danger of extinction.

Merton is a realist, and he admits that he gets depressed when he thinks about the enormity of the problem we face even in our own country. Despite Zealand’s strong conservation movement, Merton doubts whether we have the resources of people or funds to avoid further extinctions here.

“Endangered species management is such a vast field, such an exciting field, but it’s still in its infancy. It’s shoestring budget territory and it really exploits the dedication of those who take it up. To work effectively in this area you have to live with the animal—eat, drink and sleep it, think about it constantly until you instinctively know the right thing to do.

“New Zealand is a leader at the moment, but if we don’t get more people involved we’re going to lose more species. The kakapo is one of the most remarkable animals alive today, yet it’s on the brink of extinction and it’s up to this current generation to save it. If we lose it, it’s gone forever. Nothing is more important; this bird is top of the tops.”

To Don Merton any extinction is a national tragedy and an international loss. He remembers the photographs he took of the Stead’s bush wren and the Stewart Island snipe, both now extinct.

“At the time we didn’t appreciate the drama of it all. Most of us thought saving species was a darn sight easier than it really is. Every time I see that photo [of the wren] I think, ‘If it happened in my lifetime, it will probably happen again.’

Merton talks wistfully of the Wildlife Service, its training programmes, its people. “It takes a crazy kind of dedication to do this work,” he says. “In 30 years of being in the Wildlife Service only a handful excelled in the rare species area. Then they would get married and their spouses wouldn’t let them go away for three months or six months at a time. Not too many people have a knack with animals or the commitment to it or the personal freedom to do it. And most want to get on and move up the career ladder.”

He looks around his “tiny little chookhouse of a cubbyhole” in the Department of Conservation and wonders who will take up the challenge.

As he says, “Rare birds can’t wait for the economy to pick up.”

And now there's a hundred...

Old Blue again became the toast of Parliament Buildings in the last week of November 1988.

On the day this issue of New Zealand Geographic went to press the Minister of Conservation, Helen Clark, jubilantly announced that the official black robin census for the season showed there are more than 100 birds in the Chatham Islands population.

Even happier than the politicians was Don Merton, who in a scene of intimate family excitement, broke the news first in a radiotelephone call from the Chathams to his wife Margaret at home in Upper Hutt on the night of November 29.

While we listened in on another telephone, Don said he was “absolutely delighted” with the head count. The official number is 53 adult birds and 56 new chicks and the breeding season is not over, though there will be some mortality loss yet.

“And all this is from just one breeding female—Old Blue,” he said. “I feel the black robin is now out of danger.”

The story of Old Blue is both incredible and remarkable. Central to it is the man Don

Merton, who has fought and worked to save the species since 1975 when the seriousness of the black robin’s plight was revealed by Doug Flack, a scientist assigned a research project on the robin by the Wildlife Service. At that time the number of birds was about nine.

Don’s job was to manage the black robin population, then confined to sparse Little Mangere Island. Because of the island’s deteriorating habitat, his first major exercise was to transfer the birds to nearby Mangere Island. The difficult and dangerous transfer was successful but by 1978 the number of birds had dropped to five, despite the birth of several chicks to Old Blue, one of the two females in their number.

Don’s next move was to try an unproven “cross-fostering” technique. The idea was to transfer eggs to foster parents, not of the same species, and thereby prompt the original parents to produce second and even third sets of eggs.

With limited success using the friendly Chatham Islands warbler to foster the eggs, Don was forced to try the tomtit on South-East Island. This involved starting a second population in 1983. Again it meant taking further risk with the precariously small population. But over the next three seasons the population soared to 38.

Don’s dream is now to establish a third black robin colony on the nearby 6000ha Pitt Island.

The significance of Old Blue was only realised after her death in 1984 at the incredible age of 14 years, more than twice the normal black robin life span. Effectively, she was the only breeding female between 1979 and 1983. She saved the species.