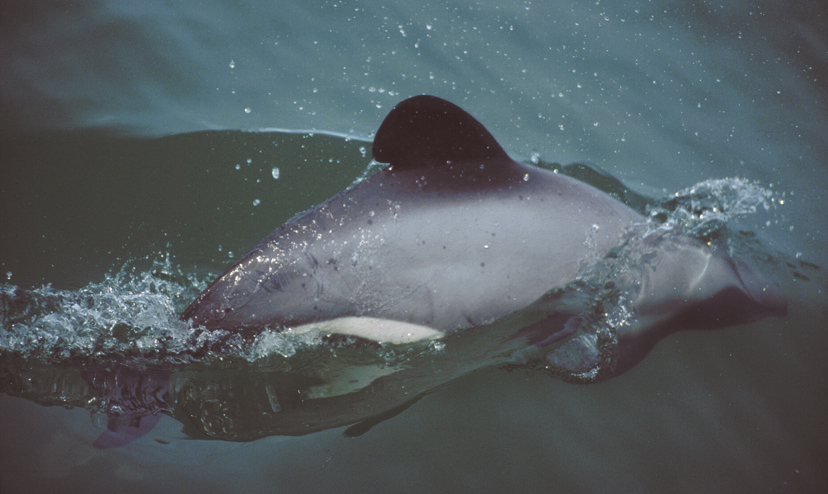 Found only in New Zea­land waters, Hector’s and Maui’s dolphins are the small­est of the world’s 32 dolphin species, reaching an average length of just 1.4 m. Black, white and grey in colour, they are easily recognised by their unique, rounded dorsal fin, often compared to a “Mickey Mouse ear”.

Before 2002, the North Island dolphins were thought to be identi­cal to those in the south, and all were named Hector’s. However, when genetic profiles showed the northern population to be a distinct subspecies that didn’t breed with the southern, it was given its own name, from the Maori name for the North Island, Te Ika a Maui.

Once common as far south as Taranaki, Maui’s dolphins are now found only along a limited stretch of the north-west coast. Hectors are scattered throughout South Island waters, with the largest numbers along the West Coast and around Banks Peninsula. They feed on small fish and squid in shallow waters close to shore, where they are susceptible to entanglement in fishing nets, boat strikes and pollu­tion. Between 1984 and 1988, more than 230 dolphins were killed in nets around the Canterbury coastline.

This prompted the government to establish, in 1988, New Zealand’s first marine mammal sanctuary—an area around Banks Peninsula of 1140 sq km where commercial set nets are banned and recreational net­ting restricted. To protect the Maui’s dolphin, in 2003 the government banned set netting in the Manukau Harbour entrance and in an area extending four nautical miles off the coast between Maunganui Bluff and Pariokariwa Point in north Taranaki.

Both Hectors and Mauis are slow breeders. Females don’t reach sexual maturity until they are between seven and nine years old. Then they produce just one calf every two to four years. One female might give birth to only four calves in her 20­ year lifetime.

The Worldwide Fund for Nature predicts that Maui’s dolphin num­bers could decline by as much as 75 per cent within 15–20 years if current trends continue.

In order to give Maui’s dolphins better protection, Rob McCallum, Auckland conservator for DoC, says he needs more precise informa­tion on their whereabouts. “From a management perspective,” he says, “I don’t care how many there are. I know they’re in trouble. What I want to know is where they are. Are they in areas where they are exposed to nets? Is the protection area large enough?”

Several methods are being used already to find out more about Maui’s dolphins—boat surveys, aerial surveys, public sightings and genetic sampling—but these take a long time to compile data. Which is why DoC decided to look at the pos­sibility of tracking tagged dolphins by satellite to learn more about their movements.

In March 2004, a trial was un­dertaken using the more plentiful and longer-studied Banks Peninsula Hector’s dolphins as subjects. It was led by Dr Greg Stone, from the New England Aquarium in Boston, and involved specialists from the Natural Environmental Research Institute in Denmark, Massey and Auckland Universities, DoC and Wellington Zoo. It was the first time in New Zealand that dolphins had been monitored using satellite telemetry, although the technology has been used here on sea lions for several years, and on marine mammals in other parts of the world for decades.

Three dolphins—two females and one male—were captured and fitted with Argos satellite transmitters in early March. Each custom-made device, weighing 50 g and about the size of two matchboxes, was attached to the dorsal fin with two medical nylon pins. These were held in place by metal fasteners designed to break down in sea water and thus release the tag after about three months.

Transmission signals were monitored for several months, and revealed that each dolphin had its own preferred areas around the peninsula. Stone says this was surprising and may indicate divisions within the population. The dolphins spent about 10 per cent of their time outside the sanctuary, occasionally travelling distances of up to 60 km in a day, such as swimming up to the mouth of the Waimakariri River and back to Banks Peninsula. “The dis­tance travelled between points was within what we knew, but we never expected them to do it so quickly,” Stone says. The dolphins covered in a week distances that previously they were thought to travel in a lifetime. Though the purpose of the study was to determine if satellite tagging could be employed without harming the dolphins, Alistair Hut of DoC Akaroa says such data was a bonus. “You could extrapolate so much from it. You could overlay it with a whole lot of other information like ocean temperature and depth charts.”

The tagged dolphins seemed to suffer no harm in the trial. During tagging, each animal was held for just under 30 minutes while Dr Pa­draig Duignan, director of the New Zealand Wildlife Health Centre at Massey University, monitored heart rate and respiration and checked plasma cortisol levels, which provide an indication of stress. Heart rates were steady and cortisol levels low, suggesting the dolphins weren’t part­icularly stressed by their capture and that the procedures used were safe.

For Duignan, who has autopsied more than 80 Hector’s and Maui’s dolphins in the last eight years, the tagging trial presented the first op­portunity to assess the health of a live dolphin in New Zealand. The in­formation he was able to gather from blood and mucus samples are valu­able additions to the limited bank of information about the dolphins.

“Until now, we had no profiles on the record for these species,” he says. “If we ever have sick animals, we’ll now have some baseline data from healthy dolphins to compare.”

The health check on the three dolphins revealed that Pauri, the old­er of the females, was infected with Brucella, a bacterium that can cause abortion and sterility. “We didn’t even know we had Brucella in New Zealand dolphins,” Duignan says. Since the discovery, the bacterium has been found in one of five other samples tested. It has already been identified in dolphins elsewhere, and also infects seals, cattle and other land animals. As regards Mauis and Hectors in particular, it could be a factor in population decline.

Duignan fears that it may already be too late for Maui’s dolphins. “I think it’s pretty gloomy for them. It’s not like with kakapo, we can’t catch them all and put them in some fenced-off lagoon and have them reproduce in a fully protected situa­tion. We need to know what habitat they need to survive and protect that.”

Everyone agrees that to protect these dolphins more information is critical, but scientists and conserva­tionists squabble about the best way of gathering it. Some were opposed to the tagging trial on the grounds that the risks of an invasive study were not worth the information that would be gathered.

“With any method that’s invasive there is a risk,” concedes McCal­lum. “The strengths are that [satellite tagging] produced a huge amount of information in a short time and it’s the only tool that tells you where an individual is 24 hours a day. Other methods collect information over a long period of time, and I’m not convinced that Mauis have that long. We are not going to wring our hands on the beach every time one comes in from a gill net. We’re going to do everything we can to protect them.”

The final report on the tagging trial is expected by the middle of the year, and McCallum will then decide if satellite telemetry goes ahead for the Mauis. Either way, he says, other methods of gaining informa­tion about the dolphins will still be important.

“These guys are on the edge of extinction. We need to use everything. And New Zealand has a very strong history of using innovative methods to bring species back from the brink of extinction. Unfortunately it’s something we have quite a lot of experience of.”