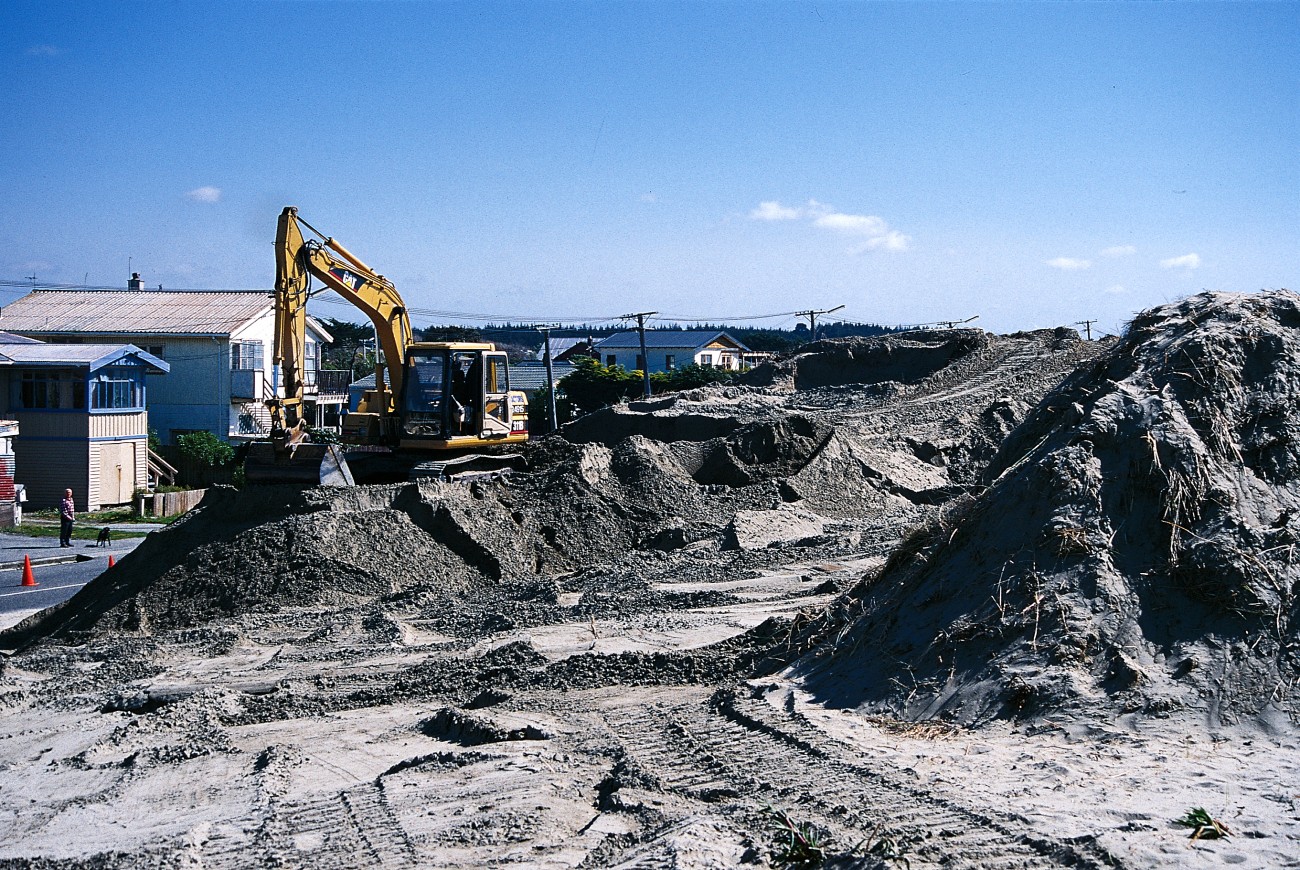 Although beaches generally withstand whatever onslaughts the ocean may hurl at them, once humans start to meddle, trouble often results. Coastal geomorphologists usually throw their hands up in horror at suggestions of interfering with beach dunes.

However, at Brighton Beach, in Christchurch, Coast Care, a branch of the city council, has recently removed 8000 cu m of sand from the rear slope of a sand dune as part of a dune recontouring project. How has this tampering been justified?

Dunes play a pivotal role on coasts. They act as sinks for large volumes of sand. In calm conditions, they are built up as sand is moved up the beach by wind. During storms, coastal dunes then act as buffers, supplying sand to counteract the energy of the waves. This sand is moved by storm waves into offshore bars, ready to be returned to the beach system. Large, well vege­tated foredunes are by far the cheapest and best protection available against severe waves.

The height of a dune system directly determines its ability to act as a buffer. During a storm, waves will devour a certain volume of sand per hour. A low dune will supply sand at the same rate as a high dune, but it will be eaten away horizon­tally at a much faster rate by storm waves. It follows that the higher a dune system, the greater the protection for property and people.

At Brighton, residential property sits on the backshore for most of the length of the beach. High foredunes are the only line of defence against storm and tsunami damage and the threat of sea level rise. It seems ironic, then, that residents have been lobbying for years to get the dunes reduced in height, if not eradicated altogether.

Early grazing and burning caused the loss of pingao, a native sand-binding species that covered the original dunes. By the turn of the century there was no foredune at all, allowing the free incursion of sand inland. This was accompa­nied by salt-water inunda­tion of farmland during storms.

Manuka fences were erected along the shore, which proved perhaps too effective in their sand-trapping capabilities. In one instance a 1.5 m fence was buried in a single day. Marram grass, a very effective sand binder, was also introduced, and it encouraged steeper, higher dunes than the original pingao-covered dunes.

Since 1940, the foredune system at Brighton has gained an average of 49,000 cu m of sand each year. The development of housing on the backshore has confined dune growth but caused considerable frustration to residents. The dunes have grown high and unstable. Sea views have been lost and there are ongoing problems with sand being blown into houses and gardens. Furthermore, the growth of the dunes has actually caused a decline in recreational use of the beach, as it has become less accessible.

Coast Care has the task of balancing the drive of beach processes with the interests of recreationalists and residential property owners. In 1995, a resource consent allowed dune lowering to 8 m above mean sea level, on the condition that all sand was returned to the beach system. Since Brighton Beach is growing at approxi­mately half a metre per year—the Waimakariri River alone feeds 200,000 cu m of sand into Pegasus Bay each year—the area has an abundance of sand. Because of this, a one-off consent was recently issued for the removal of sand from a section of the dunes.

During recontouring, dune profiles are altered so that the front slopes are steepened and the back slopes made flatter than on the natural dune. Such a shape slows the wind as it hits the front slope, so that most of the sand is depos­ited before the wind flows over the crest. With steep back slopes, sand accumu­lates in the lee of the dunes, causing them to encroach over the road.

The dunes are also straightened on their seaward side to prevent wind scouring. Fences along the front of the dunes help repair blow-outs, which occur when wind scours between the dunes.

Once the profile is estab­lished, the dunes are planted with iceplant, a non­native sand-binding species which quickly provides good stability, but is easy to remove if additional work needs to be carried out. In many areas, iceplant is now being successfully replaced by native pingad and spinifex. About 30 species of native plants have been found to thrive on the back slopes of the dunes, where they are partially protected from wind scour and salt water.

Some residents would like to see dunes lowered to 5 m. But they may not thank the council if a large storm then overtopped the dunes and devastated property. Even 8 m dunes would be reduced in volume by 90 per cent in a 100-year storm. That isn’t an excessive safety margin given the unpredictability of our weather.