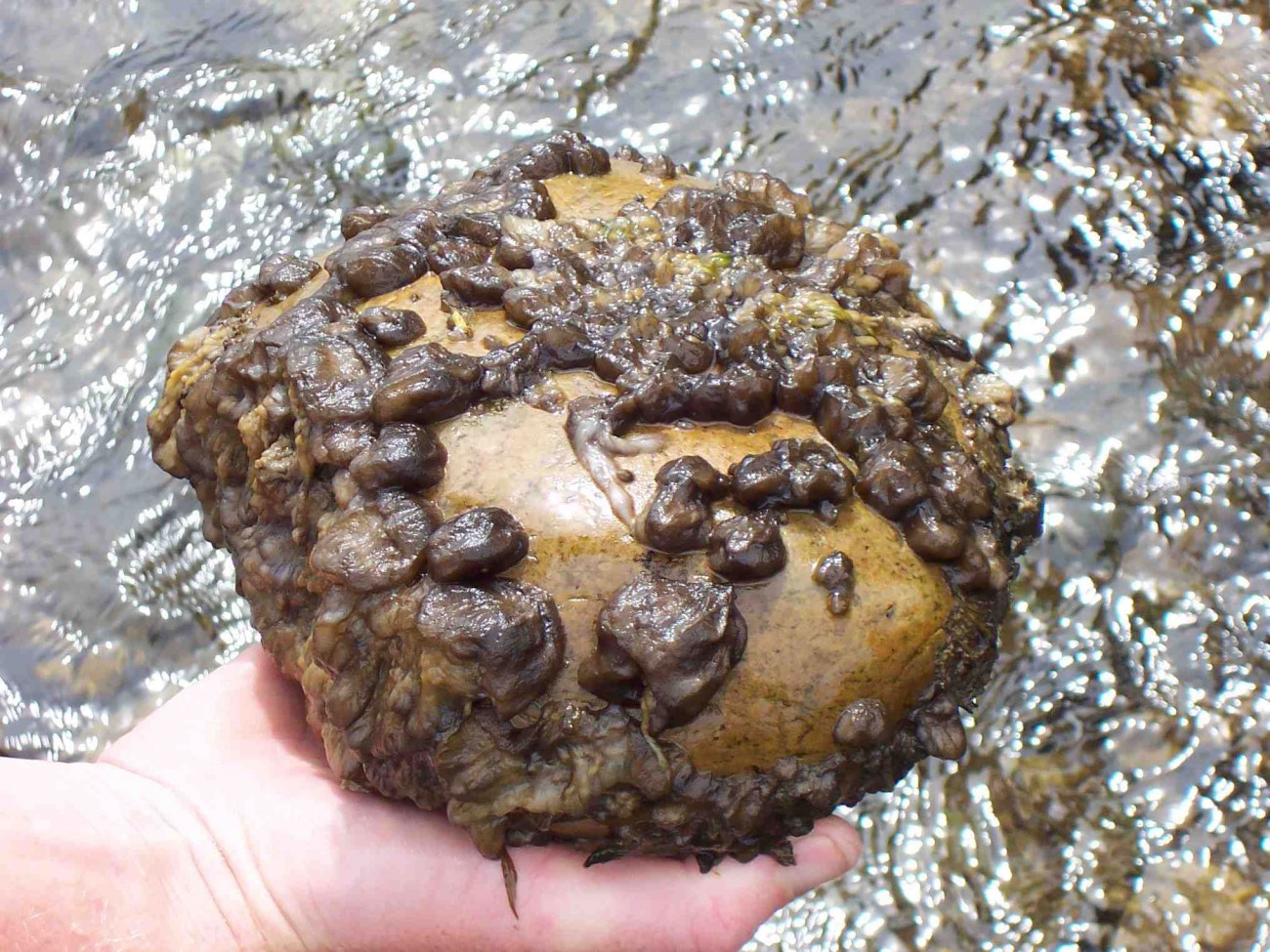 October 15, 2004, was a black-letter day for New Zealand’s biosecurity. During a routine survey of the Waiau River where it runs through Jericho Valley, south of Lake Manapouri, staff of the National Institute of Water and Atmospheric Research (NIWA) and Southland Fish & Game had an unpleasant surprise: they found a thick, dirty-brown mat-like growth tens of metres in length which covered the riverbed from the shallows out to a depth of half a metre.

A sample was taken and was iden­tified a few days later by NIWA alga specialist Cathy Kilroy as the diatom Didymosphenia geminata, a type of single-celled alga. Its appearance in a New Zealand river raised immedi­ate concern because it was the first time this organism had been found in the Southern Hemisphere, and, more importantly, because it was known to have caused problems in water­ways overseas. That an exotic species capable of forming dense, smothering mats had taken up residence in one of Southland’s popular angling rivers also represented a significant breach of the country’s biological borders.

“Didymo” (as the organism has come to be called) is a native of cool temperate rivers in northern regions of Europe, Asia and America. In the past two decades it has expanded its range and become a more dominant component of river flora. Blooms have been reported from Iceland to Ireland, Romania to Montana. On Vancouver Island, British Columbia, two-thirds of the waterways have been affected. It is unclear what fac­tors are responsible for this increase in activity.

Didymo cells are roughly a tenth of a millimetre in length—large for adiatom—and spindle-shaped with a swelling at each end, aptly described as resembling a jelly baby. Like all diatoms, didymo has a silica cell wall comprising a pair of valves that fit together like the two halves of an old-fashioned pillbox. (The word “diatom” means “cut in two.”) The silicate capsule is riddled with holes, including, in didymo’s case, special pores through which the cell exudes a mucilaginous polysaccharide stalk. While many diatoms produce muci­lage, what is unusual about didymo is the length and thickness of the stalk, which enable the organism to secure itself firmly to virtually any substrate, from river stones to other plants. Thus anchored, didymo can persist in a river for long periods and form tangled mats that remain intact even after the cells themselves have died.

Diatoms have a “bloom and bust” life cy­cle, reaching huge num­bers when conditions are favourable (typically in spring) and ticking over at lower population lev­els during the rest of the year. Their numbers are able to build up rapidly through asexual repro­duction, during which the organism basically splits in half. Each daugh­ter cell keeps one of the silica valves and grows a matching one that fits inside it. Many diatoms are capable of dividing once a day, so it does not take long for the popula­tion to explode.

A curious aspect of di­atom reproduction is that each asexual division results in two slightly smaller offspring, since each new valve must fit within the rim of its par­ent. This “Russian doll” effect obviously can’t continue indefinitely, and to overcome the problem the organisms use sexual reproduction to regain their original size.

Though they rarely come to our attention, diatoms are a major component of the Earth’s flora. Tens of thousands of species are known. They are a food source for creatures as small as protozoans and as large as whales, and are re­sponsible for almost half of the primary produc­tion of the sea. To give just one New Zealand example: surf diatoms—recognisable as the brown scum that washes ashore on west-coast beaches—are a major food source for such popular edible shellfish as tuatua and toheroa.

Diatoms provide other, less intuitive, ben­efits. A good percentage of the oxygen we breathe is produced by diatom photosynthesis, and the world’s crude oil de­posits are, in large part, diatom graveyards which have undergone chemi­cal change. Diatoma­ceous earth—the highly absorbent chalky remains of fossilised diatoms—is used in swimming-pool filters and cat litter, and even as an organic slug killer (the jagged-edged silica lacerates the mol­lusc’s skin, causing the animal to dehydrate).

Offsetting such ben­efits, however, are some less benign qualities. Like their algal cousins the dinoflagellates, some diatoms produce toxins, which, during blooms, can reach dangerous lev­els. In 1998, several hun­dred Californian sealions died after eating ancho­vies that in turn had been feeding on a diatom called Pseudonitzschia. This little nasty produces domoic acid, which, if ingested in quantity by humans, can cause am­nesic shellfish poisoning (ASP), so named because one of its symptoms is permanent short-term memory loss. ASP’s hu­man impacts range all the way from vomiting and diarrhea to halluci‑nations, seizures and death.

Though less common in New Zealand than other forms of shell­fish poisoning (typically associated with dinoflagellate blooms) ASP is a potential health risk, and domoic acid levels are routinely monitored in mus­sels and scallops.

Didymo itself has no known im­pacts on human health, apart from irritation to the eyes of swimmers in waters where diatom concentra­tions are high. The aesthetic impact, though, is considerable. Whoever bestowed on didymo the description “rock snot” captured the sense of disgust felt by river users who con­front a bloom of this mucilaginous micro-organism. A didymo mat has been compared to a rotting sheep­skin, and its large-scale presence to a sewerage outfall.

Didymo’s potential ecological impact on New Zealand waterways has yet to be determined, but over­seas experiences of didymo blooms suggest that the country’s anglers, kayakers and other river users are right to be worried about what could happen here. In a comprehensive report on the organism published in 2004, Cathy Kilroy noted that in one catchment in the western United States a 90 per cent decline in trout fisheries was associated with didymo outbreaks in 2003/2004. A Colorado researcher reported that in some streams “every available substrate” had become covered with thick (3-5 cm) didymo mats. “As the cells die, the stalks persist over weeks or even months. Fine sediment becomes trapped in the mucilaginous stalks, then other diatoms colonise and seem to stabilise the ‘leftover’ stalks. The whole mess seems to be resistant to grazers, and the usual invertebrates are not reported from those sites.”

Could such a fate be in store for New Zealand rivers? Cathy Kilroy be­lieves didymo’s impact is “likely to be similar and could be significant.” The main ecological effects she predicts from didymo blooms are localised reductions in dissolved oxygen levels, a shift in invertebrate fauna from species favoured by fish (cad­disflies, mayflies, stoneflies, etc) to less palatable species (snails, midges and worms) and a loss of biodiversity through the smothering effects of the didymo mat.

The diatom’s apparent preference for clear, low-nutrient water means that many of the country’s most picturesque rivers may be most at risk—and there is no known method of containing or controlling the or­ganism. If not spread by careless an­glers, kayakers or trampers, it could move from one waterway to another in the feathers of ducks, the fur of deer or courtesy of any number of other animals. There are indications that if kept in cool, moist conditions didymo may be able to survive for several weeks out of water. On the other hand, the cells die quickly if temperatures rise above 18° C.

While acknowledging the serious­ness of the didymo threat, the New Zealand Professional Fishing Guides Association (NZPFGA) whose members stand to lose considerable revenue if New Zealand’s reputation as an angling El Dorado suffers, has adopted a “let’s not panic” stance. It points out that despite extensive sampling over recent weeks didymo has been confirmed in only six rivers (Waiau, Mararoa, Clutha, Buller, Oreti and Hawea)—”a tiny percent­age of the rivers that are fished and guided upon”—and that scientists know very little about the environ­mental conditions in which didymo thrives, how it is dispersed and what triggers its blooms. “The worst-case scenario is not here and may not arrive,” wrote NZPFGA biosecurity spokesman Nigel Birt in a recent bul­letin to fishing guides.

Research on didymo has been hampered by an inability to keep the organism alive in the laboratory. Once that hurdle has been over­come, work on profiling didymo’s physiological preferences—its pre­ferred light regime, flow rates, water chemistry, etc—will begin in earnest. By understanding the enemy, it may be possible to limit its advance.