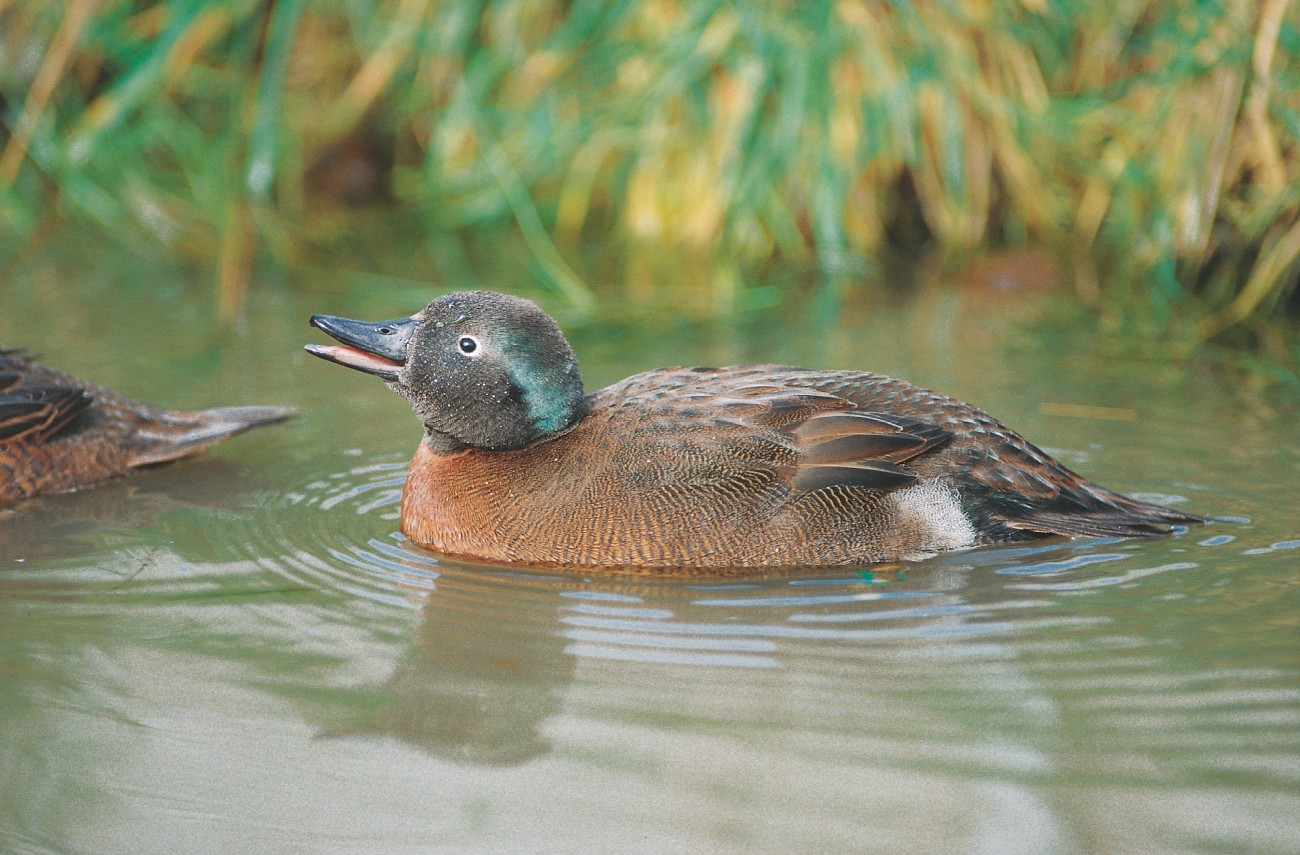 Less than two kilo­metres off the west coast of Campbell Island, a 23-hectare rocky islet rises out of the Southern Ocean. Lashed by strong winds and cold rain for most of the year, and typically obscured by cloud, 200 m-high Dent Island is anything but a hospitable environment. Those steep slopes that do not bear the scars of recent erosion are blanketed by tussock grass. There are no trees on this bleak, tooth-shaped rock, and there is little standing water.

It is not your average waterfowl habitat, yet Dent Island happens to be the last refuge of the critically endangered flightless Campbell Island teal.

About half the weight of a mallard, the teal is primarily a nocturnal bird, with activity peaking at dusk. It is thought that the birds forage amongst decaying seaweed for sandhoppers and other invertebrates.

The males have a richly coloured plumage: the head feathers shine with a blue-green iridescence, the breast is chestnut, and finely vermiculated flank feathers lead to a white patch at the base of the tail. Females and juveniles are less flamboy­antly attired, in shades of sepia-brown.

The flightless characteris­tic of the Campbell Island teal is shared by three other extant species of duck. The slightly larger Auckland Island teal occupies a similar ecological niche in the Auckland Islands group, and two species of steamer duck, with extensively reduced wings, are found on subantarctic islands in the Magellanic region of South America and on the Falkland  Islands (see “Flightless Birds,” the poster in New Zealand Geographic, Issue 37).

As with flightless birds everywhere, these species are extremely vulnerable to introduced predators—and such is the case on Campbell Island. Albatrosses and penguins, breeding in vast colonies, appear to have coped with the intruders, but smaller burrow-nesting seabirds have struggled, and terrestrial species have stood little chance against the depredations of Norway rats and cats, brought to the island first by sealers and whalers, then by farmers.

The teal, a rare snipe, shearwaters, petrels, a distinct race of pipit, a weevil and even a flightless moth have survived only on outlying islets which escaped invasion.

The total Campbell Island teal population probably numbers fewer than 25 pairs, and, until recently, Dent Island was the only place they could be found.

The Department of Conservation is trying to ensure this severely threat­ened species does not follow the same path to extinction trodden by so many other native birds over the past thousand years, and to this end has instigated a teal recovery programme.

The long-term goal is to restore the species to the whole of Campbell Island, but since the Dent Island population is too fragile to use as a source of birds for translocation, the recovery of the species is dependent on a captive-breeding programme and the successful reintro­duction of captive-bred birds into the wild.

The first such release occurred in April 1999. Twelve birds were liberated on Codfish Island, a wildlife sanctuary west of Stewart Island, to seed a new wild population. An additional 32 birds are being held in captivity at the Mt Bruce National Wildlife Centre as insurance, should the Dent Island population suffer some unforeseen disaster.

The Codfish birds will have the opportunity to develop relevant survival skills in an environment of natural hazards and hard­ships—skills that will be essential if they are to return to the subantarctic.

The ecological require­ments of the Campbell Island teal seem to be similar to those of the Auckland Island teal: freshwater habitat with access to shorelines.

As well as foraging for crustaceans amongst the piles of kelp that litter the shore, the teal may also associate with burrowing seabird colonies, where insects thrive on the vast quantities of guano. Dent Island is honeycombed with burrows of the white-chinned petrel, also a refugee from main Campbell Island. Codfish Island’s burrowing nesters include sooty shearwaters, mottled, Cook’s and South Georgian diving petrels and blue penguins. It remains to be seen whether the captive-bred teal find these colonies and tap into their associated food source.

It has taken 15 years from the first capture of Campbell Island teal to reach the point of establishing a second wild population. Apart from the problem of finding the reclusive birds on their inhospitable island, the main challenge has been getting  them to breed.

In 1990, the captive population consisted of seven males and four females. While some of the males proved fertile (they readily paired with females of the Auckland Island teal), the females showed no inclination to engage in any form of nesting activity.

The breakthrough came in 1994 when three pairs were flocked in one large aviary and closely monitored for social interactions. (A breeding pair must be separated from other birds, as these highly territorial ducks can fight to the death in a confined territory.) That season, a female finally accepted a mate, constructed a well hidden nest and laid three fertile, buff-coloured eggs, the first Campbell Island teal eggs ever seen.

The breeding programme was under way at last. The next step was to pair the other wild-caught birds with captive-bred one-year-olds, to ensure an adequate genetic diversity in the population. This second step has been successful, and now six of the original wild-caught birds are genetically represented in the captive and Codfish Island populations.

Each of the teal on Codfish Island wears a radio transmitter. By monitoring the birds’ movements, researchers will be able to assess the survival of differ­ent age classes and record habitat use.

On moonlit evenings, the teal have already been observed exploring the sedge-covered dunes, investigating rocky platforms and tidal zones. At dawn, evidence of their night-time excursions across the beach can be traced in their footprints in the sand—unusually large for such a small, non-diving duck. Birds have climbed steep rock faces, found refuge beneath large piles of driftwood, entered neglected seabird burrows and, most impressively, ventured out to the sea. They are certain to have encountered their first yellow-eyed penguins, as well as a New Zealand sealion attending her pup at Sealers Bay.

Adventurous teal, heading upstream, may even find themselves bill to beak with a large, nocturnal, moss-green parrot, for Codfish Island is also kakapo country.

The transmitters should enable field staff to locate any nests, but no one is too hopeful at present: it will probably take several releases to establish a self-sustaining population.

But optimism is the fuel of any conservation pro­gramme, and it has to be for this one. The ecological restoration of 11,268 ha Campbell Island requires the complete eradication of all remaining mammalian predators. (The last of the sheep and cattle were removed earlier this decade, and cats have apparently died out; only those rogue rats remain.)

DoC believes it has the technology to make the island predator-free, but it will take time to implement such an enormous, and costly, project.

Surely, though, one day next century conservation­ists will be able to move this smart, hardy little duck back to its former home. Those involved in the project can hardly wait!