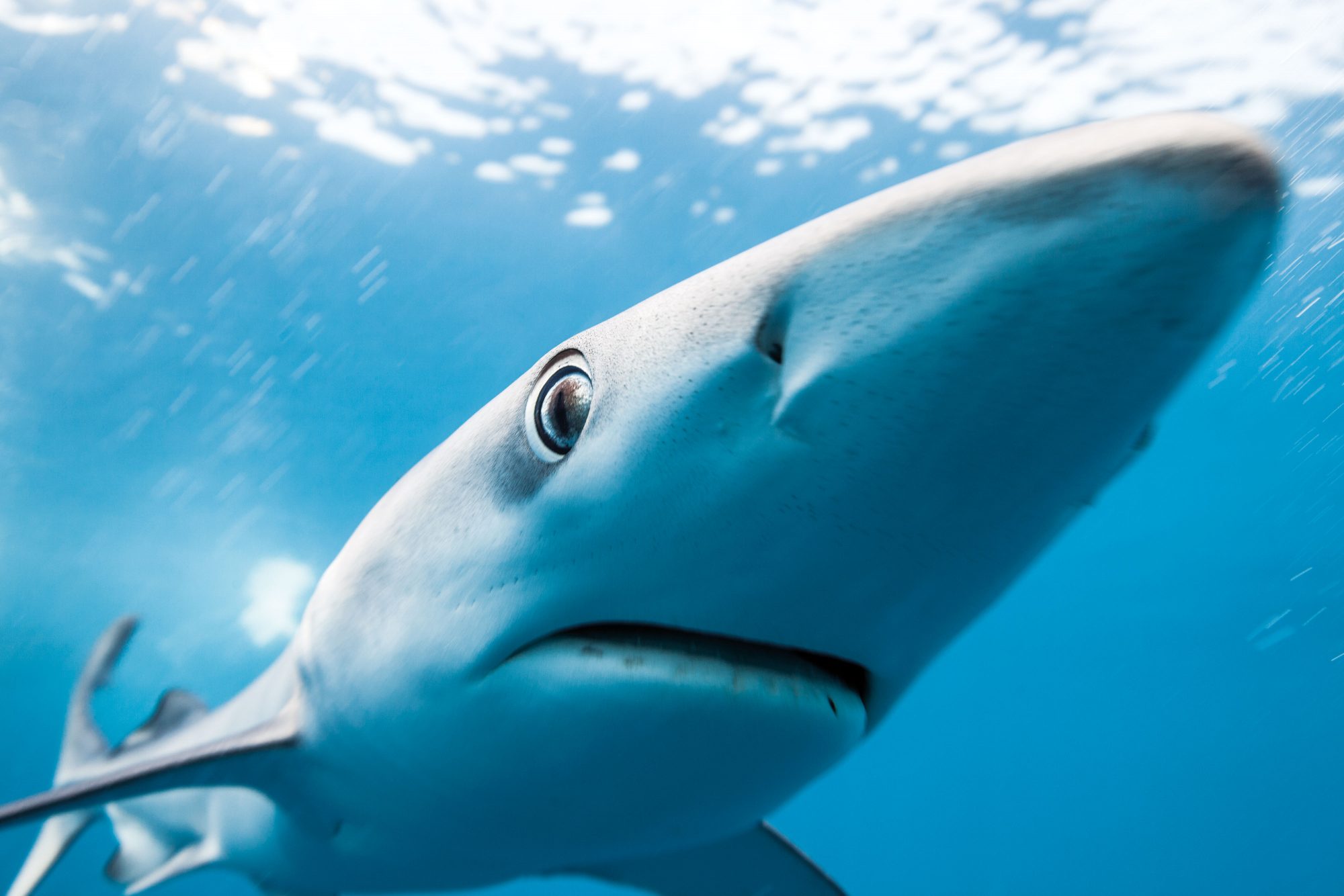 U.S. Navy specialists conducting antisubmarine warfare during World War II puzzled over mysterious readings on their sonars that seemed to indicate a depth of 300 metres, where they knew it to be 3000 metres deep. Unusually, this Deep Scattering Layer, as it became known, seemed to be deeper during the day than it was at night. Later measurements, completed over the course of the war and declassified after it ended, confirmed that sonar operators were not looking at the seafloor at all, but an aggregation of living organisms so dense it could be mistaken for the bottom of the sea. They had recorded the world’s largest migration, which occurs in all the oceans of the world, every night of the year.

Scientists now refer to the phenomenon as diel vertical migration, the mass movement of creatures from the cold waters of the mesope­lagic zone—between 200 and 1000 metres below the surface—into the warmer epipelagic zone, where light penetrates. Plankton moves upward at night to feed under the cover of darkness, and organisms that feed on plankton, such as squid, move to shallower water too, taking advantage of warmer water to drive the higher metabolism required for feeding, before sinking into the cool depths again during the day to conserve energy.

This great ballet in the dark also dictates the daily routines of the ocean’s largest predators. Blue sharks feed mainly on squid, which are most accessible when they have ascended into shallower water at night. There the sharks feed in the dark, using only their acute sense of electro­reception, virtually mapping the position of their prey even in complete darkness.

Being cold-blooded, blue sharks lack any mechanism to regulate their body temper­ature.

So after feeding at depth, they must rise to the surface to digest their food in the warm water that affords a higher metabolic rate, and faster digestion.

That done, they descend to the cool depths once more—to chill out, as it were, and conserve precious energy for the next nocturnal hunt.

It’s a daily commute, up and down through the water column, from cold water to warm water and back to depth again, synchronised with the rhythms of their prey and the metabolic requirements of their own bodies.

Blue sharks have been shaped by this ritual. Unlike the heavily-set attack preda­tors such as great white sharks, equipped with frightening dentition, blue sharks are the lithe endurance athletes of the aquatic realm—sinuous, efficient cruisers. Their bodies are narrow, with huge pectoral fins extending like wings from their flanks. Their teeth are small, since most of their prey is of a size that is swallowed whole, rather than torn to shreds.

But it’s the electrosensory acuity of the blue shark that allows it to find prey 200 metres beneath the surface, even in the dead of night. All living things, including humans, broadcast subtle electromagnetic fields, and sharks are more sensitive to these fields than any other animal. They detect them using special sensory organs called the ampullae of Lorenzini—jelly-filled canals opening to dark pores on the shark’s snout, quite visible in photographs. They’re sensitive enough to detect five billionths of a volt, to find small fish even when buried under the sand, and to follow the Earth’s magnetic field as if it were a map.

But while scientists may be able to describe a blue shark in some detail, it’s harder to describe blue sharks in general. They don’t know how many there are, or where they are, and little is understood of their patterns of breeding.

Which is not to say that New Zealand­ers don’t encounter them often. Every time a surface longliner sets its hooks, or a purse-seiner drags its net, blue sharks are almost certainly among the target fish hauled aboard. Some 20,000 blue sharks were caught in New Zealand waters in the 2011–12 year as by-catch in the tuna fishery. Sharks typically make up one-third of the catch, and blue sharks top the list of those caught. More than 99 per cent of blue sharks are finned before being dumped at sea, a practice now out-lawed in 98 coun­tries, though New Zealand still allows it so long as the sharks are killed first.

Fins fetch in the region of $30 per kilo­gram for fishermen in New Zealand, but retail for around $1000 per kilogram in China, where they are the central ingredi­ent in shark fin soup.

Like any New Zealand species caught in substantial numbers, the catch is limited by a quota. Typically this is estimated as the sustainable take from a known stock, but species that are ‘data deficient’, such as the blue shark, must be managed against historic catch sizes, a relative measurement called Catch per Unit Effort. If the catch goes down dramatically, fishery officers can infer that the take is above what is sus­tainable. But it is an imperfect system built on imperfect data.

To date, the effect of this catch on the population of blue sharks is unclear, though the declining Catch per Unit Effort for the species in the North Pacific—down more than 50 per cent in a decade—has also been noticed in catch rates in the South Pacific since 2009.

Shark researcher Riley Elliott, who is conducting PhD research at the University of Auckland on New Zealand’s blue shark population, is more adamant. “Blue sharks can’t be quota-managed because we don’t know anything about them,” he says. “It’s like pulling numbers out of the air.

“The South Pacific is the very last ocean with a healthy population of highly migra­tory sharks. But the last of the world’s tuna stocks are here, too.”

Scientists and fishery officers are reviewing New Zealand’s National Plan of Action on Sharks, which currently protects only great white and basking sharks. While environmentalists call for a total ban on shark finning, some scientists believe that a requirement to land the whole shark would be sufficient to put an end to the finning practice—the space taken in the ship’s hold outweighs the income from the small percentage of the shark that is used. It would be good news for sharks, as more than 90 per cent caught on longlines are brought to the boat alive, says Elliott, and some 70 per cent would survive if released immediately.

Elliott is attempting to create a predic­tive model that will map the distribution, abundance and movement of blue sharks in New Zealand waters and identify criti­cal habitats. He hopes the results will enable fisheries to reduce by-catch, espe­cially in critical areas, and protect sharks in New Zealand.

Five kilometres out from Coromandel’s Hot Water Beach, Elliott spoons turbid fish oil into the sea. He’s been here for hours, setting a long slick of chum like a shimmer­ing wake behind the rolling boat.

He’s interested to know where they go, how they interact with fisheries, how they behave when at sea and what proportion of the New Zealand blue shark population moves in and out of our exclusive economic zone each year. To do that, he’s going to track them from space.

A slow-moving fin appears, zigzagging towards a bait lashed to the stern. The shark makes two timid passes before grasp­ing the bait, a barbless circle hook setting in the corner of its jaw. Its eyes roll back as it thrashes against the wire trace, and Elliott guides it into a PVC sling.

Elliott targets the largest specimens, which have dorsal fins big enough to attach the palm-sized GPS transmitter. It will record the shark’s depth, location and water temperature for up to three years, the limit of the battery life, and beam the data to a satellite whenever the shark is at the surface.

So far, Elliott has tagged eight blue sharks. The plots of their journeys trace sharp lines across Google Earth, literally joining the dots that mark each of the tags’ successful uploads. The reason for the mul­tiple course changes is unknown, but con­firms what is already known of the species—they are roamers, ocean vagrants, as comfortable at sea as we might be walking the streets. Two of Elliott’s charges have remained relatively close to the New Zealand coast, two have tiki-toured around North Cape and into the Tasman, and two have headed for the tropics, into the deep Fiji Basin, one following the Colville Ridge past the Kermadecs.

The data coming from the tagged sharks also confirms the feeding behaviour of blues. They dive to the thermocline at night and digest on the surface during the day.

Elliott hopes that, in time, his sharks will reveal greater truths about the species that have eluded researchers until now. The tags should continue to transmit for long enough to reveal the animals’ breeding sites and the pattern of their annual migra­tion, shedding light on the origin and des­tination of sharks that move through New Zealand waters.

Ultimately, this small cohort will be used as an index for the entire population. Their movements will be overlaid on the catch data from some 100,000 blue sharks caught in New Zealand and recorded by fisheries observers, and married to data­bases of sea surface temperature, chloro­phyll density and bathymetry. An algorithm will be run across the data to search for patterns between the known location of catches, the movements of Elliott’s sharks and environmental factors, to guide researchers and fisheries scientists alike.

This information could also prove pivotal for ocean conservation. As apex predators, blue sharks keep the population of lower levels of the food chain in check, and contribute to the rain of organic debris that falls through the water column to the bottom-dwelling creatures far below. The removal of top-level predators from an eco­system invariably leads to a cascading series of consequences known as trophic collapse, which can affect other fisheries in surprising ways. In the North Atlantic, scallop catches have all but disappeared due to an abundance of rays that were once kept in check by sharks.

It’s obvious in New Zealand, too. Elliott guides tours on the glass-bottomed boat operating out of Whitianga on the Coro­mandel Peninsula. Inside the Te Whan­ganui-A-Hei Marine Reserve is an abundance of marine life. But in unpro­tected waters outside the reserve bound­ary, legions of kina gnaw away on the rocky reefs, grazing algae down to a stubble.

“It’s a good demonstration of trophic cascade, how removing a predator at the top of the food chain affects the balance of life beneath it,” Elliott says.

How blue sharks contribute to the ocean ecosystem will become considerably clearer as Elliott’s transmitters continue to eavesdrop on the secret life of his sub­jects. The eight tagged sharks are exem­plars of their entire species, their every move scrutinised for what it may imply in terms of life cycle, distribution and popu­lation, for our information, and their very survival.

Satellite tags eavesdrop on the location of eight blue sharks, beaming a packet of data—which includes depth and water temperature with longitude and latitude—to a satellite every time the shark surfaces, creating points between which one can infer the shark’s course. The depth profile for a single 24-hour period (below) reveals the daily commute—feeding at 300 metres at nightfall until full, returning to the surface to digest, back to feed at depth, then returning to the shallow water during the day, hunting only opportunistically until dusk. Analysis of depth data reveals that the shark ‘Riley’ dived to a depth greater than 1200 metres on three occasions in the first two weeks of the study, breaking the deepest record for the species. Elliott hopes that over the three-year lifetime of the transmitters data will further enhance our understanding, reveal their breeding grounds and how and when they move in and out of New Zealand waters.