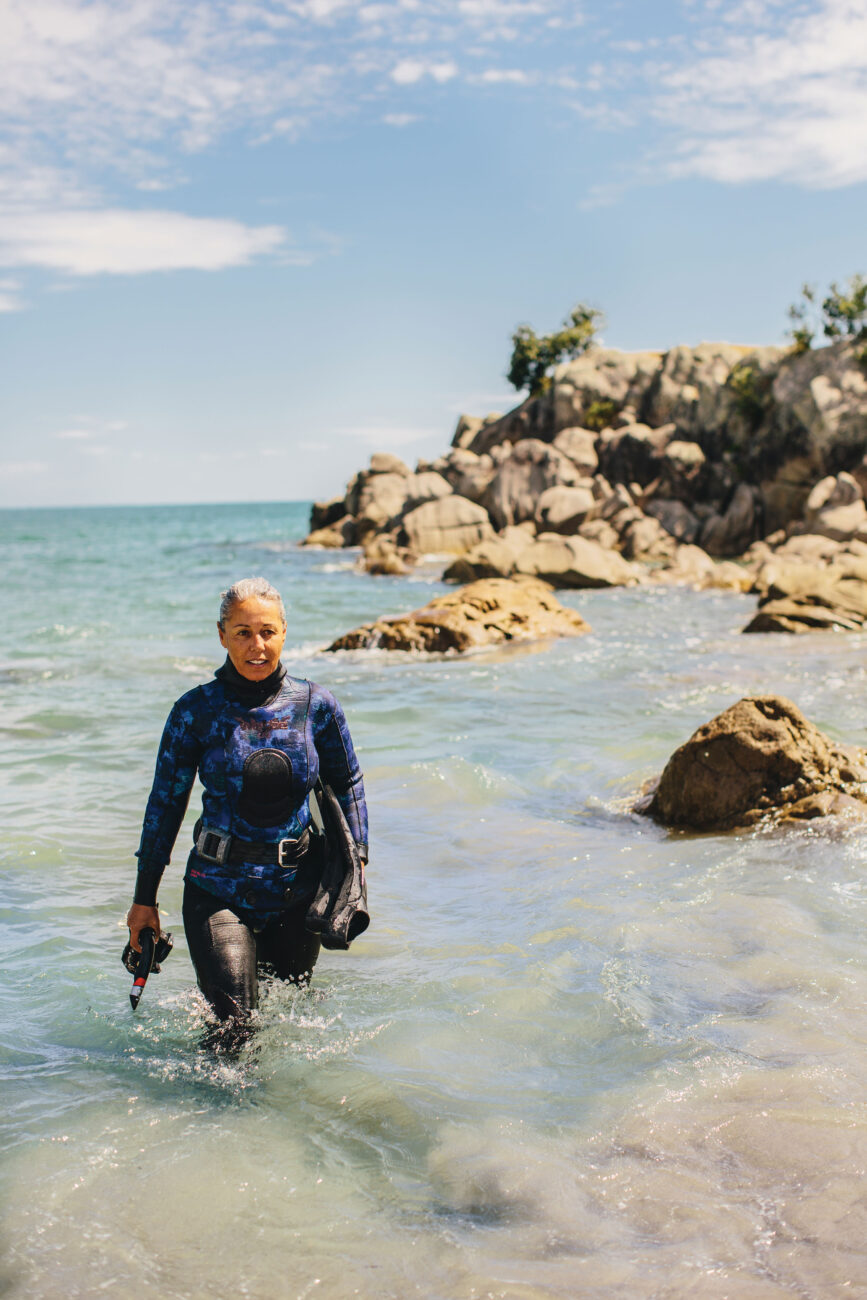 I’m Ngāti Awa and Ngāti Whakehemo but I grew up in Kawerau in the 70s, which was a thriving place back in those days. We grew up in a street called Domett Street and as kids, we used to call it Sunset Boulevard. I guess we watched American TV and it made us feel like that our street was a fancy street, but at one stage, I remember, we had no furniture. My mother’s Irish, but her father disowned her when she married my dad because he’s Māori.

I never went to the moana because we lived in Kawerau, which is inland, and we never had a car—we couldn’t afford a car. But we went to the river, Tarawera. We spent all our time at the river.

When I met my tāne, we went out to Whakaari because he’s a diver and had a boat. Bonus! We were coming back from Whakaari, we’d spent the night out there and he had gone spearfishing and I had gone flaffing around on the surface like a snorkeller. On the way home I just thought, This is what I want to do. I don’t want to get in the water and go, “Ooh, what a pretty fish.” I want to know everything I can know about that fish.

I was a lecturer in early childhood education and I resigned and then went back to school with five kids. My youngest was eight months, I think. I started as a first-year marine science student. It was mean. Freediving is amazing. You hold your breath and you dive down and get kai, or you dive down and do stuff, and then you come back up and breathe at the surface. I don’t want to look at pictures, I want to be in the water. Because that’s kaitiakitanga. Tanga denotes action. We can all be kaitiaki of whatever, but if there’s no action, then it’s not kaitiakitanga.

I work with hapū, iwi, coastal whānau, working with our people to better understand and care for their rohe moana, whether it be marine species like mussels, kina, whatever. We have a project in the Ōhiwa Harbour in the eastern Bay of Plenty by Whakatāne where our mussels have declined dramatically over the years. There was a massive landslide in 2005, and so they thought all that paruparu, all that runoff and sediment coming into the water, smothered the mussels. Other people said, “No, I think it’s because we’re humans, we’re being too greedy and we’re overharvesting,” but they’d had a rāhui since 2003. In the end, they had a continuous rāhui for close on eight and a half years. And a person said to me, “Oh well, that rāhui was a waste of time, because the mussels are still disappearing.” And I said to him, “Kai te hē, no, that rāhui was really important, because what that rāhui told us was that it’s not humans—well, it’s not overharvesting.”

Mussels provide places for other species to hide from predators. And they’re kai, so you can eat them, too. You know when you get mussels and they have, like, barnacles and stuff going on? Other species also live on them as well. So they’re hugely important ecologically, as well as they filter six to nine litres of water a day. They can clean the paru out of our harbours.

We’re restoring mussels and we’re also looking at pipi, cockle, our tuangi and sea stars, because sea stars are a significant predator and they’re eating our mussels.

I don’t approach science in the way that most scientists do where humans are removed from the world. Because we’re a species. We whakapapa to the other species in the world.

All of our research starts with talking with the old people. We say, “Well, what is it you want to know?”

As a Western scientist, I would walk in and say to you, “Okay, girl, this is what we’re gonna do, this is how we’re going to do it,” and Māori are left, like, “Oh, wait, you’re doing this to me? You’re not doing it with me?” Whereas the way we do research is starting with the question, “What do we need to know?”

I used to say, “When you were a young fella”—or ‘young fella-essa’ to the nannies, and they all laugh—“where did you used to go?” Because when they were little, that means someone took them, their aunty, their uncle, someone older took them, which would take us back further.

It’s quite heavy, it’s taumaha, because it’s a weight of responsibility, about respecting their mātauranga, their knowledge, but promoting it at the same time.

So the old people said, “This is where I used to go to get mussels and the bed ends here, starts there,” or whatever. And then we went down and dove it and mapped the exact size and shape of the bed over time. Our restoration stations are where the beds used to be for generations. But is it still the best place now, because they’re not there? Things have changed. So that’s a question we’re actually grappling right now with our iwi partners, but we’re all problem-solving it together.

Everybody knows something, and it’s just piecing all those pieces together. And so that’s how we do all of our mahi. We have a cup of tea. And then that’s the prelude to the action. And we go out and do something.