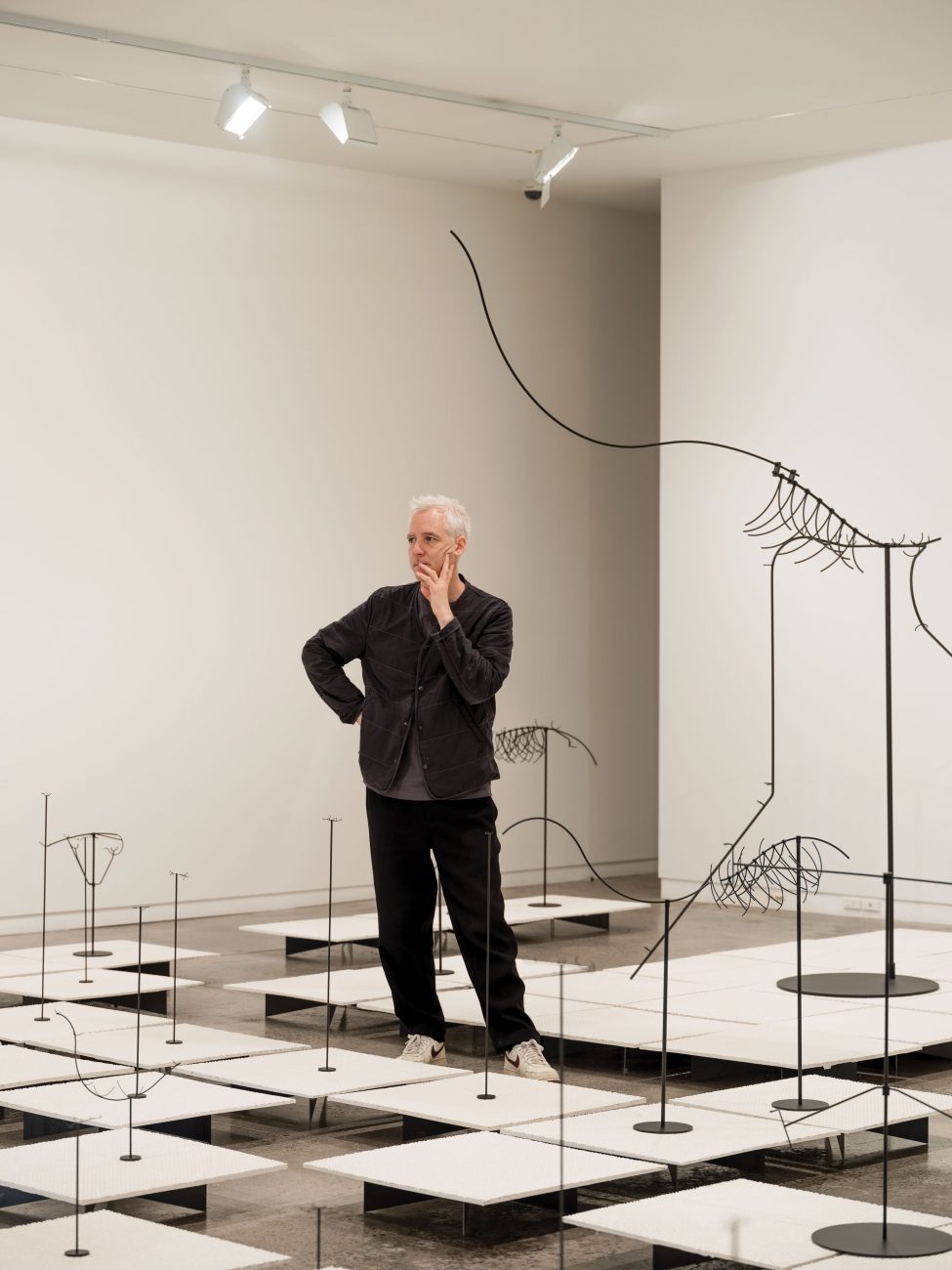 Walk into Dane Mitchell’s latest exhibition and you immediately think: birds. It’s in the sweep of necks, the splay of feet, the sense you’re being keenly watched. But there are no birds here—it’s their absence that’s the trick.

You know the wire mounts that museums use to hold onto their taxidermy displays, their fossil samples? Mitchell has worked with Stephen Brookbanks, who used to make mounts for Auckland War Memorial Museum Tāmaki Paenga Hira, to build a mount for every extinct bird of Aotearoa.

“It’s a monument of loss, a monument to vanished things,” he tells a couple who wander in.

Mitchell likes to talk about ideas. He doesn’t often talk about himself. He talks to me about the idea of talking about himself for a few minutes, then he seems to settle into it. Auckland kid through and through. Moved house 18 times before he moved out, at 18. Loved art school. Especially given what high school was like.

“Oh, it’s so gross. I mean—that place … It was a kind of horror show, quite frankly. It was a violent place, man, it was not good.”

He remembers one wonderful art teacher, but says he was discouraged from making art or taking the art-related subjects he loved. Upshot: “I vanished into the art room, basically.”

Today, he is extremely successful. He’s won a string of accolades and is one of the few artists in the country to have ditched the day job.

It takes a particular sort of self-confidence, I venture, to make the sort of art that he does—the sort that asks people to think, and sometimes participate, rather than simply look. It requires unusual faith in one’s own ideas. Where does that kind of self-belief come from?

Mitchell says he was always a confident, curious kid. His parents gave him and his siblings free range. When he read Charlotte Grimshaw’s memoir The Mirror Book, he was taken by her descriptions of an Auckland adolescence: “It just felt very familiar, that kind of roaming, sprawling, nightwalking …”

He likes to bite right into things. He’s just knocked off all six volumes of Karl Ove Knausgård’s notorious memoir My Struggle. “I know, right? Can you believe it?” He answers questions—any questions—at eloquent, artsy length. (Broadcaster Kim Hill once laughed in the middle of one such response: “I was wondering whether you remembered the question!”)

Standing in his great flock of non-birds, he talks for a time about museums, the human urge to contain and catalogue and scaffold. He talks about his Post Hoc project conceived for the 2019 Venice Biennale, which revolved around a preposterously long list of things that had in some way disappeared or become obsolete. (The list took an AI seven months to recite, and included lost islands, abandoned oil platforms, extinct languages, things that melted, silent radio stations, discontinued fragrances, et al.)

All I can think is: does it not make him terribly sad, obsessing over the birds, over all we’ve lost? “It was exhausting, and sad, thinking about a lot of these things, working with lists of vanished and gone things. But there’s a conjuring trick at play here, too. Because saying something produces reality. Things are kind of called back up.

“These mounts have become really sculpturally super interesting to me,” he adds. “The way they’re emblematic of our wider approach to the world: we grasp it, we scaffold it … we seek to hold it still.” He likes, too, how in the white gallery space they’ve taken on the look of line drawings.

Some less-esoteric observations: Lots of the mounts are topped with short curls of wire that look like the feet of small birds. Squint and you might think a whole flock has carked it cartoon-style, their stiff legs pointing comically skyward. Also, decoding the exhibition is pleasingly like doing a crossword. There are no labels on the mounts—you have to refer to a key. After a while it becomes easy, and satisfying, to find meaning in the void.

There are even funny moments. One mount is shaped like a wire cradle; you understand at a glance it was made to hold a proud, puffball chest (check the key: yep, it’s a laughing owl). Mitchell likes the jaunty zig-zags of the “wings” on the Haast’s eagle. He has them tucked into a downbeat, resisting the “ta-da” moment of the full wingspan. I’m tickled by the fact that the wires on the stout-legged moa mimic its big-boi thigh bones, and that the wires made to hold rib cages look like rib cages themselves; the way they make you think about the phrase rib cage.