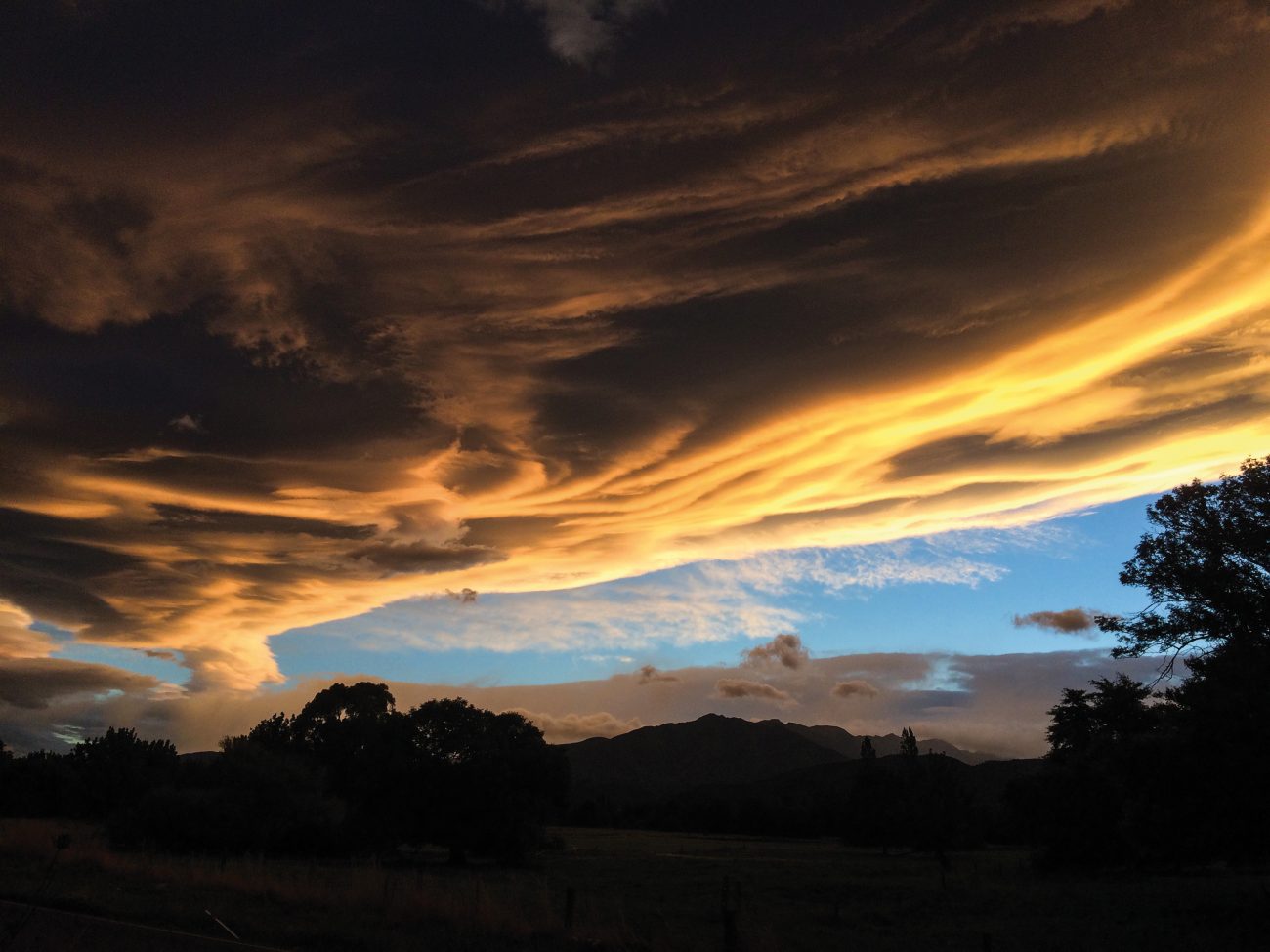 Normally in January we watch the tropics for signs of dangerous storms that might threaten New Zealand. This year, however, we had two lows deepen explosively as they charged across the south Tasman Sea towards the South Island. Their rapid development occurred as they crossed an area of the ocean just east of the state of Victoria, where the sea-surface temperature was 3 to 4ºC warmer than average.

The warm ocean fed energy into the storms in two ways. First, heat was transferred directly to the air by conduction. Second, significant amounts of liquid water evaporated into the air. Changing liquid water into water vapour takes a lot of heat—more than two million joules per kilogram. Once the air begins rising inside the developing storm, some of its water vapour condenses to form cloud droplets and rain, and in so doing releases the heat used to evaporate it.

The air coming off the Australian continent already had higher water vapour content than normal—inland parts of western Australia had four times the average rainfall during January, and some of this rain had evaporated back into the atmosphere.

In the case of the explosive deepening of a low, the heat released by condensation accounts for as much as half the drop in pressure around the low centre. The same process drives the action in thunderstorms and tropical cyclones. (In the tropics, where the amount of water vapour in the air is much higher than around New Zealand, the release of heat as water condenses accounts for around three-quarters of the heating of the atmosphere.)

The term ‘explosive cyclogenesis’ was coined in the 1970s by meteorologists in the United States studying lows off the East Coast that deepened by as much as 60 hectopascals in 24 hours when continual cold air blew offshore and interacted with warm air heated by the Gulf Stream. Initially, a threshold of 24 hectopascals in 24 hours was proposed for deepening to qualify as ‘explosive’, but the criteria have been modified according to the latitude of the low to allow for the effects of the Earth’s rotation, so a drop of 18 hectopascals is sufficient around New Zealand.

The first deep low to hit New Zealand in January passed just south of Fiordland before dawn on Thursday 19 January with a central pressure below 970 hectopascals.

A dartboard of isobars covered most of the country, bringing high winds to most places.

The strongest winds were over parts of Wellington and Wairarapa, where gusts of 150 kilometres per hour were recorded. Heavy rain fell over the Southern Alps, with between 200 and 300 millimetres falling over a large area in 30 hours. Flooding occurred in many places and massive slips brought tonnes of rock down over roads and railway lines near Otira and Arthur’s Pass, which workers took days to clear. The Lewis Pass was also blocked for some hours. Heavy rain spilled over the main divide into the Canterbury headwaters, bringing the Rakaia and Waimakariri Rivers into flood.

The second low followed three days later, with a central pressure of 971 hectopascals just before it crossed Buller and north Canterbury on the morning of Sunday 22 January. As this low centre was further north, the wind flow was northerly over Golden Bay, where 250 millimetres of rain fell, compared to around 100 millimetres during the northwest flow of the first storm. In the Waingaro Valley, 150 millimetres of rain fell in five hours (including 41.3 millimetres in one hour), causing the Waingaro River to burst its banks, flooding farmland, destroying fences and closing roads.

The worst wind damage occurred in Auckland, where northeast gusts of 100 kilometres per hour brought trees down, cutting power to thousands of homes.

Cold southerly gales spread over Otago and Canterbury and there was snow in the mountains. Cardrona ski field had a rare January fall of 20 centimetres, interrupting mountain-biking and other summer activities. The low was so big that the air being drawn into the southern side of it was much colder than the air coming in on the northern side. The heavy snow was caused where the relatively warm northerly air wrapped around the low centre and rose over the colder southerly flow.

In addition to the warmer-than-average ocean, the deepening of the January lows was aided by the stronger-than-average westerly winds. Once a low begins to form, the westerly flow concentrates on the side of the low closest to the equator, creating changes in the vorticity that cause the pressure to fall near the low centre. The stronger the westerly flow, the greater the pressure fall.

While the westerlies have been stronger the average over New Zealand latitudes, they have been weaker than average over the Southern Ocean. A type of sea-saw in the atmosphere known as the Southern Annular Mode—which varies over periods of weeks and months—is the topic of on-going research.

The lack of wind close to Antarctica has contributed to a record low extent of the sea ice around the edge of the continent. Antarctic sea ice forms each winter from freezing seawater and is typically around a metre or two thick. Sea ice grows to cover some 18 million square kilometres at maximum extent in early spring, then melts back to around three million square kilometres by early autumn.

When westerly winds are strong, sea ice is pushed away from Antarctica because of the Coriolis effect of the Earth’s rotation. Then gaps open up in the ice, known as polynyas. During winter, new sea ice forms in the polynyas and so the total amount of sea ice increases. This summer, almost all the sea ice has melted over the Amundsen Sea southeast of New Zealand, where the weakened westerlies have been replaced at times by warm northerlies.

Meanwhile, as of mid February, there haven’t been any tropical cyclones in the tropical South Pacific this season. However, the second part of the season is often the busiest, so we are still expecting to see some meteorological drama in the tropics, and some of that may reach New Zealand.