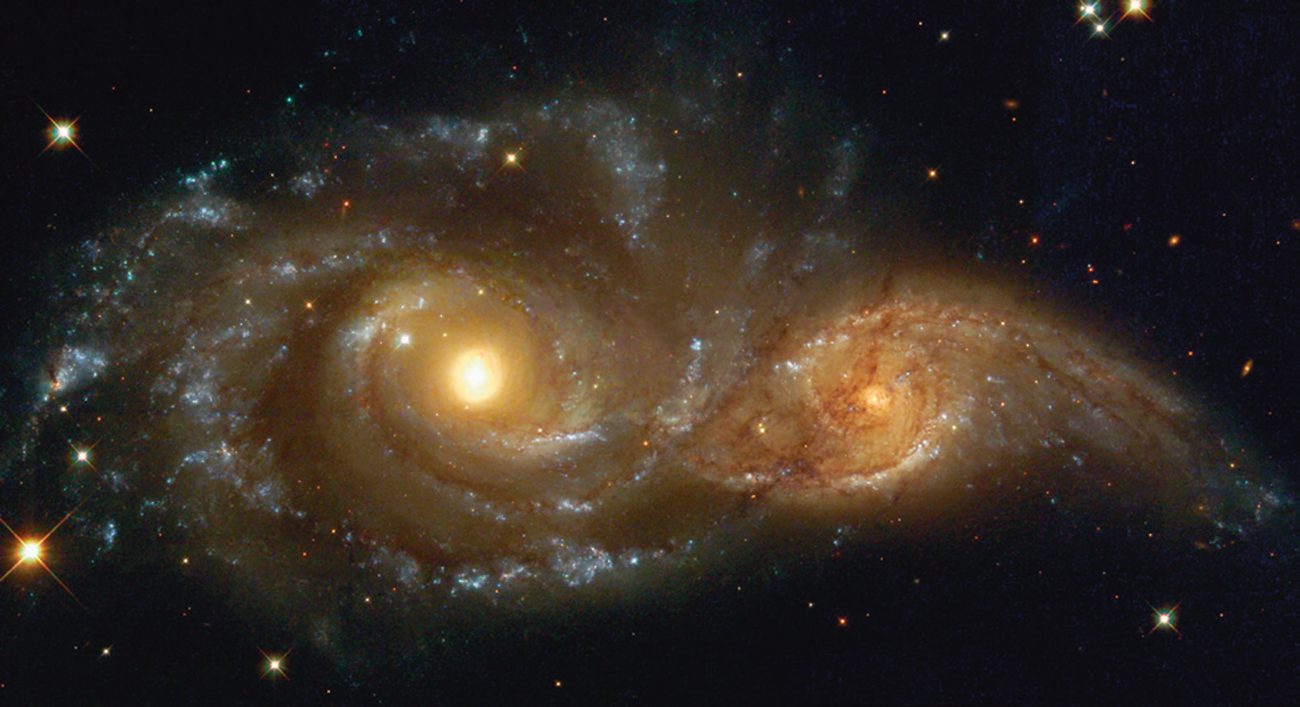 If you noticed something pretty big hurtling towards you at 120 kilometres per second, you’d be worried, right? And if that “something pretty big” turned out to be a trillion stars—a whole, very large galaxy—that would be bad, wouldn’t it?

This is not an academic question. Andromeda Galaxy and our own Milky Way Galaxy are on a collision course. Astrono­mers cannot be confident about the details of this collision as they don’t have a reliable measurement of Andromeda’s rota­tional velocity. This parameter would reveal whether a head-on smash involving stars, planets and dust is likely, or if the dark matter halos—which extend much further out and account for the joint bulk of galactic mass—are what will collide.

Astronomers have long been aware that we are on this course and they are decidedly sanguine about it. With more than two billion years to plan for our fate, a fallout shelter is less of a pri­ority than working out how our species might still be around to witness the fireworks.

Both these galaxies, the largest in the local cluster, have im­mense mass: Andromeda has many more stars than the Milky Way but the Milky Way may be more massive on account of its dark matter density. Computer modelling suggests they’ll skim past each other in two billion years, gravitationally embracing at arms-length in an elephantine waltz, get close again on their second pass and then collide on the third, finally merging in five billion years into a super-massive galaxy.

This dance has been choreographed by T.J. Cox and Avi Loeb of the Harvard-Smithsonian Center for Astrophysics in Cambridge, Massachusetts. Their simulation suggests that gravi­tational forces would mess up both the galaxies’ neat spiral structures on the first pass, wrenching out long tails of stars and gas as they circle, through to the formation of a single oval-shaped galaxy.

What then of our neighbourhood? If their simulation is accu­rate our Solar System has a high likelihood of being exiled to an even more distant outer suburb of the new galaxy—tentatively named “Milkomeda”—than it presently occupies in the Milky Way, and there is a possibility (around 3 per cent) that it will migrate to Andromeda on the second pass, before rejoining the Milky Way at the final merger. The idea that we could one day look out and see our Milky Way from the vantage of a new home galaxy is a bizarre prospect.

While such collisions look impressive from afar, individual objects such as stars within the galaxies are unlikely to collide because they are so widely spaced—the nearest star to the sun, for example, is thirty million solar diameters away.

As a foretaste, a Hubble Atlas of 59 observed galactic colli­sions showing a remarkable variety of dramatic consequences can be viewed at NASA’s Hubble Space Telescope website: www.spacetelescope.org/images/