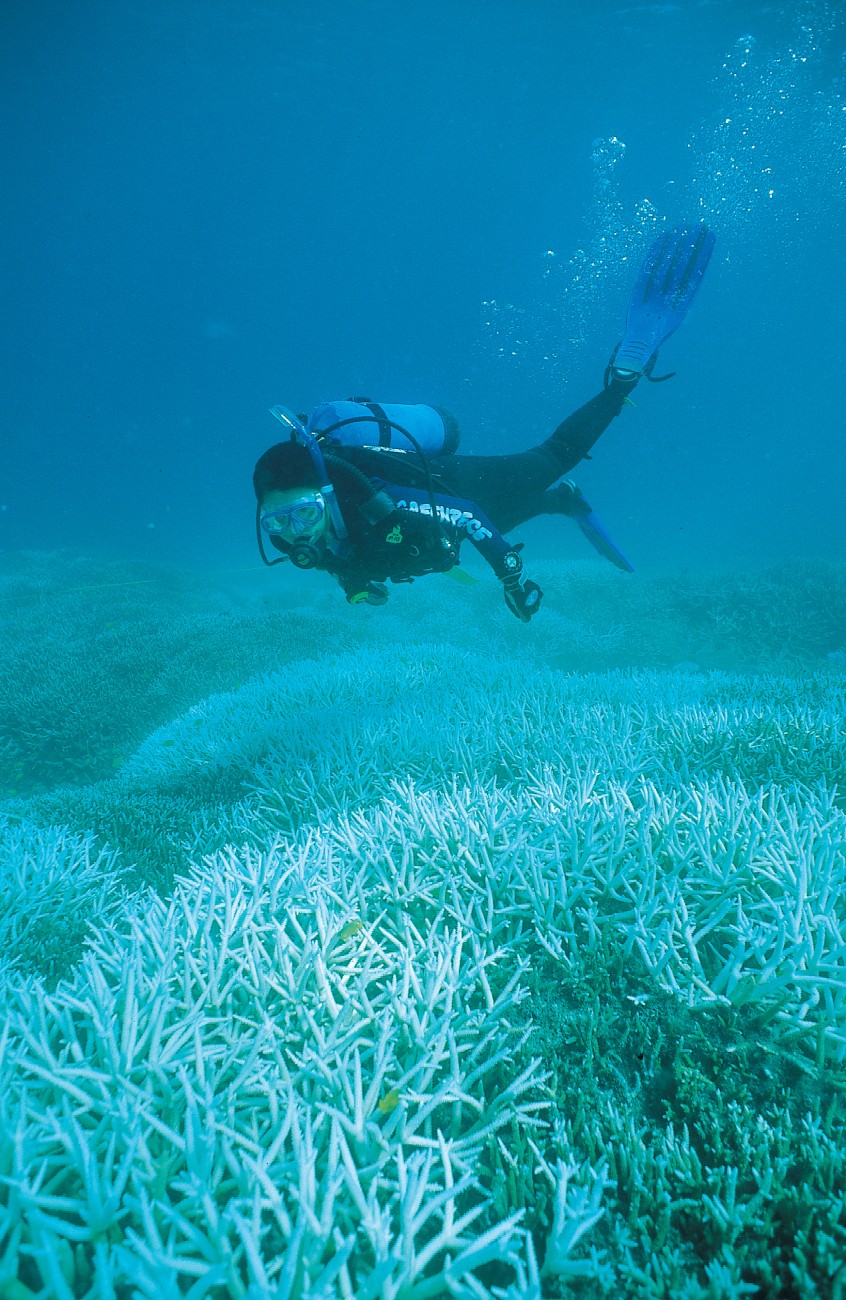 Mass coral bleaching on Australia’s Great Barrier Reef earlier this year is a warning sign of significant climate change, according to the Great Barrier Reef Marine Park Authority (GBRMPA). The authority says this year’s bleaching event “would appear to be the most severe and exten­sive ever recorded.”

Elevated sea tempera­ture—even as little as 0.5 to 1°C—is believed to be the major cause of coral bleach­ing, which results when corals expel the tiny algae (called zooxanthellae) which live in association with them Without these symbiotic algae, which give corals most of their colour as well as their food, coral cannot grow and often die.

Ray Berklemans of GBRMPA says: “Although other factors such as high light intensity, increased levels of ultraviolet radiation and lowered salinity have also been implicated in coral bleaching, their effect in stressing corals is greatly exacerbated near coral’s upper thermal limits.”

Some corals recover from bleaching through recolonisation and multipli­cation of their few remaining algae, but heavy bleaching on coral reefs often leads to the death of 20 to 50 per cent of the corals.

Recent surveys by GBRMPA show extensive bleaching along 1000 km of the reef. These surveys indicate that 88 per cent of inshore reefs are bleached to some extent, and about 25 per cent are severely bleached (where more than 60 per cent of corals are affected).

Dr Peter Harrison of Southern Cross University surveyed corals at Orpheus Island in the Palm Islands group near Townsville, and found 80 per cent mortality of corals. Even massive coral colonies over 80 years old had clied from bleaching.

In the northern part of the affected area, discharge of large volumes of dirty water from rivers after heavy floods probably added to high temperatures to cause bleaching of inshore reefs. In the southern part of the Great Barrier Reef, bleach­ing has more likely been associated with ocean surface temperatures three to four degrees above normal over a huge area of the Tasman Sea, as shown by satellite sea surface temperature (see page 17).

Mass coral bleaching events are a relatively new phenomenon, but have been increasing globally since the early 1980s. Past coral bleaching events on the Great Barrier Reef were recorded in 1980, 1982, 1987, 1992 and 1994, and have generally been associ­ated with heatwaves, but the 1998 event is the biggest so far.

Extensive coral bleaching has also occurred this year at Lord Howe Island in the Tasman Sea, which possesses the world’s southernmost coral reefs.

Evidence is mounting to refute sceptics who consider recent global temperature hikes to be part of a normal and natural cycle. Thirteen of the warmest years this century have occurred since 1980, and 1997 was the hottest year on record.

This year is shaping up to be even hotter.American scientists say that already the global average temperature is 0.6°C above average, and that the world is warmer now than it has been for 600 years. In a National Oceanic and Atmospheric Administration (NOAA) report, scientists claim that “during the past few decades, global tempera­tures have persistently broken previous record highs every few years, but never to the extent observed in 1998. Each month this year has set all-time record high global temperatures. This is unprecedented, and is not likely to occur in a stationary climate.”

US Vice-President Al Gore, in support of reducing greenhouse gas emissions, recently stated: “This is a reminder once again that global warming is real, and that unless we act, we can expect more extreme weather in the years ahead.”

New Zealanders would agree, having experienced temperatures in May 1.2°C degrees above average.

“We can expect the warm trend to continue through at least the winter period,” says Jim Salinger, a climate scientist at the National Institute of Water and Atmospheric Research.

In some areas, reef building could cease and reef structures disintegrate and disappear along with the whole reef ecosystem on which many fisheries and island economies depend. Coupled with sea levels which are projected to rise some 300 mm over the next 50 years, the lack of growth even collapse of coral reefs would open up low-lying lands to severe erosion by the sea. Most coastal human habitation, particularly in Pacific and Indian Ocean island states, is concentrated on unconsolidated sandy ground less than two metres above sea level, which will rapidly erode without reefs as effective wave barriers.

Coral reefs are the most diverse marine habitats on the planet, and their degradation through coral bleaching as a result of global warming would be a major blow to the marine environment and reef-dependent economies. In Australia, the Great Barrier Reef contributes, directly and indirectly, over $A1 billion to the Australian economy every year. Any decline in the reef system and its aesthetic values would impact severely on tourism and related indus­tries.

Earlier this year the Intergovernmental Panel on Climate Change, a group of 2500 of the world’s top climate scientists, sponsored by the United Nations, commented that “Australia’s coral reefs, including the Great Barrier Reef, are among the region’s most sensitive environments to sea-level and climate change.”

Long-term monitoring studies by GBRMPA, the Australian Institute of Marine Science, and various universities are keeping tabs on coral bleaching events on the Great Barrier Reef, and their research is helping people grasp the seriousness of the problem. But it does nothing to solve it.

Only a willingness to limit the causes of climate change the burning of coal, oil and gas can do that.