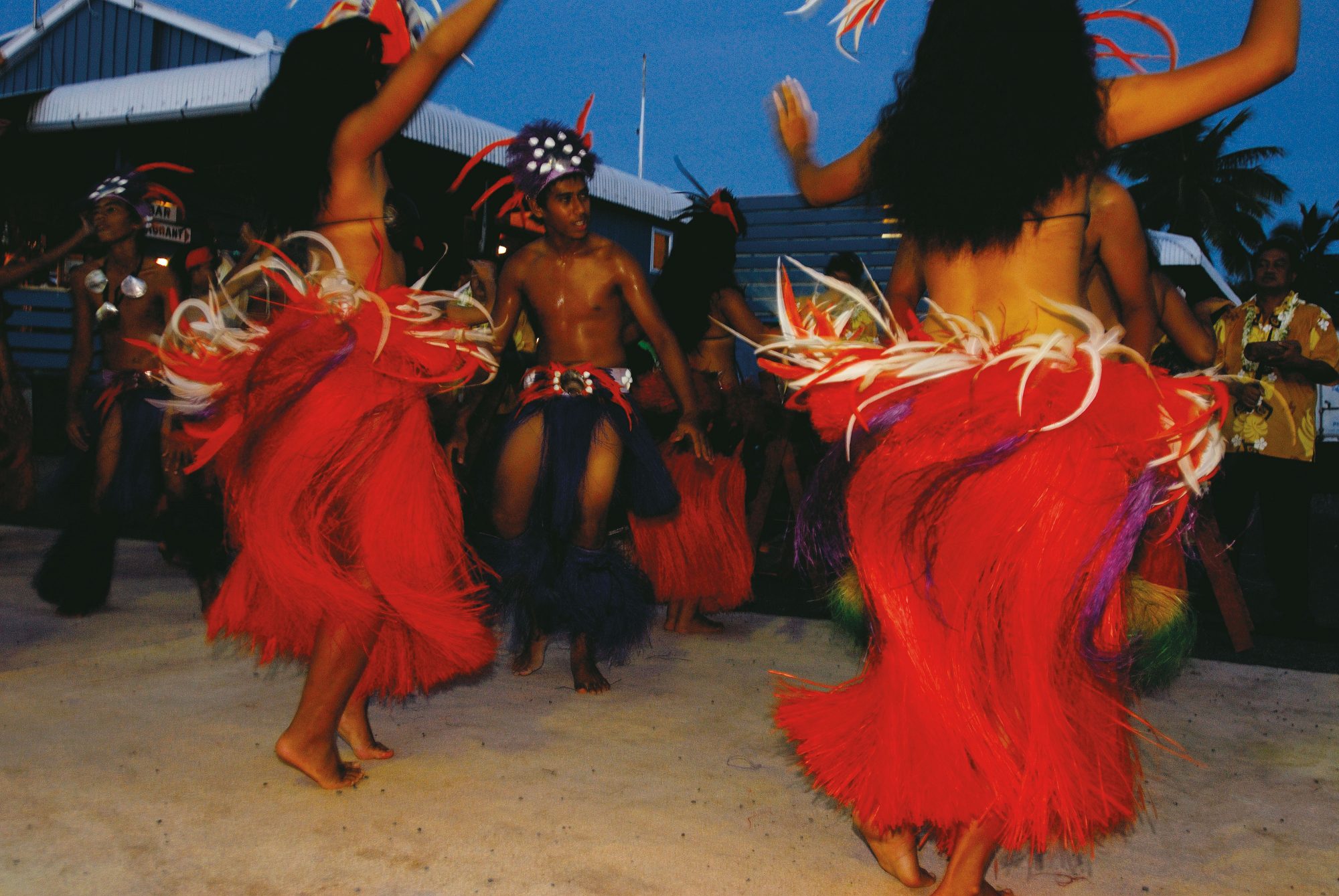 Apate drumbeat reverberates across the Takuvaine valley. Short hollow bursts like machine-gun fire stab the evening stillness and echo through our rented dwelling. Ta-ta-tata-ta. A kilometre away at the national auditorium, Are Karioi Nui, the drummer sends a callout. He’s been doing this every night for the past week. It’s July, the middle of a Rarotongan winter—though with daily temperatures rarely below 20ºC you’d scarcely believe it—and the nightly practices are in full swing for the upcoming Te Maeva Nui celebrations.

Around the auditorium’s peri­meter, the two-story lodges that have been built to accommodate representatives from the 15 islands in the group (with an additional hostel for the New Zealanders) are a hive of activity. This is the Cook Island’s pre-eminent festival and troupes of ex-pats and outer islanders have made a lengthy air or sea journey to the capital to participate.

Initially known as the Constitu­tion Celebration, it commemorates the first steps into statehood and self governance for this tiny country, after its New Zealand administrators had passed the Cook Islands Constitution Amendment Act in 1965 and handed executive power to a democratically elected Westminster-style government. Prior to this event, large gatherings or eva (festivals), had all but faded from community life on Rarotonga. The inaugural Constitution eva, held in 1968, was seen as a powerful nation-building tool for the newly independent country.

In 1994, then Prime Minister Sir Geoffrey Henry requested a new name for the festival—Te Maire Maeva Nui—that would more truly reflect the Maori language and culture. This was subsequently shor- tened to Te Maeva Nui in 2001. Roughly translated, it means “great joyous celebration”.

This year, the week-long festival began with a mardi gras-style float parade through downtown Avarua to the Punanga Nui market. A sundry collection of double-cab utes, trucks, semi-trailers and assorted vehicles ambled along the main boulevard bedecked in a verdant jungle of greenery, mirroring the imposing volcanic mountainsides of Ikurangi and Maungatea that provided the backdrop to the procession.

One float, dressed as a monstrous shark, recreated the legend of Ina, the Rarotongan maiden who hitched a ride atop Mango, the shark, to visit her Mangaian boyfriend. After being bashed on the head with a coconut by Ina, the shark ate her before the journeys end. Another trailer was weighted with an ensemble of pareu­shirted outer islanders providing a mobile weaving demonstration of rito hats and baskets made from dried pandanus leaves.

Mamas, in full song, draped in rauti cordyline leaves, strode behind a truck festooned in coconut branches, with fresh carcasses of tuna and hands of ripe bananas hanging from its canopy. Tereora High School students, outfitted as warriors with faces blackened and head ei’s of natural fibres, issued rousing challenges and chants as they marched past the throngs of tourist spectators lining the roadside. It was all done in a jovial entertaining spirit, with great fun and frivolity. But such performances haven’t always been so much fun.

On his third expeditionary voyage into these waters in 1777, Captain James Cook had discovered Mangaia, but was unable to find safe passage to land so sailed on until he saw Atiu. He sent three ship’s boats ashore under the command of his first Lieutenant, John Gore, and in the company of Omai, the Tahitian priest who had visited England and been fêted by the British nobility.

The Atiuans put on festivities for their guests, performed dances, made speeches, kava was passed around, and the cooking fires lit. However, when Gore’s party went to make their exit, warriors prevented them from leaving, and the seamen began to suspect they may end up as the main course.

Omai attempted to divert them by performing a heiva (Tahitian dance) of his own, but the Atiuans ridiculed him. He then elaborated on the British firepower, telling them the ships could destroy the entire island with a single shot. He warned that unless they were allowed to leave by nightfall, the English would attack. The visitors were then offered roasted pig, but were too anxious to eat out of fears for their safety. Eventually the Atiuans escorted them back to the waiting ships. Gore noted in his journal the Atiuan people were almost indistinguishable from the Tahitians, and “there Are some Verry Pretty Lasses Here I’ll Ashure You”.

The next colonials to visit the islands would put an end to that. Members of the London Missionary Society, accompanied by their Tahitian converts, arrived on Aitutaki in 1821, and on Rarotonga in 1823. In the years that followed, the missionaries had a profound impact on the social, political, economic and cultural lives of the Cook Islanders.

Colluding with the ariki (chiefs), they imposed a strict set of “Blue Laws” on night-time gatherings, marital relations and belief, as well as outlawing cultural practices like tattooing. During this period they also relocated people from the more protected highlands on Rarotonga into coastal settlements, centred around mission schools and churches. Clans were resettled in new villages outside old territories and, as a result, longstanding associations with neighbouring tribes were extinguished.

This all had a bearing on any outward expressions of customary celebration, which now became focused around the church and Sunday worship. Ancient marae sites were abandoned and became overgrown and disused. Noteworthy rituals like an eva at the rising of the Matariki (Pleiades) constellation,  “welcomed with frantic dances and discordant shell-music”, were deemed to be heathen practices, and no longer observed.

Today’s festivals are likely to intertwine the concepts of ancient rituals with Christian beliefs. Pantomimes and dance performance will often poke fun at the missionary chapter of Cook Island history. Events like the Tiare festival celebrating the blossoms of spring, and its Miss Tiare beauty pageant, are modern manifestations of a pre-Christian tradition, Vaka-pupu, the presenting and parading of attractive maidens.

Tourism, now the largest driver of the economy, has initiated much of the renewed enthusiasm for these festivities, sponsoring the bigger events on Rarotonga. But whether entertaining tourists or reigniting cultural pride for themselves, at the heart of all Cook Island festivities there will always be drumming, dance, song and, nowadays, a great deal of laughter and fun.

The Chathams—New Zealand's wilder side