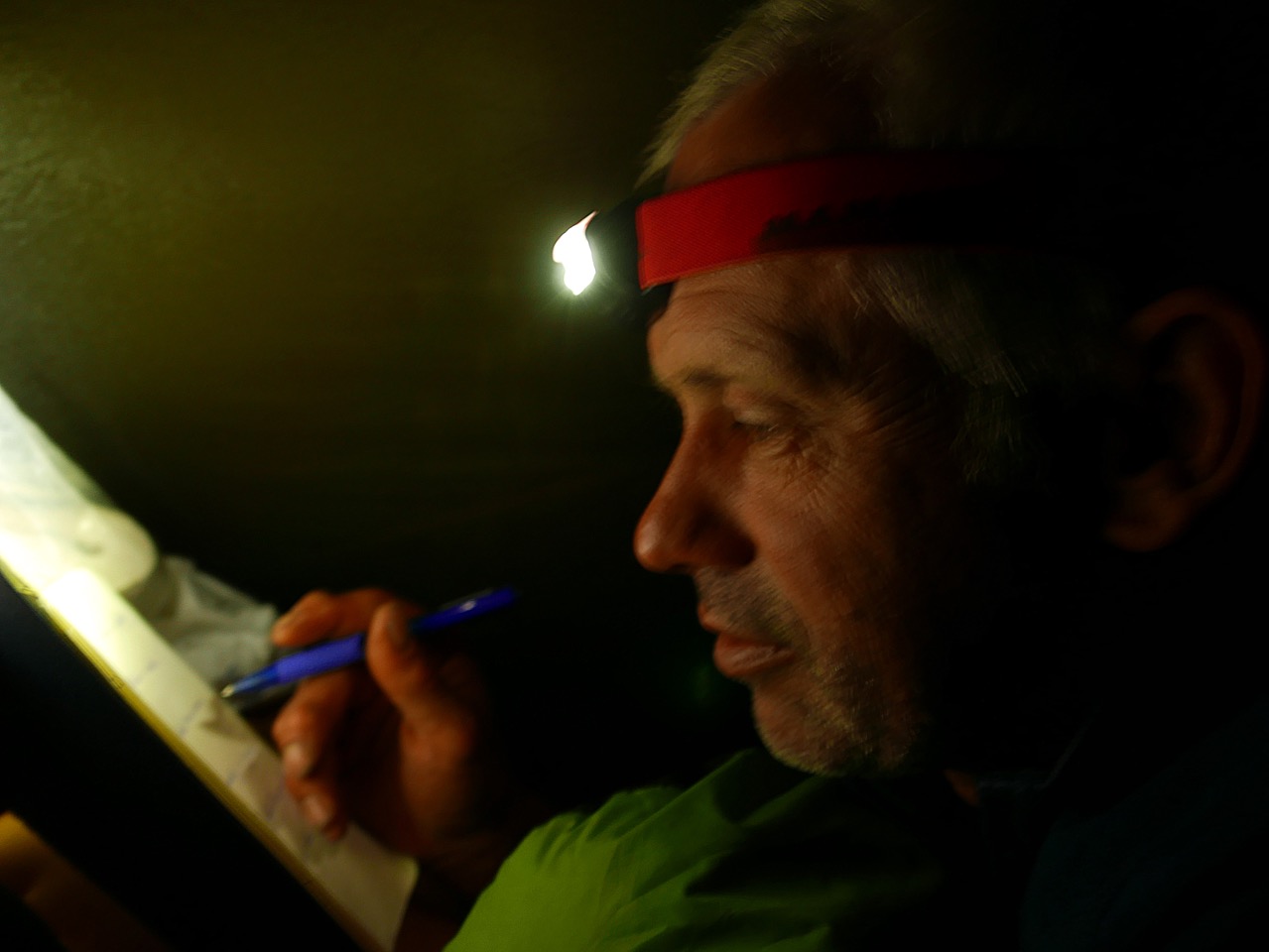 MA: I was driving taxis in Sydney and doing bursts of rock climbing. But I was missing the South Island forests—probably romanticising them, the verdant expanse. I had the idea of walking the length of the South Island, so I plastered the walls of my flat with topo maps to work out a route, then I came back and set about doing it. I went into the forest of southern Fiordland and got thrashed. It absolutely poured. I was wringing out the sleeping bag three days in a row. On my own. Feeling very isolated. Mildly hypothermic. When I finally got to the Dusky Track, I walked what is normally a five-day track in two. I just wanted to get out. I got back to Dunedin and thought, stuff that, that was too hard.

KW: After that debilitating experience, what drew you back to have a second crack at it? Was there a shift in thinking?

MA: The big change was that I had a major mountaineering accident on Mt Douglas. My climbing companion and I got caught in a blizzard. We had no shelter, the snow was settling three feet in an hour, and we didn’t have a shovel to build a snow cave. The fact that I ended up spending three weeks in hospital was because, yes, it was a horrendous storm—400 people were stranded at Mt Hutt by the same storm—but also we weren’t properly prepared, in equipment and skills. On the other hand, it was a pivotal moment in my life. Out of dealing with that, I got a clarity about what I wanted to do and how I wanted to approach things. When you’re on a mountain trying to stay alive—and it really was a fight to stay alive, there’s no question about that—you can find that sort of clarity.

KW: Was it soon after that experience that you picked up the trip again?

MA: It was immediately after. I was sitting in hospital, and there are a lot of tears when you look at your frostbitten hands and realise you’ve really stuffed up your body. Really maimed it. At one point it looked like they were going to have to amputate a lot of fingers, but all they ended up amputating was the bone at the end of one. My fingers today look pretty gnarly, but I was lucky. And I thought, I really want to go back and do this trip. So I geared back up for it, told only half a dozen people—it was to be my own personal journey—and went back into the bush.

KW: A journey with what intent? Discovering a sense of belonging? Relationship with place?

MA: Immersion. A sense of being lost within this world. The motivation had nothing to do achieving anything. It was the walking. It was the place. And it was being really alone and happy in that. Those three things meeting together. Getting to know myself in the place through the process of walking. And getting to know walking in its essence, through being off tracks. A month without tracks in Fiordland is an amazing experience. I came out into the Eglinton Valley, and here’s this open landscape the likes of which I hadn’t seen in a month because I’d been walking in tight folds of land.

KW: You and I have talked a lot in recent years about relationship with place. And on this trip following Barrington we’ve been thinking about the question of how you sustain and intensify the wilderness experience, rather than assuming it will inevitably decline, reduced by the thousand cuts of economic exploitation. How do you intensify wilderness?

MA: There is a lot we can do to make these places more wild, through designing a more intense wilderness experience. For instance, we could trap the forest’s pests each night we stay. We could eat its venison. We could use its natural fibres in some way—for shelter or for sleeping on. And we could travel slower, walking off tracks, even having a heavy pack to make things move slowly. Then there’s cookers. Do we use a Saudi Arabian-fuelled cooker that is made in Vietnam and gives profits to a US company, or do we collect fuel from the forest? The other night when we built a fire you were saying, “We won’t go for beech, which doesn’t burn well, we’ll spend more time looking for rata.” That’s a sign of getting to know a place. The opportunity is there for us to have an intimate relationship with our native ecosystems. Belonging in Aotearoa won’t come from a life dependent on exotic ecosystems that were brought to this country, it will come from working with the native ecologies of the land.
We should be thinking that one day we might be able to eat Kentucky Fried Kereru. Imagine what the ecosystem would look like for that to be possible—a forest in which our birds are so abundant that we could hunt them rather than deer. Suppose a hunting community decided to exterminate all the pests in a large conservation bock—from deer down to mice. Might it then be possible to have a licensed season for kereru in that area? If that was on the table, that forest would be cleared of pests within a year, because people would like to eat kereru. And would not the forest be better for that? That could be a way to incentivise the eradication of pests. But we have this view that if it’s native we must not use it.

KW: The good thing about something like “KFK” is it’s additive, not just subtractive. It’s not just that we would have succeeded in controlling or eliminating a lot of pests but that we’d be bringing back something special into our cuisine, into our culture and experience of being New Zealanders.

MA: I do come back to the fact that a third of this country is conservation land and we need to see it for its social and economic value, not just as something we spend our taxes on to preserve. We have this view that the only use for the wild is for tourism or biodiversity. We can’t imagine an economy based on the relationships with nature that we’ve created. When DOC says “conservation for prosperity” I think the department’s meaning is that somehow conservation land provides ecosystem services and tourism. What we need to understand is it can go much, much deeper than that.

KW: The wariness I have about that branding—”conservation for prosperity”—is that it sounds like a neoliberal framing. Capitalism encroaching on and subjugating the entire natural world, at the expense of relationship with place. Aren’t we using the wrong language here? Using monetary language for a value that can’t be measured by money.

MA: If you accept the idea of triple-bottom-line sustainability [economic, social and environmental], then economic prosperity comes out of social and environmental value. Our native ecosystems have immense environmental value. We need to unlock the social value in how we interact with those native ecosystems, and out of that can come economic prosperity.
DOC has had $3 billion on public money invested in it over the past 10 years. That’s great. But what’s the export potential of the products, services and systems that DOC has created on our behalf —whether that’s track counters, trapping methodologies, how to develop conservation management strategies, how to organise volunteer teams, how to commercialise conservation partnerships. All these things can be embodied into intellectual property and sold to the thousands of managers working on conservation challenges around the world. It’s something that could be one of most valuable exports this century.

MA: Yes, and also our behaviours. Landscape is a powerful thing for people. It gives us a sense of belonging. Being part of something—whether that’s to a place or community or a social group—is a far more powerful motivator to people than, say, abstract ideas of sustainability or a sense of being environmentally responsible. It goes back much more into our primal sense of what it means to be human.

KW: The question I keep circling back to is: how do we redefine the human place in nature. Given that that interaction has so often been negative, a net loss for our ecosystems, there’s a certain logic to the approach of separating nature from human impact by enshrining it in protected areas. Drawing a line and having production on one side and protection on the other. But we both acknowledge that’s a flawed approach. How do we redraw that line? Are there principles that can tell us when not to build a road or develop a mine, but still be welcoming to human activity, presence, participation within our remaining native ecosystems? How do we reintegrate the human into the nonhuman world in a way that isn’t terminally destructive of that world?

MA: I think we have to ask if we are seeing nature solely as a quantum of biodiversity or also as something that makes us rich. I’m not talking about consuming it as a commodity, in the way that wilderness has always been consumed as economic frontiers expand. Rather it’s about enjoying the value that can be created out of our relationship with nature. That, actually, biodiversity can be increased out of these relationships, not decreased. The fastest growing outdoor recreation in this country is conservation—planting, trapping, citizen science, drawing kids into the wild. Not those Ed Hillary achievements of last century. I think we should be focusing on the experiential value people gain from the conservation estate.

KW: An example would be night-time kiwi walks in Waipoua forest. Kiwi have always been there, but until recently no one thought to invite tourists to have that special experience of being in the forest at night and hearing their haunting call at first hand.

MA: Yes. The main thing for me is that you have to remain optimistic and ambitious about our relationship with nature in this country, rather than pessimistic and defensive and always seeing nature as being diminished and demeaned. We just have to look at the way nature is celebrated by increasing numbers of New Zealanders—it’s wonderful. It is the taonga, the treasure, of this country. That’s the personal legacy of the journey I took—the utter magic of the wild. And that’s always with me. You can go out on the river flats down there and look around and realise how big it is. A great forested expanse. There are not enough lives to roam it all.