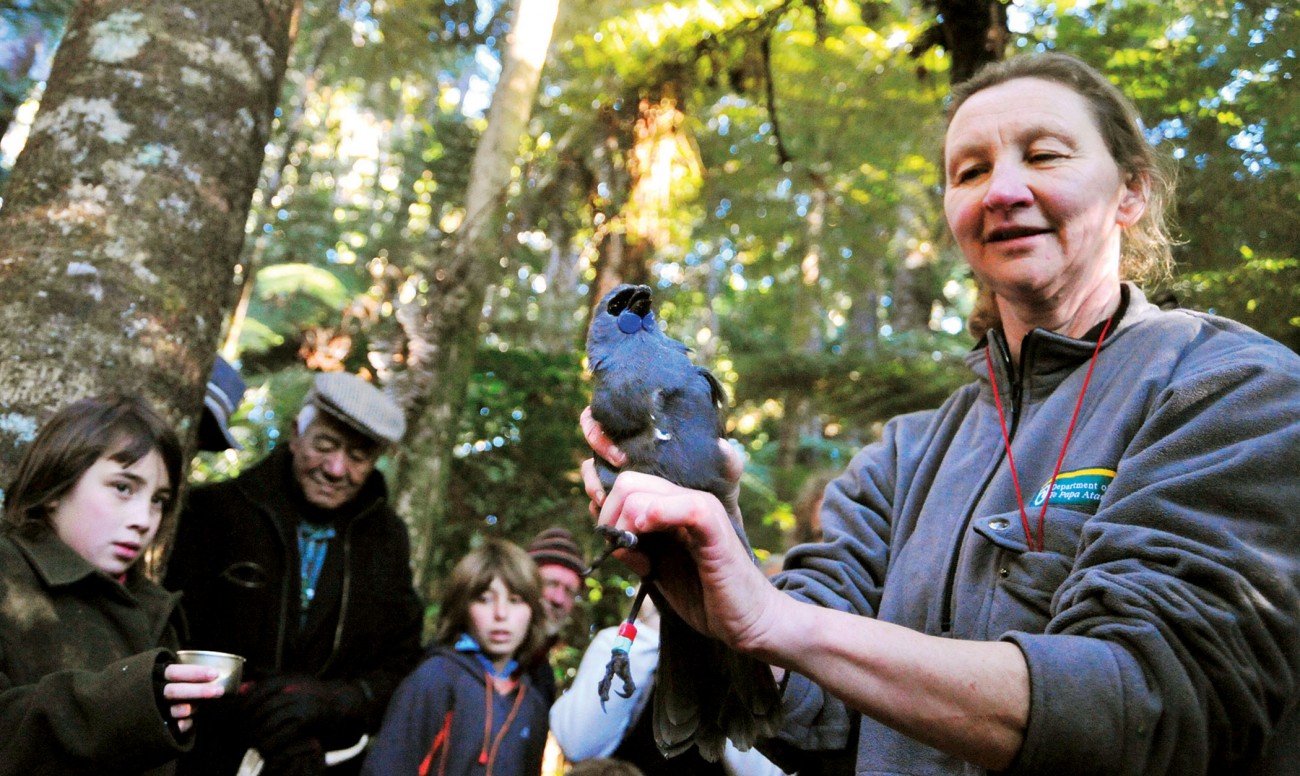 It was the first week of spring and dur­ing a solitary week of sunshine in months of rain, a pair of kokako from the King Country were released into the Waitak­ere Ranges in West Auckland.

The area is owned by the Auckland Regional Council and, for several years now, has benefited from the actions of the volunteer group Ark in the Park. Like many similar organisations around the country, its aim is to rid the area of mammalian predators, although the Ark is doing this on a particularly grand scale. So far, its members have installed 2160 bait stations, 50 m apart, covering 1200 ha of bush.

Robins, whiteheads and stitchbirds have been reintroduced over the past few years, and on September 8 the first two kokako were also ready for release.

Though the birds were still in their boxes, bell-like sounds were already ringing out from the trees, thanks to speakers around the release site broadcasting looped kokako song. Researchers call it acoustic anchoring, and the theory is that the birds will think that if the area is good enough for other kokako then it’s good enough for them, ensuring they stay there.

The first bird was tenderly removed from his box by DOC scientist Hazel Speed, who has spent 20 years work­ing on kokako and much of the past decade studying a population in the Hunua Ranges, just southeast of Auck­land. The bird was held aloft, con­fronted by a television crew, at least a dozen whirring cameras and a crowd of enthralled spectators.

The bird’s response was to bite Speed’s hand, repeatedly. Speed flinched but valiantly held on long enough for every­one to get a close-up view of the striking grey creature with the ninja’s mask and vivid blue wattles. “It’s not really a flesh-eater,” she said. ARC chairman Mike Lee tried to feed it a banana.

Eventually Speed sat the bird down on a fallen tree trunk and it promptly hopped up the nearby trees and disap­peared into the canopy. Soon after, a female was removed from the box and similarly showcased before she, too, was allowed to fly away. Someone sang a waiata, an elderly gentleman began to incant in Maori, a stitchbird raised its alarm, and a couple of North Island robins fluttered nearby. Ark in the Park Chairman John Sumich stared up into the canopy where the bird had disappeared. When he lowered his head, he was grinning deliriously. He then flung out his arms and hugged the first person he saw, who happened to be the New Zealand Geographic journalist. This event was conservation staged largely for the benefit of the media and stakeholders, but behind it lay years of hard labour by volunteers prepared to spend their weekends on the mundane tasks of weeding, baiting, monitoring and raising money for such releases. (Ark had to raise $70,000 for the kokako release.)

People like Sumich first talked about getting the kokako back into the Waita­kere Ranges 10 years ago the birds were last seen in the forest 50 years ago but back then, few took the idea seriously. There sim­ply weren’t enough kokako  left for DOC to take such a risk. Now, contemporary conservation is reaping results that, not so long ago, were dis­missed as pipe dreams.

Three more birds were released two days later, and Speed hopes to release 30 over the next two years. “It’s good for the health of the forest, because [the birds] are fulfilling whatever role they had. And it gives people more of an opportunity to see these things.”