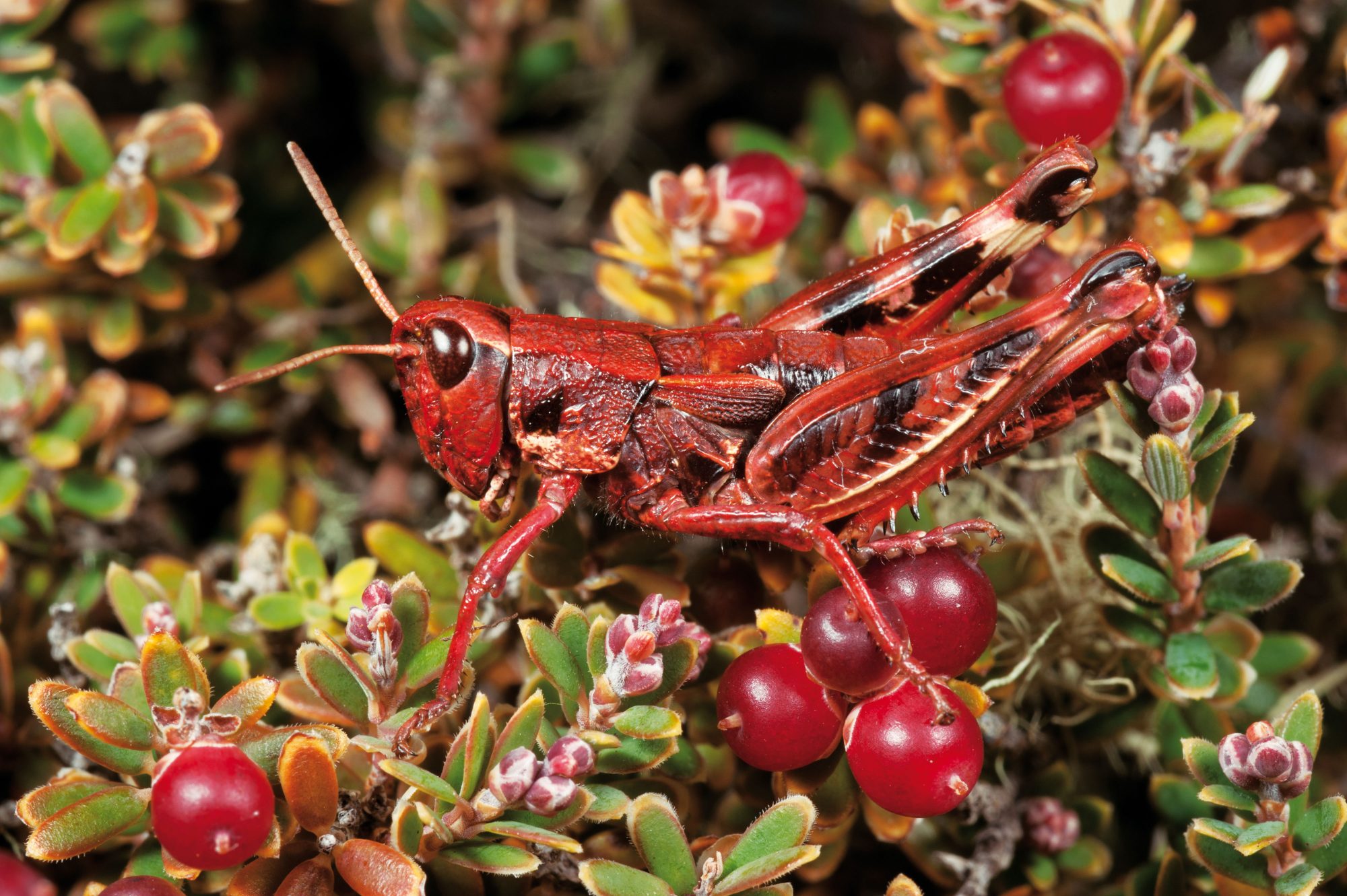 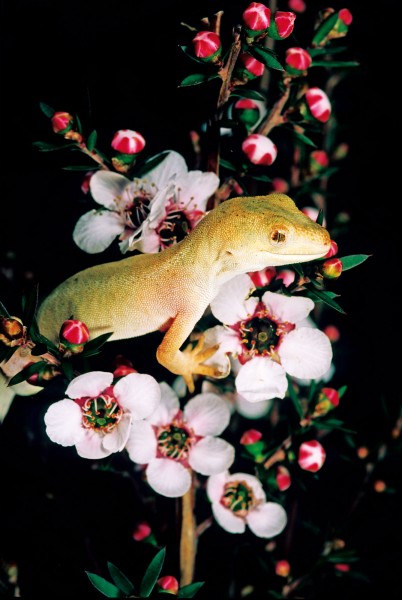 Colour Morphs area form of evolutionary insurance policy—seldom needed, but always there in case there’s a disaster, or a new opportunity. On rare occasions, a colour abnormality may turn out to be advantageous in the wild. In the past, white feathers must have enhanced the survival of a parrot in Australia, allowing it to live longer than others of its kind and to pass on its genes until white feathers were characteristic of the entire population and a new parrot species arose—a white cockatoo. Although white is an uncommon colour for wild parrots, there are several successful white parrot species in Australia; indeed, some have even penetrated into the Lesser Sunda region of South-east Asia. Not all abnormally white birds are albino, however; they may instead be leucistic, or even hypomelanistic.

The white kiwi [Apteryx montelli], at left, is an example of leucism—the dark, normally pigmented eyes give it away. Leucism is a genetic defect in skin cells, rather than in the pigment-producing cells themselves, and eye colour remains unaffected in leucistic individuals. Leucistic  animals actually possess all the pigment-producing cells necessary for colour, but an abnormal gene prevents the colour being expressed in their skin. 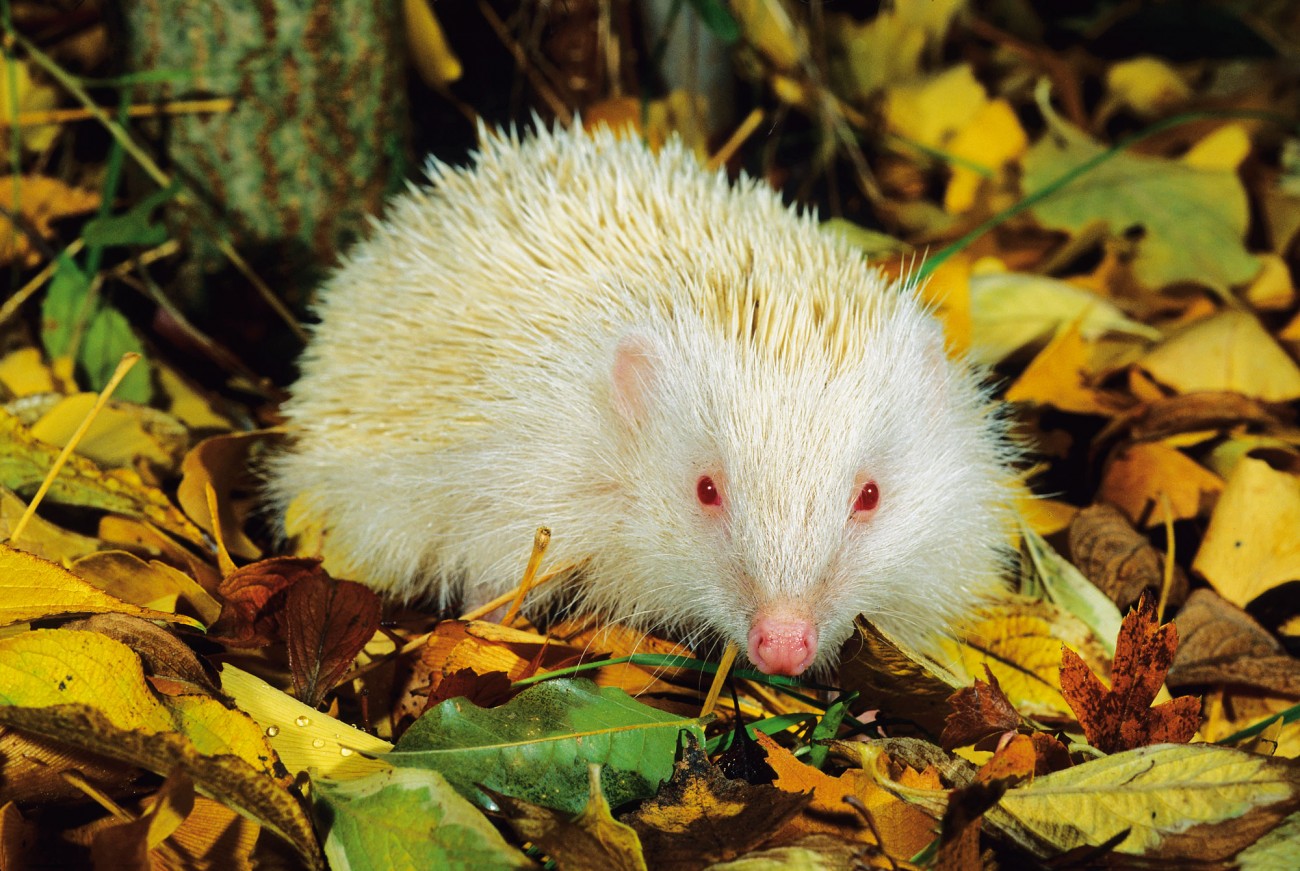 In mammals, the only pigment produced is the brown-black pigment melanin, and when it is not produced, the result is an albino. The white hedgehog foraging among fallen autumn leaves has the characteristic pink eyes of all albinos, caused by the colour of the blood vessels themselves, visible through the unpigmented eye. [As a result, albinos suffer from poor vision.] An absence of pigment in the skin renders both albinos and leucistic individuals sensitive to the sun’s ultraviolet rays, as pale-skinned Europeans who suffer from both sunburn and skin cancer well know.

Hypomelanism is a mutation whereby melanin production is greatly reduced, yet not entirely absent. The ‘white’ tree gecko [Noultinus elegons] on pink-flowering manuka has extremely low levels of pigment in its skin and scales. Like many animals lacking pigmentation, this gecko will be more vulnerable to predators than its brethren, and hypomelanism will again be selected out of this population. 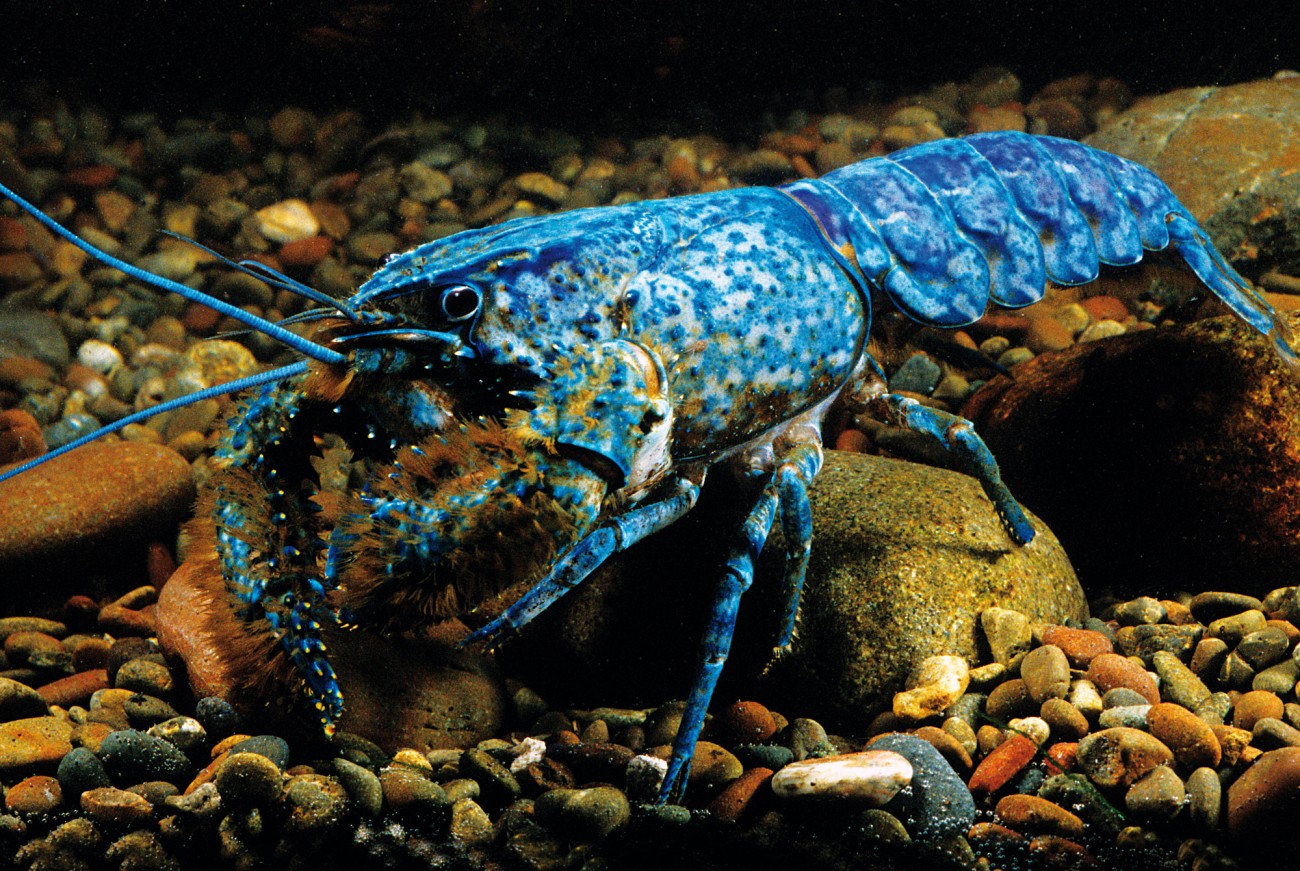 Cobalt Blue May seem a risky colour for a koura, which are typically brown. But surprisingly, blue genetic variants of these freshwater crayfish are not uncommon in one or two of the deeper lakes around

New Zealand. Blue koura survive because the colour spectrum of light shifts as it passes down through the water, and at a certain depth there is no visual difference in colour between a blue crayfish and a brown one—and therefore no difference in predation either.

Colour in birds’ plumage is the result of two very different processes—there are colours resulting from pigments, and “structural coloration” that is the result of interference effects as light passes through fine structures in the feathers. Blue is generally a structural colour, due principally to a back scattering of light in the spongy structure of the feathers’ barbs. In green birds, yellow pigment fills the cortex of this spongy structure, ‘tinting’ the blue so it appears green. 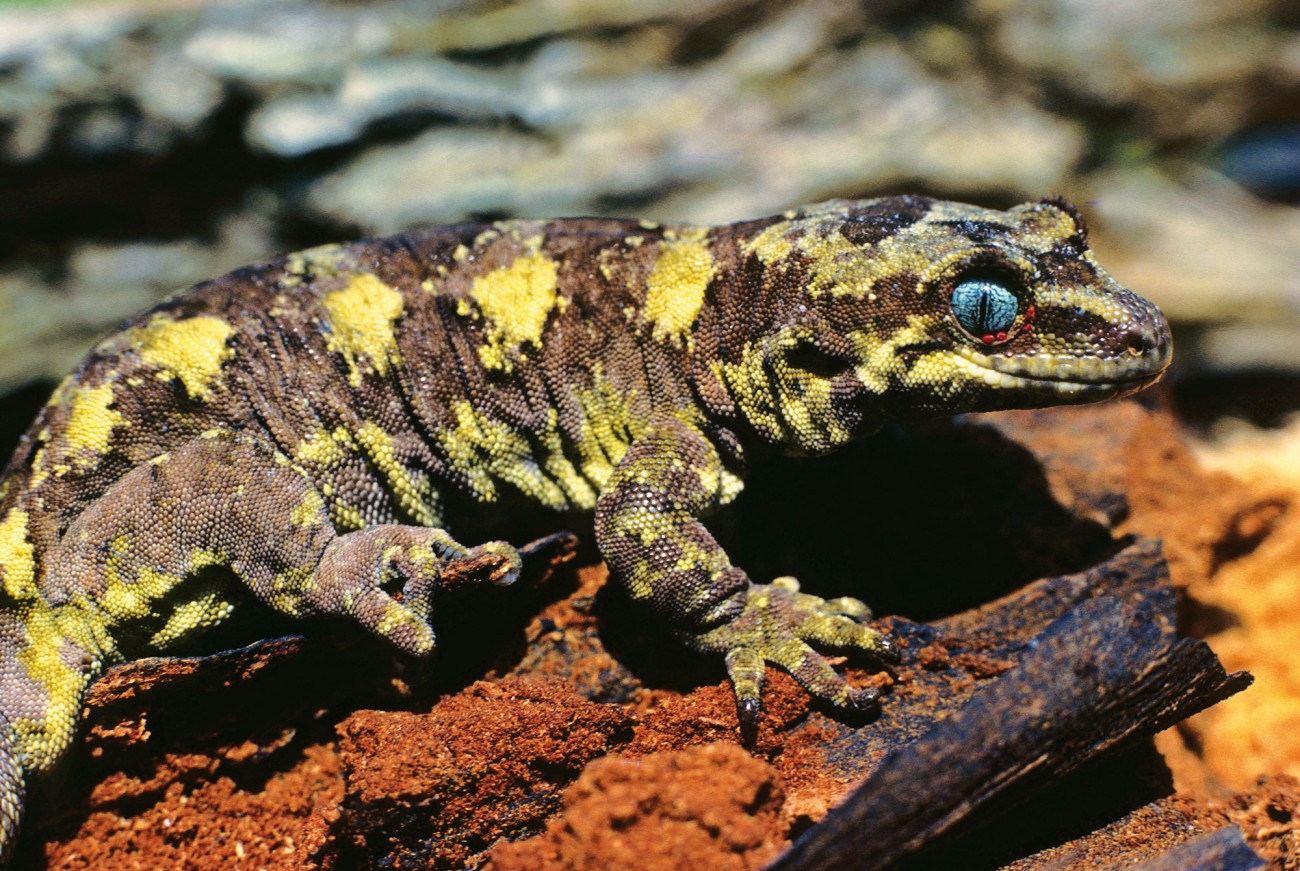 Humans have a fondness for blue and have selectively bred ‘blue’ parrots from green ones since the early 1900s, when the first blue budgie was born to captive green parents. But despite an extraordinary range of colours being found in parrots, only one blue colour morph of New Zealand’s native  kakariki, or red-crowned parakeet [Cyanoramphus novaezelandiae], has ever been observed, in Southland in the 1800s. The greenish appearance of a normal kakariki depends in part on the presence of psittacine, the pigment responsible for the reds, oranges and yellows in parrots, and when it is absent, as in this mutation, the feathers look blue and the red crown is rendered totally colourless.

These unusual colour characteristics in individuals can in time become the distinctive characteristic of an entirely new island species, as was the case with Tahiti’s violet lorikeet, a member of the same family as kakariki. It demonstrates Darwin’s engine of evolution at work; mutations creating diversity, and being tested by predators and environmental pressures.

But as with the blue crayfish, the environment is not always decisive, and mutations can reappear as recessive genetic traits. Forest geckos throughout New Zealand have a modest eye colour range, from grey to yellowish brown, but about one in four geckos of the sub-species Hoplodactylus granulatus [‘southern forest’] manifest iridescent blue eyes—a mutation yet to be sifted through evolution’s sieve. 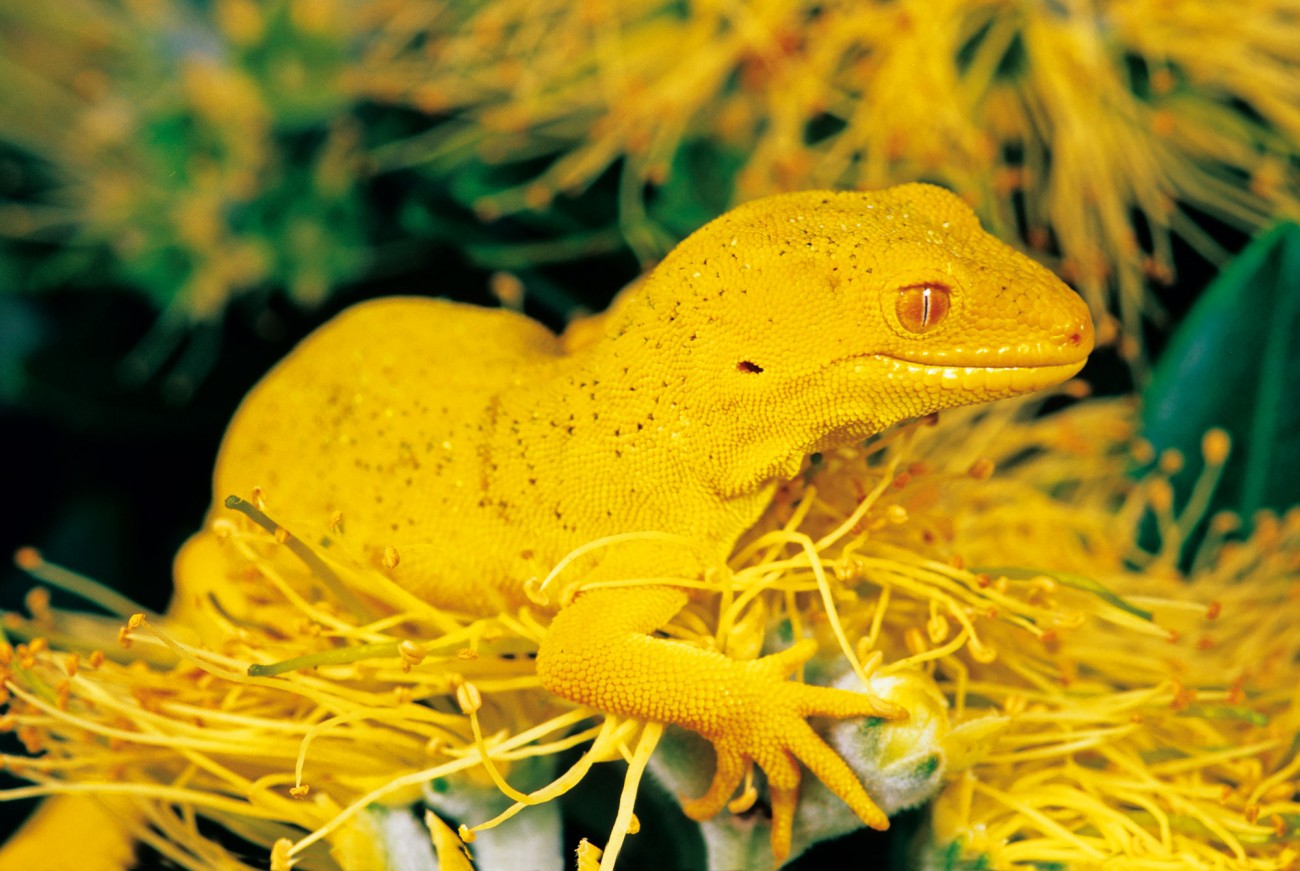 The yellow flowered form of southern rata [Metrosideros umbellata], above, was discovered many years ago growing in the rata forest above Otira, a small township near Arthurs Pass. In a hot summer when the typically scarlet flowers of southern rata blanket these slopes, you can still stand at the side of the main highway and see the wild sulphur-yellow tree standing out in the far distance.

On a smaller scale, frogs and reptiles have three kinds of pigment-producing cells. They include melanophores for black-brown pigment, xanthophores for yellow and reddish pigments, and iridophores, which impart a shiny iridescence. When the black-brown pigment is not produced but the xanthophores are still producing yellow pigment, the effect is a little similar to albinism, as in the ‘yellow’ golden bell frog [Litoria aurea] below. The frog is not strictly speaking an albino [as ‘albino’ means white] but is called ‘lutino’, as bird breeders refer to cage birds with yellow plumage and pink eyes from the same condition. 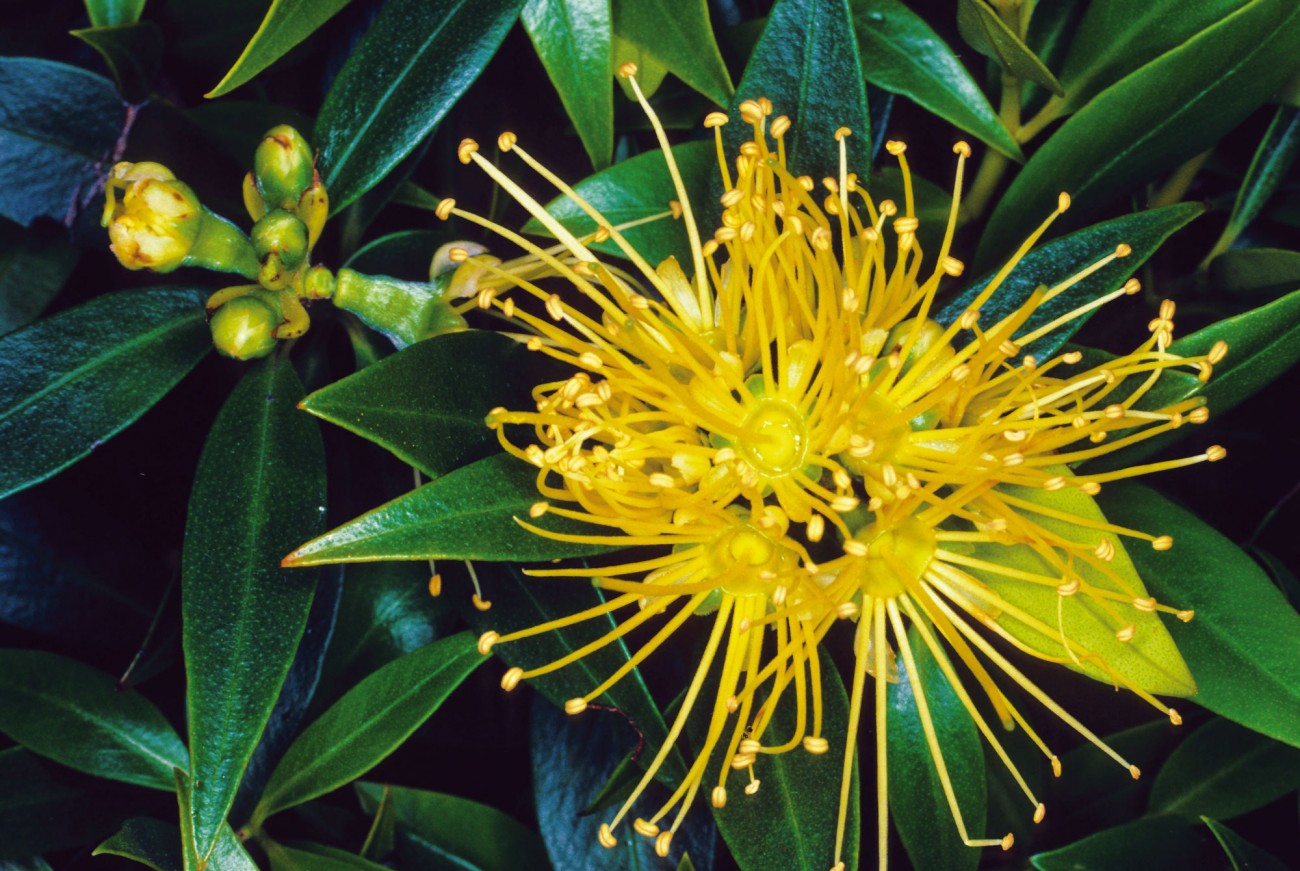 The opposite mechanism, xanthism, is an abnormality resulting in an excessive production of yellow pigment and is particularly common in reptiles and frogs. Pale ‘yellow’ tree geckos [Naultinus elegans] are occasionally found in the wild, particularly around parts of the Rotorua area, but they are far more common, and usually more strongly coloured, in captivity than they are in the wild. Breeders selectively swap and breed these animals among themselves to produce a rich yellow colour [opposite], but such ‘line-breeding’ contributes little to the true conservation of our wild geckos. Tree geckoes are typically leaf green and beautifully camouflaged in the wild, while odd-coloured animals such as this are usually ‘weeded out’ of wild populations by predators such as hawks and kingfishers. Overseas, an insatiable demand has developed for odd-coloured designer reptiles that can be line-bred for financial reward. Foreign reptile dealers interested in our geckos maintain they are helping conservation, but the truth is that the hunger for new designer reptiles is placing many rare and localised populations of wild reptiles at risk. 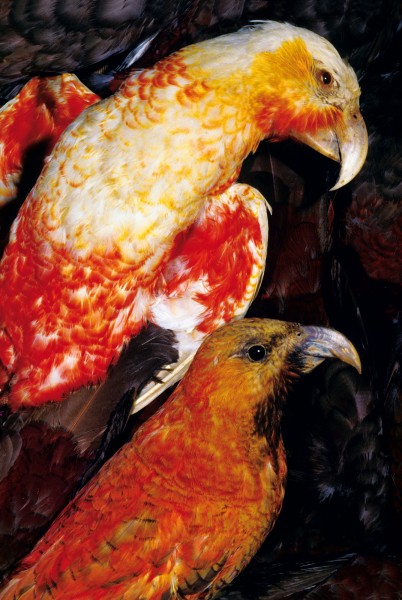 The Chatham Island forget-me-not (Myosotidium hortensia), above, is one of our showiest megaherbs. The pink-flowered seedling is from a typically blue-flowered parent and although unusual, many gardeners would find it an attractive abnormality. However, the pink-flowered mutation is unable to reproduce naturally and doesn’t set seed, perhaps a second abnormality of the mutation or indicative of a failure of pink flowers to attract suitable pollinators.

Native short-horned grasshoppers (Sigaus australis) are typically green, grey or brown, but on occasion an abnormally coloured pink or red grasshopper survives in an otherwise normal population. This mutation is termed erythrism and is responsible for the excessive production and deposition of red pigment. Diet, too, can cause some grasshoppers to change colour. Young green katydids (Caedicia simplex) will turn pink when feeding on the dark-red leaves of ake-ake; however, adult katydids always revert to their typical green colour. 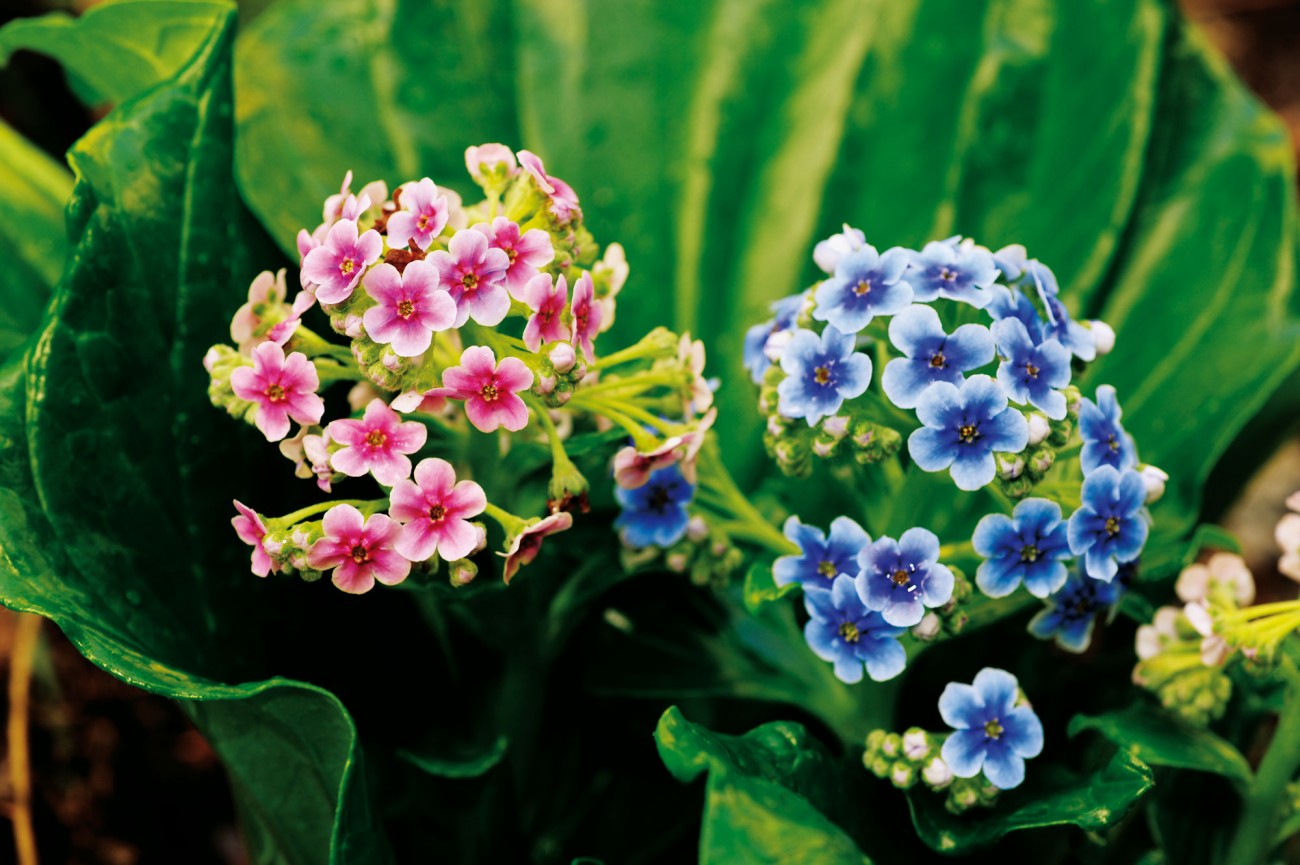 In Victorian times, colourful mutations of New Zealand’s kaka (Nestor meridionalis) were collected, including the white morph opposite, and an example of a red morph or kaka kura below it. Both are unusual—a kaka’s normal colours are a relatively drab mix of dark greens and browns, with a little red under the wings. The drab plumage of kaka (as seen in the background in this photo) was probably an advantage in forests in pre-human times when winged predators hunted them. But the arrival of humans brought an end to these ancient predators and perhaps partially eased the evolutionary pressure on kaka to be so mundane in coloration, as several different-coloured morphs of kaka began to become established around the country. However, the opportunity for bright colours was short-lived. The Victorian era itself brought new pressures: at the same time as mammalian predators such as stoats and weasels entered the country, collectors such as Walter Buller were targeting any native parrot exhibiting unusual plumage. As a result, these beautiful colour variations can be found only in museums today.