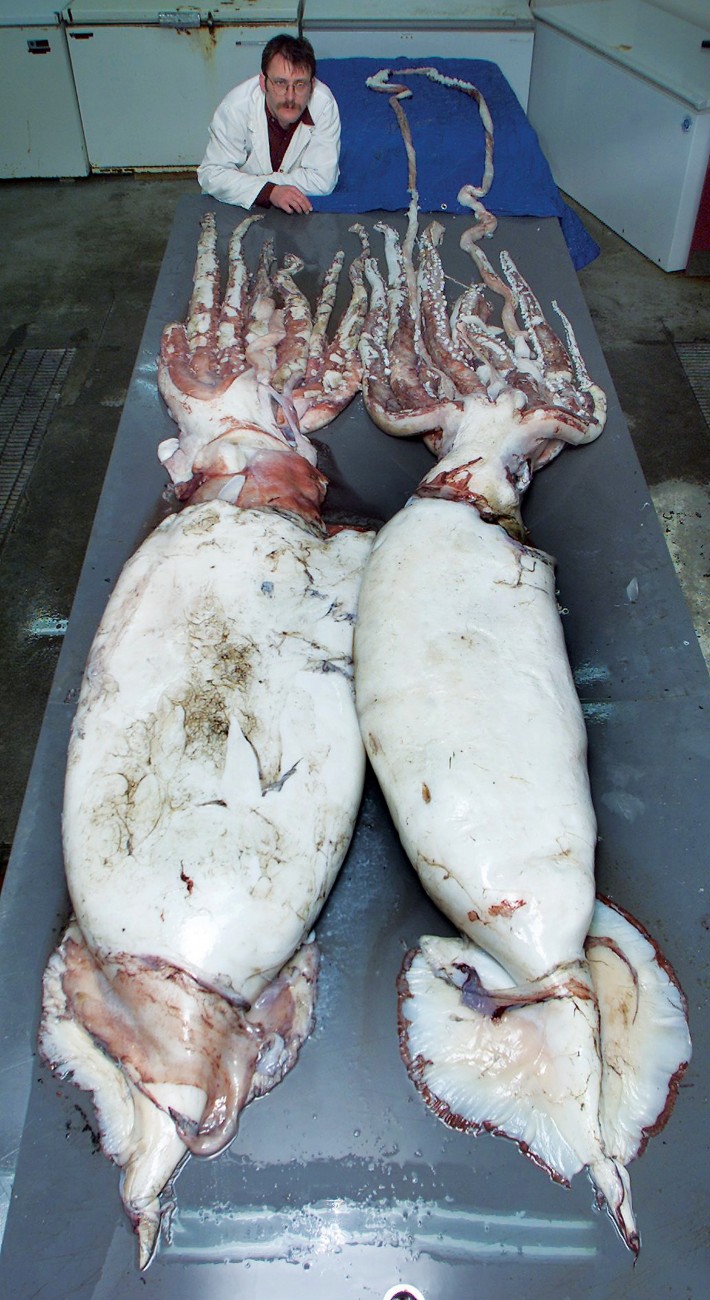 It is the middle of January and Steve O’Shea, commonly referred to as the “squid man”, apologizes for the state of his scalp. Having shaved it bald recently, it’s now peeling away in large pink patches. He’s spent a weekend under the blistering sun on the beach at Hikurangi, Northland, carving up a sperm whale that stranded there. He’d gone specifically to find out what the thing had been eating.

O’Shea darts out of the room and returns with two large jars in which float the remains of whale supper. Along with his students, O’Shea has been studying the stomach contents of whales and other cetaceans for several years now and every­thing is pointing to a radical shift in the oceanic food-chain­ but hard evidence is still needed.

The stomach contents of sperm whales help him to build his case. No data on New Zealand whale diet has been col­lected since 1960s. Back then, according to those records, more than a third of a whale’s diet was commercial fish. “But now there aren’t any fish left so they’ve switched to squid,” says O’Shea.

The problem, he argues, is that now there isn’t enough squid either. He grabs a pair of tweezers and pulls out a squid beak; it looks like the beak of a parrot, only larger, darker and consid­erably sharper. “A fully mature whale should have upwards of 1600 beaks in its stomach,” he says. “Now we’re finding none to 300 beaks…the stomachs are empty and the beaks we’re finding are largely from Antarctic species.”

Squid populations are either being directly depleted by commercial fishing or, less directly, by trawling methods that are wrecking their breeding patterns. “These squid have ge­latinous egg masses. If we’ve got 250,000 trawls a year, how many of those egg masses are being destroyed? All is not well in cephalopod world.”

Hence, he is increasingly certain that there are a lot of hun­gry cetaceans out there. He is simply finding too many empty stomachs. “It would be dangerous to say they are starving,” he says. “But an empty stomach is any empty stomach.”

O’Shea is the director of the Earth and Oceanic Sciences Research Institute (EOS) at the Auckland University of Tech­nology, where research topics range from turtles, sharks and frogs to cephalopod systematics. A few years ago, the institute was made up of O’Shea and a couple of students. When NZ Geographic visited this year it had moved into new premises to accommodate its rapidly expanding population, which now includes seven staff and 34 students. “It’s out of control,” says O’Shea. “But we do some sexy science here.”

O’Shea is the nearest thing this country has to a celebrity scientist, having been the subject of magazine profiles and sev­eral documentaries, both here and overseas. He is the man the media turns to when­ever someone lands a giant cephalopod. You can see why. O’Shea knows his squid intimately, having preserved more than 100 of them. He is also eminently quotable. When he described his next project, a colossal squid, as having “calamari rings the size of tractor tyres” and “eyes like dinner plates”, the analogies were repeated in media reports all over the world.

He also wears his heart on his sleeve, which is ideal for any documentary maker looking for a hero. In 2001—much to his embarrassment and the delight of the cameraman—he wept when he discovered that the paralarvae (baby giant squid) that he had finally managed to find after three weeks at sea had all died before they reached the shore. “There they were. Little lumps of snot at the bottom of the tank. Peter [the documentary maker] says, ‘How do you feel?’ and I burst into tears. Of course this is the shot they use, and the whole damn world uses it.”

At the time of this interview, O’Shea was steeling himself to preserve the biggest squid of all; the 495 kg colossal squid hauled out of the Ross Sea on February 22, 2007, by far the heaviest squid ever captured and ap­parently 10 m long. O’Shea plans to start defrosting it in the second half of April, so that it will be ready to be dis­played at Te Papa later this year. He has done this sort of thing dozens of times and he can make it sound easy; the squid is slowly defrosted under a continuous jet of cold water, injected with several litres of formalin, soaked in a formalin bath for several weeks, drained, wrapped in cheesecloth, packed into a tuna bin and posted off to its destination.

However, the prospect of preserving this particular squid, he says, is particularly unnerving. First of all, the squid is 200 kg heavier than any other squid he’s had to deal with. And, being the largest colossal squid ever captured, the world will be watching.

The trick will be to defrost the squid—currently fro­zen into a 1.2 m cube—so that he doesn’t end up with the exterior parts of the animal defrosted and decompos­ing, while the insides are still ice. Hence, he plans to sub­merge the entire block in chilled brine, hold it at 1°C (the freezing point of salt water is 2°C lower than fresh wa­ter) and increase the temperature over a period of days, probably 1°C a day. Or maybe 1°C every two days. Or maybe 2°C every day. “Depending on what happens,” says O’Shea, “we’ll be making it up as we go along.”

“I don’t know if a week is going to be enough. I’ll be panicking. Cameras will be everywhere. There’ll prob­ably be a webcam on this. Honestly, if we make a stuff up we’re going to be criticised internationally.”

What is the worst-case scenario? A repeat of the time that he tried to catch a giant squid from beneath as it slid off the bench and onto the floor, only to have it burst on top of him? Even if that happened it would make excellent telly. And you can’t imagine it would do much to curb O’Shea’s instinct for adventure, at least not for long.

“When I last came out and said, these animals grow up to 500 kg, everyone just laughed. So I think it’s marvellous that we got an animal this size. They probably get even heavier. We don’t even know what sex this one is. Generally the females are bigger and heavier, so if this proves to be a male—as the fishermen maintain— we’ve got a considerably larger female out there. And then I’m going to make this wild statement, like ‘this animal gets up to a tonne!’ And everyone is going to laugh. But you know, you’ve got to have fun.”