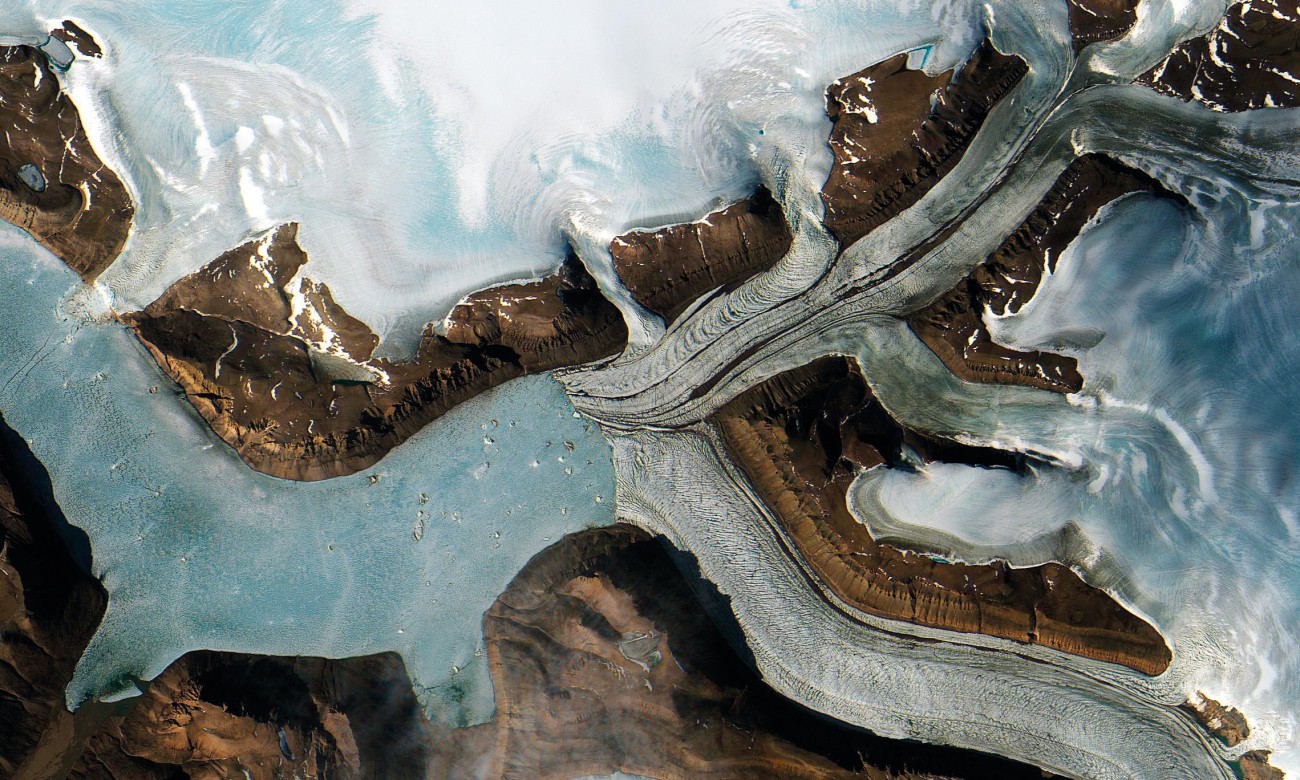 Glaciers around the world are melting as the atmosphere warms. As the meltwater runs to the sea, the weight of ice pressing down on the land decreases and the land rises. Known as ‘glacial isostatic adjustment’, the rise is caused by an elastic rebound of the Earth’s crust and upper mantel, or lithosphere.

A study by the University of Arizona’s Kathleen Compton and colleagues published in Geophysical Research Letters in February found uplift in excess of three centimetres per year in the Central Highlands region of Iceland. Global Positioning System (GPS) measurements also showed the rate of uplift accelerating between one and two millimetres per year. Greenland is also rising several centimetres each year in places, with the rate accelerating at up to 3.6 millimetres per year near Jakobshavn Isbrae Glacier in the west of the country.

Of concern to volcanologists in Iceland is the possibility that reducing the pressure underneath the glacier may lead to an increase in volcanic activity. Below the lithosphere lies the asthenosphere, which is partly molten and partly solid. The high pressure caused by the weight of the Earth above this layer keeps most of the asthenosphere solid; lower the pressure and more will become liquid and rise towards the surface.

During the height of the last Ice Age, some 20,000 years ago, a kilometre-thick ice sheet covered Iceland. When this melted, there was a dramatic increase in volcanic activity. Each eruption left distinctive traces in the annual ice layers laid down on the Greenland Ice Sheet, which can be identified and dated from core samples.

These measurements show that when the ice sheet was melting quickly—around 12,000 years ago— the level of volcanic activity increased 30 to 50 times above the background rate, and continued for 1500 years.

Iceland’s volcanoes have made their presence felt in recent times. The eruption of Eyjafjallajökull in 2010 disrupted air travel in Europe for a week at an estimated cost of almost US$3 billion. In 1783, the eruption of Grimsvötn was far more devastating. Lava flowed from a 27-kilometre-long fissure for six months, eventually covering 600 square kilometres. Hydrogen fluoride and other poisonous gases polluted water supplies, killing three-quarters of the sheep and half the cattle and horses. Poisoning and the resulting three-year famine took a quarter of Iceland’s human population.

Once the ice has gone, land uplift can continue for thousands of years as the viscoelastic response of the asthenosphere causes a slow migration of magma sideways to where the ice sheet used to be. Scotland, for example, is still rising about one millimetre each year, while northern Scandinavia is rising 10 times faster. Parts of Scandinavia have risen 300 metres since its ice sheet melted thousands of years ago. Meanwhile, the Earth’s crust immediately adjacent to the vanished ice sheet has been sinking.

Geologists believe these changes have contributed to earthquakes, particularly tremors away from the boundaries of tectonic plates.

Excavations on historic fault-lines in Scandinavia show movements consistent with earthquakes as strong as magnitude 8 in the time just after ice melt.

Such an earthquake is thought to have triggered a massive tsunami that affected the margins of the North Sea 8000 years ago.

Mapping of the floor of the North Sea by oil companies has revealed massive underwater debris flows at the edge of the continental shelf west of Norway. Known as the Storegga slides, the volume of material that collapsed into the deep ocean abyss has been estimated at more than 3000 cubic kilometres.

Tsunami deposits indicate that the wave generated was 20 metres high in parts of Scotland and Norway and less on the east coast of England. Also hard-hit would have been Doggerland, the now-submerged land- bridge between England and Holland. The lagoons and marshes of coastal areas would have been rich sources of fish and birds for Mesolithic people, who must have suffered high casualties in the event.

While probably started by an earthquake, the slide was likely helped on its way by an eruption of methane hydrate, formed when organic matter, buried in the sediments, decays in the absence of oxygen. The methane produced is trapped inside a cage of frozen water, which is unstable if the temperature rises or pressure decreases. When sediment slides away, the pressure on layers underneath reduces, and each cubic metre of buried hydrate expands explosively into 164 cubic metres of gas.

A detailed and chilling exploration of the links between vanishing ice sheets, volcanoes, earthquakes and tsunamis can be found in Waking the Giant by Bill McGuire, professor of geophysical and climate hazards at University College London.

Linking all these phenomena is the force of gravity, which also has a paradoxical role to play in redistributing meltwater around the world’s oceans. The giant ice sheets, many kilometres thick, exert a gravitational attraction on the oceans around them, lifting the level of the adjacent sea many metres above what it would otherwise be.

Once the ice sheet melts away, the gravitational force ceases and the sea is released to flow to tropical latitudes and even to the opposite hemisphere.

Studies published by Harvard geophysicist Jerry Mitrovica and colleagues in a number of journals over the past decade have indicated that sea level could rise by an extra 25 per cent above global average in locations such as the eastern seaboard of the United States, while actually falling within 2000 kilometres of the melting ice sheets.

Current thinking is that melting parts of the Greenland and Antarctic ice sheets may push global average sea levels up about a metre by the end of this century, but that New Zealand would get only an extra 10 centimetres because of the decrease in gravitational attraction by reduced ice sheets.

How many extra eruptions, earthquakes and tsunamis we get remains to be seen.