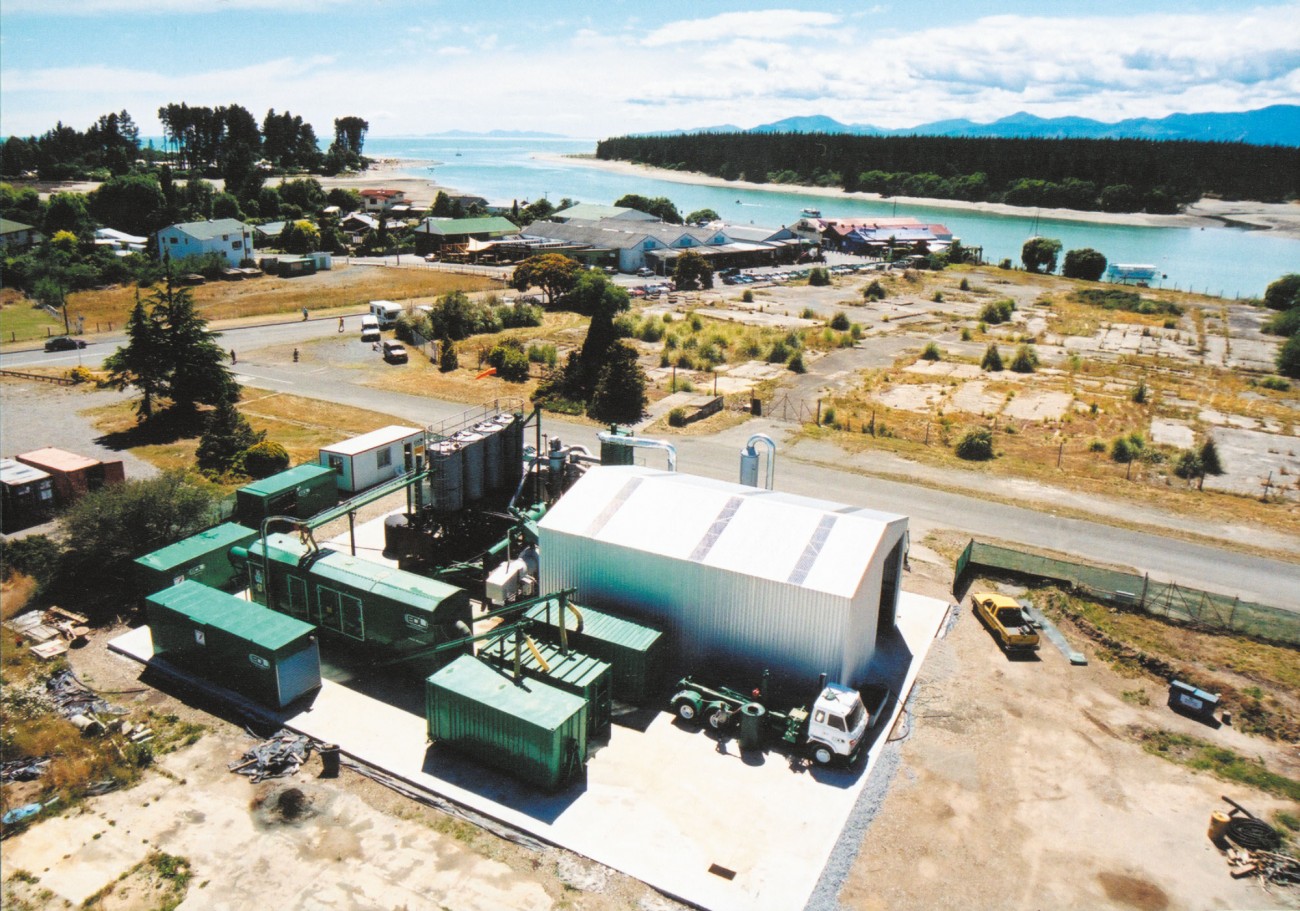 In among the classy new cafes and scenic waterfront sections along the Waimea Inlet at Mapua, west of Nel­son, is an innocuous-looking area of wasteland sitting behind a high wire mesh fence. Mottled with patchy scrub and toetoe, and dotted with small heaps of soil and rubble, all it seemingly needs is a tidy-up from a few bulldozers and it could be the start of a new subdivision.

Except this sad and barren land is a highly toxic waste area laced with agricultural poisons strong enough to kill the hardiest plague of insects. Lying empty and abandoned since 1988 when the Fruitgrowers Chemi­cal Company (FCC) finally closed after 56 years of manufacturing a cocktail of toxic agricultural chemi­cals and pesticides, the site has sat unused and unusable.

Testing was carried out in the early 1990s to determine the extent of contamination in the area, includ­ing on the adjacent foreshore. A seri­ous degree of organochlorine, heavy metal and sulphur contamination was found in the ground, in nearby marine sediments and, to a lesser ex­tent, on neighbouring properties. It is considered the site most polluted by pesticide chemicals in the country.

Back in the heyday of Nelson’s buoyant apple growing years, the FCC factory was in an ideal situ­ation. Dozens of chemicals were manufactured and the soil still con­tains unhealthy concentrations of the organochloride insecticides DDT, DDE, DDD, dieldrin and aldrin. In the 1960s, when these chemicals’ toxicity and resistance to breakdown in the environment were discovered, their use was discontinued. Yet by then they were well established in the food chain, accumulating even in humans through the consumption of fish, birds, shellfish and the very fruits the sprays were used on.

The difficulty of how to deal with the FCC site has been hanging heavily over the Mapua community and the Tasman District Council (TDC) for many years now. With the demise of the FCC company, responsibility for the clean-up was taken on jointly by TDC and the Ministry for the Environ­ment. Neither, however, accept any liability for the contamination itself. In 1996 TDC gained ownership of the 3.42 hectare site to avoid legal complications that may arise from combined ownership during the clean up. An adjacent 1.6 hectares of neighbouring waterways and seabed will also be treated. Clay has been used to cover and seal some parts of the site to reduce discharge of contaminated run-off, but the idea of sealing the whole site with clay has been rejected as it would limit future use of the potentially valuable block to parkland.

After eight years of investigation and deliberation, a decision has been made recently to use a newly-developed mechano-chemical dehalogenation (MCD) process for the site decontamination. This proc­ess involves cleaning and treating the contaminated soil and sediment on-site, to a point where it reaches ac­ceptable standards for the land-use options expected by the community. In this case, with its prime seaside situation, TDC and the Mapua com­munity hope the land can be made suitable for a mix of residential and commercial property with the fringes set aside as coastal reserve.

How does MCD work? Precise details seem to be secret, but general principles are known. Mechanical energy—provided by a ball mill—breaks down all particles of soil into very fine material, increasing the surface area for chemical reactions and bringing newly-exposed reactive faces into intimate contact. At the collision point of the ball bearings, a localised triboplasma forms, provid­ing energy for chemical reactions to occur.

In the 1990s, researchers at the University of Western Australia found that 12 hours of ball mill treat­ment in the presence of calcium ox­ide destroyed all organic materials, including DDT. Much of the chlo­rine reacted with calcium to form calcium chloride. More generally, it seems that when base metals like alkali and alkaline-earth metals (but also aluminum, zinc and iron) are mixed with certain hydrogen donors (like alcohols, ethers, hydroxides, hydrides) in a ball mill containing contaminated materials, then even very stable toxins such as PCBs are converted to harmless products. It matters not whether the pollutant is present at high or low concentration. Before the discovery of the omnipo­tence of the ball mill, deactivation or removal of soil-bound pollutants had been problematic. The unwanted chemicals bound very tightly to soil particles where they seemed inac­cessible to many normal chemical reactions.

At the Mapua site, Auckland firm Environmental Decontamina­tion Ltd is providing the new on-site MCD treatment technology. With resource consents now granted, the initial estimated cost is $6.5 mil­lion, though this depends on just how much contaminated soil needs treating once it is dug up. TDC has pledged $2 million towards this cost, and the government will provide the remainder from its Contaminated Sites Remediation Fund and manage the final stage of the contract works.

Proof of performance testing of the MCD technology has just been completed on the site, and the full-scale excavation and treatment work is expected to take around 18 months to complete. Only then will the locals be able to breathe easy and enjoy an area that has been seriously contaminated for the last 70 years. Mapua has the distinction of being one of the first large-scale trials of this approach to decontami­nation anywhere in the world, and as such is attracting considerable international interest.