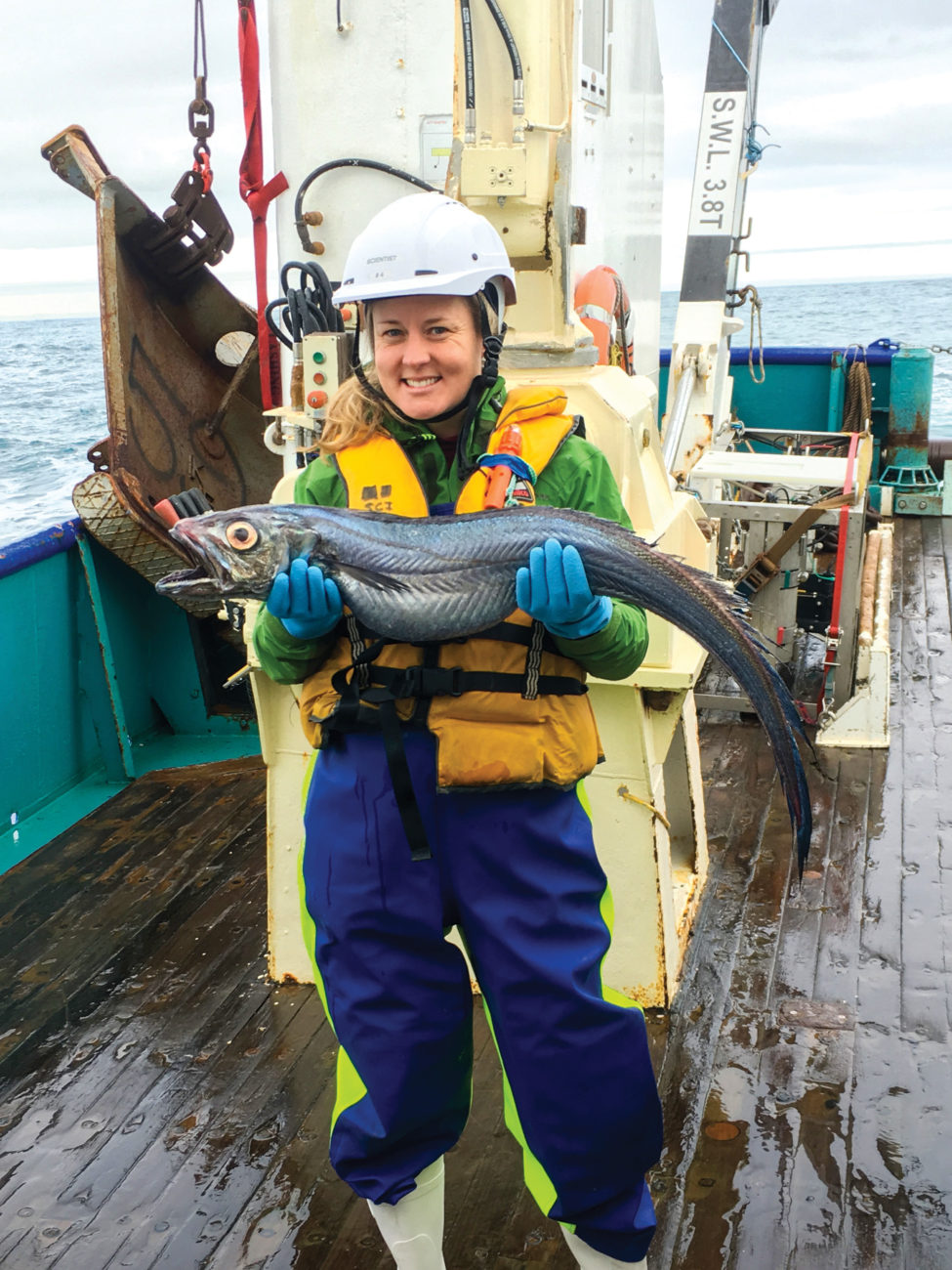 Kate Evans was sleeping on a mattress in the cabin of the Carolyn Marie when, about four o’clock in the morning, as the skipper motored into rougher water, the boat pitched and she was thrown into the air. She landed on the floor.

“That was how the fishing day started,” she says. “It was pretty bad weather.”

Evans isn’t a fisher herself, but she grew up around them. She was at preschool with Adam Kellian, one of the fishers in the story, when the quota management system (QMS) was introduced.

Understanding how the QMS functions, its advantages and limitations, took her from longlining with Kellian on the Carolyn Marie to joining the NIWA research vessel, the Kaharoa, to see first-hand how fisheries science is conducted. Holding a hoki, she realised she’d never seen one whole before.

“I’d never even thought about what they looked like, but as a deepwater fish, they’re super weird-looking, definitely punky-looking.”

Though she suspected that the polarised debate over the fishing industry would turn out to be a poor reflection of reality, the extent of it surprised her.

“You get one version of things from non-profits and almost the complete opposite from the corporate industry. What became clear as soon as I started talking to individual fishers was that the independent fishers’ experience on the water is quite different from the fishing industry’s voice that gets heard.

It’s difficult to critique the QMS meaningfully because it’s so large, she says. “Very few people have an actual overview of the whole thing, everybody sees their part of it and the problems with their part of it, but it’s sort of become so big that it’s quite hard to see outside of it.”

During her year working on the story, she found that friends and family would constantly ask her for advice on which fish to eat. She still isn’t sure how to respond.

“I say it depends on what you care about. I feel like hoki are least likely to collapse, because they’re the most researched and monitored, but if you’re worried about bottom-trawling and the benthic structures on the bottom of the sea—not so great. Snapper is at fairly low levels of its historic biomass but there’s a lot of it, and I saw that out with Adam—it’s naturally abundant, and the quota system is doing its job there, where the quota is very much acting as a cap on what is caught. But then if you’re choosing gurnard then the independent fisherman is getting a lot more of the profit, but we don’t know as much about the sustainability of gurnard.

“I do think it’s probably better to buy line-caught fish.”

Perhaps, she says, the most significant problem with the whole system is that we just don’t know very much about many fish.

“I think if we care about New Zealand’s fish, we should support the government to fund fisheries research at a high level. It’s still not going to enable us to research all of the species that are out there, but it would be great if we could do more than is currently being done.”