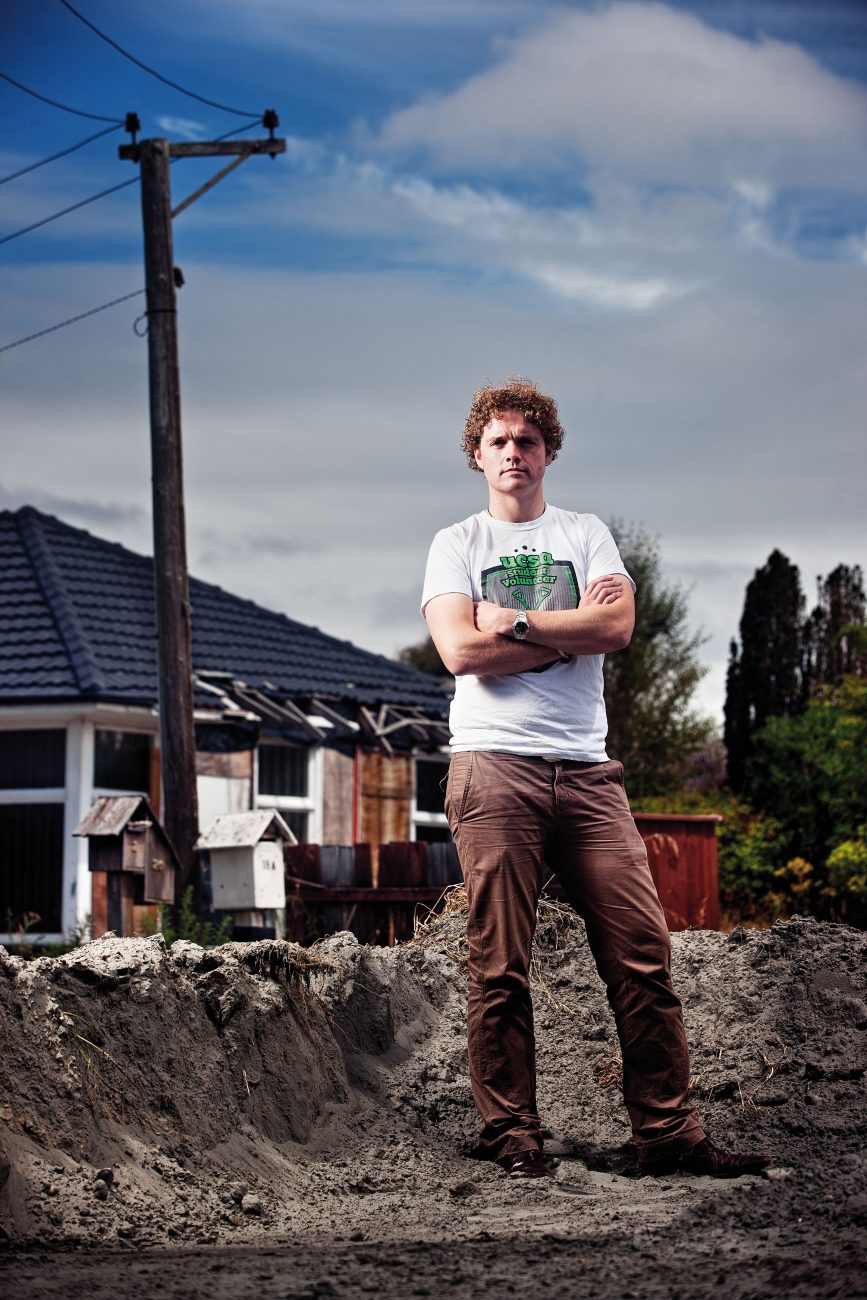 Just hours after the September 2010 earthquake, University of Canterbury student Sam Johnson put out a Facebook plea for volunteers to help clean up the silted streets. The following day, his offer of assistance to the Civil Defence call centre was put on hold for 30 minutes before being met with the unequivocal message, “Just stay at home”.

“I was shocked that they couldn’t deal with spontaneous volunteers,” he says. “There was no avenue to volunteer through.”

With the eventual consent of a city coun­cillor, Johnson posted a meeting point in the suburb of Halswell. Expecting a group of 20 or 30, he arrived to find 150 people armed with shovels and gumboots. And the carloads kept coming. The Student Volunteer Base for Earthquake Clean Up—soon to morph into the headline-grabbing Student Volunteer Army—was born.

Since then, the SVA has used Facebook and the online mobile management system GeoOP to mobilise thousands of students to clear some 360,000 tonnes of silt and sludge from liquefaction. As well as providing manual labour (Johnson still keeps a shovel in his car), SVA volunteers have delivered hot meals, water, information and much-needed comfort to distressed residents.

Johnson was at an emergency manage­ment conference in Wellington when the devastating February 22 earthquake struck. On the first day of SVA action, as aftershocks continued to rattle the city, 1000 people turned up to help.

“We were tired, we were scared, but we really wanted to make this happen,” he remembers.

“A lot of people wanted to help, but having a platform for volunteering was essential. We didn’t try and invent anything. We use the tools we already had—Google Maps, Facebook, Twitter—and we rely on people helping out where they can. It’s not a business with water-tight management structures; we’re a digital generation—we like instant gratification, we don’t like long-term commit­ment and we decide on a whim if we want to do something or not. So you can never plan what’s going to happen 24 hours in advance and you never have a clue whether you’ll get two people or a thousand. That propensity to expect the unexpected has increased, but it gets to a point when it’s exhausting.”

At 23, Johnson’s no stranger to initiative. Raised on a farm in rural Canterbury, he was head of music, drama and house at Christ’s College. At university, he was cultural captain at College House and treasurer of the University Musical Theatre Society. In 2010, he won a seat on the Riccarton-Wigram Community Board. He’s been awarded a Sir Peter Blake Trust Special Leadership Award, talked about the SVA with US Secretary of State Hillary Clinton and Prince William and been shortlisted for 2012 Young New Zealander of the Year.

Between semesters, the SVA continues to demand long hours and frequent travel. In April, Johnson and SVA colleague Jason Pemberton travelled to Japan to help estab­lish a version of the Student Volunteer Army following the previous month’s disastrous earthquake and tsunami. Seven months later, the pair presented workshops at the World Summit for Youth Volunteering in Colombia, spending a week in San Francisco with Art Agnos, Mayor of San Francisco during its massive 1989 earthquake.

“It was the most remarkable five days of my life,” Johnson says. “His experience leading the recovery, his vision, his outlook—it kindled my interest in politics, in world affairs.”

“I’ve always been interested in politics but we’re in this for Christchurch. If standing for council in the next election is going to be a positive step for Christchurch then I might consider it, but there are other things I want to see happen.”

Already the SVA has launched a scholar­ship fund for those who lost a parent or caregiver in the February earthquake and a Volunteer Army Foundation trust to build a stronger framework for volunteer disaster management and a culture of youth volunteering.

“We’re privileged to have a culture where people want to give but there’s a disconnect. My generation doesn’t have a stake in the future, they don’t feel involved or they don’t care enough. So people will leave and they won’t have any real reason to come back. We need to build that emotional bridge—that’s what the volunteer army started to do. They need to feel that they have contributed, that they’ve left a part of them­selves in the city, so they have something to come back to.

“It’s not just about silt or chemical toilets—it’s about being organic, being crea­tive, taking risks and not worrying so much about planning everything out in your life. Students can use that creative licence in a positive way, instead of just burning couches.”