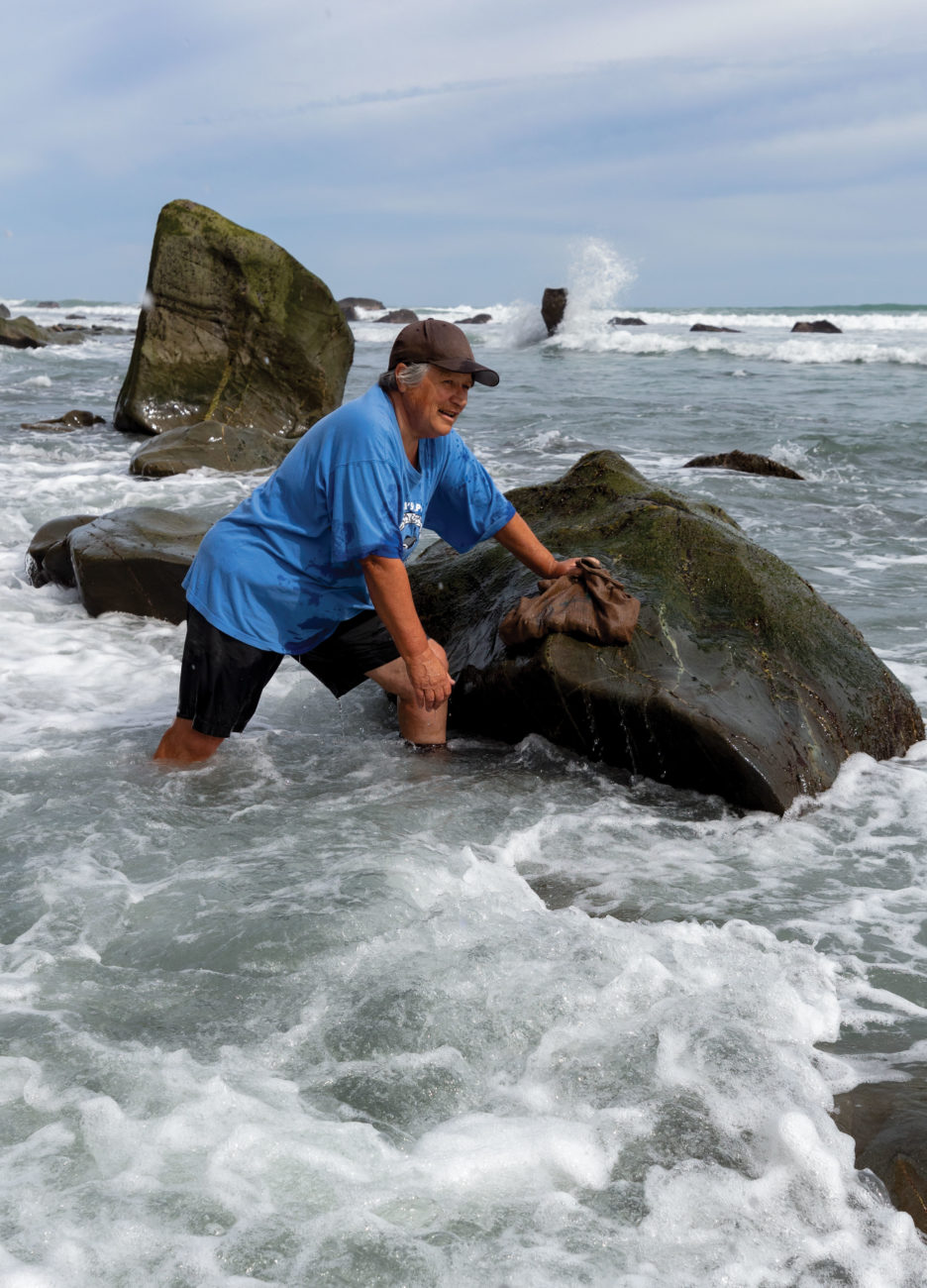 When I call Ramari Oliphant Stewart, she’s busy nailing down a new roof ahead of a cyclone that threatens to lash the West Coast.

She built the house herself, here in the teeth of the Tasman Sea on a remote stretch of the Coast. “I got a job down here,” she tells me, “working in the bush as a science technician, and I never left. The environment I came from was disappearing and it was getting harder to find a place that wasn’t overpopulated.”

Ramari, whose tribal affiliations are Ngāti Awa, Rongomaiwahine and Ngāti Mahuta, grew up at Port Ohope in the Mataatua region in Bay of Plenty. “I think I was 11 when we got our first vehicle,” she says. “We used horses before that. We grew our own crops, but we were semi hunter-gatherer.”

From a young age, Ramari was tutored by her elders in mātauranga Māori (traditional knowledge of the natural world). “It’s about developing your senses, and your ability to perceive your environment and survive in it,” she says. “But most importantly, your ability to be part of that environment, not separate from it. It promoted in me a profound sense of kinship with the environment. I regard all life as my tuakana, my elders.”

In the Māori world view, whales are seen as relatives or ancestors. Humpback whales were the guides that led early Polynesian explorers to Aotearoa. At 10, Ramari became recognised as a whale rider—a person with a special kinship to these creatures. As a young woman, this connection led her to the Cook Islands in search of migrating humpbacks. She found them largely absent, their numbers heavily depleted by commercial whaling.

In the late 1970s, she heard of a group of common dolphins regularly associating with a trawl fishery off Whakatāne, and wanted to learn more about them. To do so required a boat, so she built one—a catamaran inspired by the double-hulled waka she had seen on her travels through the Pacific. Once on the water, Ramari was able to apply the knowledge she’d gained since her childhood. “When you sail around with a group of animals every day, and they come and meet you every morning, you know you are fully integrated into the group.”

Working from a base on Moutohora/Whale Island, Ramari spent three and a half years studying the dolphins, one of the the first longterm studies of a cetacean population in New Zealand. “I guess you could say, I was a bit like Jane Goodall living with the apes.”

After learning that southern right whales wintered in the subantarctic at Campbell Island, Ramari, who was also a registered nurse, found a way to get there in 1983, through a job as a technician, cook and medic with the Meteorological Service.

“In those days, women didn’t go to remote places with a dozen men for 12 months,” she says. “It was quite hard to convince the interview panel. But I did.”

Her paid work on Campbell Island kept her from her true goals of studying the whales, and so Ramari returned in the mid-1990s, leading three scientific expeditions based at North West Bay.

“I didn’t know much about how to put a scientific paper together,” she says. “But I managed. I didn’t even have a computer, so I drove to Christchurch and bought one, and then found someone with the necessary computer skills to come and stay with me long enough to pump out the manuscript.”

Until recently, that paper was the only published work on the whales of Campbell Island.

Ramari’s career and life has always been defined by an ongoing struggle to move freely between worlds—the indigenous role she was born into of kaitiakitanga (guardianship), and the world of Western science, which is only now beginning to take indigenous knowledge seriously. “So much of my former data never got published,” she says. “I wasn’t recognised because I wasn’t going through an academic process.

“Kaitiakitanga, and the mātauranga Māori that’s associated with it, requires research, making connections and asking questions. Our ancestors had to do it all
the time.

Much of Ramari’s life’s work has involved keeping alive traditional knowledge, including rongoā (medicine), and the recovery and use of dead, stranded whales. She has spent decades honing these skills—undertaking the task of preparing whale bones for exhibition or research in the national collection, or for Māori customary use throughout the country.

“Besides helping Māori to recover a resource,” she says, “the main thing is to try and restore some of our traditions with the whales.”

In this mahi, Ramari’s early learning has stood her in good stead. “What that experience gave me was the confidence to make decisions, sometimes very quickly. Whales often strand in very difficult coastal settings, and during adverse weather conditions.”

Among her most impressive achievements have been leading the arduous customary recovery and preparation of a family of nine orca which stranded in Te Waewae Bay in 2014, and then, later that year, of 40 pilot whales at Ohiwa Harbour.

“Both collections are very special,” she says. “Because they are in the care of the community, and we’ve confirmed that the orca collection is the only skeletal representation of an orca family in the world.”

As they have since she was a little girl, the whales continue to lead her.