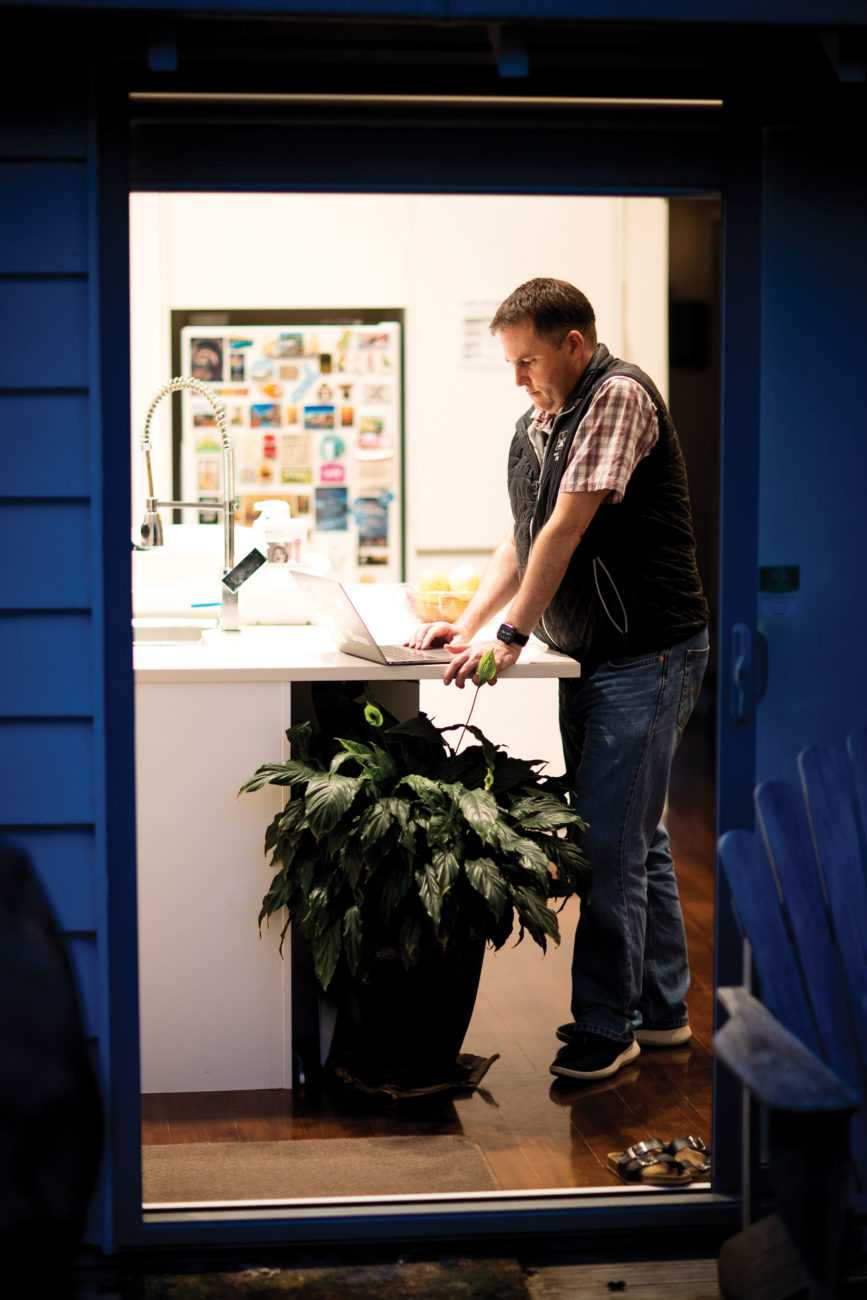 One Saturday at the beginning of March, Shaun Hendy sat down to model the spread of COVID-19 in New Zealand. He was wondering whether he should cancel an upcoming meeting of staff from Te Pūnaha Matatini, the national research centre he directs. He made a rough model, applying data from Italy and China to New Zealand. The numbers it spat out scared him—all the possible deaths. What he did next was the science equivalent of pushing a panic button.

He assembled a team of expert modellers and got to work (from his Grey Lynn home, at the kitchen table) and began passing the findings on to the government. The team’s initial modelling predicted that the virus could kill up to 80,000 New Zealanders if left unchecked. Now, Hendy’s been asked by the government to keep developing the model. He’s off the hook from teaching his usual university classes over Zoom.

Pandemic modelling is a long way from where Hendy started out in science, studying gravitational waves and black holes. At Te Pūnaha Matatini, he still works on questions of physics, such as how liquids behave at the nano-scale, but he also applies the same mathematical and computer modelling tools to social and economic problems.

He believes that communicating science is as important as the research itself, and he’s increasingly drawn to what one of his colleagues describes as “performance science”. Like performance art, this involves being a living example of the things he’s passionate about.

One of those things is climate change, something he’s been interested in since his 1982 school science-fair project on ‘Carbon Dioxide and Global Climate’. He was 11.

Didn’t he think about becoming a climate scientist? “I kind of thought it would be a solved problem by the time I was a grown-up doing science,” he says.

In 2017, he clocked up 84,000 kilometres on planes and realised he was part of the problem. When the idea of avoiding flying for an entire year came to him, he mentioned it to a couple of colleagues. “I knew that if I said it out loud it would become a thing.”

It did. He spent 2018 refusing invitations to international conferences and riding trains and buses around New Zealand. That experience became a book, #NoFly.

He’s flying again, but only in moderation—mainly for the purposes of visiting his wife’s family in Canada. Each year, he gives himself a carbon cap, aiming to ratchet it down as low as possible while still doing his job. “Actually, it turns out that this year is going to be real easy.”

Another idea that he embodies is that of kindness in science—and by that he doesn’t mean niceness. Kindness still involves confronting bad behaviour and critiquing each other’s work. But it’s also about inclusion, and acknowledging your own biases and privileges.

“We’ve had this very individualistic scientific culture, based around these hero scientists, generally all white men, and they’re characterised as geniuses working in isolation—and that paints a very misleading picture about how science works,” he says.

His resistance to that hero culture explains why it’s quite hard to get him to speak about himself rather than his team. As we talk, Hendy constantly gives credit to people around him, seemingly without realising it: to University of Canterbury conservation geneticist Tammy Steeves for the concept of kindness in science, to Greta Thunberg for making his #NoFly commitment exponentially more topical, and to microbiologist Siouxsie Wiles for inspiring his 2016 book on censorship and communication, Silencing Science.

He’s noticed for a while that, in life, the deck is stacked against some players. His fourth-form teacher at Palmerston North Boys’ High School told the class that feminists believe that all men are rapists. He saw his mathematician sister, Jo Hendy, face barriers in her career that he has never had to deal with. And he’s watched female colleagues, including Wiles, get slammed for speaking publicly about scientific controversies. “A lot of the culture of speaking out was that you were allowed to speak out in the science community if you were a senior white male.”

As a way of standing against that, Hendy has committed to never appearing on an all-male panel. “I had to overcome the uncomfortableness of telling a bunch of colleagues that they’d just produced a ‘manel’,” he says.

Te Pūnaha Matatini has made it a priority, too, to quantify inequalities and their impacts in New Zealand. It’s one of the biggest issues we face, he believes. “Inequality in this pandemic world will destroy societies.”

Right now, New Zealand is on track to eliminate COVID-19. But what could derail it, he says, are the inequities in our health system.

“The biggest chance of it all going wrong for us now is COVID-19 spreading into a part of our society that doesn’t have good access to healthcare… where we could have a silent outbreak, because people are not going to the doctor when they get sick. That’s a huge risk to New Zealand now.”

Modelling that problem, and trying to get the message across to both the government and the public, will be the focus for him and Te Pūnaha Matatini over the coming weeks. “I really care about New Zealanders,” he says. “And I really want science to contribute to New Zealand in the many different ways it can.”