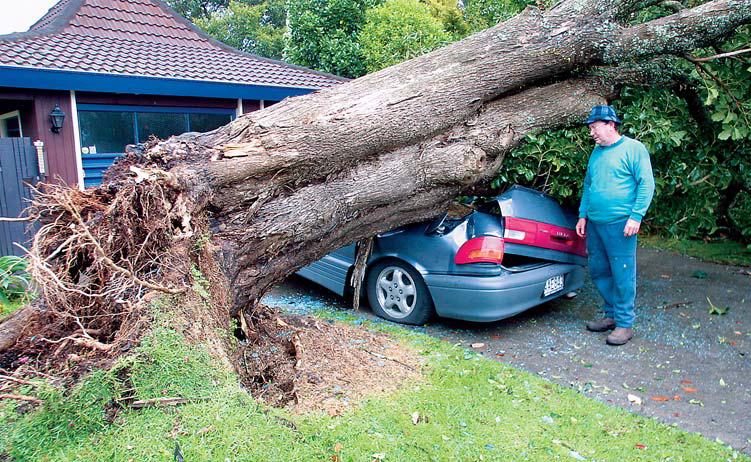 The term “weather bomb,” used in June of this year by forecasters in relation to a rapidly intensi­fying storm that was ap­proaching New Zealand, struck a chord with the media, which trumpeted the warnings so loudly that few people would have missed the message that there was serious trouble on the way.

When it hit, the worst effects of the storm were felt across the northern half of the North Island, especially the Coromandel Peninsula, where up to 270 mm of rain fell in 24 hours in the ranges near Thames. The heavy rain turned the steep streams on the western side of the hills into raging torrents.

One elderly woman lost her life when she was washed into the sea by the flooded Waiomu Stream as it crashed through a campground, uprooting trees and upend­ing caravans. Her husband narrowly avoided the same fate when he managed to cling to a tree until a neighbour, with a rope tied round his waist, struggled through the torrent to rescue him. Another woman was washed out to sea on top of her caravan.

The caravan eventually sank, but the woman managed to reach the shore safely.

Many residents of the nearby Thames Coast settlements of Tapu, Taruru and Te Puru had to abandon their homes when they were invaded by silt-laden floodwaters. Power was cut to thousands of homes, and sewerage and water-supply systems failed in Thames. Around 350 homes suffered damage, and a state of emergency was declared.

A man on Great Barrier Island had a narrow escape when his car stalled as he crossed a flooded culvert. He managed to jump from the vehicle as it was washed away, and watched in amazement as it disappeared in the floodwaters with its tail-lights still on. The next day he found the car 400 m downstream.

Northland also experi­enced considerable flooding, with up to 240 mm of rain falling in some places in 48 hours. The Mangakahia River, north of Dargaville, peaked at 11.5 m above normal—the highest for 15 years—while at Ahipara a flooded stream cut a new route through the sand dunes to the Tasman Sea.

In Whangerei a family fled from their home seconds before a large slip tipped it from its foundations and sent it crashing down a slope on to their car. The Dargaville Fire Brigade had to use a 4WD tanker to rescue a man trapped on the roof of his car.

when it stalled in floodwater on a low point on State Highway 12. Further down the road another man was fortunate to escape with only cuts and grazes when a pine tree crashed across the bonnet of his vehicle.

Easterly gales brought trees down over electricity supply lines, cutting power in many places, while at Maungaturoto the wind fanned a house fire and tore roofing iron from the blazing building, creating an extra hazard for fire fighters.

Meanwhile, in Auckland a man was crushed by a falling tree, and power was cut to thousands of homes. A sky­light blew in at a Takapuna shopping mall, showering about 30 customers seated at a café with glass shards.

A state of emergency was declared in the Waikato, where a silo was blown over, dozens of houses lost their roofs in the high winds and power lines were severed in many places. Flooding in Putaruru forced some residents to evacuate their homes in the dark. A front-end loader was used to rescue one woman and her baby when their home was cut off by floodwaters.

The Bay of Plenty also suffered from the weather bomb, with roofs lifted, windows blown in and power cut to over 20,000 homes by falling trees and flying debris. In Whakatane, the port’s own vessel was sunk. Further south, in Hawkes Bay, there was only minor wind damage, and the moderate rainfall brought a welcome end to a long dry spell.

As the low moved south-east it delivered a parting blow to the upper North Island in the form of a south­west gale, which knocked over more trees, causing further power cuts. A gust of 144 km/h blew 16 containers off a ship in the port of Tauranga, closing the port until they could be retrieved.

The use of the phrase “weather bomb” to describe the storm excited a certain amount of controversy. Some people thought the storm should have been treated as a tropical cyclone. However, it did not exhibit the internal structure or behavior of such an event. Others objected to the word “bomb,” assuming it to be a newly coined, attention-grabbing term more suited to the world of advertising than that of meteorology.

In fact, the term “bomb” has been used in North America for more than 20 years to describe rapidly intensifying lows, some of which have been known to deepen by 60 hPa in 24 hours off the east coast of the United States.

One definition of a bomb is a low that deepens at a rate of 24 hPa in 24 hours at latitude 60°. When adjusted to the latitude of Auckland to allow for effects caused by the curvature of the earth’s surface, this is the equivalent of 17 hPa in 24 hours. The problem with relying on the pressure fall to measure intensifi­cation is that most bombs are moving rapidly poleward, into regions where the background pressure is low. A low that is 10 hPa below the surrounding pressure in the latitude of the North Island may fall by 25 hPa as it moves rapidly south-east yet still end up only 10 hPa lower than the surrounding pressure near Antarctica. Such a low would undergo little change in vorticity—the energy of the air moving around the storm centre.

New Zealand weather scientist Mark Sinclair believes that vorticity is actually a better measure of a storm’s intensity than drop in pressure. He has found that the area just to the east of New Zealand is one of the most active for bombs in the Southern Hemisphere.

Indeed, as I write this, another bomb is moving through this active area, just far enough away to have little effect on our weather except for a day or so of enhanced swell along the coast from Gisborne to Wairarapa.

The list of atmospheric ingredients necessary to cause a low to deepen rapidly—or explosively, as it is sometimes described­ starts with strong upper-level divergence. Wind patterns that cause the air to spread out, or diverge, at altitude act to lower the sea-level pressure by removing air aloft. This typically happens when a fast-moving upper trough interacts with the subtropical jet stream, that ribbon of 200 km/h winds frequently found just north of New Zealand.

The second vital ingredi­ent is surface air with high water-vapour content, as typically occurs in the tropics and subtropics. As this air rises in the developing low it releases massive amounts of heat as the water vapour condenses to form liquid cloud droplets. This heat helps to deepen the low and also to change the upper wind patterns in a way that increases divergence, thereby further deepening the low.

Ten years ago, the computer models used to forecast the weather struggled with bombs. Now they are much better, partly because of better physics in the models, and partly because the computers are more powerful and can work at a much higher resolution. As a result, the June bomb was forecast well in advance of its arrival, and farmers and others could take precautionary measures.

It is interesting to note that all the warm subtropical air brought down to New Zealand latitudes by the storm helped to make this June one of the warmest on record, despite major snow­falls to low levels in parts of the South Island. In fact, the national average mean temperature of 9.8° C was 1.5° C above normal. As they say, it’s an ill wind.