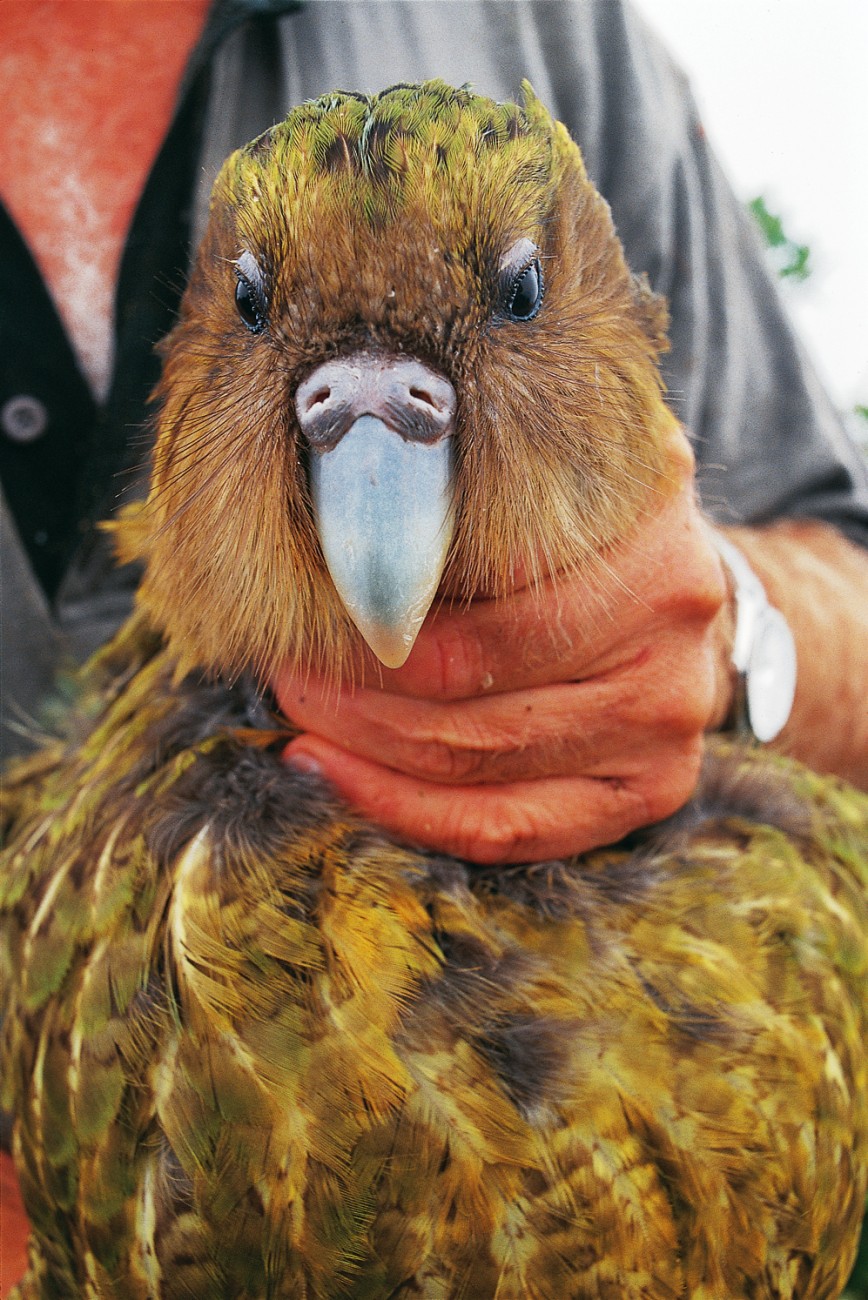 The kakapo—New Zealand’s flightless night parrot and one of the world’s most endangered birds—may at last be facing a more optimistic future.

Hopes are high that a new type of supplementary feeding programme will increase breeding success among the species’ 58 survivors. As part of the programme, the kakapo of Little Barrier Island/ Hauturu are being moved to new homes, most to Maud Island/Te Hoiere in the Marlborough Sounds or Codfish Island/Whenua Hou off the western coast of Stewart Island.

Kakapo came to Little Barrier in 1982, when 22 birds were transferred from Stewart Island, where the wild kakapo population was rapidly succumbing to predation by cats. However, over the next seven years the new population did not breed, and in 1989 supple­mentary feeding was begun in an effort to engender reproductive interest.

Early signs were hopeful: following the introduction of the scheme there was a dramatic increase in the number and frequency of recorded breeding attempts, and in 1991 two male chicks were born. Unfortunately, they were the only chicks to be raised on Little Barrier. The last breeding attempt was in 1995 and resulted in two infertile clutches.

In the light of this breeding hiatus, the Depart­ment of Conservation resolved in early 1998 to shift the 11 known kakapo from Little Barrier to other refuges. It was decided that the island, with its large size and extremely rugged terrain, was not conducive to the highly intensive manage­ment needed to turn round the decline of the species.

Ironically, only months previously there had also been talk of removing the kakapo from Maud Island, where the two resident females had not bred in six years, but the 1998 breeding season saw the most spec­tacular and unexpected success there since the start of the programme.

Eighteen months after they had been transferred to Maud from Little Barrier, where neither had been breeding, two birds known as Flossie and Richard Henry mated, and Flossie laid three eggs, all of which hatched. The three chicks—two males and a female—have since fledged and are doing well. The female is the only one of her sex to have been parent-raised, and only the second to have survived since 1981.

Previously, some birds had been subjected to annual feeding pulses, and some breeding had occurred. For instance, on Little Barrier supplementary feeding seems initially to have triggered breeding, but once it had become an established routine the frequency of breeding decreased. The kakapo recovery team now thinks it should be possible to induce the birds to breed much more frequently by providing pulses of supple­mentary food every 2-3 years, but not feeding them (and thus letting their weights decline) in interven­ing years—so simulating more closely their natural food cycle.

Removal of the birds from Little Barrier will also facilitate kiore eradication, scheduled to be carried out in the next few years. Kiore have been a constant source of concern for the kakapo recovery programme, since they prey on kakapo eggs and chicks and also eat many of the foods preferred by kakapo. A female kakapo is particularly vulnerable during the breeding season, because once mating has taken place she is essentially a solo mother, brooding her eggs and raising her chicks entirely unassisted over many months. This entails leaving eggs and chicks unattended for long periods at night, while she ranges, sometimes over considerable distances, in search of food for herself and her family. While she is absent from the nest, eggs and chicks are easy prey for kiore, or may succumb to exposure if left untended for too long. The threat to kakapo from kiore on Little Barrier has required a ‘sustained trap¬ping effort at each feeding station to protect the supplementary food source, as well as intensive control around nest sites.

The birds that have so far been transferred—three females and a male to Maud Island and two males of suspect fertility to another island—are thriving. The remaining five Little Barrier males are due to be moved to Codfish Island when the kakapo already established there return from temporary quarters on neighbouring Pearl Island, to which they were relocated earlier in 1998 so kiore eradication could take place (see Issue 39).

In the meantime, there have been dramatic develop­ments on both Little Barrier and Pearl. On Little Barrier, the recovery team has been searching for birds that have disappeared. Although all kakapo there are fitted with radio transmitters, if a bird’s transmitter fails, on such a rugged island it is effectively lost. For example, Mike and Lisa, two females, were last seen well over a decade ago. Also missing is a male called Snark, hatched in 1981 on Stewart Island—the first kakapo chick seen this century.

In January 1999, a hunt for Snark was mounted by surveying the “track and bowl” systems created by males seeking mates. Only five systems were identified, each the domain of one of the five known males, so Snark is now assumed to be dead.

Mating sign, however—a worn patch in the ground with downy feathers pressed into it—was found soon afterwards in two places, and in early March dog teams discovered Lisa on a nest with three eggs. The eggs—all viable—were transferred to the Burwood Bush nursery facility in Te Anau for incubation and hand-rearing, where they hatched later in the month.

The discovery of a female, particularly one that has mated successfully, is a major boost for the species’ breeding prospects.

On Pearl Island, mean­while, there has been considerable breeding activity, five females producing seven nests and 13 eggs. All the eggs, of which eight appear to be fertile, have been moved to Burwood Bush. Two laid by a bird called Alice were the first to hatch, producing two male chicks. These were the first kakapo eggs to be artificially incubated for their full term, an achievement that has finally allowed the incubation period to be confirmed-30 days, give or take a day.

The two females that have nested twice—Alice and Suzanne—have each produced a further egg since the removal of their first clutch. The discovery that females are capable of laying two clutches in a season, providing they are suffi­ciently well fed and of good weight (about 2 kg) by late spring or early summer, is of enormous significance in the quest to increase breeding productivity.

With the departure of the last of Little Barrier’s kakapo once the breeding activity on Pearl Island is over—probably in mid 1999—the kakapo volunteer programme on Little Barrier will come to an end. DoC estimates that up to 500 volunteers have taken part during its six years of operation. A similar programme begun on Codfish Island in mid-1992 has involved some 350 volunteers.

DoC is also hoping to find further kakapo on Stewart Island, after a previously unknown female was discovered there in June 1997. Searches have been carried out on the eastern side of the Tin Range, in the south of the island, but to no avail. One further search in an area not thoroughly checked for a number of years—the Pegasus Creek catclunent—is to be conducted.

Needless to say, with so few birds surviving, the addition of even one or two more individuals, particu­larly females of breeding age, would be a major lift for the kakapo population and improve the species’ chances of survival. 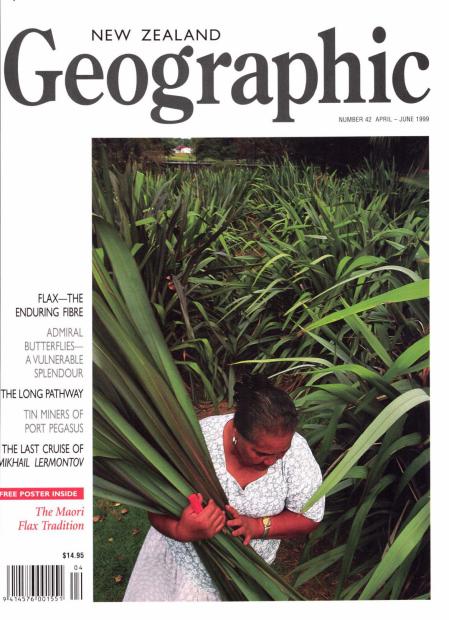