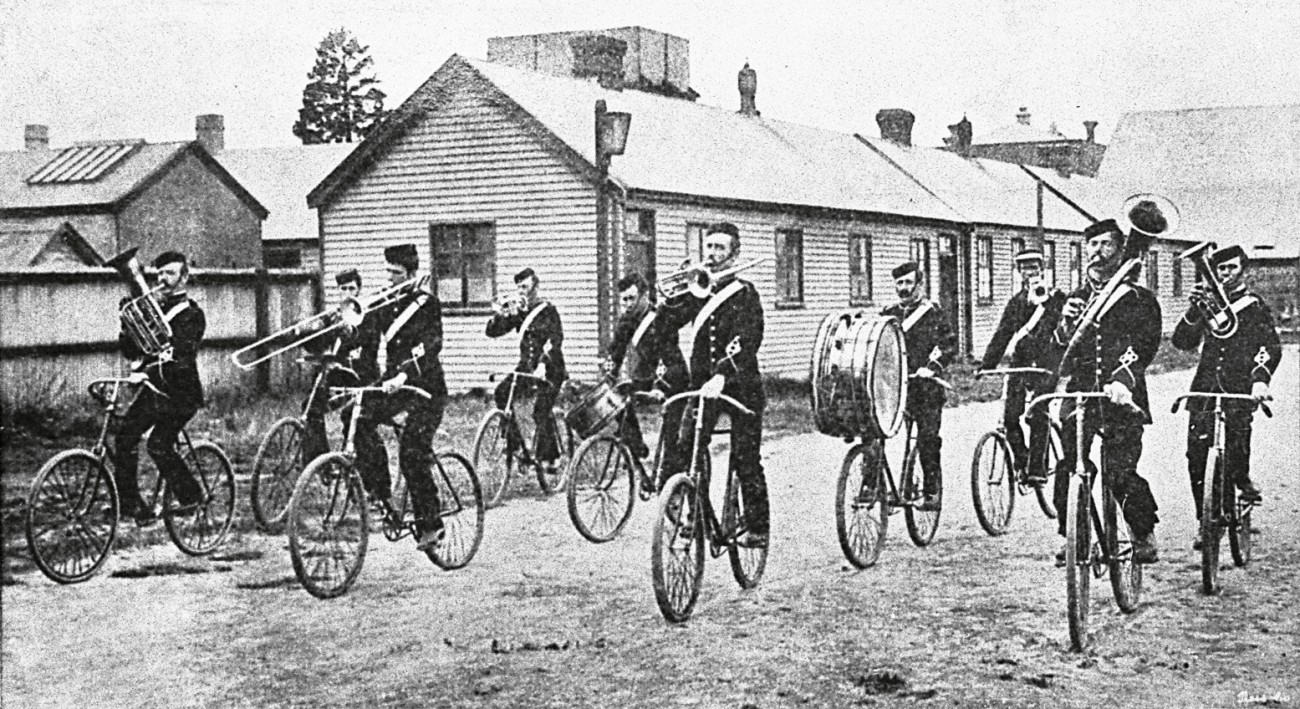 The evolution of early bicycles was a bumpy ride. Penny-farthings arrived in the 1870s. Too expensive for the poor and too dangerous for the gentry, they found favour with the middle class. The precarious position of riders directly atop the main wheel meant that when riding downhill, it was advisable to place feet on the handlebars, ensuring that when the inevitable catapult occurred on striking a bump, riders would be thrown feet-first instead of landing on their head. Penny-farthings were, however, preferable to their iron-framed and wooden-wheeled forebears of the 1860s—the velocipedes, or “boneshakers”.

New Zealand’s most entertaining group of cyclists, the intrepid Christchurch Bicycle Band, operated for a quarter of a century from 1895 until WWI. These suited daredevils cycled in formation down the city’s streets, melodiously trumpeting with one hand.

The group arose from the creative vision of the Painter brothers Joshua, a medal-winning trick cyclist, and Fred, the founder of the Christchurch Professional Brass Band. Fred cottoned on to the idea as a way to advertise the regular band, on the coat-tails of their bicycle-courier business. But in no time the bicycle band was in demand in its own right at community and civic events. Steering with one hand and playing instruments with the other (tandem in the case of the side-drummer), members cycled through the potholed streets of Christchurch, “the novelty of a band on wheels being scarcely believed by many”, proclaimed early newspapers.

They even held concerts in the Opera House, the bandsmen riding figure-of-eights around Joshua while he wheeled across a high-wire. The band would belt out tunes such as El Dorado, with a bass drum, a snare drum, valve trombones, tenor horns and cornets.

Though they initially rode penny-farthings, the band soon embraced new-fangled “safety bikes” that had been released at the end of the 1880s, with pneumatic tyres, ball-bearings and equal-size tyres. This easier mounting and dismounting with instruments was practised in Barracks Square, along with pedalling and playing in formation.

The Painter brothers’ bicycle band wound down with Fred’s death in 1912 and ceased altogether in 1915 after the outbreak of war.

Brett Painter, great-grandson of Joshua Painter, recreated the band at this year’s Ellerslie Flower Show in Christchurch, recruiting seven brave souls from existing bands and even incorporating a penny-farthing. With such enterprising forebears, Brett hopes to continue the legacy and entertain Cantabrians for years to come.