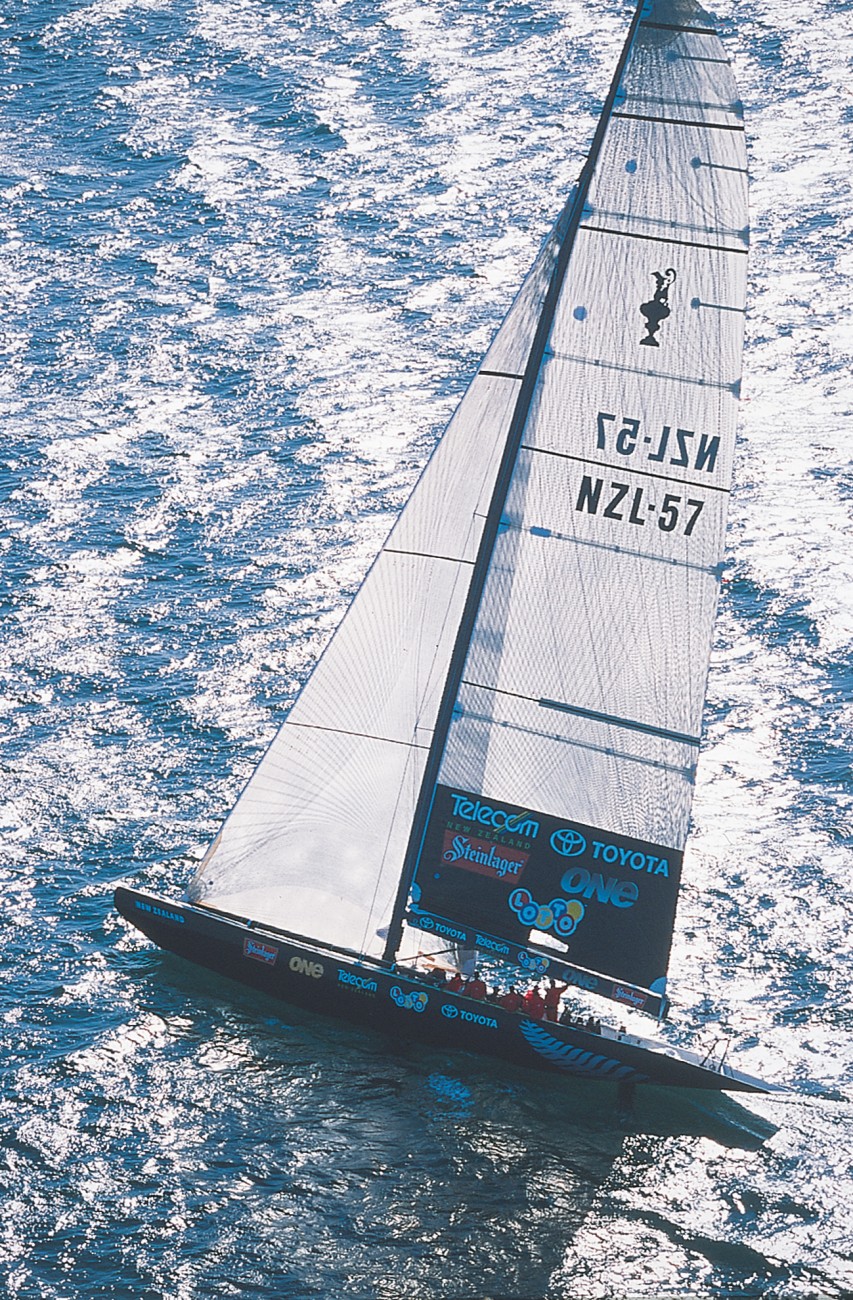 There is nothing like boat speed to win a yacht race, but if two boats are well matched, then knowing what the weather is about to do can give one a decisive edge.

One way to anticipate wind changes coming towards you is by observing their effect on the water. At the beginning of the round robin races for the Louis Vuitton Cup off San Diego four years ago, Team New Zealand actually hoisted crewman Murray Jones up the mast to get a better view of wind shifts on the horizon. This tactic worked so well that the other syndicates protested on the grounds that it was an unsafe practice. The protest was successful, but may have been motivated by the likelihood that the other teams had no one capable of spending an entire race dangling from a rope 30 m above sea level.

Even better than reading wind changes on the water is knowing ahead of time what to expect, and this is where weather forecasters come in.

The 1968 Olympics in Mexico marked a turning point for meteorology when the English yachting team took a forecaster to Acapulco with them. Over the weeks leading up to the competi­tion he released dozens of balloons over the course and tracked floating spars in the water to build up a picture of the local wind patterns and ocean currents.

He found, for example, that outflow from a nearby river caused a layer of fresh water to lie on top of the salt water, and it sometimes covered part of the race course. When the wind blew, the fresh water slid across the top of the salt water in the same direction as the wind. (Normally surface water moves at a consider­able angle to the wind, because of friction connect­ing it with water deeper down.)

In the lead-up to the competition the Mexican weather gods, perhaps flattered by all the attention the weather was getting, bestowed a rare phenom­enon on the English yachts­men: a shower of maggots, apparently scooped up from the ground further inland by a small tornado and dropped over the beach.

(The name of one of these gods, Huracan, has passed into English as the name for an intense tropical cyclone over the Atlantic. It is one of only two words in the English language derived from the Mayan language; the other is “shark.”)

During racing, the English yachtsmen took advantage of their new knowledge (but not the maggots), getting on or off the fresh-water layer, which they recognised by its colour, depending on whether it helped or hindered them. Their team did well, winning a gold and a bronze medal. Since then, weather forecasters have been a regular feature of Olympic yachting.

The expected weather conditions for regattas such as the Louis Vuitton and America’s Cups also play a big part in the design specifications for the yachts involved. Off Fremantle in 1987, the south-westerlies often rose above 20 knots and whipped up large waves. The sails and fittings of the yachts had to be robust enough to withstand these conditions.

The strength of the south-westerlies is influ­enced by the intensity of the daytime heating of the land. As summer progressed, the afternoon temperatures increased, and so did the strength of the south­westerlies. Dennis Conner’s yacht had been designed to perform best in strong winds, and this gave him the edge in the finals of the Louis Vuitton Cup, when he defeated New Zealand’s KZ7, which had won 41 races and lost only once before then.

Off San Diego, the winds were much lighter, with speeds averaging around 10 knots. Consequently, the yachts were not built to sail in strong winds, and when they did, disaster struck. On March 5, 1995, OneAtistralia broke in two and sank when racing against New Zea­land’s Black Magic II in over 20 knots of wind. Black Magic II also sustained damage, and might well have lost its mast had it continued to race. Both teams had questioned the decision of the organising committee to race in those conditions, as had the French team, but had been overruled.

What conditions are likely off Auckland’s North Shore for the America’s Cup this time? Well, for one thing, there is likely to be more variety than either San Diego or Fremantle offers. Wind speeds in the Hauraki Gulf often get up to around 20 knots, but can be less than 10 knots. Nor can we rule out the possibility of a visit from the remains of a tropical cyclone, such as Fergus, which brought winds in excess of 50 knots to the gulf in December 1996.

The wind can blow from all directions in the gulf, depending on the pattern of the isobars, although most of the time it is either south­west or north-east. In an El Nino summer south­westerlies occur more frequently, while in a La Nina summer north-easterlies are more likely.

North-east winds typically result from a slow-moving high to the east of the country extending a ridge of high pressure over the North Island, with the axis of the ridge lying to the south of Auckland. Over the Hauraki Gulf, the resulting north-easterly can often rise to 20 knots in the afternoon, gusting even higher.

When a stationary high lies to the west of the North Island, extending a ridge to a slow-moving high east of the country, and with the axis of the ridge lying to the north of Auckland, the day can often start with a light easterly which then peters out, allowing a south­westerly to break through in the afternoon.

The south-westerly is sometimes helped along by the formation of an area of low pressure east of the main ranges, known as a lee trough. The trough is partly caused by the mountains blocking the stable air in the high, but is intensified by daytime heating over the land, which lowers the pressure further.

Days like this provide the most fun for forecasters, as picking the strength and timing of the south-west change can be quite tricky.

Given that below-average sea-surface temperatures are continuing over the central and eastern parts of the Tropical Pacific Ocean, forecasters are expecting another La Nifia this summer. If this prediction works out, it will be the first time in over 20 years that the Pacific has experienced back-to-back La Nifias, and may indicate a long-term shift in the behaviour of the El Nifio-Southern Oscillation weather pattern.

Over the Hauraki Gulf, this should mean frequent north-east winds and therefore waves bigger than average, as the north-east wind has a greater fetch over the water before reaching the race course than the south-westerly does.

Between the design of the yacht and the tactics on the water, there are other weather decisions to be made. Not all the sails a syndicate has at its disposal can be carried on the yacht at any one time. In the hours leading up to the race a team has to choose which sails to leave on shore for the day, based on the weather conditions forecast for the race. An error of just a few knots in the forecast wind speed can result in the wrong sails being on board. In 1992, when New Zealand’s NZL-20 lost the Louis Vuitton Cup to Paul Cayard on the Italian boat 11 Moro, NZL-20 won only the first race of the finals. Cayard’s excuse for losing on that day was that he had misread conditions and used the wrong sails.

Getting the forecast right will be an important part of the jigsaw that the winning team will have to put together. Most of the syndicates have their own forecasters, who will seek to predict wind strengths to the nearest knot or two over the race course.

Team New Zealand is sticking with American Bob Rice, who served them so well last time in San Diego. AmericaOne has ace Austral­ian forecaster Roger “Clouds” Badham, who accurately predicted the carnage that befell the last Sydney-Hobart race in Bass Strait before the yachts had cleared Sydney Harbour. America True has John Crouch, and the Italian team, Prada, has Doug Charko, both locally based forecasters with many years of experience.

For me, part of the enjoyment of this summer’s racing is going to be watch­ing the battle of the forecast­ers. But I wish on none of them the experience of Mighty Mai), in the final race of the defenders series in 1995. Rounding the last buoy 44 boat lengths ahead of Dennis Conner’s Stars and Stripes, Mary headed for the finish line and the apparent certainty of sailing against Black Magic for the Ameri­ca’s Cup. When Conner’s boat rounded the buoy, he headed off in a different direction, gambling on a new breeze.

He got his wind change, and it blew him to victory in one of the greatest catch-ups in America’s Cup history.