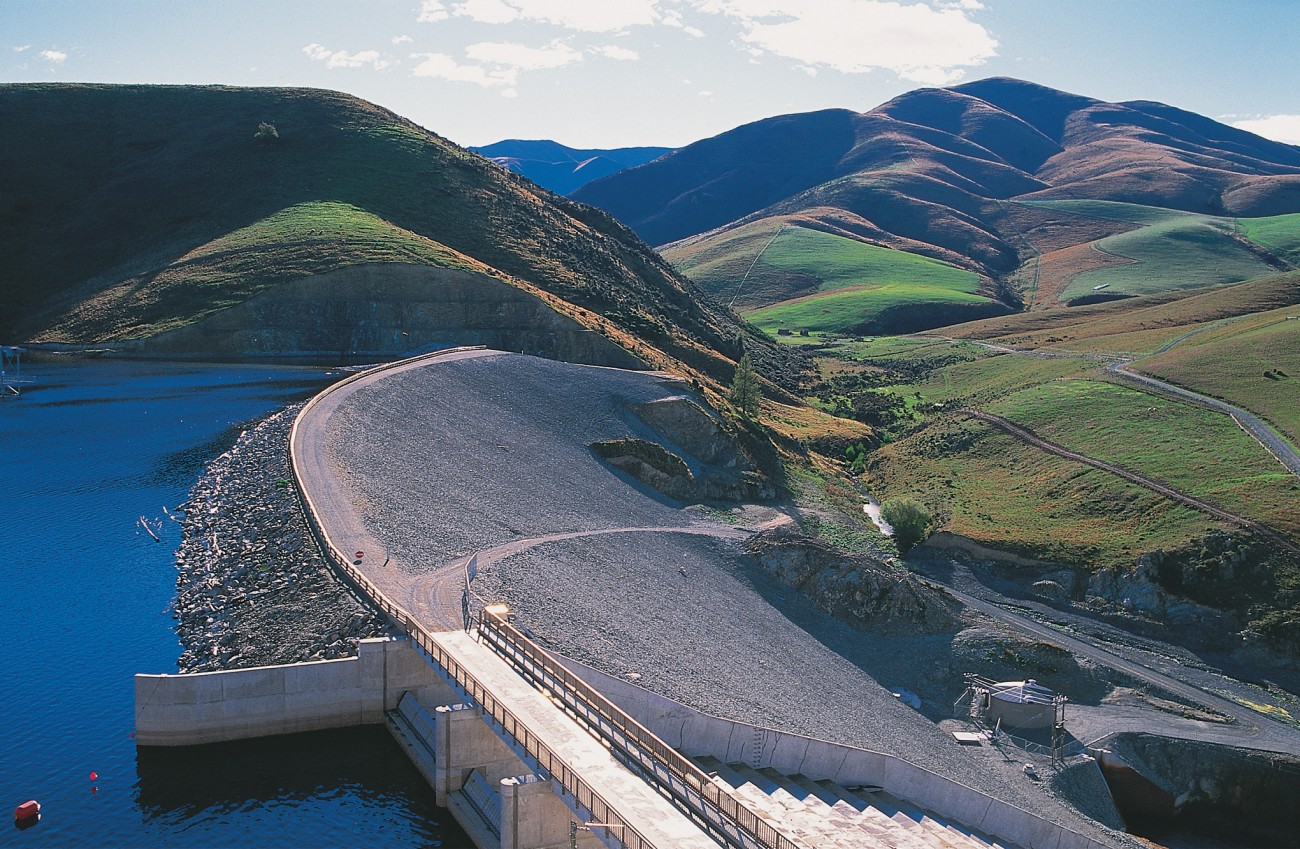 When South Canter­bury’s Opuha Dam hit the news in February 1997 it was for all the wrong reasons. The then partially completed dam had been breached by an unseasonal deluge, and the surge of water it released damaged a number of farms downstream.

But since then the project has got back on track. The repaired dam was completed in June 1998, and is showing signs of becoming just what its builders hoped: the linchpin for economic expansion in the region. Farming intensification, power generation, ecological enhancement to downstream rivers and a boost to tourism from the creation of a 730 ha recreational lake are among the expected benefits of the project.

Opuha is the largest earth dam built in New Zealand for almost 40 years. The 91 million cubic metres of water in its lake is designed to irrigate some 16,000 ha of farmland stretching from inland of Fairlie to the coastal plains between Pleasant Point, Temuka and Timaru. Indeed, the lake has been providing desperately needed water since late September 1998.

The Opuha scheme also generates a peak output of 7.5 MW of electricity, equivalent to about 6 per cent of South Canterbury’s annual consumption.

The project is a joint venture by private and community interests in the region, including 175 farmer shareholders, local electricity lines company Alpine Energy and the Timaru and Mac­kenzie District Councils.

Situated in the Opuha River gorge about 10 km north-east of Fairlie, the dam is 50 m high and 265 m wide at the base. It stretches 300 m across the gorge and contains about 850,000 cu. m of hard fill quarried from river terraces upstream.

Construction manager Chris Hollingum says the site chosen for the dam is extremely sound geologi­cally. The gorge walls are of hard rock, and the nearest major fault line is 12 km away. The stability of the site allowed earth to be used rather than concrete, saving several million dollars.

The design incorporates some of the latest overseas innovations in dam construc­tion, including a stepped spillway, the first of its kind in New Zealand. This dissipates the energy of the water more effectively than a conventional spillway, and is also shorter and therefore cheaper to construct, says Hollingum.

In addition, the dam includes features to meet environmental and ecologi­cal requirements, including the provision of a pipe lined with small rocks to allow eels to pass upstream. Further ecological benefits will extend downstream. In past summers, the Opihi River system (of which the Opuha River is a part) has been known to dry up, stranding fish which have had to be rescued. Releasing stored winter water in summer will now allow minimum flows to be maintained, providing fish and other river life clear passage year round.

The power station also breaks with tradition. Turbine and generator are housed in a concrete cylinder 17 m high, most of which is buried. The roof can be removed in about 10 minutes and the machinery lifted out with a mobile crane, saving the expense of installing a permanent heavy-duty gantry. Water reaches the power station via a 200 m-long, 2.5 m-diameter pipe from the bottom of the lake.

Construction began in November 1995, when the river was diverted to the right-hand side of the gorge so the dam foundations could be laid on the left‑hand side. Later the river was diverted through a pipe to the left so the foundations could be extended across the entire width of the gorge. Once the base had been completed, the dam was built up in steps to its full height.

Construction was set back more than a year by the dramatic breach of the partially completed structure on Waitangi Day 1997, following a flash flood. After this disaster, three temporary flood channels were cut at different levels on the left-hand side, designed to cope with a 1-in-200-years flood event. Each channel was covered over as the dam was rebuilt to its full height.

Permanent flood protec­tion is provided by the main spillway—also designed to handle a 1-in-200-years event—and a “fuse plug” near the top of the dam. The plug is designed to wash out slowly in the event of an extreme flood to let excess water over the dam.

The upstream face of the dam is covered with fine shingle lower down and metre-wide boulders closer to the top as protection against wave damage. Downstream, the riverbed has been deepened by eight metres to increase the vertical water head for the turbine.

Complementing the dam is a smaller weir about a kilometre downstream which can hold up to 52 hours of river flow, and this is an integral part of the whole scheme. Opuha is primarily an irrigation scheme, and power genera­tion is a bonus. The main objective is to have a dam full of water to irrigate farms downriver when the weather turns dry, as it regularly does, and to maintain consistent minimum flows in the downstream rivers. If power demands are high in the morning and the dam is not full, water can be run through the turbine, then corralled in this pond. It will be released gradually during the rest of the day, and no more water will be taken from the main dam.

Most of the water for irrigation is drawn from rivers well below the dam. When the dam is full, power is generated from the overflow continuously. No staff are situated on site, and all controls are operated remotely.

Ollie Turner, former economic development officer for Timaru District Council, says the dam is central to South Canter­bury’s economic develop­ment. “Securing a reliable supply of water will reduce the costs of droughts and open up new diversification options for farmers,” he claims.

One of the most likely diversifications is expected to be the conversion of sheep and beef farms to dairying. The transition is relatively simple, and the high conver­sion cost is far outweighed by higher returns. Breeding ewes currently return $360 per ha, and bull beef $320—only a fraction of dairying’s $3000 per ha. There is also plenty of spare capacity in local dairy company process­ing plants.

Expansion of dairying will have a positive spin-off for dryland farmers, who stand to benefit from increased demand for off-farm grazing of dairy herds during winter.

The development of intensive beef feedlots is expected to be another growth area, according to Turner, one which would generate enormous demand for extra feed. Horticulture is also likely to expand.

Farmers who choose to remain with sheep and beef will benefit from the dam too, says Turner, as a reliable water supply should signifi­cantly boost gross-profit margins. This in turn will help secure a long-term future for the region’s major meat-processing plants in Timaru and Pareora, along with hundreds of jobs.

Vegetable processing is another sector touted as likely to see growth, with the infrastructure already in place. McCain Foods has a strong presence in the region, having taken over and expanded the former J. Wattie Foods factory at Washdyke, and Skeggs Foods operates a vegetable-processing plant at Studholme, south of Timaru. Further afield, more process­ing capacity is available at Talley’s Ashburton plant.

The considerable recrea­tion potential of the lake for boaties and anglers is bringing additional eco­nomic gains by boosting visitor numbers in summer.

Turner says economic-impact studies suggest the total annual boost to the region’s economy, from higher returns to farmers and flow-on effects from this extra income, could be in excess of $20 million a year. The dam is predicted to create 400 new jobs over the next decade, mostly in primary-produce processing.

The economic recovery of South Canterbury, it seems, is just around the corner.