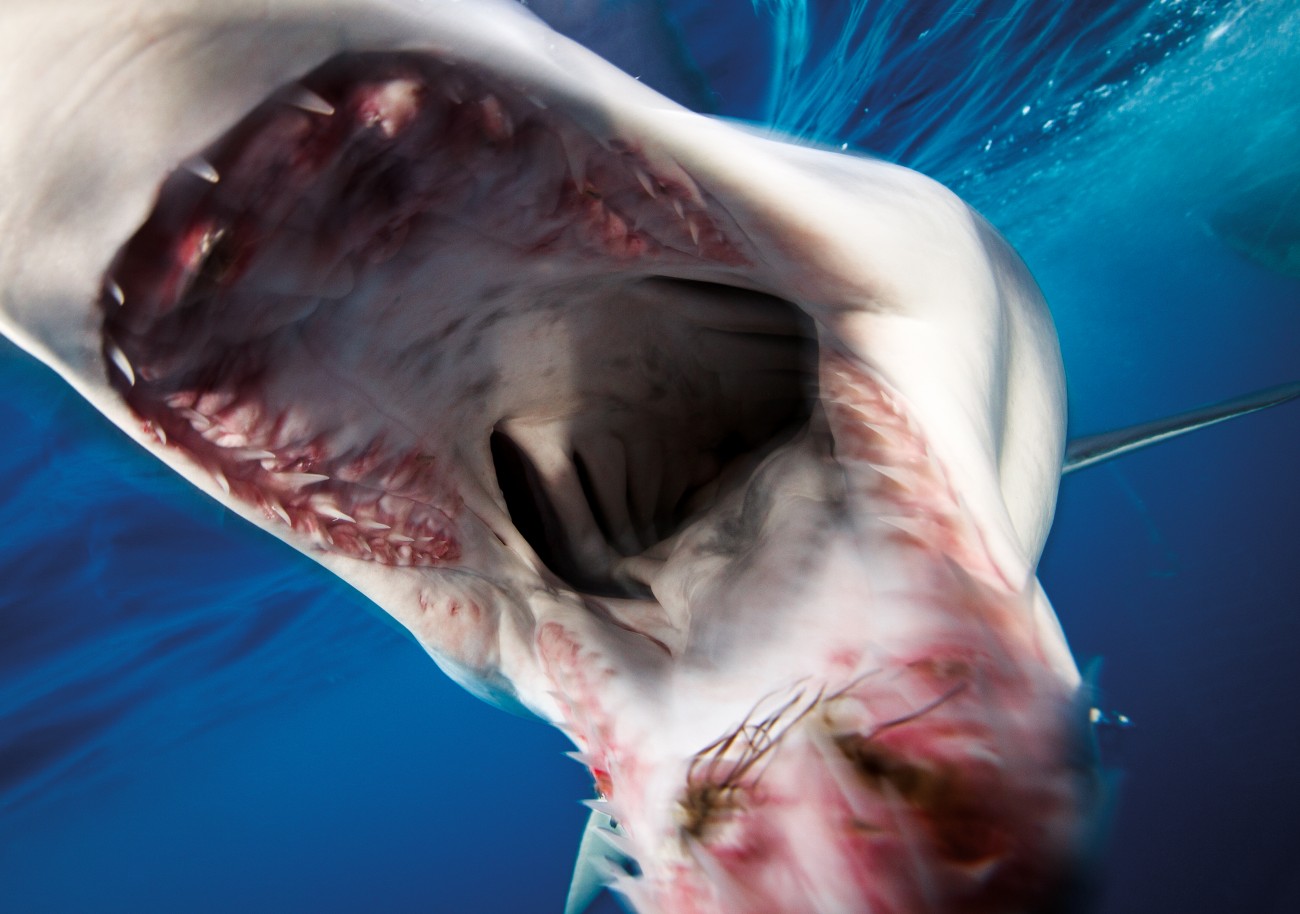 We are slowly beginning to understand the natural rhythms of this realm and the creatures that inhabit it, even if many misconceptions still exist. The mako shark, equally revered and feared, being a case in point. Richard Robinson photographed this magnificent predator for a year and a half in the production of this feature, and is reluctant to buy into either of the perspectives that polarise our view of sharks—we see them as man-eaters, or a creature both misunderstood and benign. Neither opinion is completely true, says Robinson. “Sharks don’t seek out humans as a food source,” he says. “But I’ve been approached by enough of them to know that a bit of distance is a good thing. They’re fast and scary things, and as much as I treasure encounters with them in the water, I wouldn’t trust them an inch.”

At dusk, moments after shooting the frame reproduced on page 47, a very large shark came up from the depths and slammed into his underwater housing. “It basically swallowed the camera,” he remembers. “I think it’s the closest I have ever come to having a serious injury—pitch black, being caught off guard, and hands basically in its mouth. Despite destroying the dome, remarkably the camera survived.”

Even as we come to terms with the creatures around our coast, and our relationship with them, the realm of our Exclusive Economic Zone—and beyond—needs consideration too. It’s still an area we’re growing into, politically. We assert our sover­eignty with bathymetric, seismic and biological surveys, by the granting of mining licenses and regular military patrols.

The New Zealand Navy rarely ventures as far south as it did in January, nor does it often come across such a bold flouting of fisheries agree­ments as when crew discovered a Spanish-owned vessel, the Kunlun, illegally gill-netting toothfish. The routine patrol of Antarctic waters turned into an international confrontation between states and pirates. Later the direct-action conservation group Sea Shepherd joined the chase, which lasted nearly four months and crossed three oceans; a pursuit that ended in the dramatic scut­tling of the offender—a tale told in this issue in revealing detail by Christopher Pala.

The episode received only modest press attention here, perhaps because it played out so far from our shores. Yet it occurred in our waters.

As a nation so wedded to H2O, culturally and physi­cally, shouldn’t things aquatic be of greater public concern?

They may be coming to the forefront of our attention soon. The Office of the Parliamentary Commissioner for the Environment is currently working on the second report into sea level rise and the potential effects on our coast, infrastructure, livelihoods and economy, results that will also be reviewed in the next issue of this magazine. Whether or not we choose to embrace our new domain, for business or pleasure, it is beginning to embrace us more completely with each passing day.