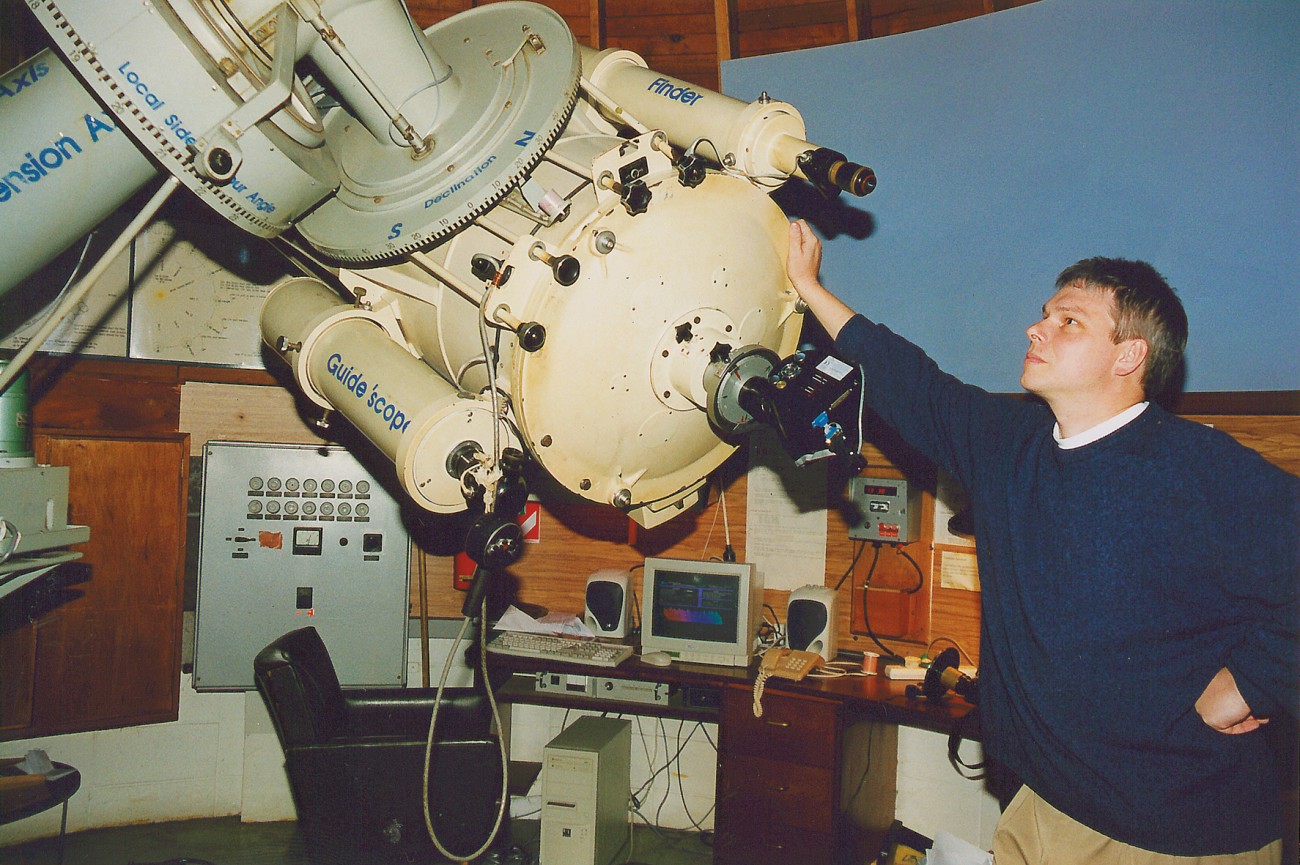 At one time or another, nearly all of us have wanted to have a close-up look at the stars, and we have envied the professional astronomers their access to really big telescopes.

Just think what you could see given an hour or so with our neighbour’s instrument, the 4 m-diameter Anglo­Australian telescope. But this is a pipe dream. The compe­tition for time on these large telescopes is intense, and the timetable slots are doled out as parsimoniously as Oliver’s gruel.

Of course, even the highest-minded will manage an illicit peep from time to time (“Just checking”), but there is no question of spending a couple of hours rambling around the skies for the sheer joy of it—that is the privilege of the amateur.

Eyeballing with a tele­scope, from the point of view of observing as opposed to just gawking, is a waste of a resource, for the eye is a stunningly inefficient receptor of stellar photons. At best, it has a quantum efficiency of about three per cent. That means that of every 100 photons arriving at the eyeball, only three or four produce a signal in the optic nerve.

Moreover, the retina is a stimulus/response mecha­nism; like a mousetrap, the rods and cones fire as soon as their trigger threshold is reached. Alternative detec­tors to the eye—the photo­graphic plate, the photoelec­tric multiplier tube and the Charge Coupled Device (CCD)—have the ability to accumulate light before they are triggered to generate a signal. A long-exposure photograph with a telescope can reveal objects such as faint stars, nebulae and galaxies which remain in­visible to the human eye, no matter how long you look.

It is a happy accident that these various accumulative light receptors also have a much greater quantum efficiency than the eye. Standard CCDs are rated 65 per cent, but the latest designs of chips achieve almost 95 per cent efficiency. Unhappily, these last are still prohibitively expensive.

It is the prerogative of the amateur to roam around the sky at will, for time and equipment are his or her own, domestic disagree­ments notwithstanding. But such sightseeing is not the be-all and end-all of the hobby, for it is possible to achieve professionally acceptable levels of compe­tence as an observer/ recorder of scientifically useful data. Since the 1950s, the observation of variable stars, which involves measuring their brightness as it changes, has been particu­larly attractive to amateurs as an opportunity to make a contribution to the science of astronomy.

Stimulated by the commissioning of the $1 million 500 mm Zeiss telescope in 1967 (donated by a public-spirited citizen, Edith Winstone Blackwell and named for her), the variable-star observers in the Auckland Astronomical Society designed and built a photoelectric photometer. This instrument gave the observer a tenfold increase in accuracy—to *0.01 magni­tude—over the earlier method of visually assessing brightness. Over the years, photometric observations with the EWB Zeiss have demonstrated that, contrary to the murmurings of the naysayers, accurate data on even faint objects can be acquired in spite of the horrendous light pollution created by the five contigu­ous cities that make up Auckland.

One might think that spending all night recording counter readings was dry stuff, a poor substitute for gazing at stellar glories, but what you lose in visual excitement you recoup in your growing understanding of phenomena and even the modest fame that comes from the publication of results. Like other profes­sionals, “real” astronomers are only too happy to talk to and advise amateurs on collaborative observing programmes; after all, imitation is the sincerest form of flattery.

Moreover, the major observatories are designed to detect the faintest of objects, and so are equipped with ever-bigger telescopes and increasingly sensitive detectors. Brighter pheno­mena cannot be readily scheduled into their carefully organised operations. Thus it was weeks before the biggest telescopes could look at the supernova of 1984, and initially telescopes of modest aperture were more than adequate. In such situations, observations by well-equipped and experi­enced amateurs often form an essential part of the record.

Sometimes apparently humble results sit for years before being recognised and wheeled out to support a new theory. An extreme example is Galileo’s inadvertent recording of the position of Uranus, which he thought was just another star, and which he sketched in the field of view with Jupiter and its satellites. When the rogue star was finally recognised for what it is, this position was used, with other prediscovery records, to refine the orbit of Uranus.
Today, development of the CCD camera, increases in the speed and memory of PCs and the growth of resources on the World Wide Web have made available to amateurs tools that were the exclusive preserve of major observato­ries not much more than a decade ago. Anyone can now equip their observatory with the hardware needed for high-quality quantitative observations, the only limit being the quality of their telescope and bank balance.

A notable example of a fine and useful homemade observatory is in Otahuhu. Close to the centre of the commercial area and barely above the mangroves, the Mount Molehill Observatory is on as unpromising a site as one could find. Yet, by dint of using an excellent homemade 300 mm Cassegrain telescope fitted with a ST6b CCD camera, Marc Bos can “see” stars as faint as those that may be eyeballed with the great Mt Wilson 100-inch telescope in California.

Bos recently joined the Centre for Backyard Astrophysics, an interna­tional collaboration for the observation of cataclysmic binary stars. As light relief from quantitative observa­tions he makes images of deep-space galaxies and nebulae, which are impossi­ble to see or to photograph in our light-polluted skies.

Up and down the country there is a quickening of interest in astronomy as the affordability of the CCD camera increases the power and scope of even modest telescopes. In Hamilton, a locally made 61 cm telescope has been commissioned, while in the Wairarapa the recently formed Phoenix Society is building an observatory complex housing both reflectors and refractors for research and recreation (see New Zealand Geographic 42).

Auckland is singularly fortunate in that the original gift of the 500 mm Zeiss, coupled with the granting of an urban park site, gave the city an enviable base for astronomical work and education. In 1997, a planetarium was added, and now Auckland Observatory has installed the Orr telescope, a 300 mm Maksutov, in its own dome—so doubling the observatory’s capacity for research—and appointed a new director.

Ian Griffin, an experi­enced planetarium director and a successful asteroid hunter, has already boosted local interest in astronomy. Among his initiatives has been an observing pro­gramme for the discovery of minor solar-system bodies: asteroids, comets and meteors.

Asteroids are fragments surviving from the formation of the planets. The biggest, Ceres, 950 km in diameter, is about one quarter of the total mass of all the asteroids. At the other size extreme are grains of dust, which we detect only when they become incandescent meteors and vaporise in the upper atmosphere.

Most asteroids orbit the Sun between Mars and Jupiter in the Asteroid Belt, but some are in other orbits. Two families, the Armors and the Apollos, are of special interest to us, as perhaps 2000 have a diameter of 1 km or larger and are “Earth-approaching asteroids,” meaning they could hit the Earth. The impact of bodies this size would have catastrophic effects on a continent-wide scale. The Chicxulub impact, which is believed to have effected the extinction of the dinosaurs, is estimated to have been 10 km in diameter. The orbits of those asteroids we have detected so far pose no immediate threat; the chance of a collision during the next century is only one in several hundred thousand. But what about those we have yet to discover?

Using the technique of strip scanning, almost every clear night the Zeiss tel­escope goes fishing for these elusive objects. The trick is to make two exposures some time apart, then to look for anything that has changed its position. Bodies beyond the solar system appear station­ary, static relative to one another; hence the idea of the “fixed stars.” By contrast, comets, asteroids and orbiting rubble show movement against the background stars and changes in their position are easily detected.

One of Ian Griffin’s objectives is to involve visitors to the Auckland Observatory in astronomy as a science rather than just an amusement. By linking the telescopes through video cameras to monitors in a viewing room, he will enable the public to watch observers at work and enjoy an observer’s-eye view of the objects being studied, and the data as they accumulate.

The possibilities of such participatory viewing, coupled with a two-way audio channel, range from space spectaculars (such as views of the moon and planets and out to the nebulae and brighter galaxies) to the monitoring of fast events (such as the eclipses of close-contact binaries), the flickering of spotty stars and the move­ment of asteroids in near-Earth orbits. The future of Auckland astronomy is looking bright.