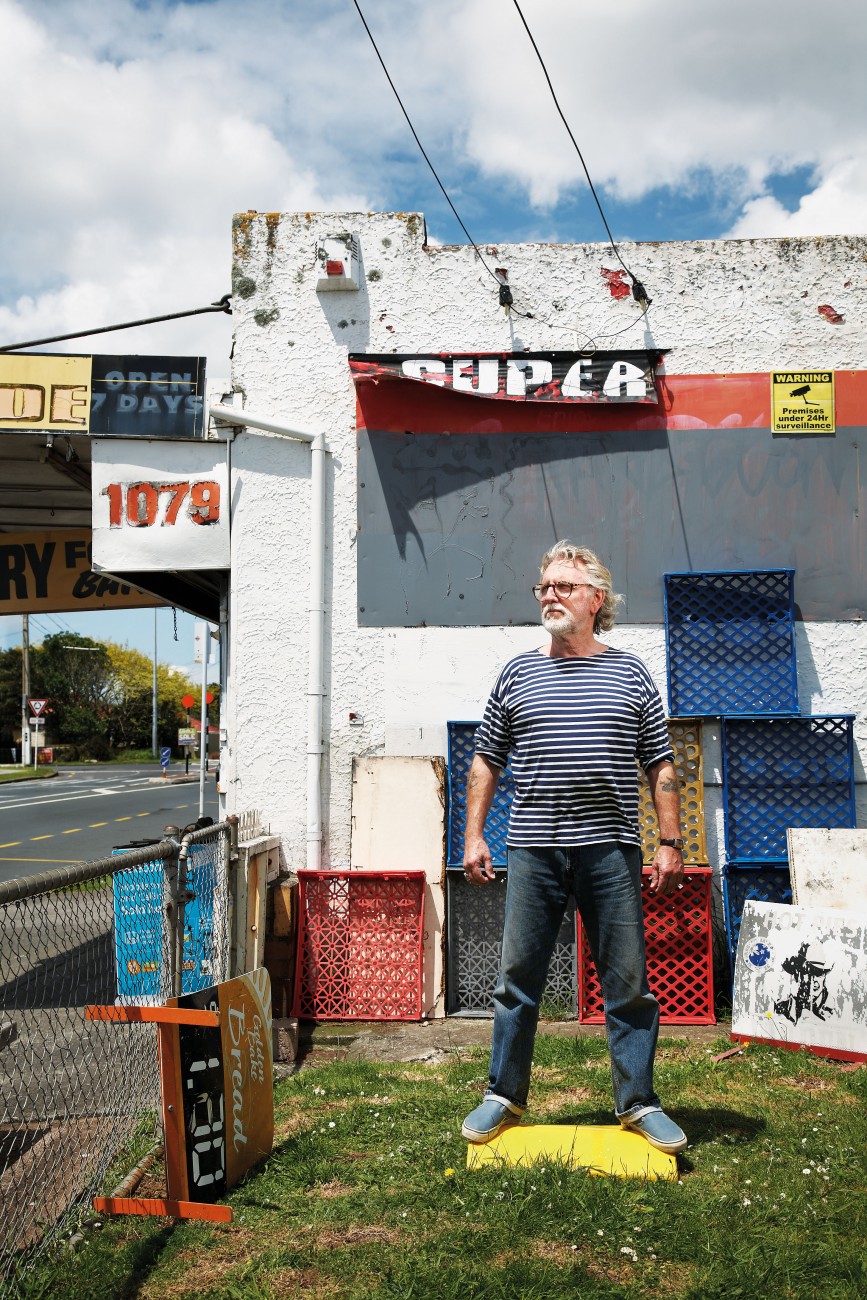 Dick Frizzell is always on the hunt. He’s keeping his eyes open for the next ‘Frizzell’—a fish-tin label, a kink in a rural road, a cluster of sale signs on a fruit stall. A cultural magpie at large, Frizzell has carved a niche by painting icons of New Zealand life—overlooked motifs that, once identified, instantly become part of what we all recognise as Kiwiana.

Now 69, Frizzell has painted still lifes, pop culture, landscapes, ephemera, children’s books—a seemingly haphazard collection of media and subjects that he insists has a central theme. By identifying cultural icons from the clutter of our everyday life, Frizzell says his work sparks a relationship with the viewer.

“I like that little flash of recognition. It’s that connection that people want; they want to feel connected. And they want the connection to be personal and real,” he says. “They see some kind of cheerful affirmation of their environment, where they live. They think, ‘Oh yeah, New Zealand’s cool’, and I’m happy with that.”

Frizzell grew up barefoot in Hawke’s Bay, cycling between haunts in Hastings—the swimming pool, the sawmill, out to the river and the picture theatre.

“My father was an engineer at the freezing works and would bring home meat, and take me rabbit shooting in the weekends,” he says. “As I grew up and read Kiwi literature, I began to realise that you have had this kind of iconic upbringing. I think it puts you in a position where you feel comfortable to comment.”

By the time he left Canterbury University art school he and his wife, Jude, had a daughter, so Frizzell began his art career determined to make a living from it. First in advertising, for seven years, then painting.

He began with a series of successful exhi­bitions, painting humorous self-portraits, and everyday objects such as fish-tin labels.

At the age of 44, Frizzell experienced a sort of mid-life painter’s block. In desperation, he turned to the New Zealand landscape—in particular, to the scenes of his boyhood. The works he produced over the next four years proved as popular with the public as they were in the art world, “working in effect exactly as I’d hoped they would”, says Frizzell, “helping a new generation re-see their world.”

In 1990, he turned to New Zealand’s cultural landscape, producing a series of works around the Maori adornment, hei tiki. His exhibition included 29 paintings, 25 works on paper and three sculptural pieces, all riffing on the well-known symbol in Frizzell’s bold colours and stark, graphical style.

Frizzell was labelled a “spiritual assassin”. But he responded that nothing was off limits and, after all, souvenir stores abounded in cheap plastic knock-offs of greenstone hei tiki.

“You cannot protect a culture by saying, ‘I only want this bit of it, and not this bit. I only want the greenstone tikis and not the plastic tikis’…Without the input of the bad, and the trashy, and the accidental and everything else, you’ll never get the good stuff.

“I just thought, ‘Well, I’ll just go out and make all the trash myself.’”

Frizzell stayed away from the public furore that erupted as a result of the work, and remains unapologetic.

“I think part of what an artist is meant to do is awaken people’s awareness of their environment. It’s like keeping people’s eyes open,” he says.

“Every generation has to have their own artist to represent them. It’s that thing of building paradigms, models of reality to make sense of it.”

Frizzell wears his signature striped top for the interview, sleeves rolled, with a shock of erratic white hair echoing his white goatee, and round tortoiseshell glasses perched on his nose.

He wears the same outfit to every media event, in every photograph, and posi­tions himself for the camera in much the same way every time, as if creating his own motif, becoming his own icon.

Indeed, he’s loaned his name to a wine label, and has a coffee label in development. There’s an advent calendar at Wynyard Quarter in Auckland and he’s producing prints to fundraise for a ‘Save the Whales’ campaign. It’s this flexible attitude to art and commerce that many art aficionados find so hard to swallow.

“I paint to succeed, I hate to tell you, I don’t paint to fail,” he says. “I’m a serious painter who just uses ‘low art’ as an inspira­tional source. I just go in there and I exploit it. Like Cezanne exploited apples.”

In his perpetual quest to identify icons that New Zealanders can relate to, he has created an iconic status for himself as well.

“I’m a one-man class distinction. Dick Frizzell. I’m kind of enjoying it, to be honest.”