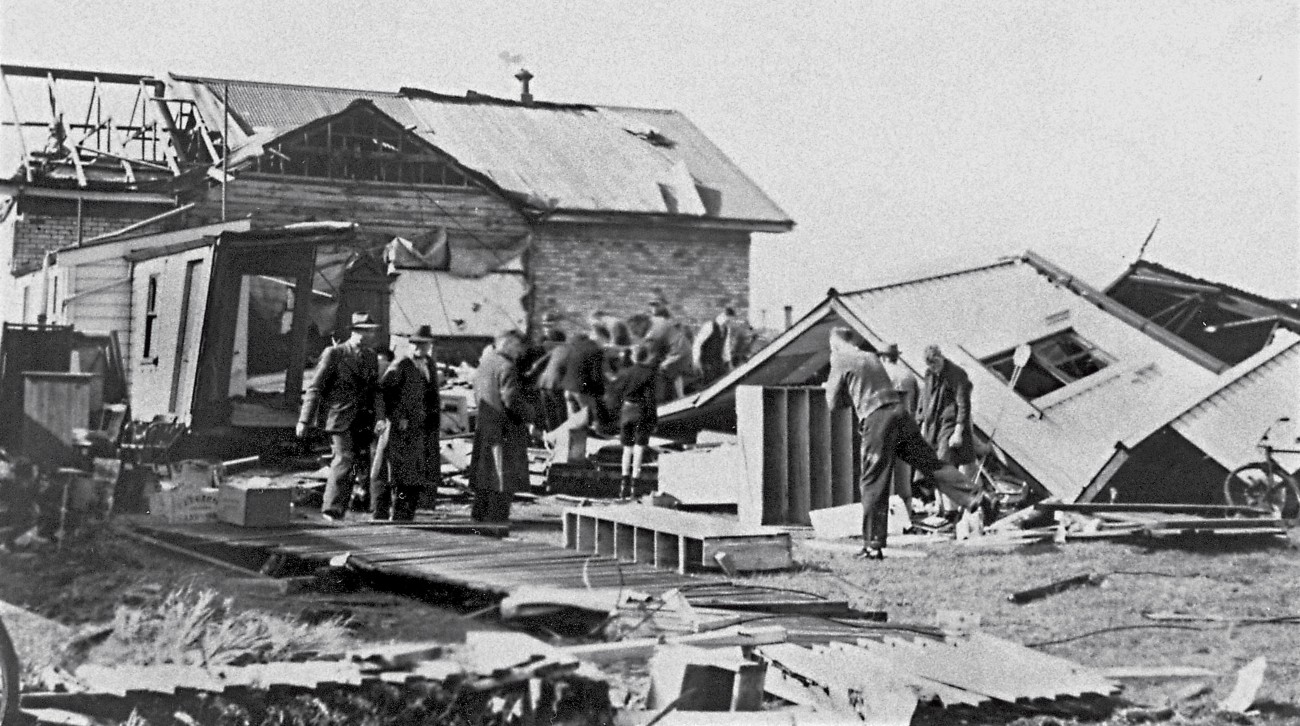 Some of the people affected were also caught in the much stronger tornado that struck Greymouth on March 10, 2005. This tornado caused $9 million worth of damage, mostly in the business district, but 40 homes were also damaged. Wind speeds may have reached 250 km/h. Remarkably, only six people were injured and there were no fatalities.

Among the lucky escapes were residents of a rest-home. One wing of the building lost its roof and was badly damaged, but luckily all the residents had congregated in another part of the building to see a podiatrist. Many people had close calls with fly­ing debris and the tornado narrowly missed the main shopping centre.

The windows of a fleet of 14 buses were smashed in the bus depot and a 12 tonne truck was overturned, along with a number of cars. Trees were up­rooted, power poles snapped and the substation damaged, cutting power to half the town for several hours.

A detailed report on the tornado’s damage and the community’s response has been prepared by Kristen MacAskill, a student at the University of Canterbury’s Depart­ment of Civil Engineering and can be viewed on the website www. resorgs.org.nz.

After the tornado passed, people were quick to begin the clean-up; those not directly affected helping those that were. Tedious, though necessary, was the task of picking up thousands of shards of glass from all the broken windows. More dif­ficult was the job of securing the large buildings that had sustained the worst damage—some losing walls as well as roofs.

Expert help with this task was provided by a task force from Urban Search and Rescue (USAR) who were sent from Christchurch. Jointly administered by the Ministry of Civil Defence and Emergency Manage­ment and the New Zealand Fire Service, USAR personnel are trained to rescue people trapped in col­lapsed buildings as well as securing dangerous structures to minimise the risk of further damage or injuries.

The West Coast is one of the most tornado-prone areas of New Zea­land. Indeed, the path of this tornado was close to a previous tornado in 2003. Conditions favourable to the formation of tornadoes often occur in the north-west flow just ahead of active cold fronts. The north-wester­ly winds at the surface are deflected by the land to blow from the north­east—parallel to the coast. This air acts as an obstacle to the north-west winds further out to sea, which can rise over the northeasterlies, thereby triggering the formation of cumulo­nimbus clouds. If these develop in­tense vertical motion, they can suck up some of the air in the surface north-east flow, which induces rota­tion inside the cloud, which in turn can intensify into a tornado.

Although the Greymouth tornado was one of the most damaging on record in New Zealand, it pales in comparison with tornadoes in the United States. For example, on May 4 this year, a large, intense tornado, obliterated the town of Greensburg, Kansas. Winds of 300 km/h de­stroyed 95 per cent of the buildings in the town of 1600 residents.

Thankfully, the tornado was well forecast and people had 20 minutes warning to take shelter in cellars and basements. Only 10 people died,  and around 60 were injured. Two women survived 48 hours trapped under the rubble of a church. Dur­ing the clean-up, four soldiers were arrested for looting alcohol and cigarettes. They were not part of the official rescue forces but had gone to the town to help on their own volition. Two other people were arrested for impersonating Red Cross officials. On the upside, the town’s famous 1000 pound meteorite was found intact, snuggled down under the ru­ins of the museum.

Before the advent of weather radar and modern forecasting tech‑niques this sort of disaster would have claimed hundreds of lives. Just how lethal a tornado strike could be in the United States is the subject of a study published earlier this year in the Bulletin of the American Mete­orological Society.

The authors consider the scenario of one of their largest, strongest and long-lived tornadoes spending its entire lifetime crossing the city of Chicago. Depending on the precise track such a tornado took, there could be more than a quarter of a million homes destroyed and a death toll as high as 63,000. The total number of people affected could be upwards of 600,000 with a damage bill as high as US$40 billion.

It is interesting to speculate on a worst-case scenario for a New Zea­land tornado. Our most lethal tornado on record struck Hamilton on August 25, 1948, killing three people and destroying 150 houses. One woman and her two young children got up from the lunch table in the kitchen to watch the approaching black cloud.

They got as far as the front hall when the house was picked up, spun around and slammed into the house across the road. The back of the house, including a bedroom, the kitchen and the bathroom were completely smashed. Most of the roof was removed and the remaining walls fell out. The only part intact was the hall, were the woman and her two children lay, unharmed. De­bris from some buildings was carried as far as Cambridge.

This tornado spent much of its lifetime over farmland and was on the ground for only part of the time as it crossed the city. If a tornado of this intensity occurred again and spent its entire lifetime on the ground cross­ing an urban area, it is conceivable that the death toll and damage could exceed that of the 1948 tornado by a factor of 10 or even more.

Tornadoes are also a fabulous source of stories of bizarre phenom­ena, such as blades of grass inserted into tree trunks. On occasion they have been known to pick up schools of fish, from lakes and esturies and deposit them over land, carefully sorted according to size. “Rains” of spiders, crayfish, maggotts and hazelnuts are also on record from around the world.

A herd of steers were once seen flying over Kansas, looking like a flock of gigantic birds. Tornadoes can occasionaly put things down gently. A nine-year-old girl on horse­back was picked up by a tornado in South Dakota in July 1955 and seen by her mother flying over a river. She reported landing on her tummy like an aeroplane, and clutching the grass when she came to rest.

In 1920, near Hackleburg, Ala­bama, a tornado shot and killed a man. He had made the mistake of having a loaded shot-gun on his wall when the tornado came knocking.

However, picked up by the gen­eral excitement, journalists have been known to fly across the bound­ary from fact into fiction. Stories of metal jugs turned inside out, or turkeys stuffed into bottles with only their heads sticking out, are now dismissed as exaggeration, albeit worthy of Mark Twain.