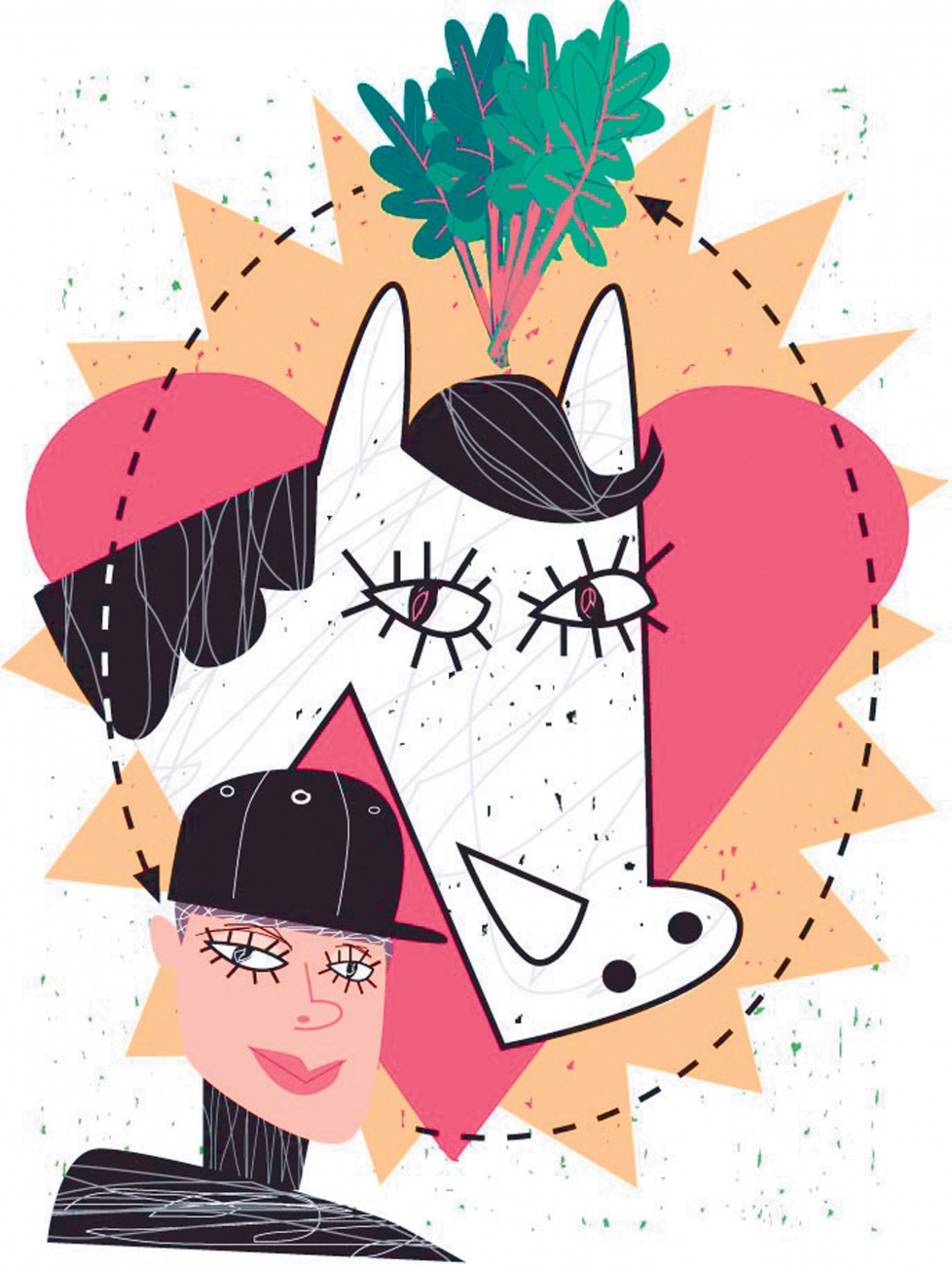 My garden’s doing  pretty well right now. At the risk of sounding both sanctimonious and trendy, it’s a Good Thing to grow your own vegetables, despite the fact that clinging to the side of a Wellington hill means developing a taste for an awful lot of silver beet.

Even Clever Hans, the famous 19th century mathematical horse was apparently merely reading his trainer’s facial expressions in order to know when to stop tapping his hoof—which seems quite clever enough, actually, given that I am unable to train my horse to stop and go in an orderly fashion no matter how many facial expressions I employ. Both square roots and the targeted fertilising of vegetables are beyond us at this point in our relationship. So what I do is, I feed the horse elsewhere, collect the copious product of its digestive system, and put it on the garden myself.I am the link between horse and vegetable. I do not mean that in an evolutionary sense, you understand. However, it does seem that I need the horse in order to have vegetables.

I don’t, of course, need vegetables in order to have the horse, but it does help to make an approximately virtuous circle out of an activity that in truth is quite indefensible. You see, I don’t have the horse for its bowel movements alone. I also ride it.

Horse-riding is often associated with noble and romantic ideas of Harmony and Nature and the Great Outdoors, but the brutal reality is that it involves forcing an animal into leather con­traptions akin to the tools of trade of a dominatrix and shoving a piece of metal into its mouth in order to bend it to your will. We tell ourselves the horse enjoys it, although that’s wishful thinking because it’s very hard to tell what a horse enjoys. A horse is an inexpressive type of animal, not disposed to effu­sions of affection or enthusiasm for anything much except food. So my horse and I have a deal. I give him food, and he lets me sit on him and make him do very unnatural things. It’s a primitive kind of arrangement with a very thin veneer of moral acceptability, due to the fact that I don’t intend to kill and eat the horse at the end of it all—at least, not unless the silverbeet is stricken with a disastrous blight which wipes out the entire crop and it comes down to the horse or me. And also due to the fact that the horse could quite easily kill me at any time, though I think even he may draw the line at eating me. This unspoken agreement (well, obviously it’s unspoken—we’re not dealing with Mister Ed) to let each other live allows me to pretend it’s a partnership, even though sometimes he seems to think he’s entitled to cause a little physical damage, the odd minor concussion or broken bone, just to remind me who’s really in charge.

If you have a horse, un­less you’re a very rich person with minions, there’s a lot of mucking out to do. It’s called mucking out because horses used to live in stables, but now they’re free-range, and technically it should be called mucking off. Whatever, mucky it is, and over a large paddock instead of a small stable. I know what you’re thinking. I thought it myself once. If horse dung is good for the garden, why not just leave it where it falls so that it can do good for the grass? Well, it appears that concentrated piles of horse manure left sitting on the grass turn it sour, and although the grass eventually grows green and lush in those places, the horses won’t eat it.

And thus, with a kind of emissions trading scheme, I’m able to offset the vice of equestrian activity with the virtue of homegrown organic vegetables. Isn’t nature wonderful?