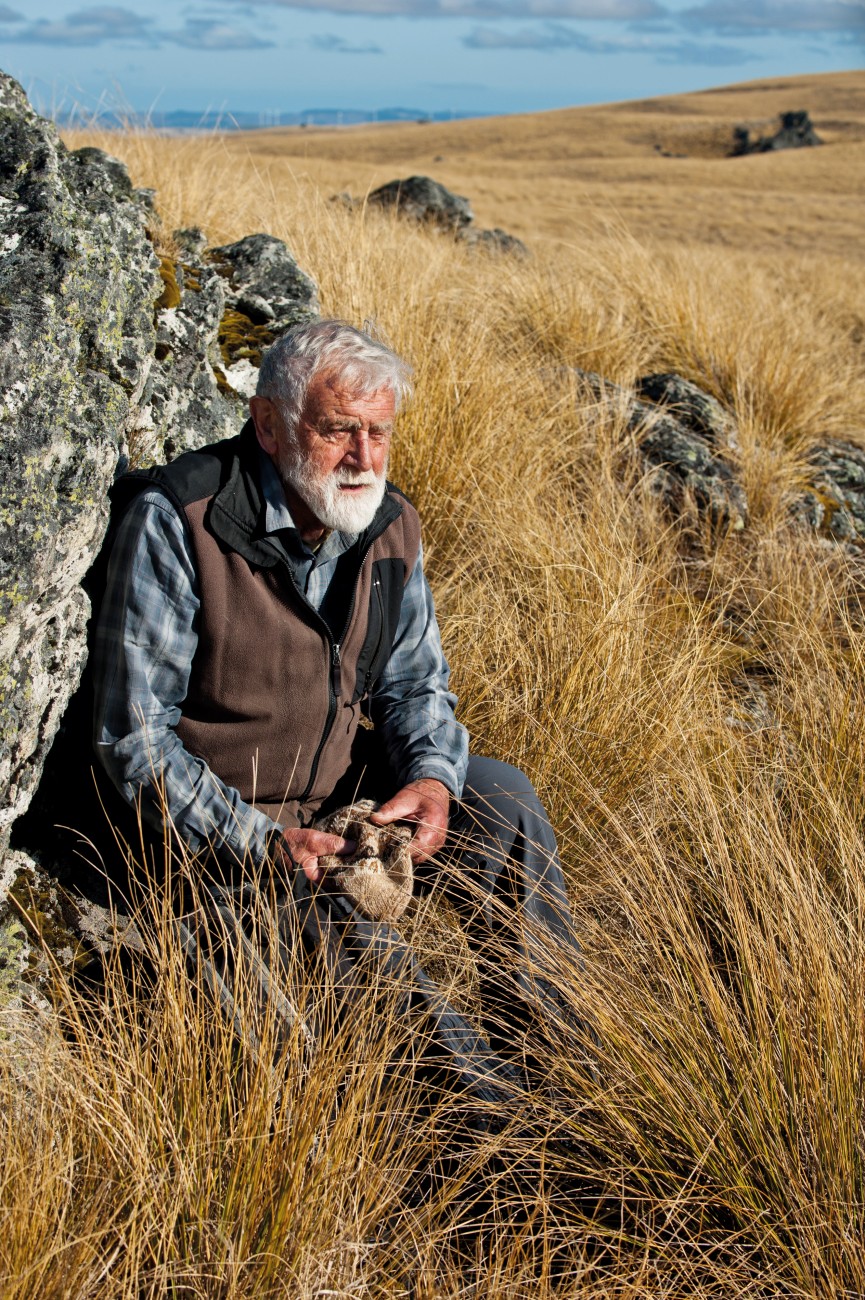 Sir Alan Mark has just published a memoir of his long life in botany and environmental action called Standing My Ground: A voice for nature conservation. There’s probably no pun intended, but the ground he stands on and stands for is literal: he has been one of this country’s staunchest defenders of the living land, the soil and what grows in and on it.

You cannot talk to Mark for more than a few minutes before the words “snow tussock grasslands”—his specialist field—tumble from his lips.

And just the way he says it, his delight in these quintessentially New Zealand habitats, transports a person to backcountry uplands where tawny mops of tussock are bowing to a nor’wester, or standing rimed with ice and stiff as wire on a winter’s morning.

I ask him about early influences and experiences that shaped his conservation ethic. “It was pretty serendipitous, really,” he says. A family that enjoyed the outdoors, a father who took him deer shooting in the Blue Mountains when he was nine—standard influences on a child of the 1930s and ’40s.

He recalls a sight that disturbed him as a boy: walking to primary school in Dunedin and passing the Roslyn Woollen Mills spewing dyes into a local stream, rendering it lifeless. The emotional reaction to an ecological wrong—early seeds, perhaps, of the conviction that would see Mark stand against one of the country’s grandest and most egregious engineering schemes: the raising of Lake Manapouri.

Every life has its unexpected turns. Mark was to have gone to Lincoln to pursue agriculture, but the family couldn’t afford it, so he stayed in Dunedin and took botany at Otago University. Staff were welcoming and took a personal interest in students. There were field trips to the Central Otago mountains and projects in Fiordland National Park.

No one who spends time in Fiordland can avoid being branded for life by nature’s beauty, I suggest, and he agrees.

Eminent geologist and ornithologist Sir Charles Fleming impressed the young Mark for his outspoken advocacy for New Zealand’s flora and fauna. Government scientists of the day were constrained by the terms of their employment over what they could say in public, “but it didn’t seem to affect Charles,” he says. “He wrote an influential essay in The Listener, ‘Mammon on the Mamaku’, criticising the Forest Service for logging that magnificent podocarp-broad- leaved rainforest.”

The political muzzling of scientists continues to this day, and it worries Mark. “We’ve got so many major issues confronting us right now, and there are only a limited number of government scientists who seem able or willing to speak out on matters like climate change.”

He has had experience of the problem, being warned by colleagues that his conservation advocacy might cast doubt on the impartiality of his testimony as a scientist before such forums as the Environment Court.

In the early 2000s, when high-country burning and grazing was a contentious issue in the media, Mark made the case that it was vital to nurture tussock grassland after a fire to allow it time to recover. Standard farming practice was to graze it immediately.

“There was a trenchant exchange of opinions,”he says.“But some of the country’s most knowledgeable scientists in Landcare were told by their superiors not to speak out on high-country management matters. I thought that was a terrible indictment. It left me the only ecologist talking about sustainable management of the high country.”

It was the idea that humans could modify nature with impunity, even in a national park, that became the spur for Mark’s sustained opposition to the raising of Lake Manapouri for hydroelectricity.

“What really riled me was some senior engineers of the day saying that when they raised Manapouri they would be improving on nature. I thought that was the height of arrogance. They seemed to think that you could raise the level and restore the status quo, and it just seemed naïve to me to think that the ecological complexity of the natural shoreline could be restored at any higher level. It was pie in the sky.”

I ask him what he thinks is the Manapouri of today, and he says “in terms of urgency and global importance, it’s climate change”. He thinks the public is alert to its seriousness, as shown by the fact that when the government produced a discussion paper earlier this year and gave the public less than a month to respond, 15,600 submissions came in.

“But a lot of people see it as an issue for future generations and not for us,” he says. “We’ve still got deniers in our midst, and that doesn’t help the situation. And government isn’t giving us much in the way of leadership. When they replaced their fleet of limousines recently, what did they buy? Thirty BMW diesels. They could have set an example and bought some electric cars.”

I mention the new movie The Martian, in which Matt Damon plays a botanist left behind on the red planet when a space mission goes wrong. Could we see a surge of enrolments in botany degrees? “I’d like to think so. We botanists still have an important role to play. All flesh is grass, everything depends on plants, and we need to cherish the amazing collection we have in New Zealand.”