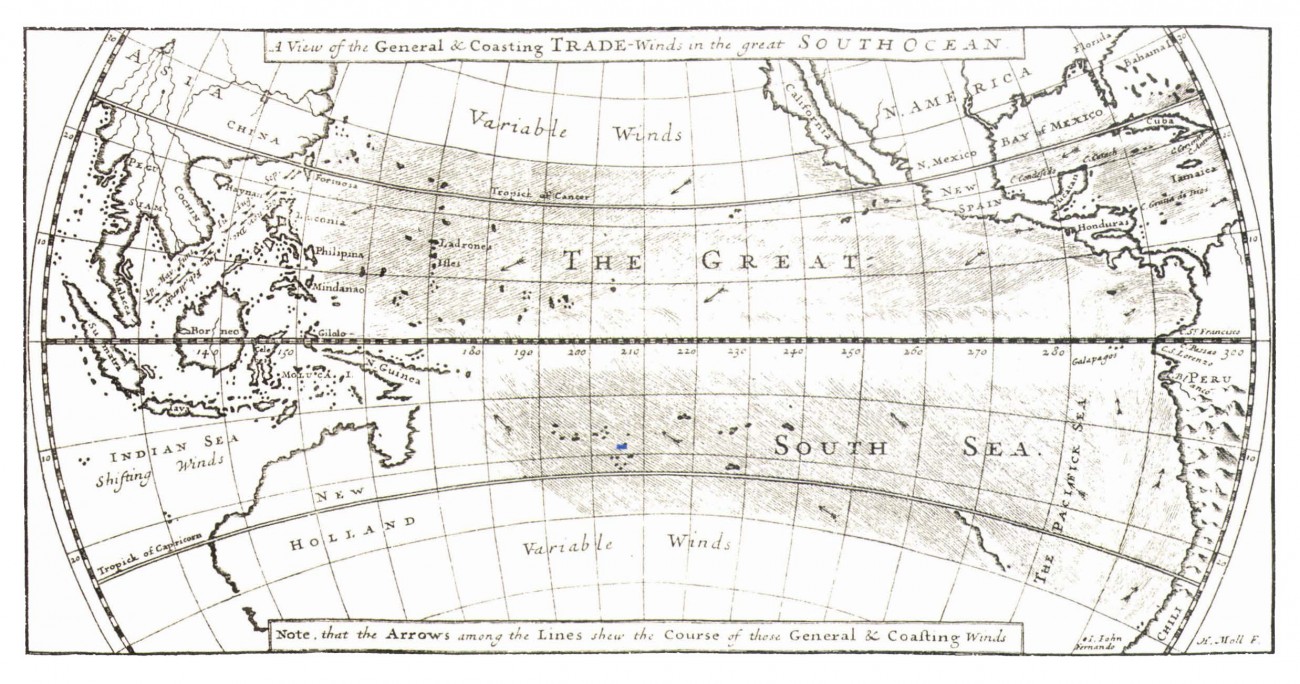 In 1579, off the coast of Peru, as the Golden Hind bore down on Nuestra Senora de la Concepcion, straining under full sail but dragging a sea anchor to disguise her speed, gold and silver were not the only plunder on Francis Drake’s mind; he was also after knowledge.

The Pacific Ocean may have become his oyster, but Drake could not open it without pilot’s navigation books detailing winds, currents and coastal hazards. During one attack, Drake had even captured a pilot then forced him to sail with them for months. Once released on the coast of Mexico, the pilot was taken prisoner by the Spanish inquisition and tortured so that the authorities could reassure themselves that he really had gone with Drake against his will.

The information Drake gained was so valuable that he taunted the Spanish commanders with his new charts before releasing them so that they would carry back to the vice­roy the news that the Pacific was no longer a Spanish lake but would be open to a succession of English captains—pirates to one side but heroes to the other.

As England’s prolonged struggle with Spain, and later France, spread over the oceans of the world, there was an explosion of scientific knowledge brought back by sailors that prefigured—in a modest way—the scientific advances seen during the wars of the twentieth century.

Greatest of the explorer-scientists was the pirate Sir William Dampier (1651-1715), whose knowledge of weather and navigation became so highly regarded by his fellow sailors that on one occasion when a pirate band broke up, they almost fought over which group would take Dampier.

Aside from matters pertaining to the navigation and safety of his ships, Dampier was also an assidu­ous observer of flora, fauna and ab­original life. Preserving his copious notes and drawings was extremely difficult in the sometimes-desper­ate circumstances Dampier’s career choice left him in. His solution was to pack his notebooks into a large bamboo tube sealed with wax at both ends. This proved effective, even swimming flooded rivers when crossing the isthmus of Panama dur­ing the wet season.

After his first circumnavigation of the Earth, a rambling journey that took twelve years on a number of different boats, Dampier published several books in 1697 and 1699 describing his travels and all that he had seen.

His meteorological work alone was groundbreaking. Based on his own observations, supplemented with what he gleaned from other mariners, Dampier produced the first map of the winds across the Pacific Ocean. He discussed in de­tail the variations in the trade winds around the world and across the seasons. His map correctly showed that, in the Pacific, the boundary between the southeast trades and the northeast trades lay not on the equator but about 5 degrees into the northern hemisphere.

He coined the terms sea-breeze and land-breeze and detailed their behaviour in different places. He described the way the monsoon rains migrate from the Northern to the Southern hemisphere follow­ing the sun and the reversal of the winds associated with this.

He was also the first to describe many different ocean currents such as the Gulf Stream, the Benguela Current, the Peru Current and the monsoon currents of the Indian Ocean as well as correctly deduc­ing the role of the wind in causing them.

His descriptions of hurricanes and waterspouts were the most detailed published in English and he recognised that the hurricanes of the Caribbean were the same type of storm as the typhoons of the northwest Pacific. His accounts of plants and animals and their differ­ent uses by people round the world were encyclopaedic in their detail.

His recognition that animals in some parts of the world were subspecies of animals elsewhere opened a philosophical door that Darwin would walk through more than a century later, acknowledging Dampier as he did so. Dampier’s work greatly influenced later scien­tist-explorers such as Alexander von Humboldt, Joseph Banks and Cap­tain Cook, who carried copies of his books on the Endeavour when he first sailed to New Zealand.

Dampier’s books were a popular success and reprinted repeatedly. They set a trend for travel books that lasted decades and fired the imagination of writers such as Dan­iel Defoe and Jonathan Swift whose novels Robinson Crusoe and Gulliv­er’s Travels were partially based on incidents in Dampier’s books.

More than that, as the first to describe life and customs of many countries around the world, Dampier introduced a raft of foreign words to the English language, such as avocado, barbecue, breadfruit, cashew and chopsticks. The Oxford English Dictionary credits him in over 1000 entries.

Embraced by the literary world, as well as the savants of the Royal Society, Dampier became a success and something of a celebrity.

His new popularity lead to a commission in the Royal Navy to command the Roebuck on a voyage of discovery to Australia, which he had briefly visited during his first circumnavigation. This voyage was only a qualified success as Dampier was not a great commander of men—especially those jealous of the success of a former pirate. On the journey home the aged and worm-eaten Roebuck began to leak badly and was wrecked on Ascen­sion Island. Once rescued and returned to England, Dampier was harshly court-martialled for alleged failures of command.

After a book covering his voyage on the Roebuck Dampier, at the age of 52, returned to pirate ventures. War having broken out again with Spain and France, privateering was once more legal and a business consortium backed Dampier in an attempt to capture Spanish treas­ure ships, either in the Atlantic or the Pacific. The expedition failed, partly through Dampier’s leadership shortcomings, but he did achieve a second circumnavigation.

As the war continued, Dampier, undaunted, though now 57, man‑aged to organise another voyage. This time he was not captain but pilot. Although plagued by troubles, the expedition struck good for­tune, capturing one of the Manilla galleons and returning Dampier to England as the first man to circum­navigate the world three times. Unfortunately, legal disputes held up Dampier’s share of the plunder until two years after he died.

In many fields, Dampier’s achievements shone brightly for several generations and although his reputation may have faded during the last century, he is still remembered as a gifted natural sci­entist, forced to take a day job as a pirate because there was no money in science.