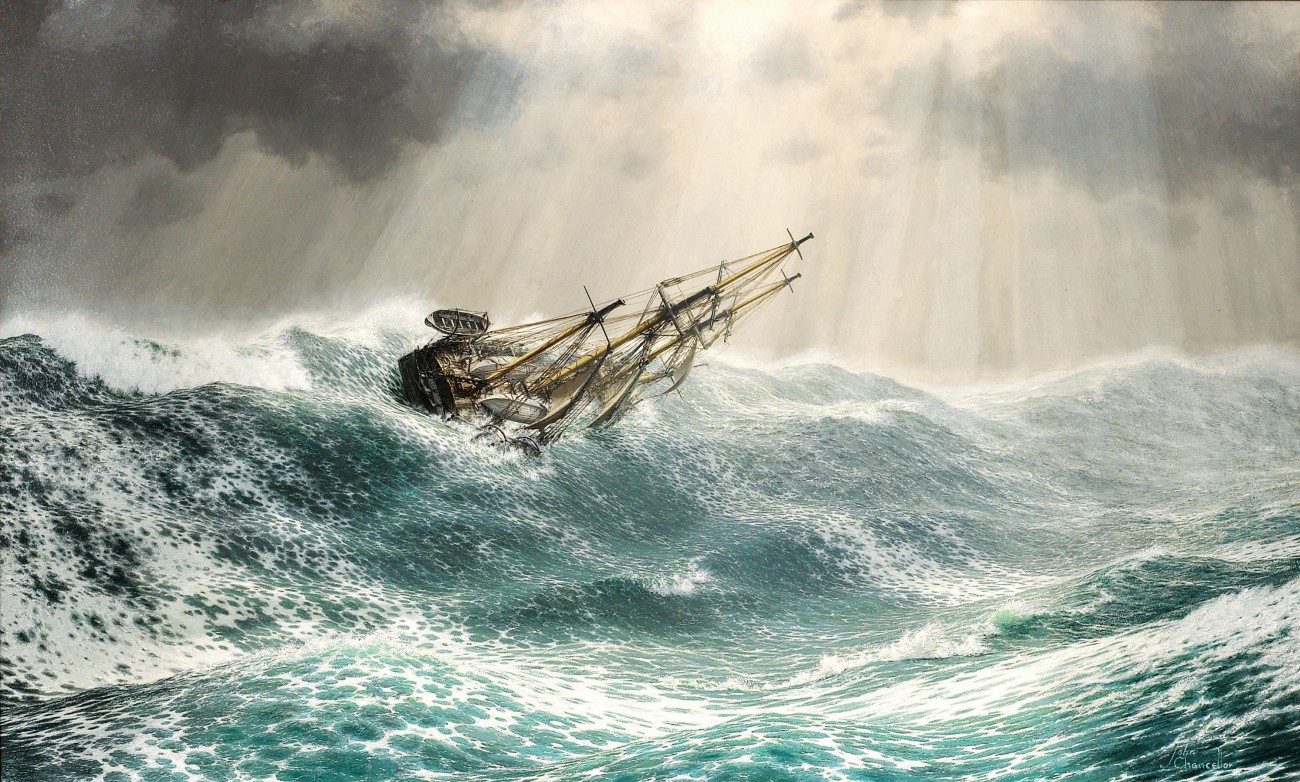 Robert fitzroy is famous to most as the captain of the Beagle during the voyage on which Darwin made his discoveries, although many New Zealanders also know him as the Governor of New Zealand before George Grey. To meteorologists, FitzRoy is famous as one of the pioneers of weather forecasting. In fact, FitzRoy coined the term “weather fore­casting” mainly to disassociate his work from prophecies of an astrological nature. He was also a superb navigator and surveyor whose charts of South America were still in use more than 100 years after he made them.

FitzRoy’s career got off to a strong start at 14 when he topped his class at the Royal Naval College. After four years at sea as a midshipman, he was the first candidate ever to pass the lieutenants’ exam with perfect marks. Aged 23, he was given command of the Beagle, assisting Captain Phillip Parker King in surveying the coast of South America. A few months later, off Patagonia and hurry­ing to a rendezvous, he ignored the danger signs of a plunging barometer and threaten­ing sky, with fatal consequences. A violent pampero wind caught the Beagle with too much sail up and threw the vessel on her side. Topmasts and jib-boom were blown away, along with two sailors, who drowned.

FitzRoy ordered the dropping of both an­chors, which righted the Beagle and pulled her head into the wind, saving her from foundering. But while he was praised for his seamanship in saving the vessel, FitzRoy felt he should have better anticipated the sudden onset of the gale.

The coastline of Tierra del Fuego and the Magellan Straits proved so complex that eventually the survey was broken off and the expedition returned to England. It was re­sumed the following year, upon the urging of the navy hydrographer, Captain Francis Beaufort (now known for the Beaufort Scale for measuring wind strength), and FitzRoy was ordered back to South America.

He took Charles Darwin, a gentleman naturalist, as a companion. Constrained from conversing freely with officers under his command, FitzRoy hoped Darwin would mitigate the loneliness of his position on such a long and stressful expedition. (The previous commander of the Beagle had commit­ted suicide after a breakdown.)

The voyage lasted from 1831 to 1836, was hailed as a triumph, and FitzRoy was honoured with the Gold Medal from the Royal Geographical Society. But with the publication of On the Origin of Species, late in FitzRoy’s life, the voyage eventually be­came more famous for finding evidence for the theory of evolution. FitzRoy resented this bitterly. By that time his religious views had hardened into a literal interpretation of the Bible, and he argued that all he had seen only confirmed that Earth had developed after an extensive flood. Darwin famously retorted, “It is a pity that he did not add his theory to the extinction of the Mastodon from the door of the Ark being made too small.”

In 1841, FitzRoy was elected to Parlia­ment and two years later was offered the po­sition of Governor of New Zealand. Backed with few troops and little money, the job was a poisoned chalice. He arrived in time to adjudicate the Wairau massacre, finding that the New Zealand Company settlers had no right to try to arrest Te Rauparaha, but that Te Rangihaeata was wrong to have ex­ecuted the prisoners taken in the affray. This pleased nobody. The settlers were infuriat­ed, while Te Rauparaha sent a message say­ing that FitzRoy should not trouble sending soldiers to find him at Waikanae as he’d be happy to turn up in Wellington with a thou­sand warriors on any date FitzRoy cared to name. In less than two years, political allies of the New Zealand Company engineered FitzRoy’s recall to England while the settlers in Nelson burnt him in effigy.

FitzRoy’s voyage home was notable for a storm he forecast when the ship was an­chored for the night in calm weather in the Magellan Straits. Both of FitzRoy’s barome­ters were falling fast but the captain ignored his warnings and retired below deck. FitzRoy persuaded a young officer to put out a heavy anchor on a heavy chain. When the storm struck at 2am, the heavy chain broke but tangled around the lighter chain. This saved the ship from crashing into sheer cliffs and losing all lives onboard.

It was these encounters with storms at sea that led FitzRoy to weather forecasting, and the opportunity to develop his ideas came in 1854 when he was appointed Meteoro­logical Statist to the Board of Trade. Initially tasked with compiling weather statistics for each part of the globe from ships’ logs, he took advantage of the invention of the tele­graph to initiate forecasting. He established a network of early prototype weather stations around the coast, each with an early stand­ard barometer and thermometer. Readings were telegraphed to FitzRoy’s office every morning and within hours a forecast would be telegraphed back. If FitzRoy thought a storm imminent, warning symbols of drums and cones were displayed from a mast.

The storm warnings proved both success­ful and popular, but they were not infallible. FitzRoy also sent forecasts to the daily pa­pers. Whereas his storm warnings were dis­played as soon as the telegram arrived, the newspaper forecasts usually took another 24 hours to appear, by which time conditions could have changed radically. The newspa­pers that ran his forecasts also became some of his strongest critics.

In 1863, FitzRoy published his Weather Book, which included his theories on how wind patterns and storms evolved, advice on how to use a barometer and a litany of hor­ror stories of ships wrecked in storms.

FitzRoy was working 13 days a fortnight to improve his forecasts, but criticism of his methods and results came to a head in Parliament in 1865. FitzRoy had a nervous breakdown and, on 30 April that year, bolted himself in a bathroom and slit his throat.

FitzRoy was born rich but died poor, having expended much of his wealth ad­vancing his work. A collection was taken up for the support of his widow and chil­dren. Notable among the contributors was Charles Darwin, who praised FitzRoy as “an ardent friend to all under his sway”.

The storm warnings issued by FitzRoy’s staff were discontinued but soon reinstated by public demand. They remain his great­est legacy. Another testament to his abilities is the number of people who served under him on the Beagle who went on to distin­guished careers.

Today, FitzRoy is enshrined in the name of one of the sea areas in the British marine forecasts, a mountain in Patagonia and nu­merous streets in New Zealand.