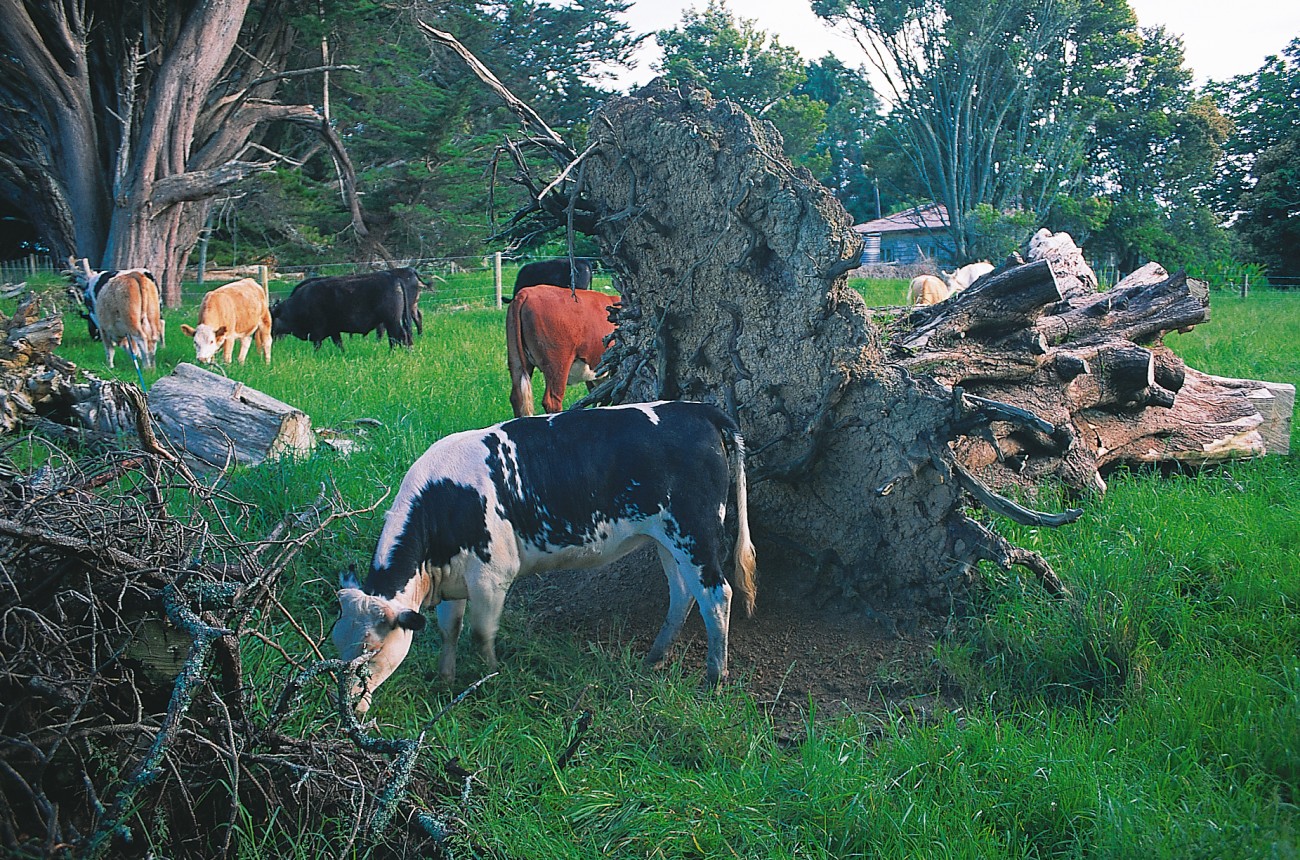 As we glide from one millennium to the next, the weather is still busy breaking records.

The November 1999 rains in Fiordland and Otago brought Queenstown its highest total rainfall for a three-day period, as well as its highest monthly total, and Lake Wakatipu rose higher than ever before in the century.

Yet as we pass this special mark on the calendar, it is an opportune moment to reflect on great storms of the past.

My candidate for New Zealand’s storm of the century is the cyclone that crossed the North Island in February 1936 (see New Zealand Geographic 33). It was notable not so much for any individual records it broke, but for the wide­spread nature of the damage. It brought every major river in the North Island into flood, cutting roads and railways in hundreds of places. Wind damage was phenomenal over much of the North Island, as well as in Marlborough. Hundreds of thousands of trees came down, and hundreds of buildings were damaged. Many churches and commu­nity halls were destroyed in Taranaki, Wanganui and Manawatu. The wind even blew a couple of trains off the tracks, one south of Palmerston North and the other in the Wairarapa. The interisland ferry Rangatira was driven onto the rocks of the Wellington south coast and very nearly sank, and the wind carried tropical birds to New Zealand from the Kermadec Islands.

So much for the storm of the century. But what about the storm of the millen­nium—what evidence do we have for that? Plenty, according to Patrick Grant, in his fascinating book Hawkes Bay Forests of Yesterday. Grant has spent years studying the trees of Hawkes Bay, and has acquired unparalleled knowledge of the ages of the various stands based on analysis of growth rings from cores drilled into the trees.

He has also studied fallen trees that have been buried underground for centuries. Some, such as totara and matai, often remain in good condition over such a period, and have been used for fenceposts and firewood ever since the ploughs of the early settlers first smashed into them.

Even once the trees have vanished, the landscape may show the scars of their demise. When a large tree blows over, its roots pull up a lot of soil, leaving a pit in the ground. As the tree decays, the roots drop the earth in a mound next to the pit. The orientation of the pit and the mound shows the direction of the wind that blew the tree down.

Patterns of pits and mounds can be seen on the grassy hillsides of many farm paddocks. If the pits and mounds all line up in the same direction, it is likely they were all made at the same time by trees blown down by the same storm. Pits and mounds can also be found in the forest, covered by new growth. If all the new trees are the same age, this gives a clue to the date of the storm that flattened the previous forest.

Alternatively, buried tree trunks can be carbon-dated to ascertain when they were blown down. Using this sort of information, Grant has identified a period between 1280 and 1400 A.D. when the weather was particularly stormy and gales flattened hundreds of thousands of trees in Hawkes Bay. There are signs in many places that the fallen timber eventually burned, probably in fires started by lightning strikes.

Widespread accelerated erosion occurred at this time, depositing deep layers of shingle in the river valleys. On the other side of the ranges, this was also a time of active sand-dune encroachment in Manawatu and Horowhenua.

In the wider Pacific, home of some of our ancestors, severe storms are a regular hazard, with ty­phoons and tropical cyclones reaching intensities not encountered in this country.

Representative of the worst of these was the typhoon that struck the atoll of Pingelap Atoll, north-west of Nauru, around 1775, killing 90 per cent of the island’s population of nearly 1000.

Since the highest point of the atoll is less than three metres above sea level, the whole island was swept by the sea, and all vegetation destroyed. With no coconut palms, breadfruit or banana trees left, many of the survivors starved to death.

The population was reduced to around 20, including the hereditary chief. This population “bottleneck” had an interest­ing consequence, as at least one of the survivors carried a gene for colour-blindness. Two generations later, many children were born colour-blind, as both parents by then carried the gene. Today, about 1 in 12 of the inhabitants are colour-blind, compared with 1 in 30,000 in the rest of the world. (An account of the phenomenon is contained in Andrew Sachs’ book Island of the Colour-Blind.)

Others of our forebears hailed from Great Britain, and one of the worst storms to affect that country in the past 1000 years occurred in December 1703. It was described by Daniel Defoe in his book The Storm: Or a Collection of the Most Remark­able Casualties and Disasters which Happened in the late Dreadful Tempest both by Sea and Land.

The Eddystone light­house near Plymouth was destroyed, and houses were blown down all across England. Enormous num­bers of trees were uprooted all over the country, and many ships were lifted beyond the usual reach of the tide, or wrecked on the coast or at sea, with the loss of around 8000 lives.

On a more bizarre note, most of the windmills in southern England were destroyed. The gale made their sails turn so fast that their wooden gears over­heated and caught fire.

Storms of this type also wrought havoc in Europe, causing sea floods or storm surges that drove the North Sea inland over the lowlands of Holland and Germany, drowning hundreds of thousands of people and carving out chunks of the coastline. In 1570, one storm flooded the great cities on the coast of Holland with an estimated loss of 400,000 lives. As a result of storms in 1240 and 1362, 60 parishes in the Danish diocese of Schleswig were “swallowed by the salt sea.”

Storms of this type also formed and enlarged the Zuider Zee in Holland (which was not drained until the 20th century), and reduced the island of Heligoland from over 60 km across in the year 800 A.D. to 1.5 km on its longest axis today.

My candidate for global storm of the millennium is none of these cataclysms, but rather a flood in China in 1332, estimated to have taken seven million human lives, as well as those of countless animals.

Additionally, this flood is seen by some historians as a possible trigger for the great bubonic plague known as the Black Death that swept across most of the Northern Hemisphere in the following decades, killing around a third of the world’s popula­tion from India to Iceland.

Bubonic plague was endemic in central Asia and China, carried by rat fleas. In the aftermath of the flood it is thought there was an explosion in the rat popula­tion. However, once the supply of carrion was exhausted, the rats radiated from the area, spreading the disease to other countries.

Could the new millennium bring anything as horrific as this? Let us hope not.