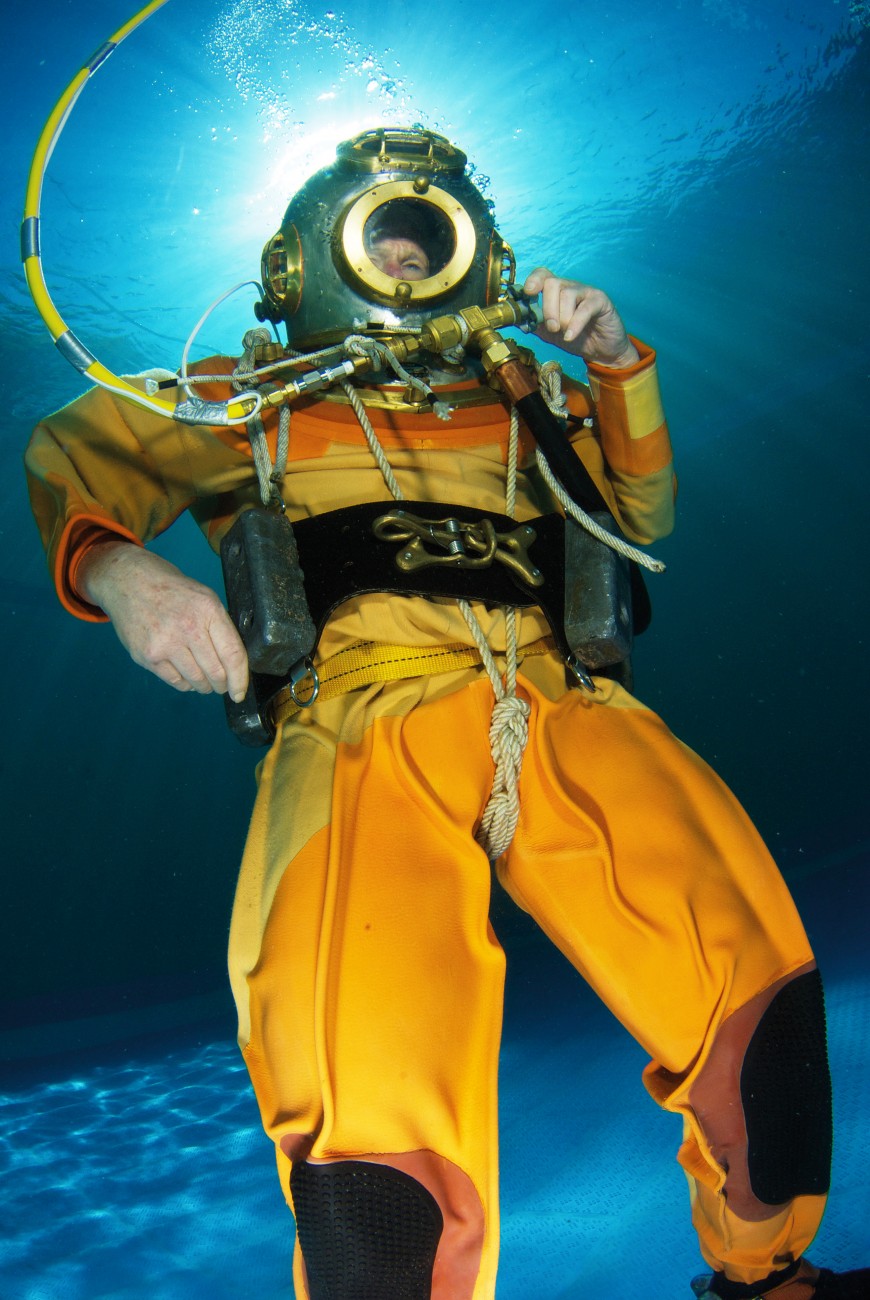 Divers have been dragging on regulators and sashaying around underwater in neoprene since the 1950s, but prior to this, diving was a clumsier affair. For nearly two centuries, divers were saddled with suits of heavy canvas twill, bolted to a metal breastplate, and sealed inside colossal brass or copper helmets. The diver would teeter to the water’s edge, dragging heavy lead-soled boots weighing as much as 8.5 kg and a lead belt about 30 kg, air hoses trailing behind. But once underwater, they were a moonwalking astronaut, free to wander the seafloor with an unlimited air supply pumped from above.

The first diving helmet was a huge step up from the diving bells of the previous two centuries. In 1827, the British engineer Augustus Siebe redesigned a firefighters’ smoke helmet, originally patented by the British brothers Charles and John Deane. The smoke helmet was made of copper attached to a flexible collar with a durable leather garment. As a diving helmet, it was held on the diver’s head with weights, but the opening could fill with water if the wearer bent over. Before long, Siebe sealed the canvas suit to create a watertight diving dress that ushered in a new era of underwater engineering, exploration and salvage.

The suit was hooked up to hand-powered pumps, driven by assistants on the surface with pistons and crank handles, with a large fly wheel to maintain a steady flow of air. To finish the dive or carry heavy loads to the surface, the diver would shut off the exhaust valve, allowing air from the pumps to inflate the suit and carry him to the surface. Over-inflating the early models would force the arms out perpendicular to the body—like a chubby scarecrow—and the diver could not reach the exhaust valve. A late variation included a knock valve on the side of the helmet.

Condensation on the faceplate was prevented by either the inflow of air positioned just above it, or an inelegant ‘spit cock’ valve from which the diver would draw in water and spit it onto the faceplate.

The set-up was not without its perils.

The cause of the bends—nitrogen bubbles forming in the blood through rapid ascent—was not understood until 1878. Divers could also become entangled in the air supply hoses, crimping them with their cumbersome boots.

In the nightmare scenario, a hose could break at depth and the sudden change in pressure could literally suck the diver’s body into the vacuum of the helmet. Death would be almost instantaneous, and the body would be pulverised.